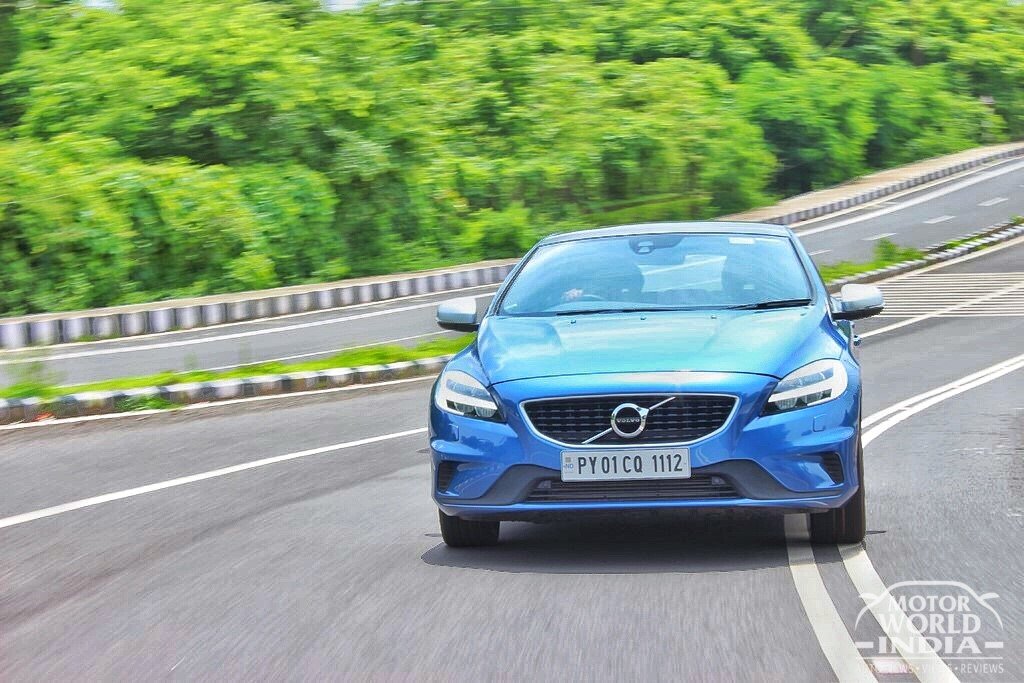 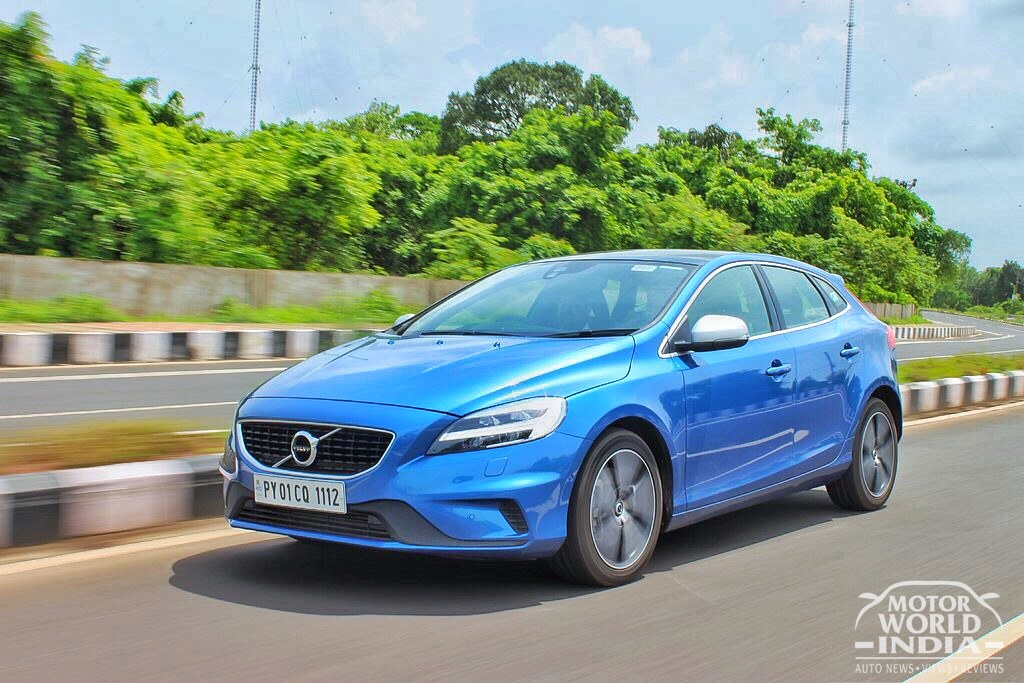 While the S90 and the XC90 are enjoying all the attention from the current Volvo India lineup, there was one sleek car that was launched by them late last year. One which competes with the Mercedes Benz A-Class and the BMW 1-Series. It is the Volvo V40! It is the longest and widest in it’s class and boasts of being the safest of them all too. We got an exclusive opportunity to drive the 2017 Volvo V40 facelift in it’s spec topping R-Design trim. Here’s what we felt after spending an entire day with it. 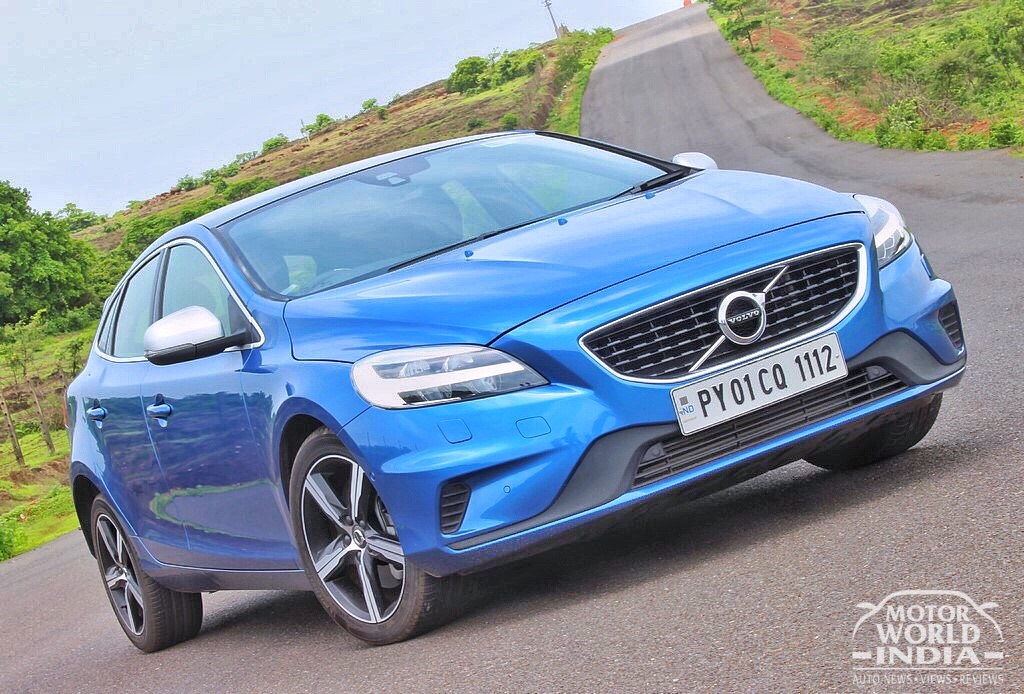 Food for Thought: The 1st generation Volvo V40 was launched in 1995 and was in production for nearly 9 years. The second generation car was called the V50 and was produced from 2004 to 2012. The third generation was called the V40 again and has been in production since 2012. As a part of the mid life update, Volvo launched the V40 facelift last year. The Volvo V40 is based on the Global C platform that also underpins the previous generation Ford Focus. It was also the first car from the entire product lineup to receive Volvo’s City Safety II back in 2012. 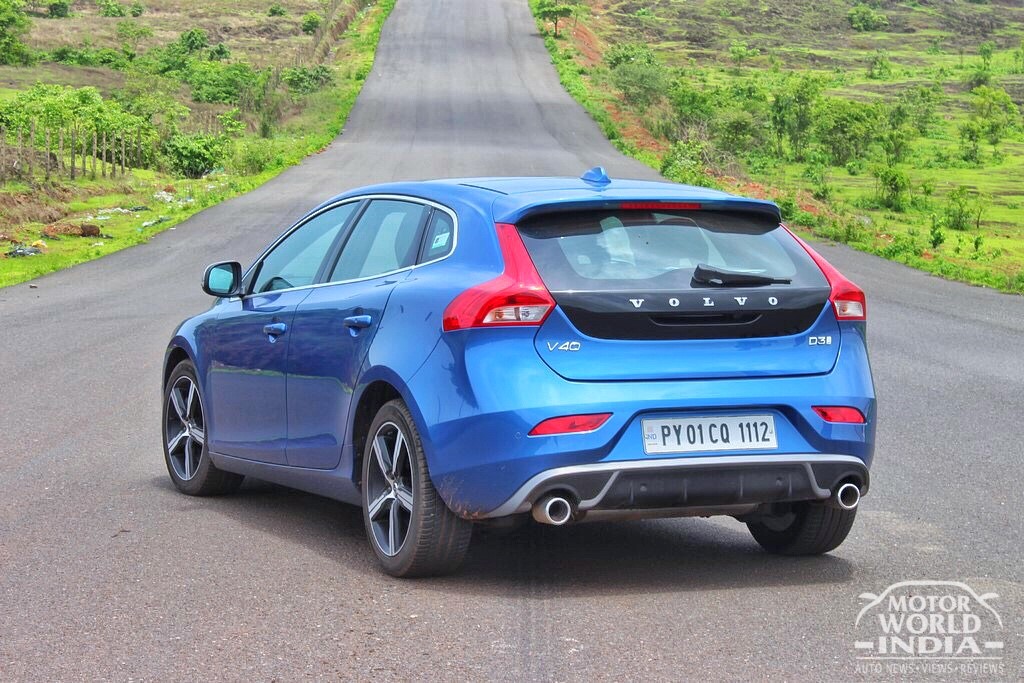 The 2017 Volvo V40 in the R-design trim looks ravishing. Spot it in a parking lot and you are sure to go head over heels, especially in this Bursting Blue paint shade. The facelift is characterized by the Thor’s hammer LED headlights that immediately let’s you know it’s a Volvo from miles away, but this R-Design variant gets its own sporty bits too like the 17-inch alloy wheels, front spoiler, silver ORVMs with matte finish, glossy black front grille, dual chrome tipped tailpipes and a rear diffuser as well. All this makes the V40 look a lot more aggressive and sexier at the same time. The sides again don’t see much of a change over the earlier model but we love the way the roofline swoops towards the rear. The rear is our favorite angle on this Volvo thanks to the dual tone tailgate and sleek LED taillights. 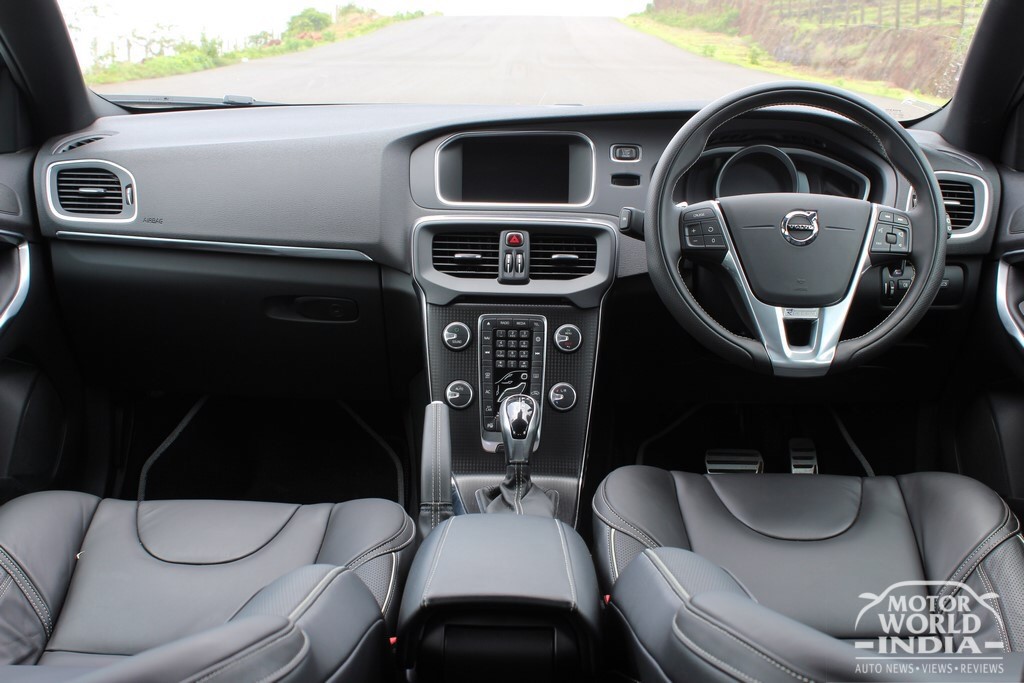 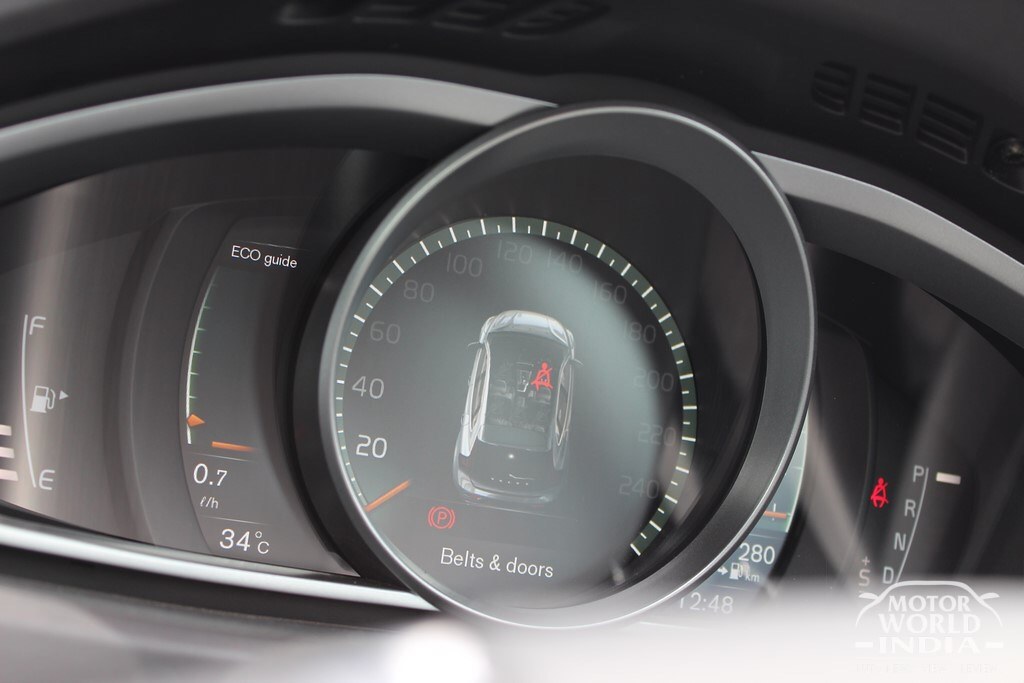 On the insides, the 2017 Volvo V40 R-Design comes with an all black interior that includes a Charcoal roofline as well. There is a fully digital instrument cluster that can be customized with different themes while there is a central infotainment screen that displays most of the car’s functions. The music system includes a Harman Kardon speaker setup that sounds great. The screen doubles up as the display for the rear camera, while the system can also play DVDs. Satellite Navigation is an optional extra and you do miss out on some essential features like Apple Car Play and Android Auto. The multifunction steering wheel also gets paddle shifters and an R-Design badge that looks upmarket. 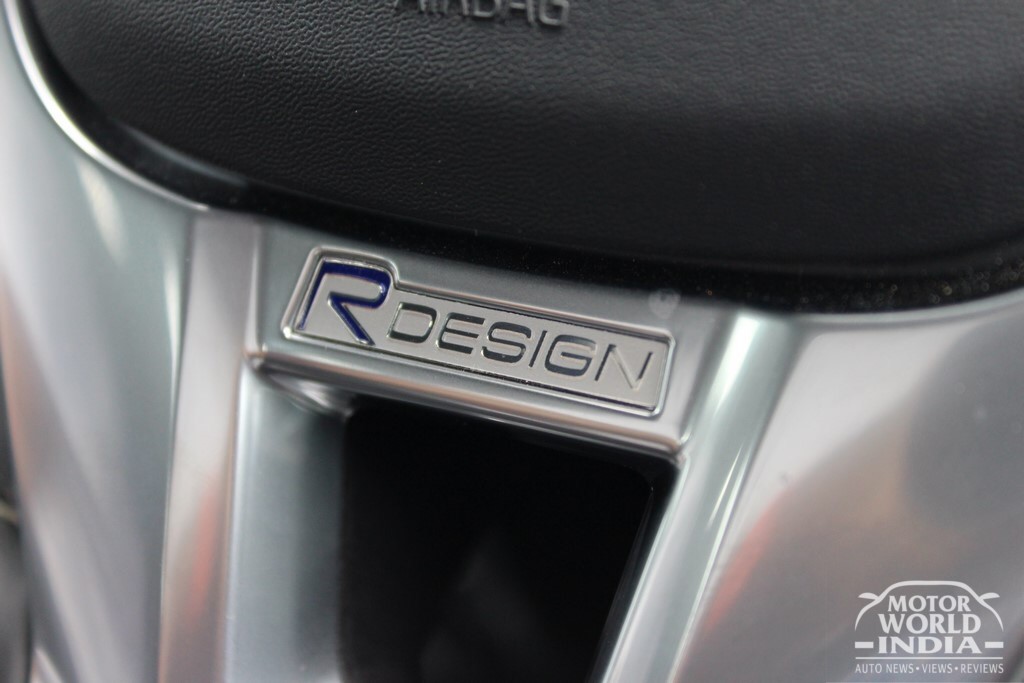 The R-design spec also gets you sporty features like Aluminium pedals, illuminated gear lever, ambient lighting, R-Design leather handbrake and aluminium inlays on the doors and dashboard. There is a dual zone climate control system to comfort you and a huge panoramic sunroof (fixed) on offer that adds greatly to the cabin’s ambience. The fixed glass roof also cuts out most of the heat thrown by the sun that helps maintain a comfortable cabin temperature. 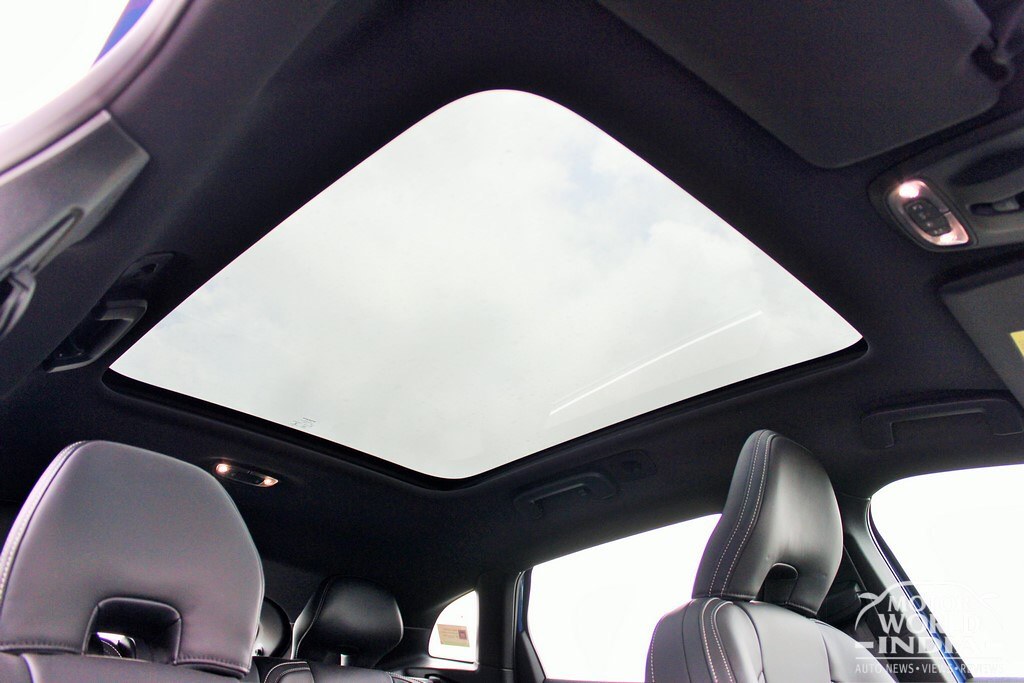 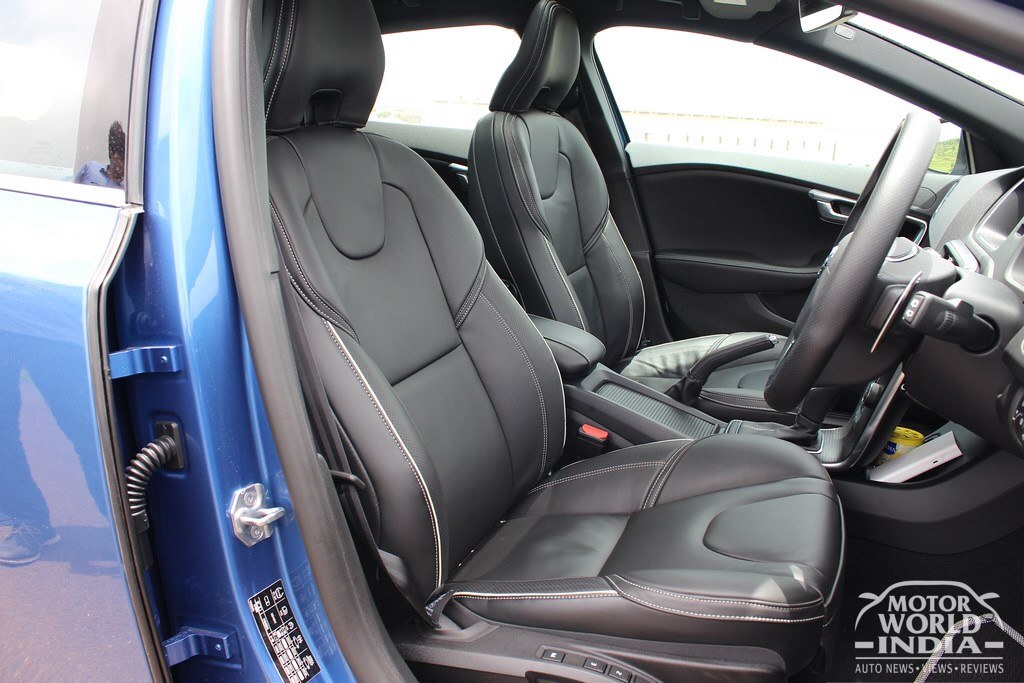 The seats on the other hand offer excellent comfort at the front and the rear with ample legroom as well. Both front seats are electrically adjustable and offer great comfort. The rear isn’t the place to be in if you are claustrophobic. Thanks to the small glass area and high window line you do tend to feel helmed in. Opening up the sunroof blind helps a lot here and we preferred to keep it rolled down throughout our drive. Finally, boot space is quite limited at 315 litres (considering it’s outer dimensions) and you get a space saver in place of a full size spare. But a finishing touch that we loved with the spare wheel is that Volvo also provides a pair of hand gloves in case you have to use the spare wheel. Damn you, OCD! 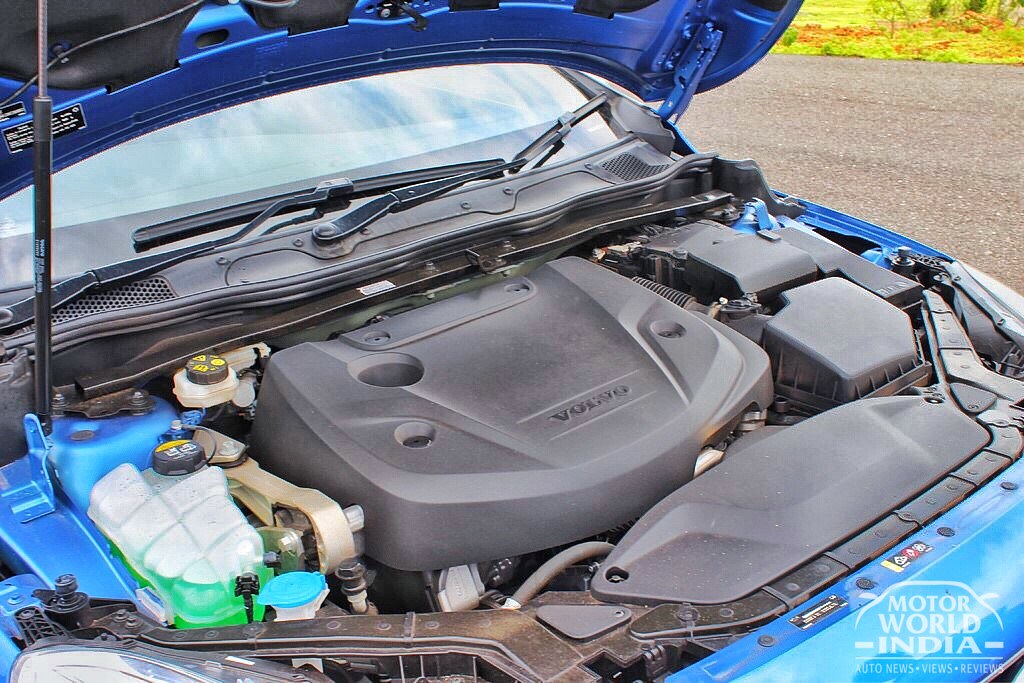 The Volvo V40 facelift is powered by a 2.0-litre Drive-E diesel engine in the D3 state of tune. This is the same engine that powers the S90 and the XC90 but in he V40’s case develops 150 HP and 320 Nm. The engine is mated to a 6-speed Aisin automatic gearbox that feeds power to the front wheels. To begin with, the engine feels quiet at idle, but rev it a bit and you know this is a diesel engine. In fact you continuously hear it but isn’t intrusive until you rev the nuts out of it. Also, the power delivery is such that you don’t need to rev it to the redline. The engine feels very responsive at low revs and it has a potent mid range performance as well. The 6-speed gearbox feels well matched to engine characteristics and offers smooth and seamless shifts. It’s only when you are in a hurry that the gearbox takes a while to downshift. Something that we loved is that in manual mode while using paddle shifters the gears do not upshift at redline unless and until you pull the right paddle. 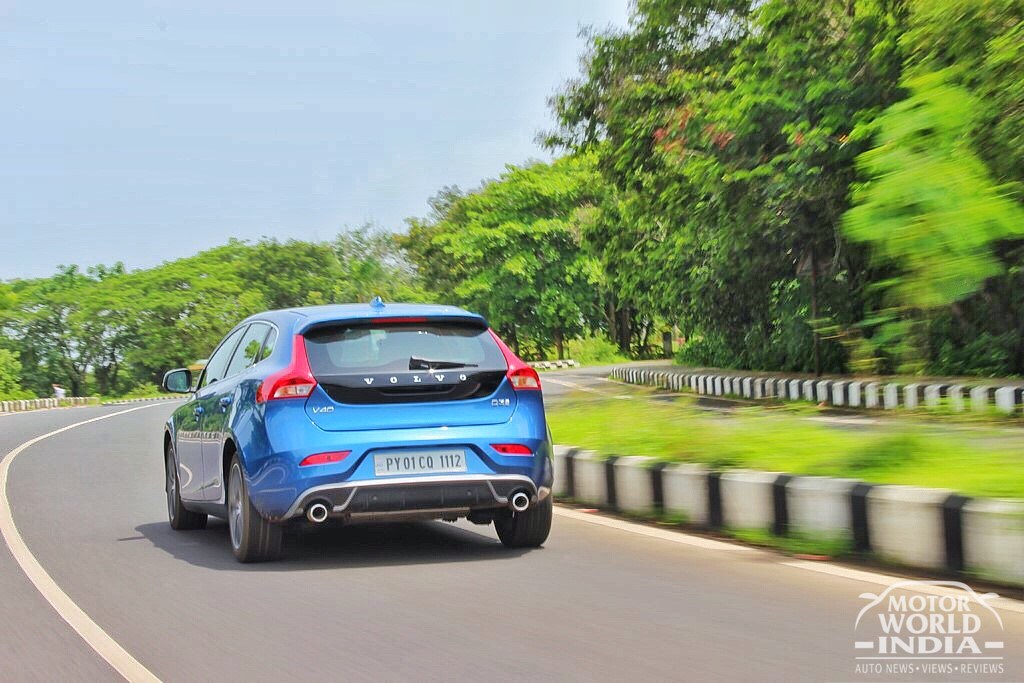 As mentioned above, the Volvo V40 is based on the same platform as the Ford Focus and you do feel some of that same Ford DNA when the drive the V40 as well. The chassis balance is superb and the car feels stable and secure at all times. Once you try to hoon this car around corners, you get a sense of connection with the car. It surprising how involving the car feels to drive. The steering offers good feedback and brake feel is decent. The problem lies at slow speeds. The R-design variant we drove comes with 10mm lower ride height and 45-profile tyres, and the total 133mm of ground clearance doesn’t really help. You have to baby the car over speed breakers and uneven surfaces thanks to the long front overhang. Otherwise you are sure to scrap some paint on the under belly. Overall, we were pleasantly surprised by the V40’s dynamics. They aren’t the best in class but we didn’t have anything to complain either. 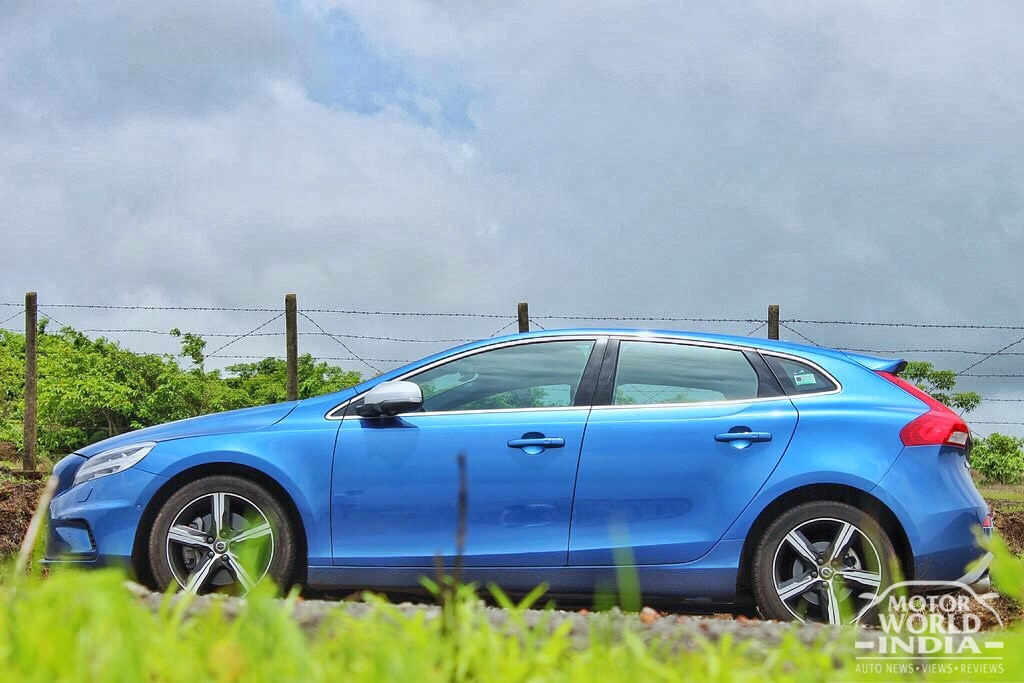 As is the case with every other Volvo, safety is the forte of the 2017 Volvo V40 R-Design. Apart from the essentials like ABS, airbags, stability control and traction control, the car comes with City Safety II, pedestrian protection system and Park Assist Pilot. City Safety is basically an auto braking function that uses LIDAR sensors which continuously monitor up to 6 metres ahead of the car. If the system detects any obstacle including cars, pedestrians or cyclists, the system will disengage the accelerator and engage the brakes fully, thus avoiding it or reducing the impact of the collision. The Volvo V40 comes with a pedestrian airbag too that helps reduce damage to the pedestrian in case of a collision. Park Assist Pilot is a auto parking system that detects a parking space and can automatically steer the car into it. All the driver has to do is engage the gear lever into Drive or Reverse. The system on the Volvo V40 works for parallel parking only. Some of the other features offered here are rear parking camera and a tyre pressure monitoring system. 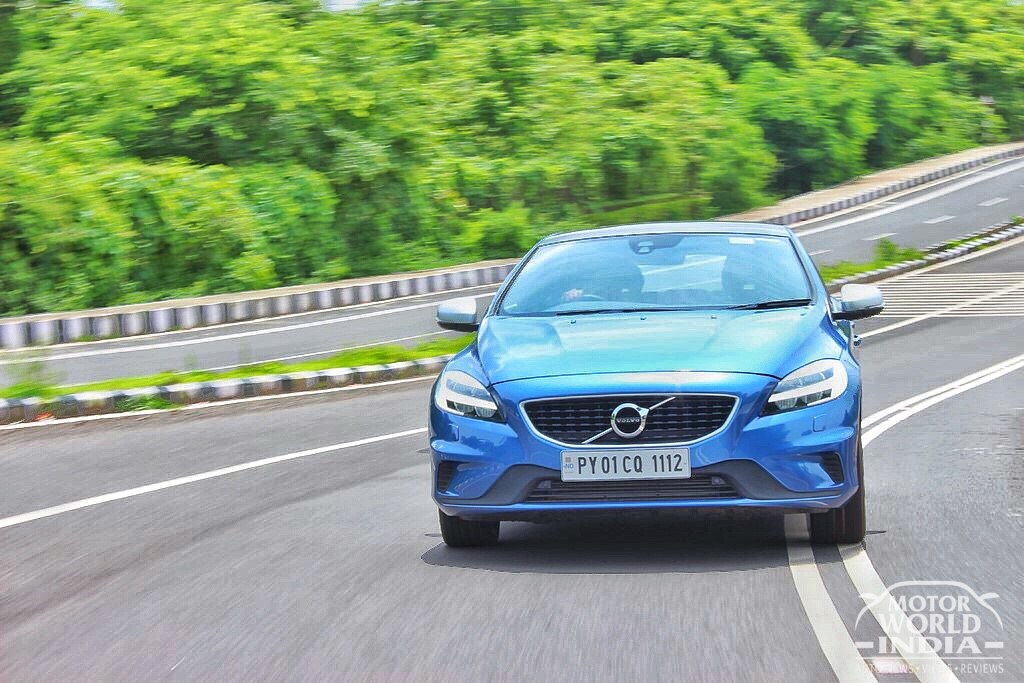 To sum it all up, the 2017 Volvo V40 is a car that keeps everything stylish yet simple. It looks attractively different and is yet practical on the insides. It does miss out on a few techy features and the dashboard design itself is a bit passe, but the car feels involving to drive. The 2017 Volvo V40 R-Design is the car for you if you cheer safety and simplicity, and want something different from the regular roast of premium German hatchbacks.

A special thanks to avid Motor World India reader Aniket Kenkre for lending us his Volvo V40 R-Design for an entire day. 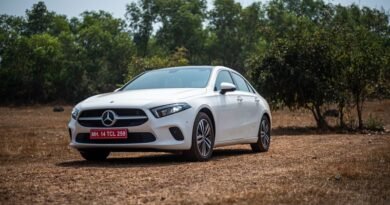 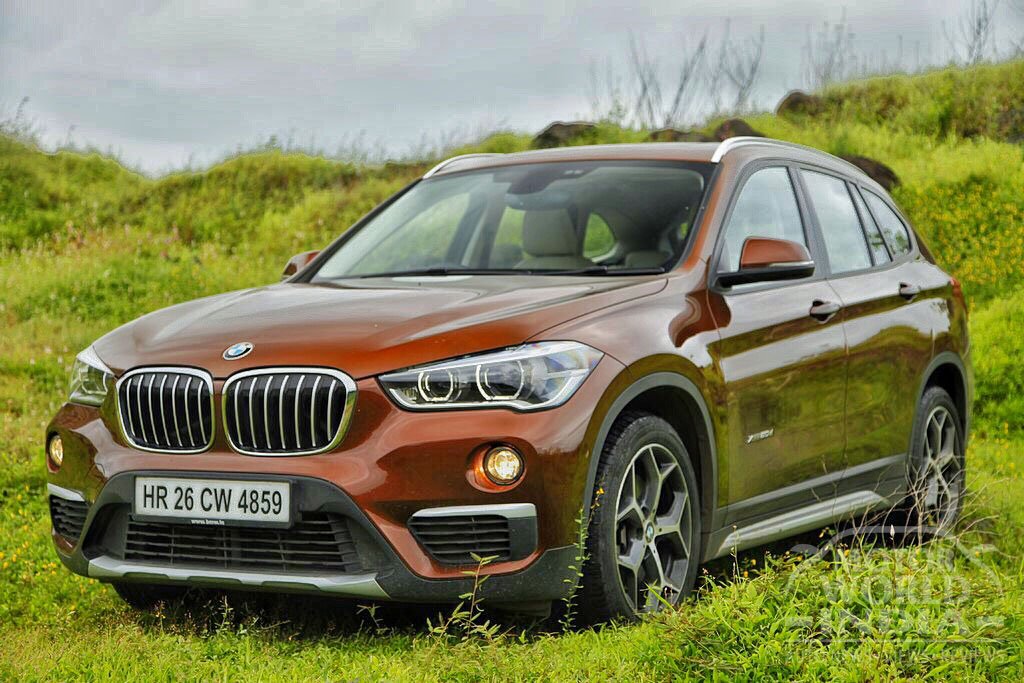 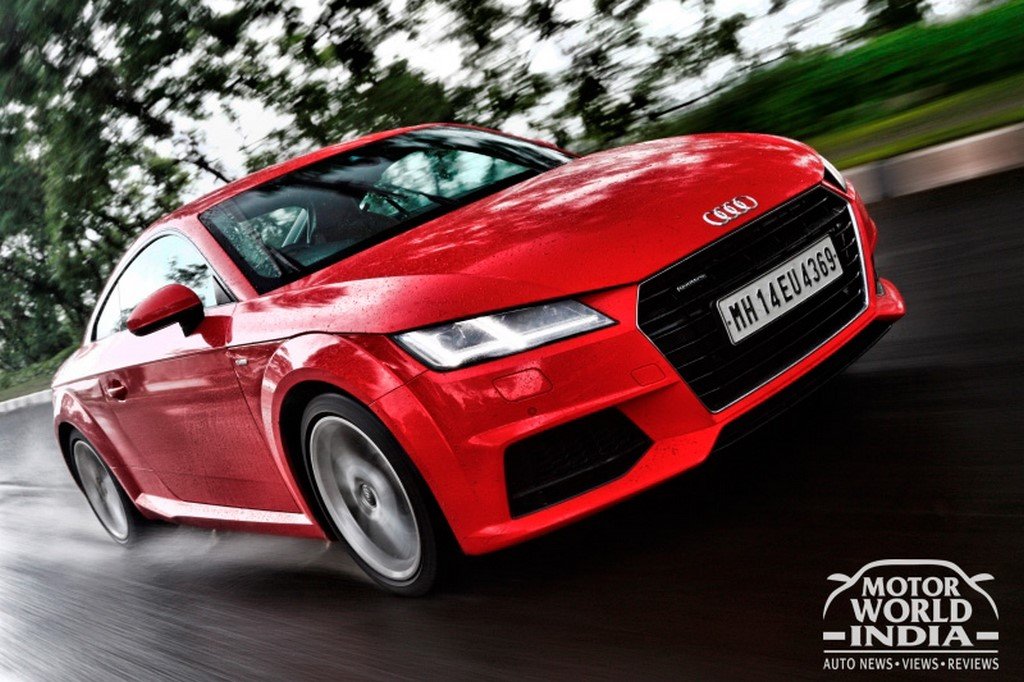