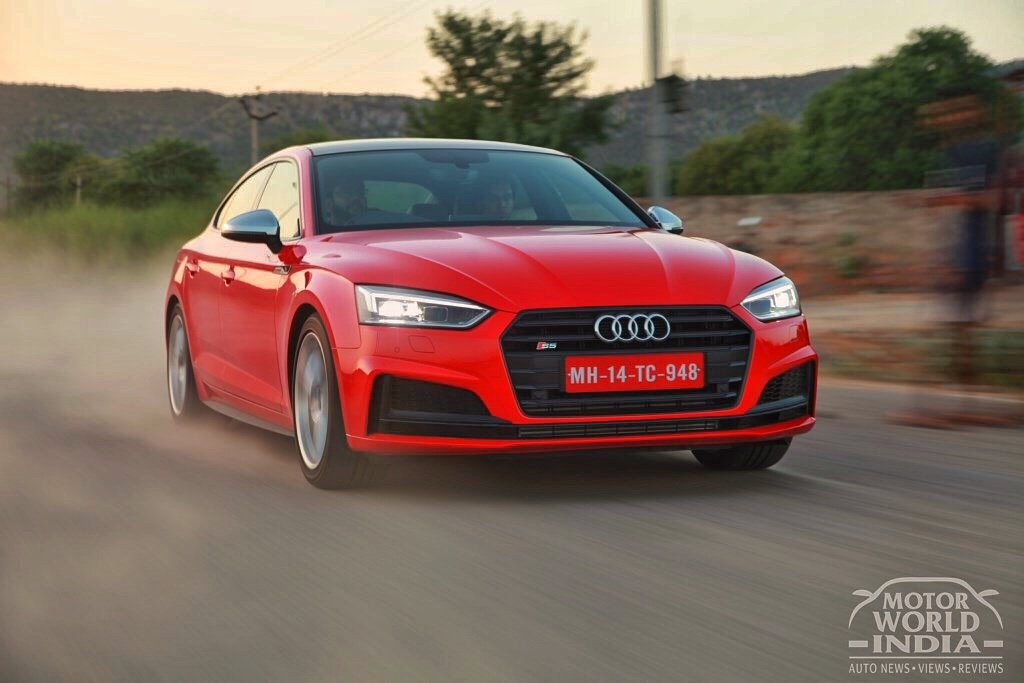 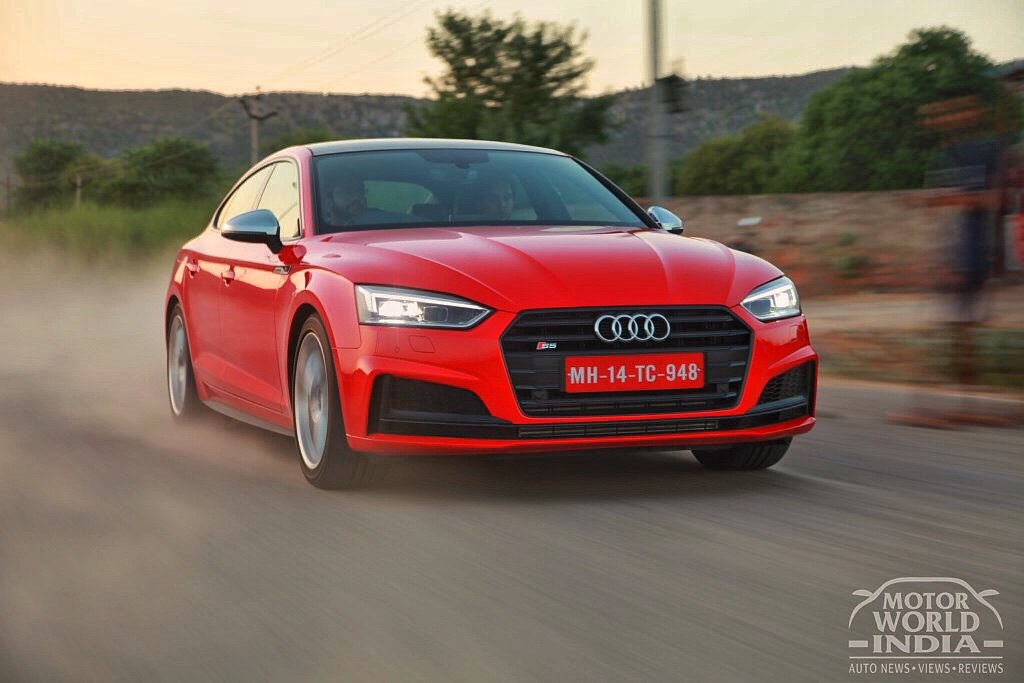 “2017 is the year to reload brand Audi in India”, this is what has been said proudly by Rahil Ansari, Head of Audi India. As Audi India flexes their muscles and expand their product portfolio, they add another car model between the A4 and the A6. The Audi A5 range, that also has the S5 and the A5 Cabriolet will be soon seen on Indian roads. We have driven the Audi A5 and the S5 on some enchanting roads in Jaipur to get you this detailed road test review of what Audi calls the A5 Brat Pack. Read on.

Food For Thought: Audi had announced the A5 in 2006, and it finally went into production in 2007. The A5 family currently consists of the A5 Coupe, Sportback, Cabriolet, the S5 Sportback, Cabriolet and Coupe, and the mighty RS5. The current A5 was unveiled in June 2016 and is into the 2nd generation now. The Audi A5 is based on the 9th generation Volkswagen MLB Platform. This platform is also shared with the Audi A4. 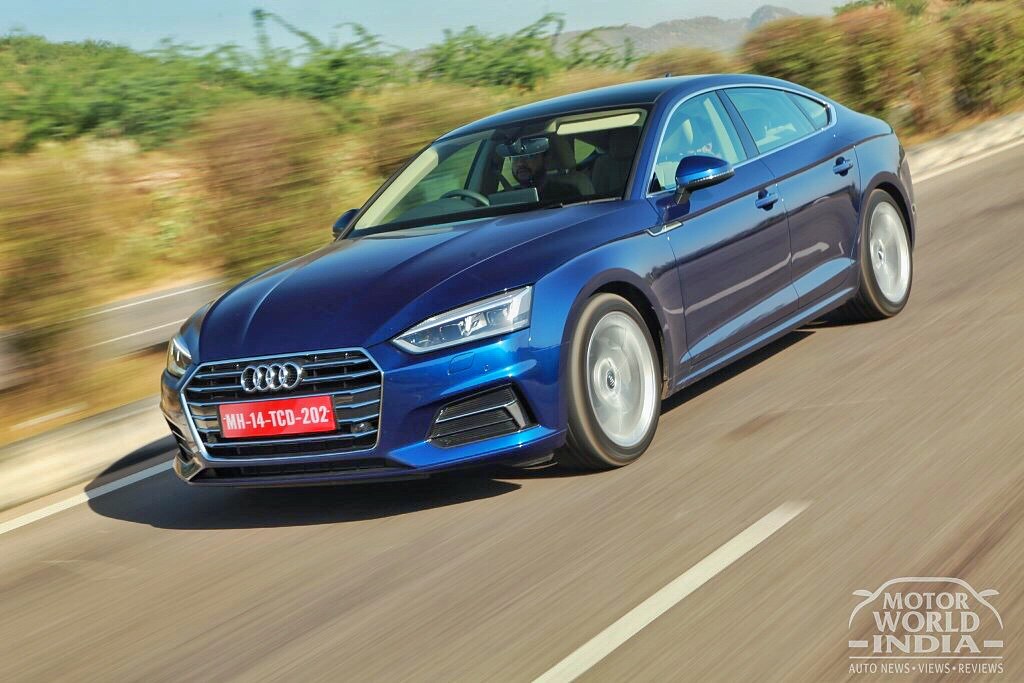 Audi cars off late have been showing some extent of aggressive designing on them. The A5 happens to be the model carrying the latest Audi design language to enter India. The basic styling on the A5 and the S5 is same, except for some minor cosmetic differences. Upfront, the large Audi goatee-beard grille with six horizontal chrome strips and the large sized legendary four ring large logo clearly emphasizes the brand’s presence. The S5 comes in black grill lines and housing, instead of chrome and a bold S5 badge on here. The front bumper has artistic lines and bends on it. Headlights on the A5 come with sharp angular design and detailing. 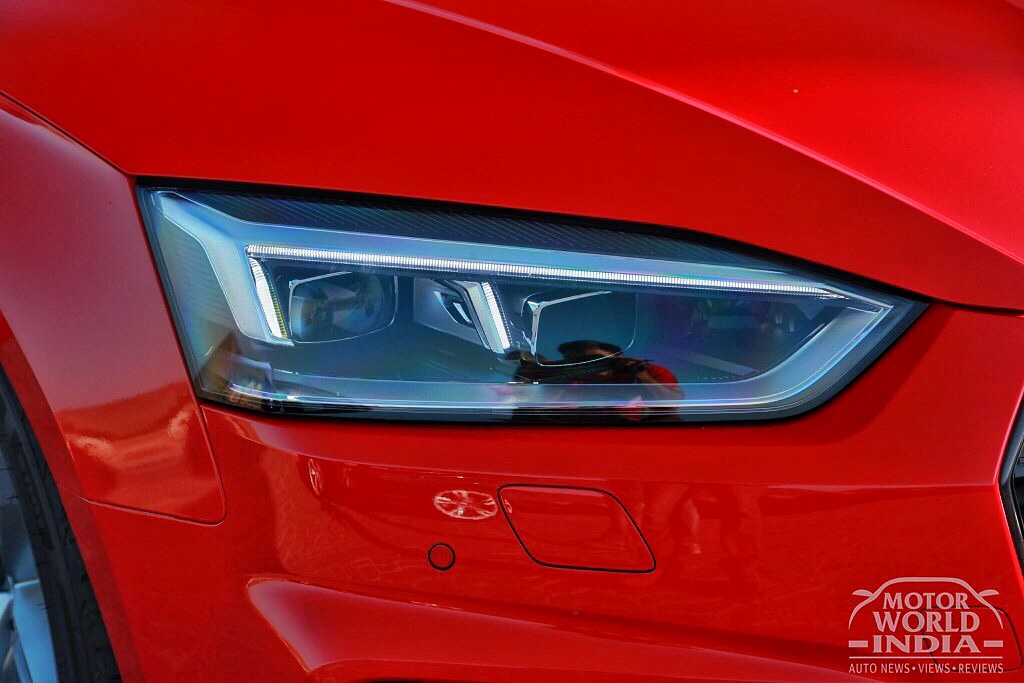 These are the latest generation, highly advanced and intelligent Audi Matrix lighting system and come with the latest generation Audi signature DRLs. There are no fog lamps, instead the place has infrared sensors and cameras that constantly send real-time info to the headlights to adjust their beam accordingly. The bonnet gets a unique upward sweeping design with four character lines scooping backwards giving a very pleasing look to the front end. The sides get a sharp waistline, while the softly flared fenders get sleek flat lines for styling, and come with chrome inserts on both the A5 and the S5. 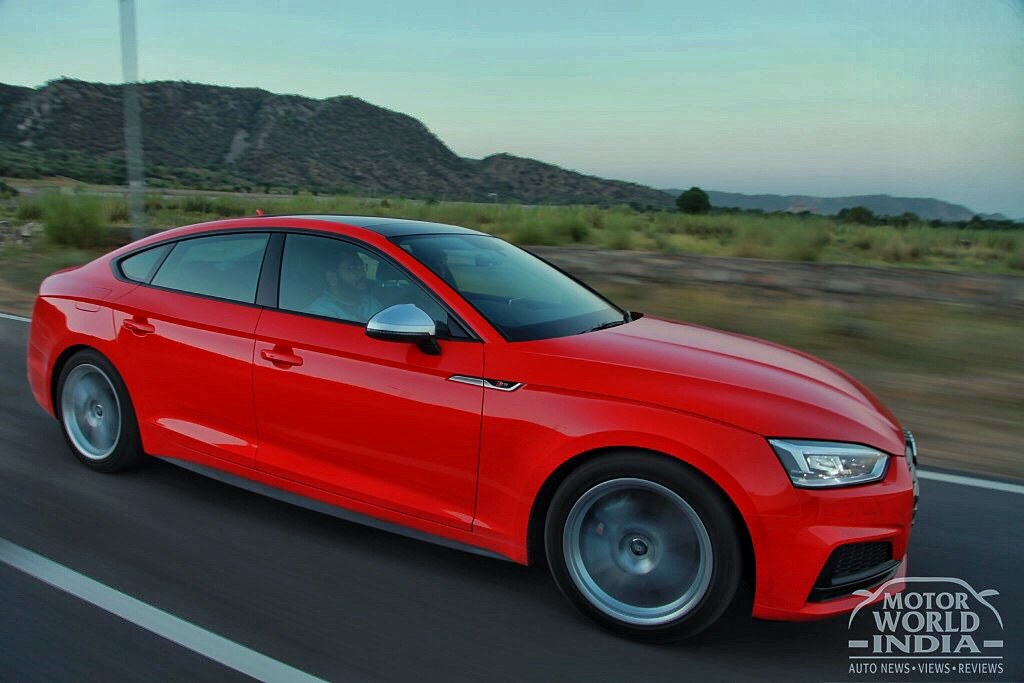 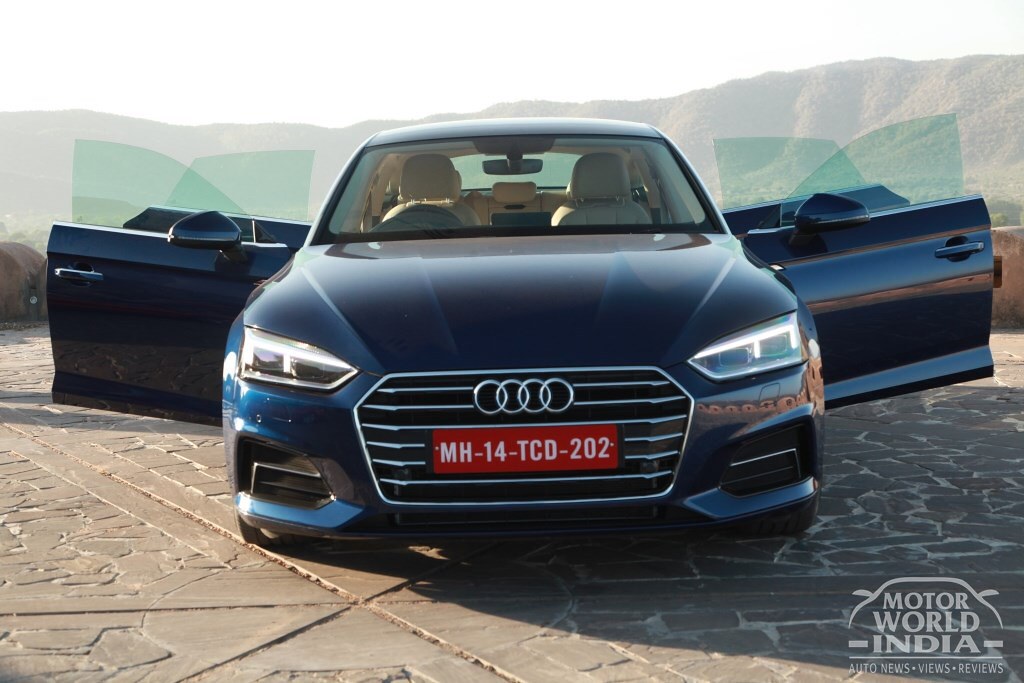 The wing mirrors are door mounted, the A5 gets body colored housing while the S5 wing mirrors come in brushed metal housing. The window line comes with nice, thick chrome lining that highlights its styling, while the S5 comes with matt black window lines. When you open the doors, the frameless window glass is the key style element. The side profile is strongly highlighted by the sloping sportback roofline that merges with the rear windshield. The A5 drives on 245/40 R18 spec Continental ContiSportContact 5 tubeless tyres mounted on multispoked silver alloys, while the S5 gets a different, more sportier star design set of silver alloys mounted on 245/40 R18 Bridgestone Potenza S001 tyres. The A5, S5 comes with panoramic electric sun/moon roof. 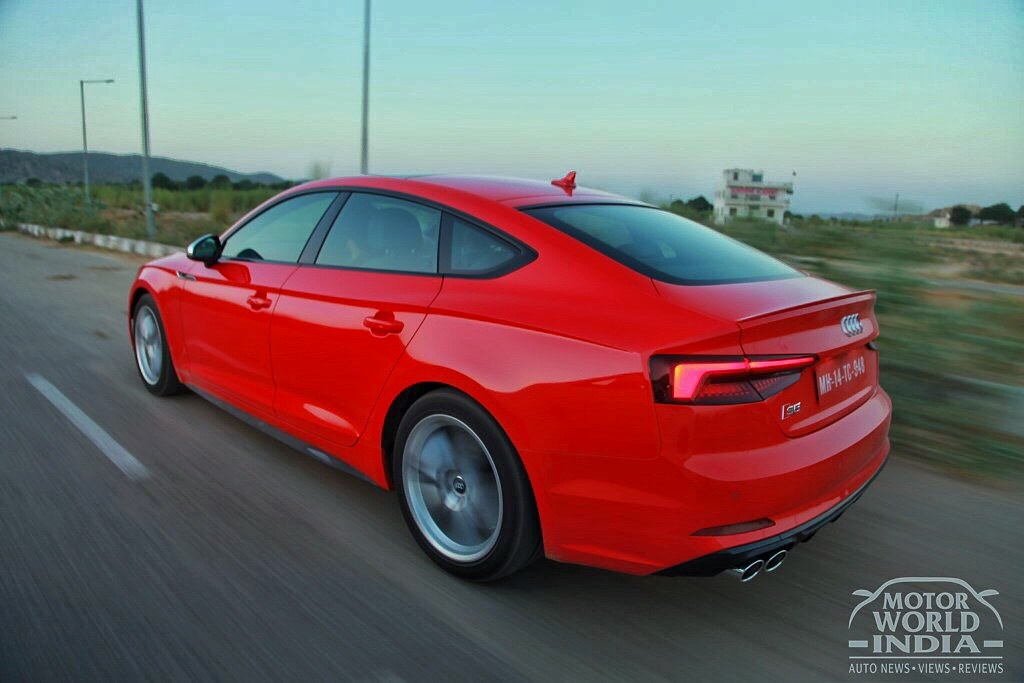 The rear profile gets its major styling by the extended sloping tailgate. The tailgate on the A5, S5 Sportback is a combined one that opens with the rear windshield. The rear also gets a neatly integrated lip spoiler with sharp lines running across. Tail lights on the A5, S5 are slim designed full LED ones with the typical new generation signature angular Audi glow in them. The turn indicators on the headlight and tail light are the typical follow-me kind of ones, that smoothly slide their glow in the turn direction. The rear bumper gets a nice chrome strip running across it along with slim stop reflectors on the corners. 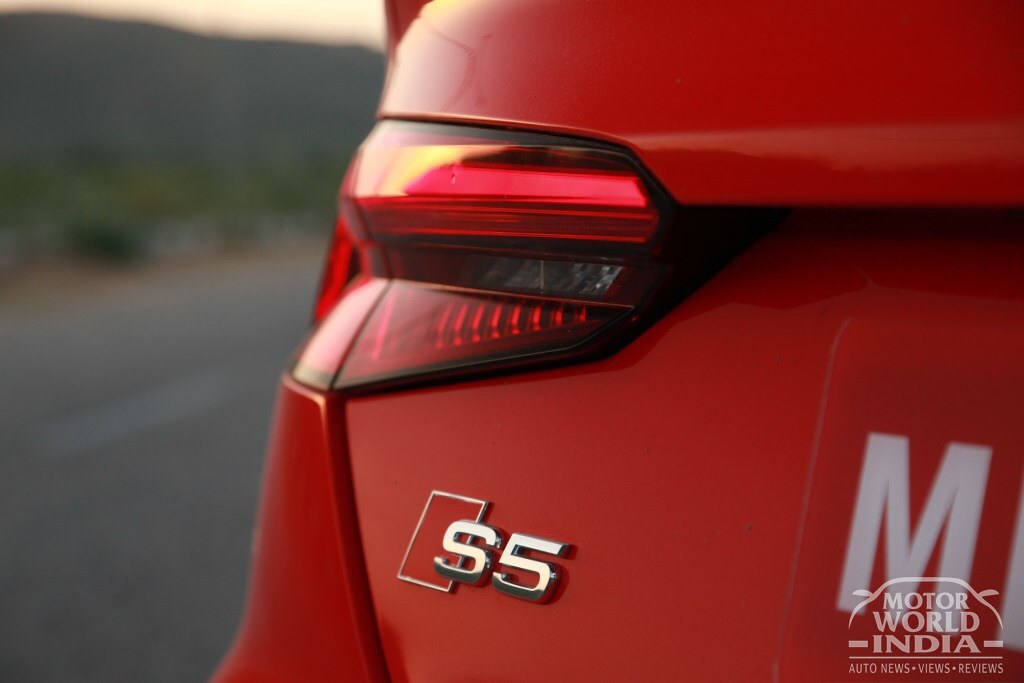 Like the front, the S5 gets the bold S5 badging on the tailgate along with a set of four round exhausts, two on each corner mounted in the dualtone bumper, while the A5 gets two exhausts on the left corner with full, body colored bumper. Both the cars also get a unique slim design strip LED stop brake light mounted on the top of the windshield. The fit and finish is top class and so is the paint quality on both the A5 and the S5 that we drove. 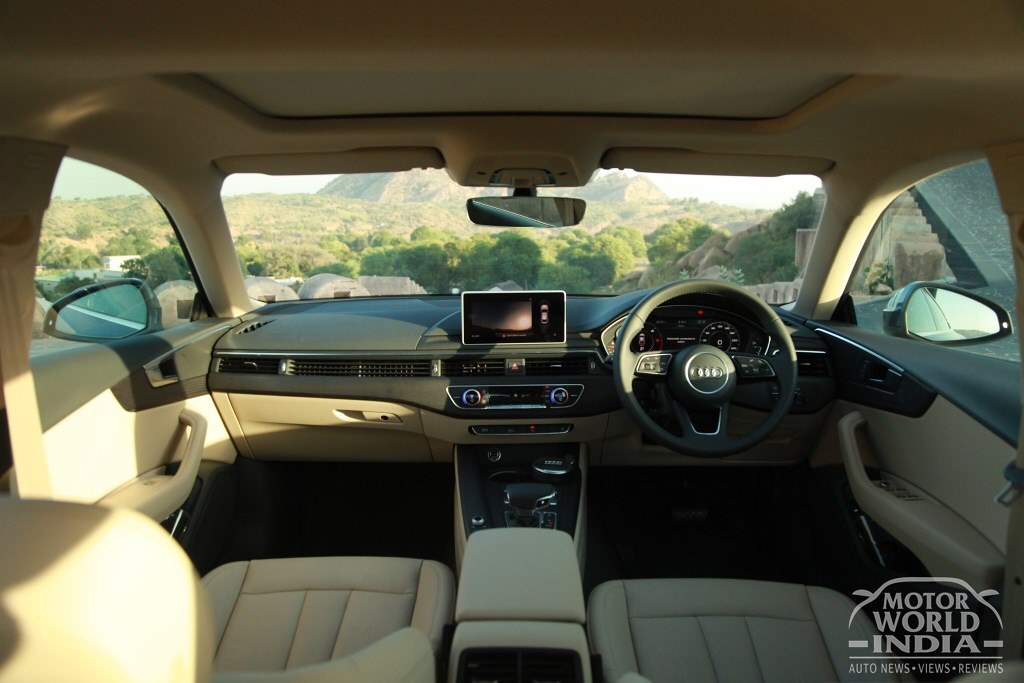 Audis are known for their well appointed and good-looking interiors and the A5, S5 takes this ahead. Step inside and you instantly realize the unique styling on the flat dashboard made of soft rubbery material. The A5 gets a dual tone dash with wood inserts on the cabin, while the S5 comes with all black dash brushed metal inserts. Both the cars come with the faux AC vents on the passenger side, that continues after the extreme left vent till the center AC vent, giving a feel that the entire breath of the dash has the AC vents mounted on it. 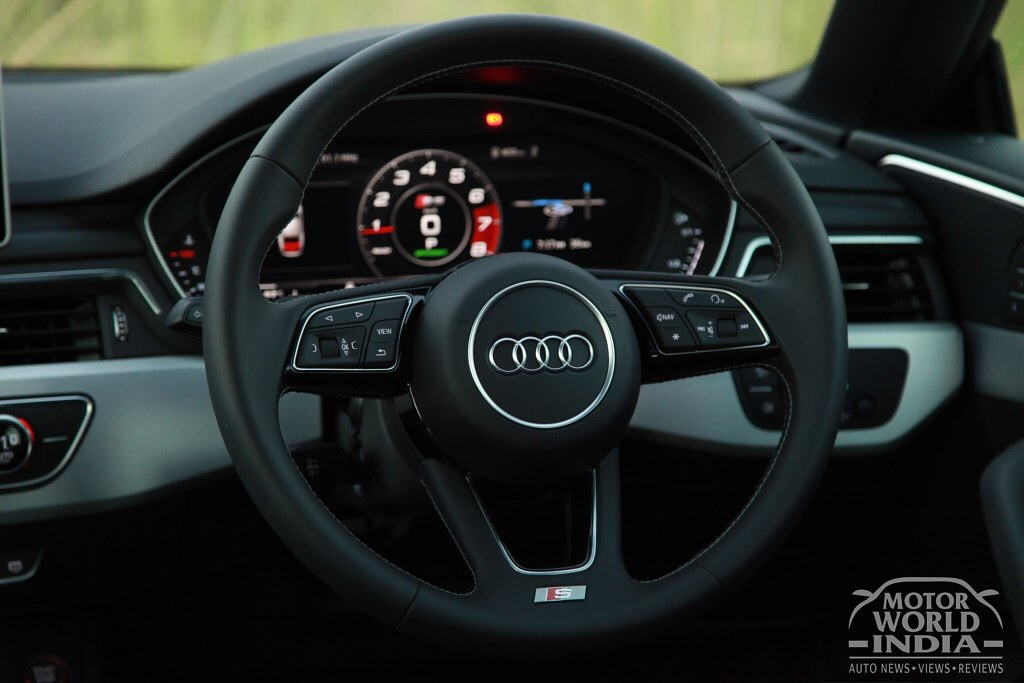 The steering is a three spoke design with manual adjust for height and reach. The leather wrapped steering on both the models comes with paddle shifters and multifunction buttons mounted. The instrumentation is taken care by the Audi Virtual Cockpit. Now this is a 12.3 inch TFT all color sharp display that takes away the old mechanical needles and dials, and in place comes the Nvidia powered unit which is highly customizable for reading out multiple displays, as the driver wants it to, in different drive modes. In one mode, you also can display the Map conveniently on the instrument cluster, which is such a boon and easy to read without taking off your eyes from the road. 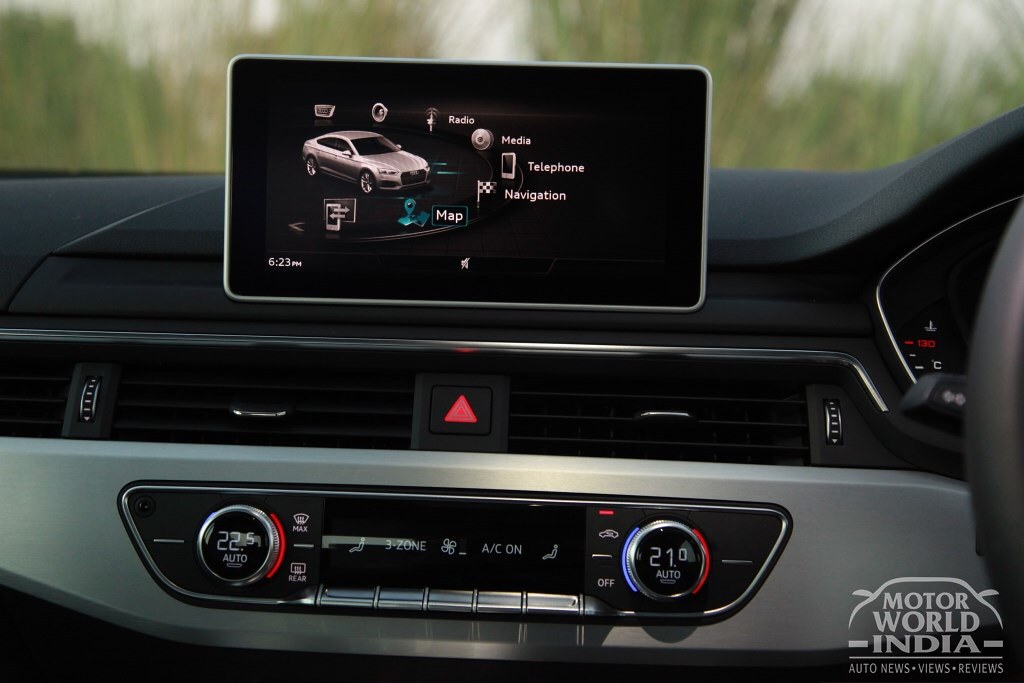 The center dash gets a 7 inches Audi MMI screen that reads out all the needed statistics and also doubles up for the infotainment system head unit and reverse camera. Control to this latest generation MMI unit is via the command dial placed on the center console. A three zone climate control is neatly placed under the screen under which you have the Audi Drive Select control. The auto transmission shifter is the latest one that’s also seen on the new Q7. This electronic leather-wrapped, aircraft-like shifter is very comfortable to use while resting your palm on it. The S5 gets sports metal pedal and also gets special Alcantara suede leather seats and door pads in an all black finish. The A5 gets beige leather upholstery seats and door pads. 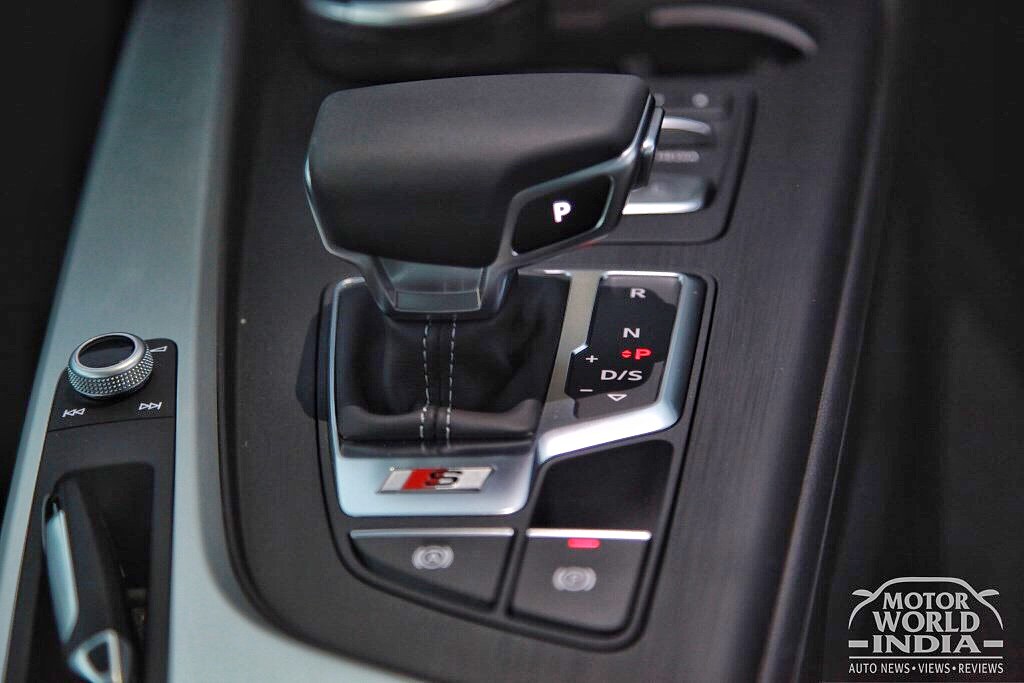 Seats have all electric setting for height, reach and incline and also come with lumber support. The S5 gets special S5 signature inscribes on the seats. Both the models get extremely comfortable XXL sized seats in the front, with added bolstering for extra back support. The rear seats get head rests and foldable arm rest with cup holders in them. The rear seats can be folded down in parts to extend the boot space, plus you can also just fold down the seat behind the center arm rest if you have to keep some long stuff in the boot. 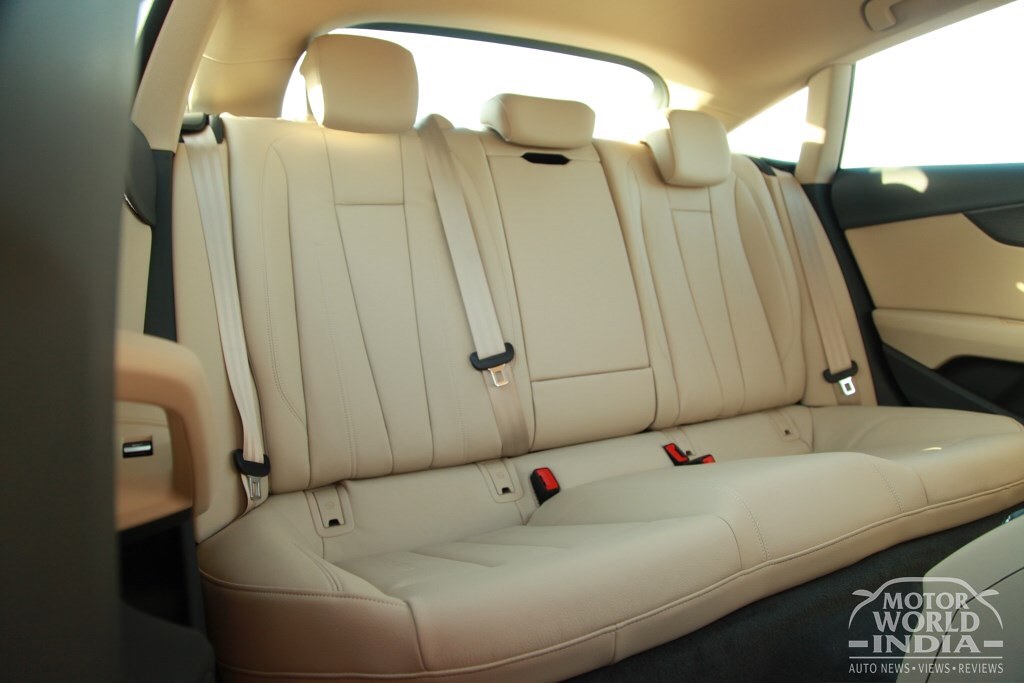 Rear seating is best left to two passengers, as the transmission tunnel hump runs through the floor area. Seating both in the front and rear is extremely comfortable and supportive. Headroom and leg room both at the front and back is more than good, and head room is also excellent overall. The A5 and S5 both come with ambient lighting package for the cabin which makes things extremely colorful on dark night drives. The cabin is very well appointed, quality of materials used is of top class and everything looks and feels very premium inside the A5, S5. The Audi A5, S5 boasts of a boot space of 480 litres that can be doubled to 980 litres, with the rear seats folded down when needed. As the boot opens fully along with the rear glass, the loading area is super wide with a very generous capacity. 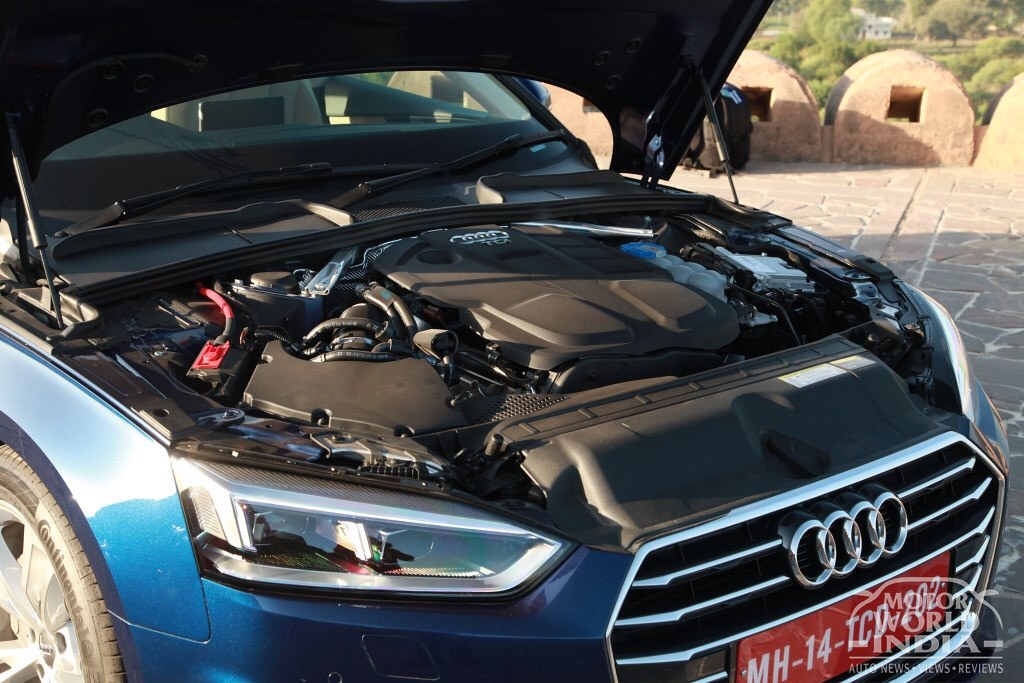 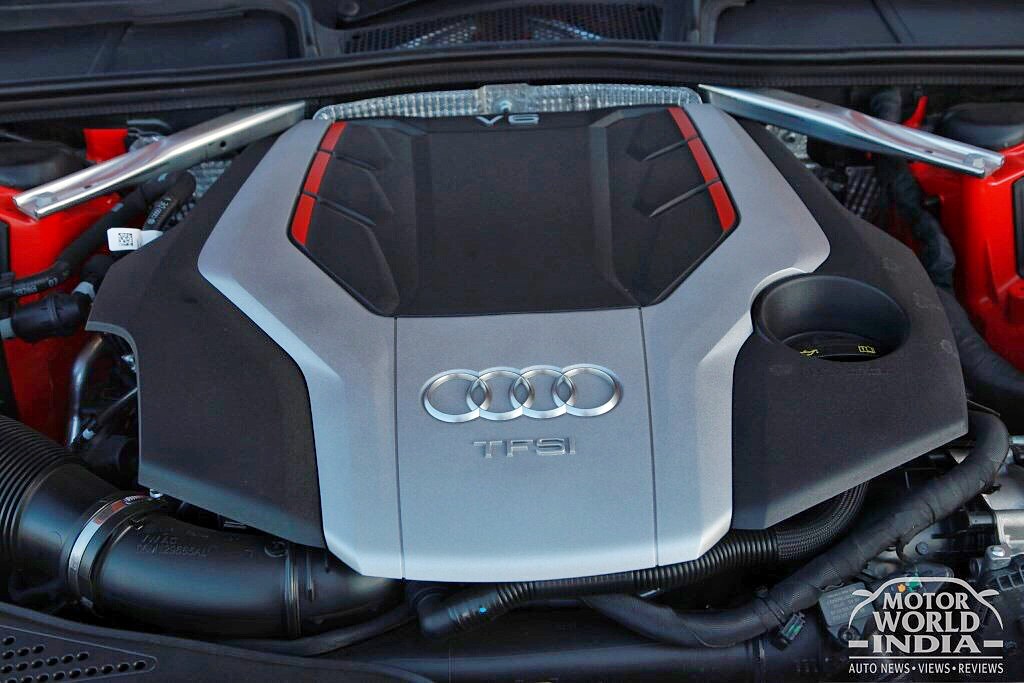 No denying that the A5 and the S5 both are pretty-looking premium cars, but the engines that power these cars are also pretty neat. The A5 gets its power from the 2.0-litre TDi 4 cylinder Diesel engine (EA288) that makes 190PS of power and has 400NM of torque pushing it. This powerful engine is mated to 7 speed DSG Automatic transmission. The Audi S5 on the other hand, comes powered by the 3.0-litre Turbo V-6 TFSI Petrol engine that kicks out 354PS of power and a massive 500Nm of torque. The S5 gets a 8-speed Torque Converter transmission, not forgetting the legendary Audi Quattro All Wheel Driving system that’s also available on the S5 package. 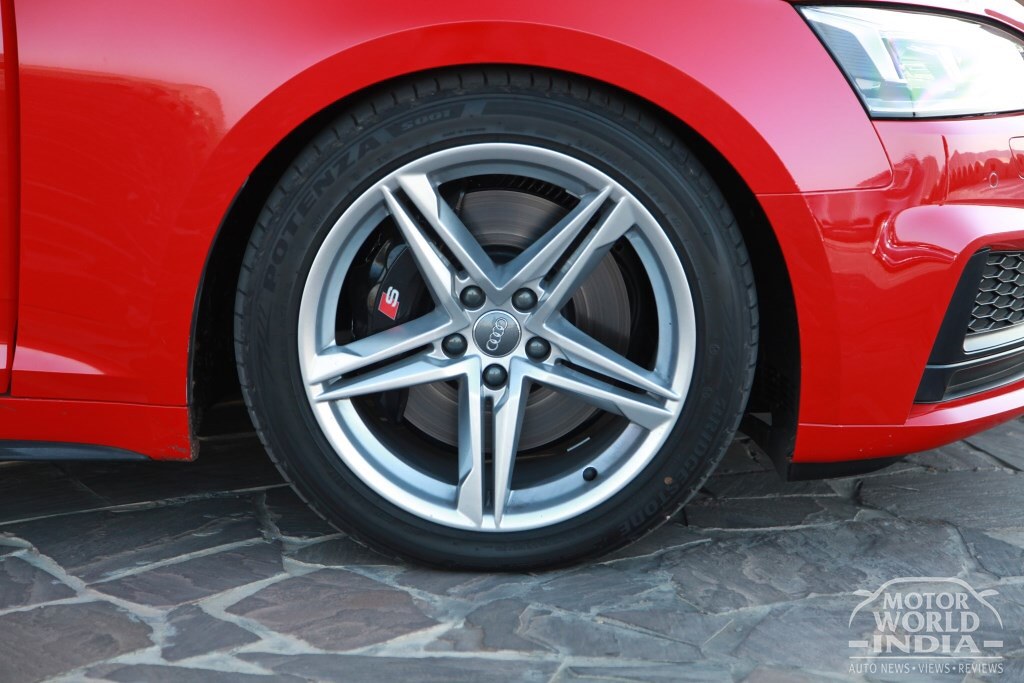 We drove both the models and here’s how they feel in real world situations. First the A5… first thing you notice is the silence inside the cabin with the diesel engine running. The refinement level is high, so is the cabin free from any vibrations at idle or while in motion. Power delivery is quick and the steering feedback is always positive at all speeds. The electromechanical steering give a crisp control, while the feedback changes when you change the drive modes from the Audi Drive Select modes. The A5 eats up the highway run in style while the suspension is tuned on the stiffer side, it does a good job on bad roads as well. Audi claims a 0-100kmph speed in 7.9secs and we fully agree with those figures after experiencing the car. This is one of the best diesel engines currently available in the family. You can take further control of the shifting using the paddle shifter or the tip-tronic. We loved driving around in the dynamic mode most of the times. 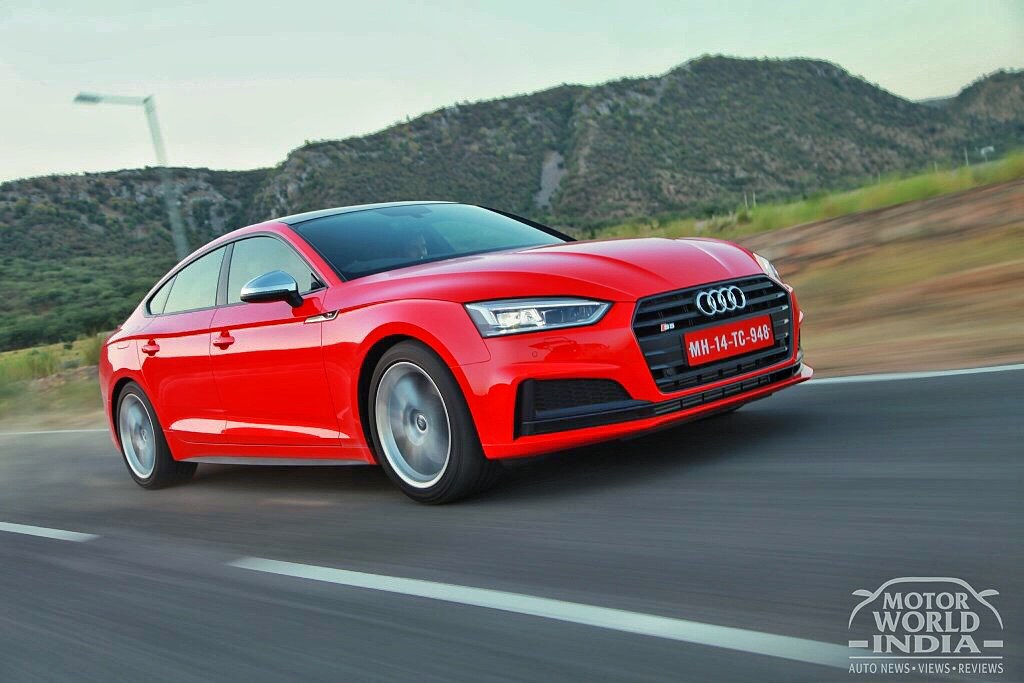 The Audi S5 on the other hand, feels like a dynamite to drive, the engine roar is heard inside the cabin and that adds to the overall fun factor. Adding more spice to the experience is the occasional engine blips that are heard while the gear shifts happen. The steering feedback is a lot more connected on the S5, and the suspension is set to a stiffer setting to go with the engine and dynamics. 0-100KMPH is a claimed 4.7secs and the S5 does just that. The drive feel is very confident and involving. The Audi S5 comes with enhanced S braking and S-Sport suspension package. 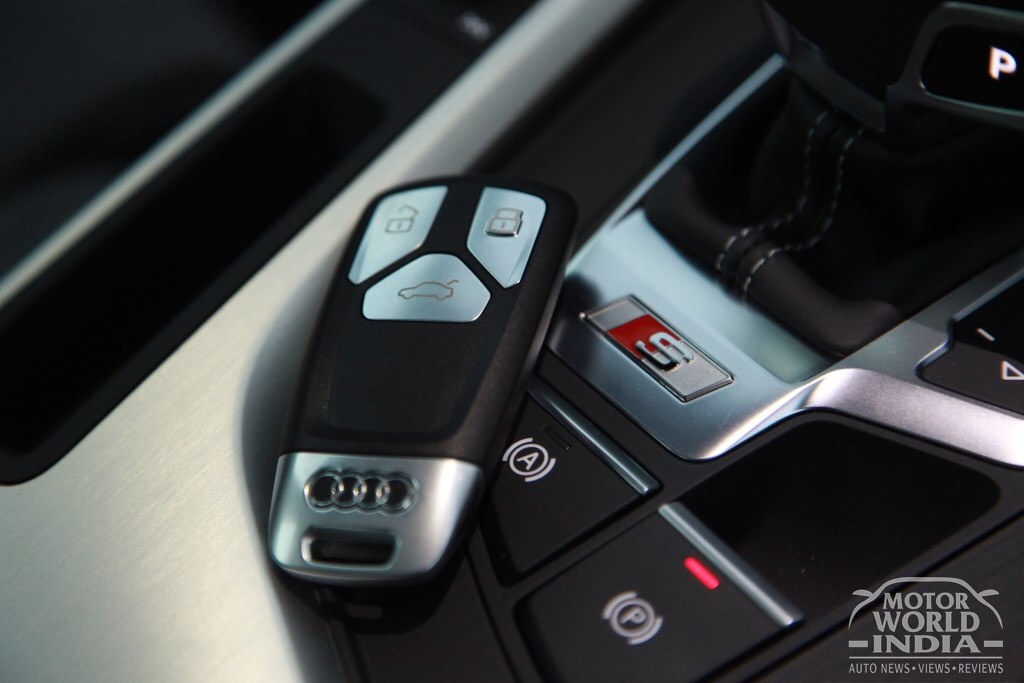 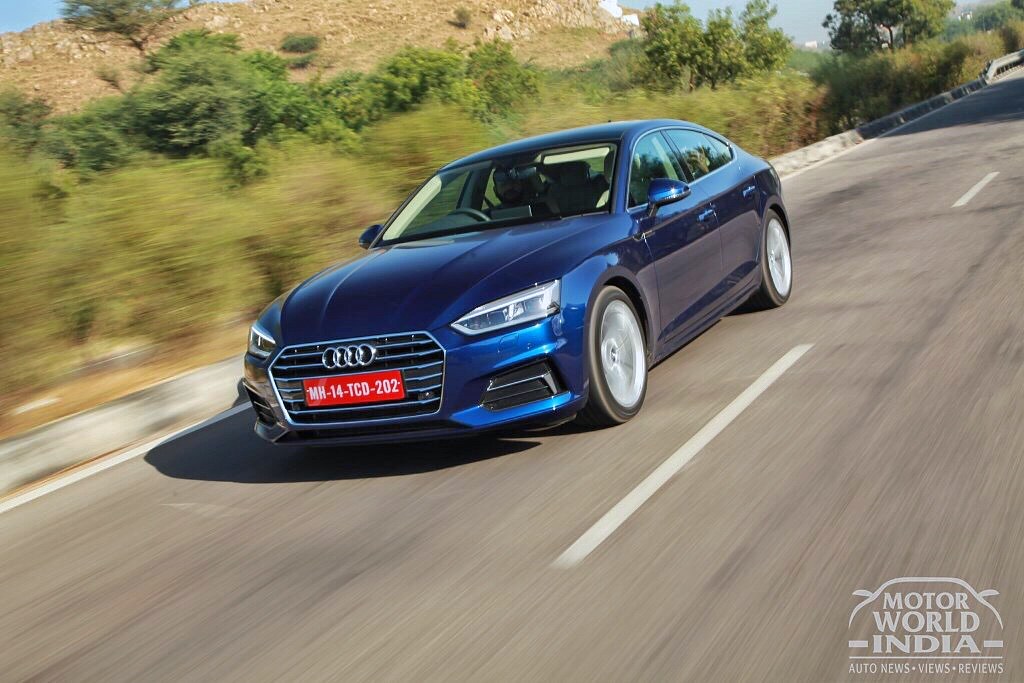 The Audi A5 and S5 are both extremely good-looking and smart performing cars. Audi has taken its design and styling up to the next level, and the A5 is just a fine example of that. The A5 has a very practical daily use Diesel engine, while the S5 is an all fun package. The ride quality on both the models is good, and if you have a budget of around Rs. 50 lakh (A5) to Rs. 65 Lakh (S5) approx, we would say these A5 brats are a mighty good option for you. Even if you are eyeing the Audi A4, the A5 with its styling, space, features etc. makes more value for money. 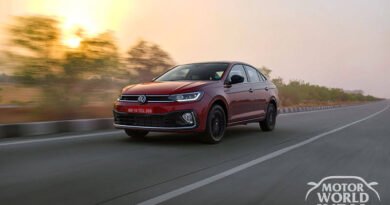 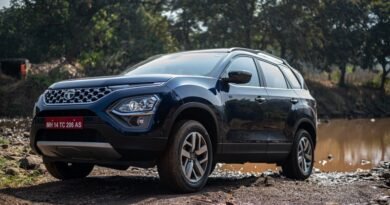 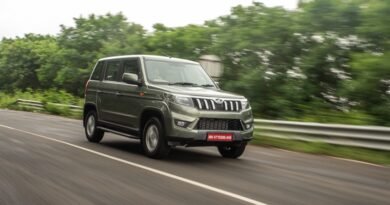