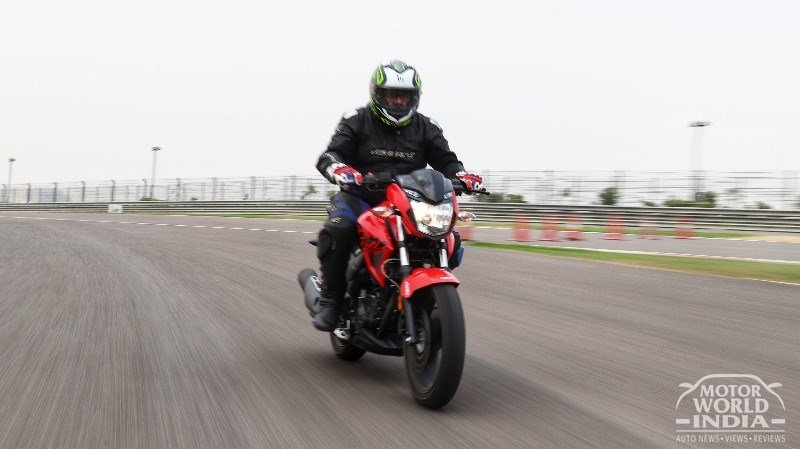 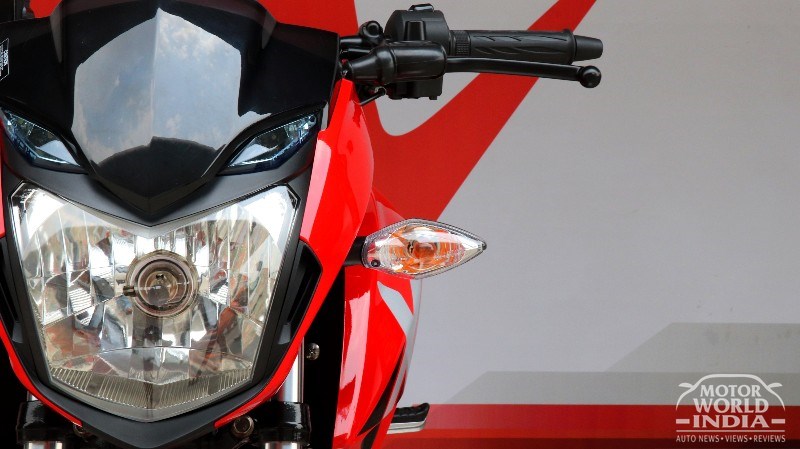 Hero Motocorp, formerly Hero Honda, began its journey in 1984, with a tie-up with the Japanese giant Honda to manufacture 2 wheels in India. Since then, the company has delivered legendary motorcycles, which today support the backbone of this country to commute. In 2012, Honda decided the exit the venture, and Hero Motocorp was born. With the breakup complete, Hero was left with not much of technological know-how, since Honda had copyrights on their design. Somewhere in 2014, they inaugurated their new R&D facility in Rajasthan, and thus kick-started the work for new engines & motorcycle development. 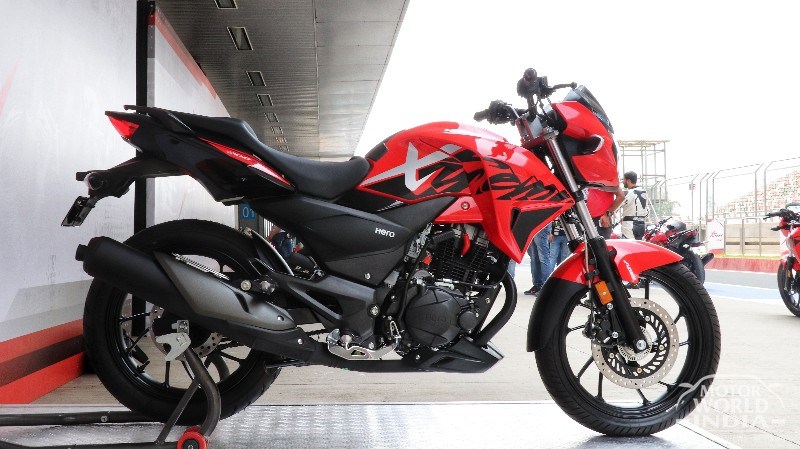 Now you must be thinking that for Hero to survive must have been pretty difficult, but just to inform you, Hero Motocorp is still India’s market leader when it comes to volumes. In a market where manufacturers with their modern & stylish bikes have flooded the consumer with options, Hero has managed to safeguard itelf at the helm. In late 2017, Hero showcased its Passion X, Passion X pro and Splondor Pro, which are equipped with Hero’s own developed Engines, much more powerful & refined than what it replaced. 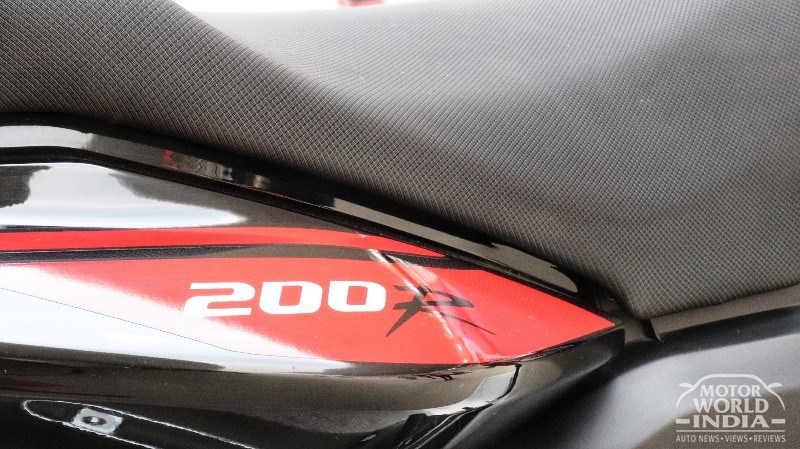 At the AutoExpo this year, Hero showcased the Xtreme200 and Xpulse200 and promised to launch them this fiscal. Well, let me tell you that the Xtreme200 is already on its way. We recently rode the All new Xtreme200 from Hero Motocorp, at the Buddh International Circuit and the following is our review of the same. The bike is yet to be launched with the pricing announcement, and we expect it to happen before July end. To start off with, this is Hero Motocorps first ABS enabled offering for the Indian Market, but again it is only a Single Channel ABS on the front end. 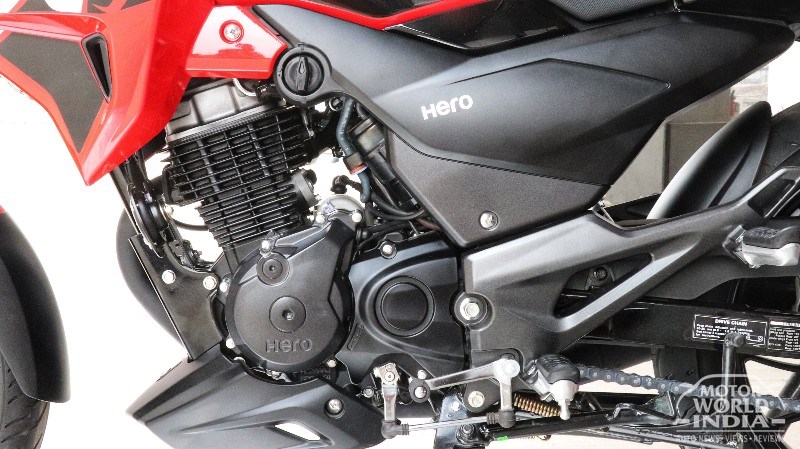 The new Xtreme comes mated to a 200cc 2 valve Air-cooled engine, which produces 18.4 bhp of power at 8000rpm and 17.1 NM of Torque at 6500rpm, well the power figures aren’t that impressive, but then it  does not want to impress you with its power. The Xtreme200 offers the Reliability, Quality and Trust of a brand that India has believed in since decades now. It’s the same Ambition Engine, redesigned to fit a 200cc block. Hero says the Xtreme200 will cater to those looking for a upgrade and are considering current 150-180cc segment offerings, since the power figures are in the same range. We feel Hero is definitely hinting at the price tag too with this comment. 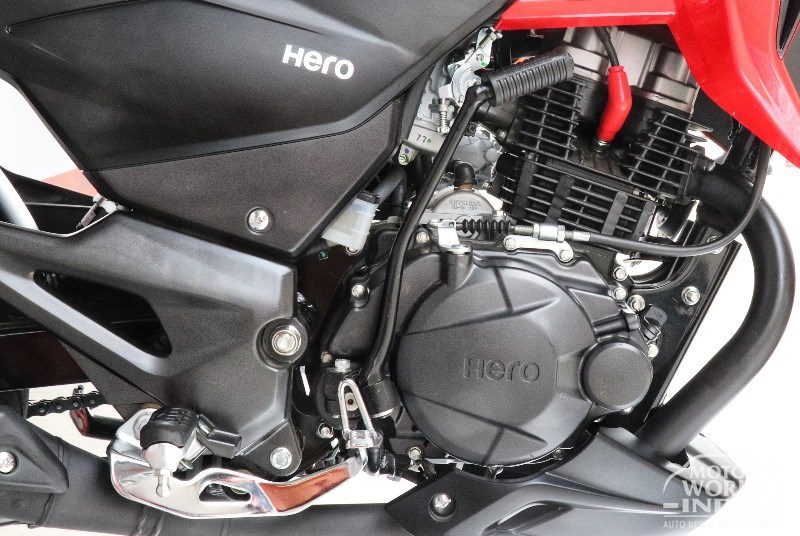 We rode the Xtreme200 on the Short section of the track and were constantly at full throttle, top gear without any mercy for over 15 laps and surprisingly, the Air-cooled engine showed no signs of overheating. All the power is delivered in the mid rev range, between 4k and 8k rpm, exactly where you need it in the daily life of commute and traffic. Surprisingly, the not-so-sporty looking Xtreme behaves very well on a track and allows you to take those high speed corners with ease. Even the scraping footpegs did not dis-balance the ride, the Xtreme runs planted in all conditions. The bike is amazingly fast between 0-90kmph and then it loses out the pull, though we managed to touch a top speed of 114kmph before we had to brake for a corner. 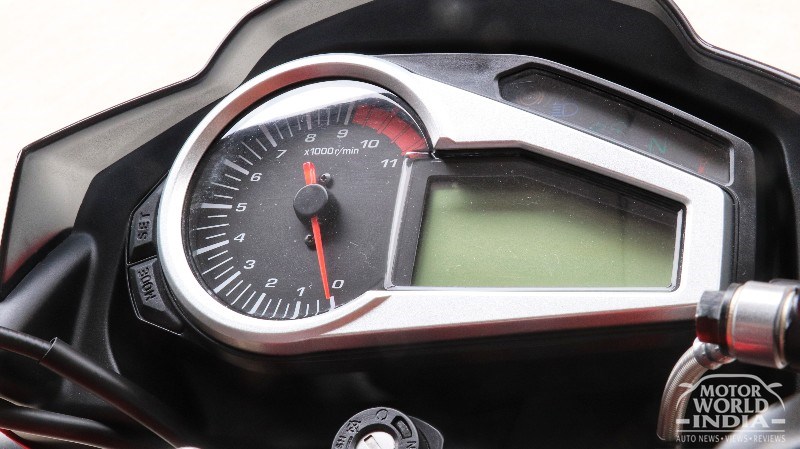 Power figures surely won’t pull customers, but the refinement, reliability and mileage figures of the Xtreme surely would. A large chuck of 2 wheeler buyers are commuters, and this is where Hero wants to make a space for itself. The Xtreme200 is a performance commuter, which means it will deliver far better mileage figures than competition. Hero claimed a mileage of 50kmpl+, though we would need to check that on road-world scenario for exact figures. The Xtreme is a perfect balance of Practical Designing and Outright performance. 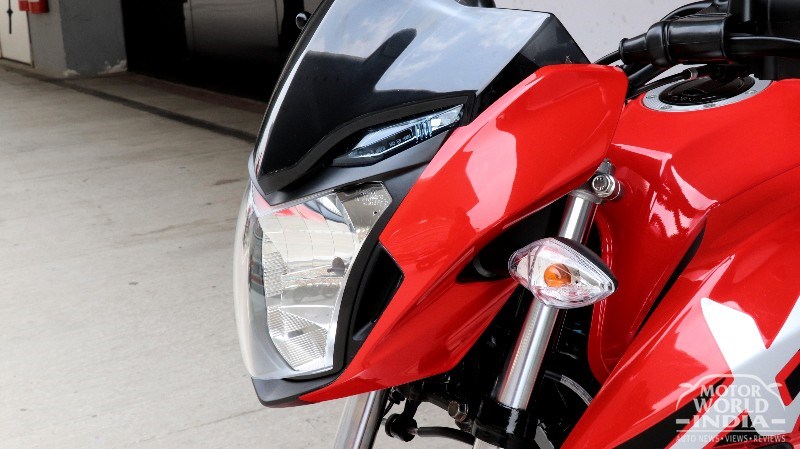 Well, it looks exactly like how Hero showcased it to us at the Auto Expo 2016, and almost resembles the younger Xtreme sibling, only difference being that the Xtreme200 is beefier. The front end is occupied by a huge headlight burrowed from the younger twin, which still comes up with halogen lamps. LED Drls, also called as Wolf Lights are present, though a LED headlight bulb would have added greater value. The Petrol tank looks huge, with large fibre shrouds coming out from both the ends, proving ample space for the rider to lock his knees. The Xtreme badge can be seen screaming out from both the sides, which actually adds some sporty element to the bike. The rear end of the bike is inspired again from the older Xtreme and comes with the same LED tail lamp we saw on the Xtreme Sports. The exhaust too is pretty simple, without any additional styling efforts put in by Hero.  The Xtreme comes with a single seat, unlike its sibling; wonder why Hero did not carry forward the split seat setup. It looks like Hero has built the Xtreme200 with use of existing resources, in attempt to price it low. 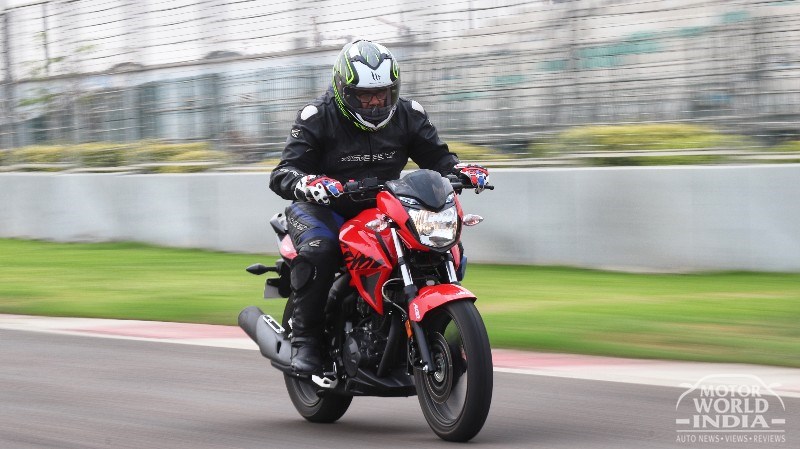 The riding experience is surprising to start off with.  The bike allows you to have fun from Day 1 and is very welcoming. The riding posture is pretty straight, with tall handlebars and straight down foot pegs, allowing the rider to sit comfortably. The bike is very agile and easy to maneuver, and the front end runs planted in all conditions. Hero has equipped the Xtreme200 with big 37mm telescopic forks, and on the rear it has a 7-step adjustable Mono-Suspension which actually makes all the fun happen, and allows the Xtreme steer through tight corners with ease. The chassis is the same we saw on the Xtreme siblings, and is pretty balanced, a tried a tested mule for years. 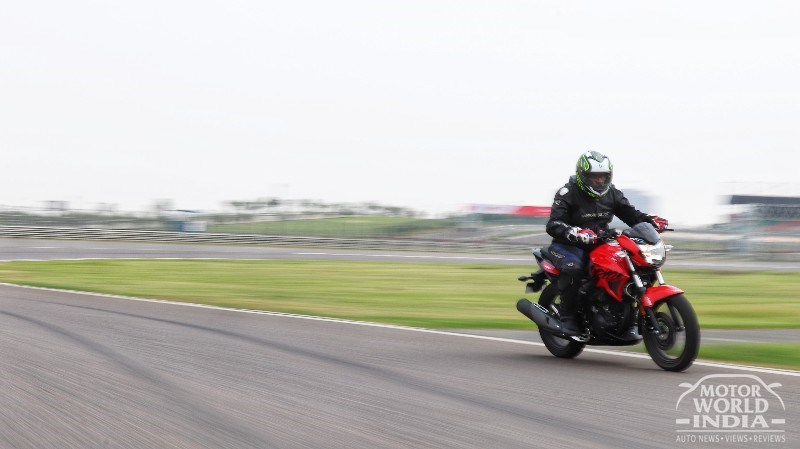 The Xtreme200 is the first Hero motorcycle to come with an ABS option, though it is only a single channel setup on the front end.  To manage braking and traction, Hero has used a fat 100-80-17 section MRF tyre on the front, and a equally beefy 130-80/17 Radial section MRF on the rear, to give you that grip when you ride. These shall be tubeless tyres, to keep you out of the puncture hassle. Out of my track experience, I can surely say that the tyres provide great grip, even on deepest of corners. Out of our 45 mins on the BIC, there was no corner the tyres showed signs of giving up. To help stop the Xtreme, Hero has used a 276mm ABS enabled disk on the front, and a 220mm Disk brake setup on the rear, and they perform brilliantly. Even under hard braking there were no signs of the rear locking or fish-tailing.  Over all, the Xtreme delivers brilliant comfort and offers amazing control to the rider. A very simple motorcycle to ride, comfortable suspensions, efficient braking and a high fuel economy, we guess Hero has hit all the right tick marks a commuter would consider in his upgrade. 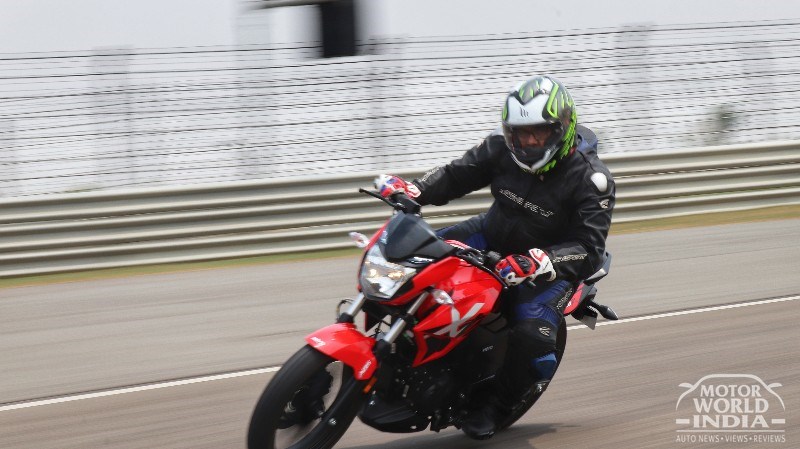 In terms of features, there aren’t any new surprises other than the single channel ABS. The instrument cluster is an Analogue tachometer fused to a Digital cluster providing details like trip meter, odometer, speed indicator and a clock, but it misses out on a common feature like gear indicator. There are indicator lamps for Side stand on, Side indicators, Upper Headlight and ABS ON indicator. The bike is very basic, easy to understand and fix, something that Hero must have pondered upon to provide the after sales to Xtreme200. 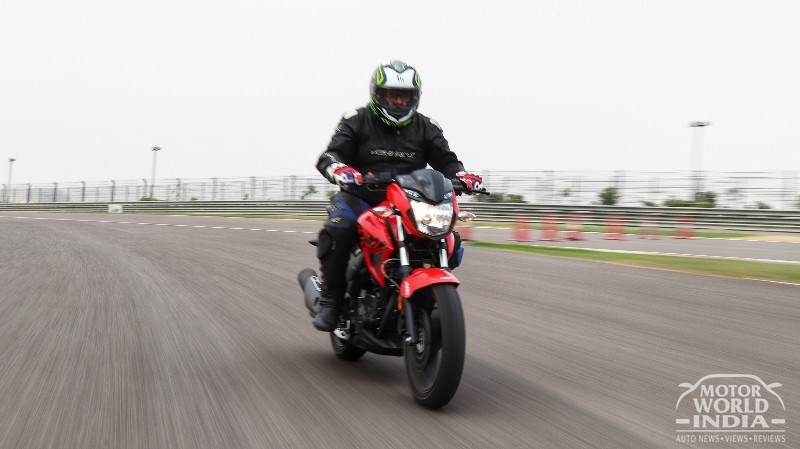 Well, it’s the perfect modern commuter one would look for today to manage his daily travel in the city and on highways. It offers power where it is required, will deliver best in class mileage, comes with a legacy of reliability and trust of Hero Motocorp, seems like a kickass offer, but something’s missing. The cherry on the top is still missing, and that’s the pricing. If Hero Motocorp manages to price the Xtreme below 80-85k where most of its competition is, other OEMs Sales team people surely need to brace themselves for a roller-coaster ride. 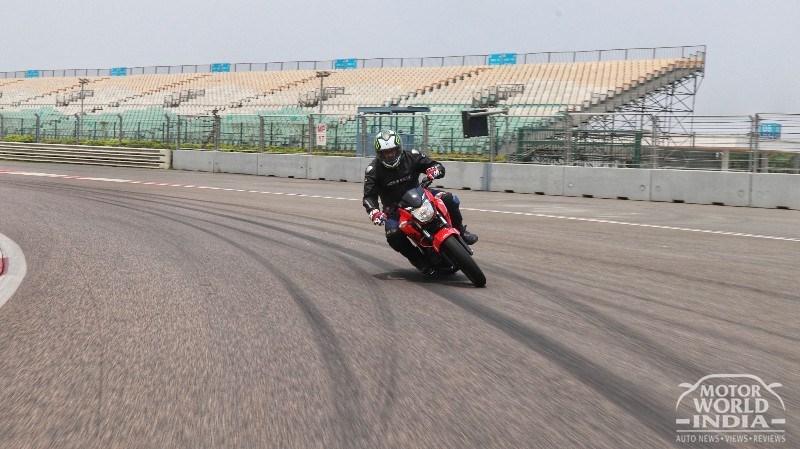 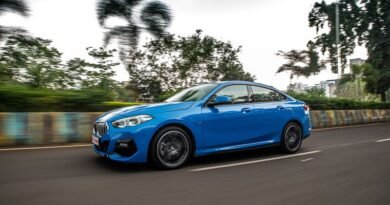 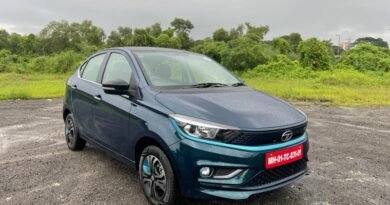 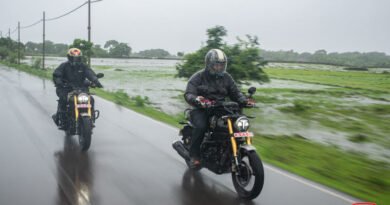