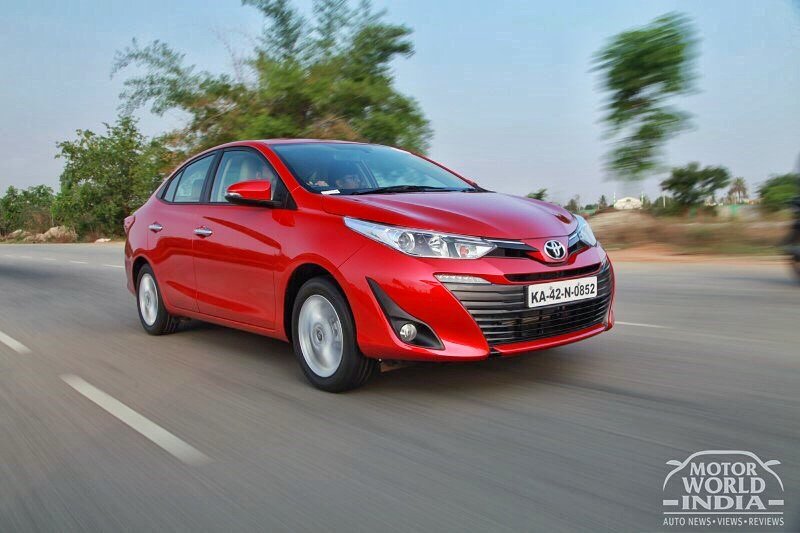 Toyota has always been a dominant force in the Indian auto scene since 2000,  starting with Qualis. Innova has been a household name and has been selling in large numbers along with the other global models- the Corolla, Camry and not to forget the earthmovers, also known as the Land Cruisers. The only models which did not take off like their other cars were the Etios & Liva. Now Toyota is all set to enter the Premium midsize sedan segment where they didn’t have a worthy model. The Yaris which was showcased at the 2018 Auto Expo is all set to make its India debut, come May 2018. Read on to know everything about the all new Toyota Yaris as we drive it in and around the garden city of Bengaluru. 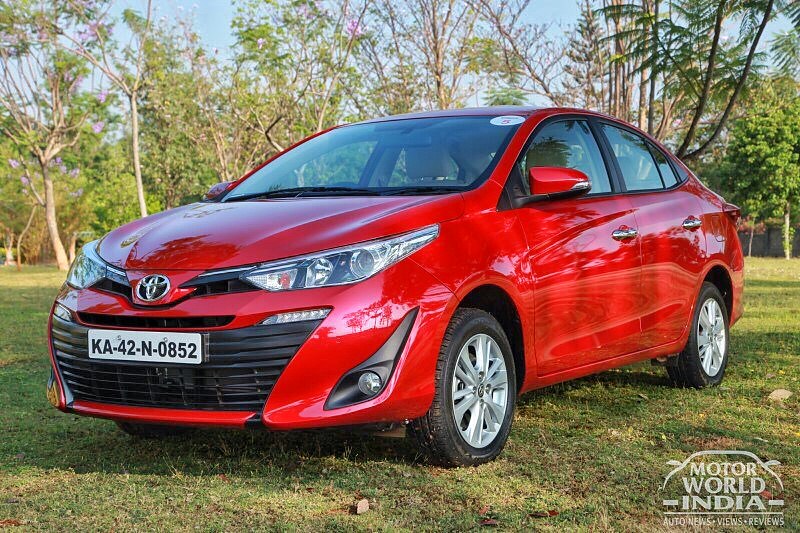 The first generation Toyota Yaris came to life back in 1999. It was sold as the Echo, Vitz & Platz in international markets as a hatchback and a sedan. The second generation was sold as Belta & Vitz. Currently in its third generation, the Yaris is also sold as Vitz & Vios. The name Yaris is derived from the Greek Goddess of charm and beauty “Charites”. Collectively, this model is sold in over 120 countries, produced in 6 different manufacturing plants across the globe, and sells around three lakh units yearly. 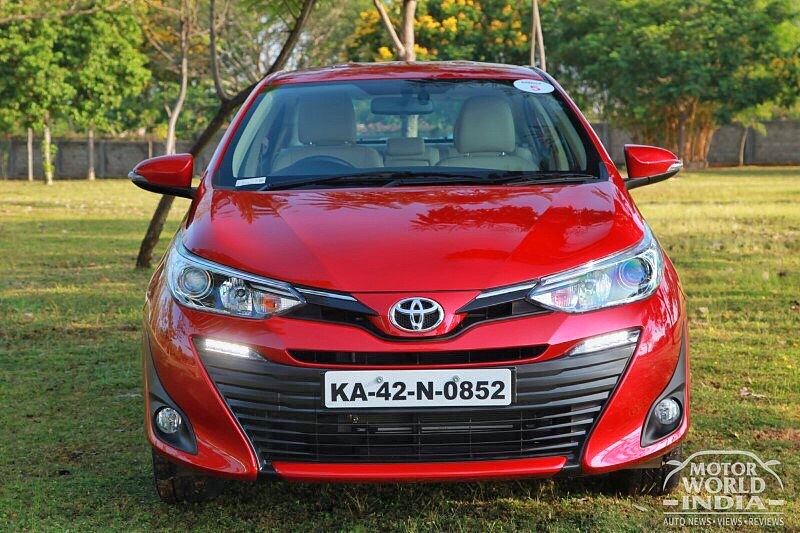 The first thing which comes to your mind when you look at the Yaris is the ‘wow’ factor. It is stylish, elegant and downright stunning. The large wrap around headlamps which perfectly runs across the front and ends just above the front fender, blending itself nicely with the dominating Toyota badge. The headlamp is projector type with line guide and LED DRL’s mounted on the front right below headlamps. The front grill is tiny which houses the large Toyota logo and neatly integrates itself with the headlamps via a slim chrome strip above the piano black housing. The front bumper is dominated by a large-sized air-dam that is is styled with eight horizontal slats running in line below the headlamps giving it a V like shape. Round fog lamps are neatly integrated and placed on the extreme corners of the bumper. The bonnet flows smoothly along the two character lines merging with the A-Pillar. 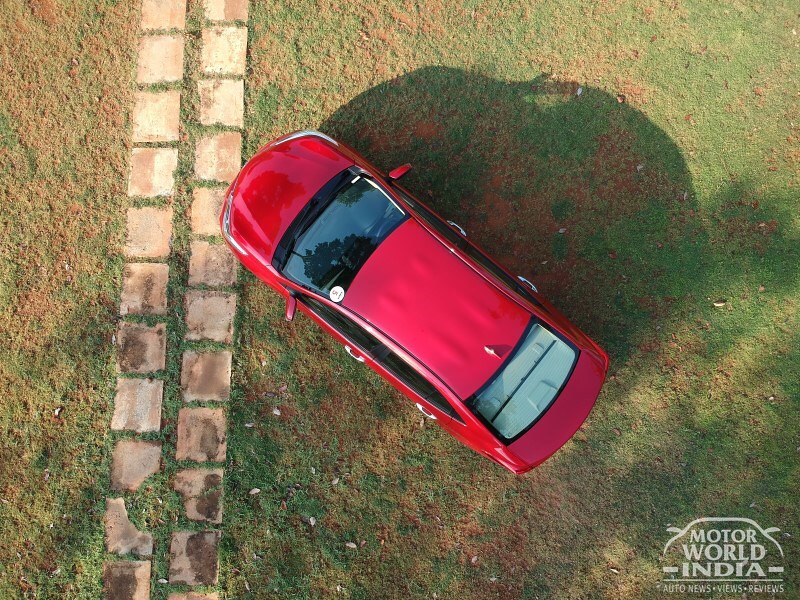 The side profile mainly consists of the sloping roofline that flows down into the C-pillar, three character lines that give the sides the much needed muscularity, and the chrome grab door handles along with blacked out door frames. Wing mirrors come with full electric adjust, LED integrated turn lights and auto fold feature on them. The rear profile on the Yaris looks neat, and comes with flushed large tail lights with LED line guide in them. The rear bumper is large in size and has large stop lamps placed on either bottom corners. The Yaris gets front and rear parking sensors on the equipment list. Body colored shark fin radio antenna comes mounted on the Yaris. The roof also also has smooth distinctive design lines on it. The Yaris drives on 185/60 R15 Goodyear Tubeless tyre mounted on six multi spoke silver alloys. 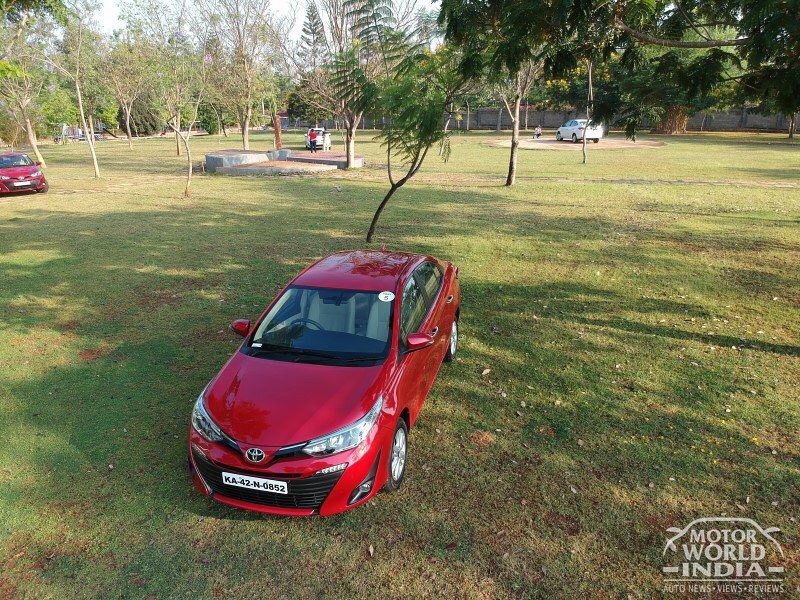 The fit and finish on the Yaris is good and typical Toyota, the car looks very modern and appealing to the eyes and the front also reminds you a lot of the elder brother, the Corolla Altis. 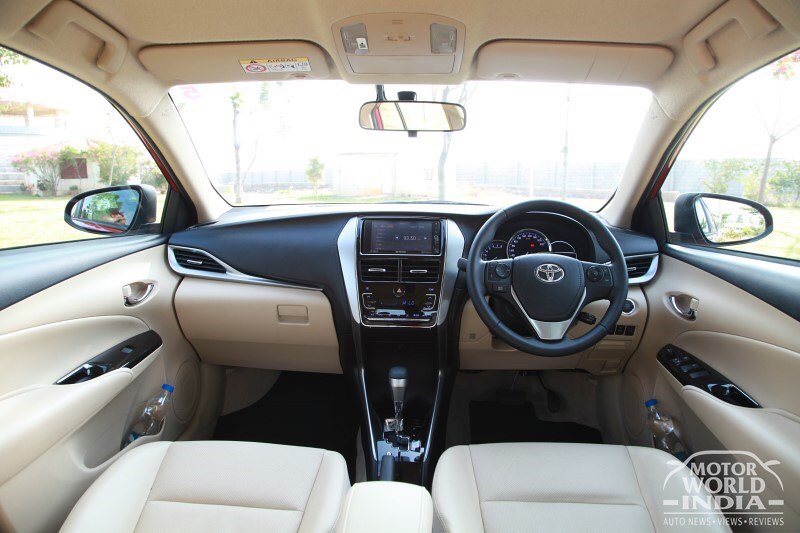 Step inside the Yaris and the dual tone waterfall design dashboard is what you notice instantly. The dashboard gets an innovative artificial stitch finish running around it. There are also faux aluminium inserts that run from the AC vents, around the center dash and around the instrument cluster adding to the melodrama of the cabin area. The steering wheel is borrowed from the Altis Corolla and looks classy and comes with tilt adjust. Reach adjust for the steering is sadly missed. It comes with neatly integrated multifunction control buttons, paddle shifters and also the cruise control. The instrument cluster consists of a analouge speedo, tachometer and a 4.2 inch color TFT multi-information display (MID). This MID is a pretty intelligent one which along with all the standard info also reads out the exact amount of money spent and saved on your trips, daily to yearly basis. 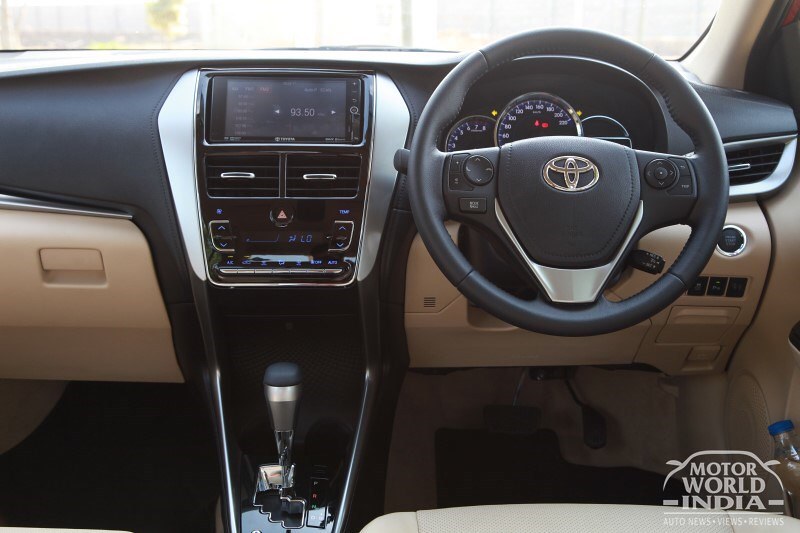 The center dash houses a 7inches full color Touchscreen infotainment system with a DVD player, FM radio, USB. Sadly, this unit does not support Android Auto and Apple CarPlay. This unit comes with a fun to use gesture control that’s intuitive to play with. The Yaris gets a 6-speaker music system pumping out very good sound quality. The climate control is a single zone unit, but also gets a roof mounted air vent with ambient illumination for the rear passengers, this unique rear AC blower can be controlled individually by the rear passengers. The Yaris comes with perforated leather seats in beige color, the front seats are also borrowed from the Corolla Altis, which are XXL in size and feel, along with being extremely supportive and comfortable to be seated on. You also get a large cooled glove box and a neat cubby storage bin placed under the center armrest. The rear seats are also supportive and come with foldable center armrest and adjustable headrests. The rear windshield also gets a manual sun curtain. The door pads get bottle holders on them and the rear seats are ISOFIX ready. 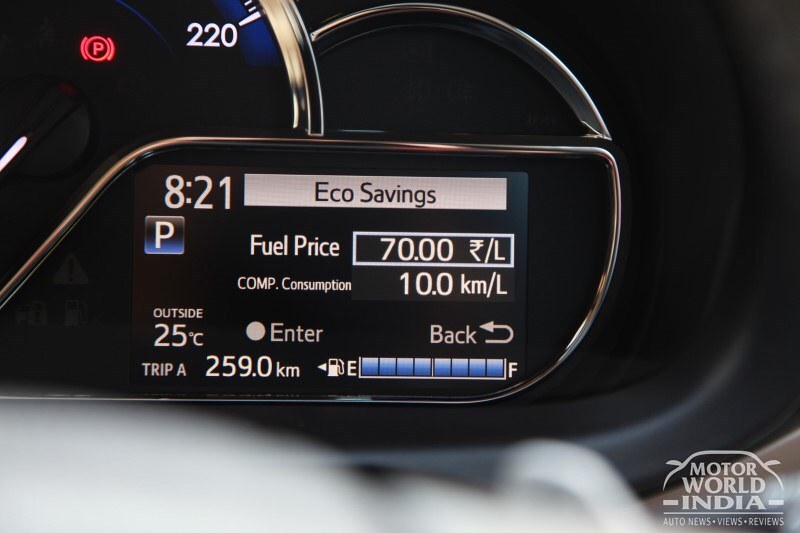 The Yaris has some unique convenience features that include rain-sensing wipers, auto headlamps, follow-me home headlamps, tyre pressure monitor to name a few. 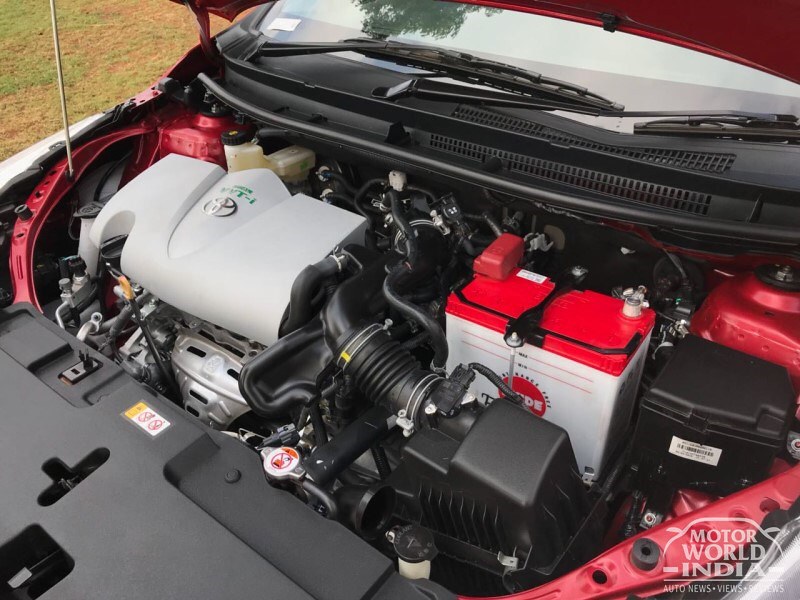 The Yaris get an-all new RNR family 1.5L petrol motor which pushes out an amazing 107PS of max power @6000rpm and a good 140Nm of torque @4200rpm. The motor itself is manufactured and sourced from Indonesia. The engine comes mated with a 6-speed manual gearbox and a 7-speed CVT-i automatic gearbox. The figures might not sound too great if you compare it with the competition, but it is finely tuned for power and frugality. On our 80kms drive to Nandi Hills and back, the motor never felt underpowered or went out of breath even in the hilly areas. Coming to the transmission… the 7-speed CVT-i was a breeze to drive within the city, the shifts are seamless and rev-needle mostly hovers in the range 1500-2500rpm under normal driving. 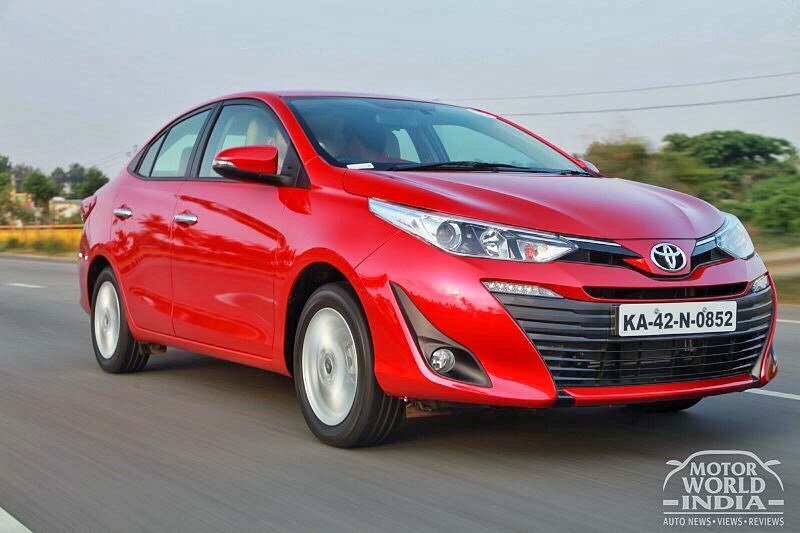 But if you decide to weigh down the accelerator pedal, you feel the rubber-band effect of the CVT-i transmission. The rev-counter shoots-up faster than the speedometer needle, thus making the overtaking a calculative task. However, the manual gearbox is exactly as an enthusiast would like the transmission to be. Short throws, slick shifts and positive feedback from the gears and the engine. The 1.5L engine shines and shows it’s prowess with the manual transmission. 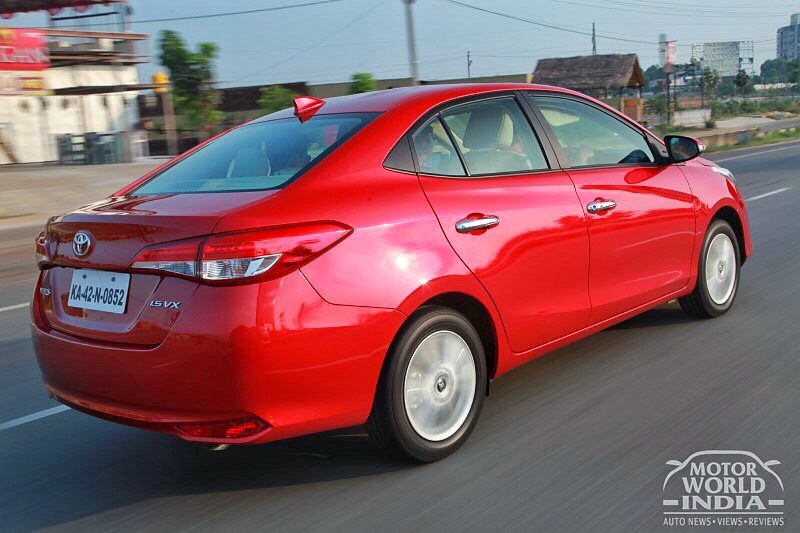 The cabin is very silent, thanks to some special sound damping material used by Toyota to keep out the undue adulations and harshness. The car feels planted at high speeds even while hard cornering. The all wheel disc brakes have a good bite and give a reassuring feedback during heavy braking. The Yaris has one of the best ride quality among its competition, the front Mac Pherson Strut with stabiliser, while the rear is torsion beam with stabiliser. The suspension is tuned in such a way that it tackles most surfaces with aplomb. We drove through some bad roads and the car didn’t budge, there was absolutely no noise filtering into the cabin. 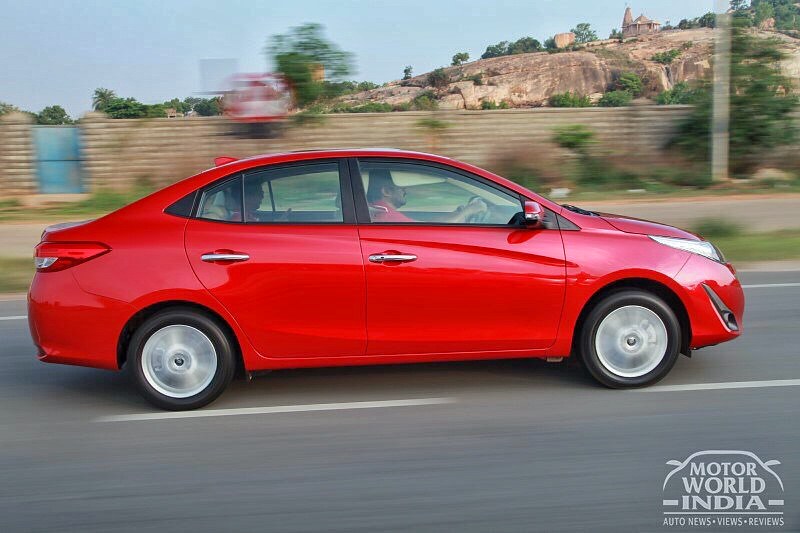 Toyota has loaded some long list of safety features onto the Yaris. The car comes with  Seven Air-bags as standard across the variants.  Then you have the Hill Start Assist Control, Vehicle Stability Control (TCS), ABS with EBD, Tyre Pressure Monitoring System, front and rear parking sensors, reverse camera to name a few. 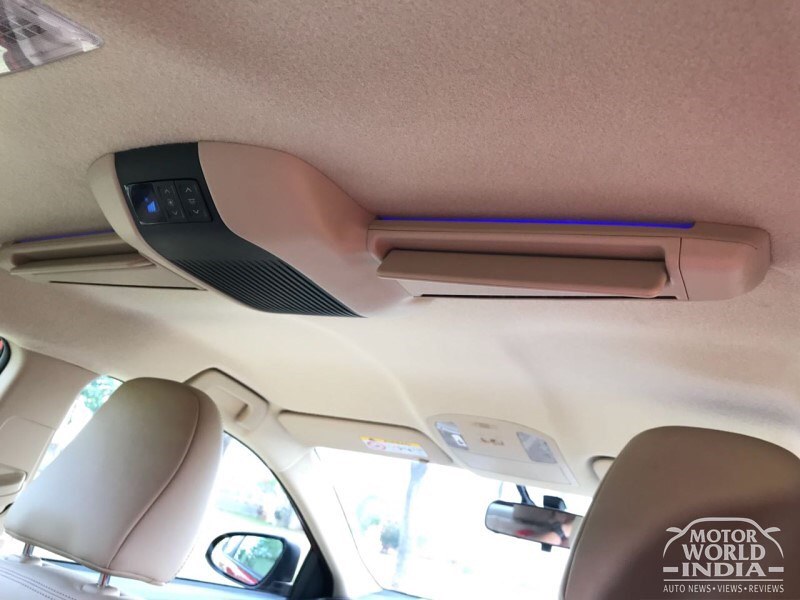 Toyota surely has another winner on their hands with the Yaris. Though they have entered the already crowded mid-sized sedan segment a bit too late, most of the features they’re offering with the car, are segment first. Petrol is the only option offered, which the consumers will have to deal with. But as per Toyota’s survey, the current trend is shifting towards Petrol cars due to the banning of diesel cars that may happen in the future, also to counter pollution, looks like they are on the right track. As it is Toyota as a brand has a huge brand loyalty. Buyer confidence  would also help the Yaris to succeed. The quality, fit and finish and low cost of maintenance are all the traditional USPs of the brand that could tilt the scale in the favour of the Yaris against the competition. 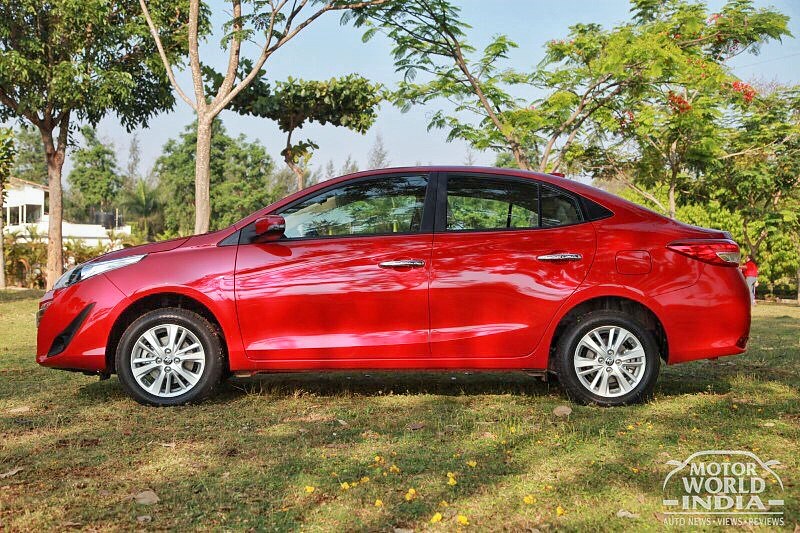 The Toyota Yaris price reveal and bookings would happen on the 25th of April, while the deliveries would commence after its official launch in mid May.

Watch this space for all price and booking details of the Toyota Yaris soon. 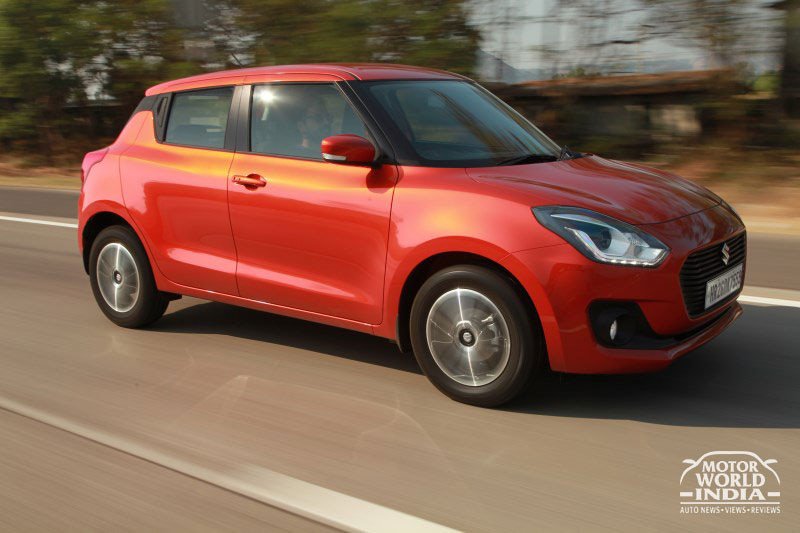 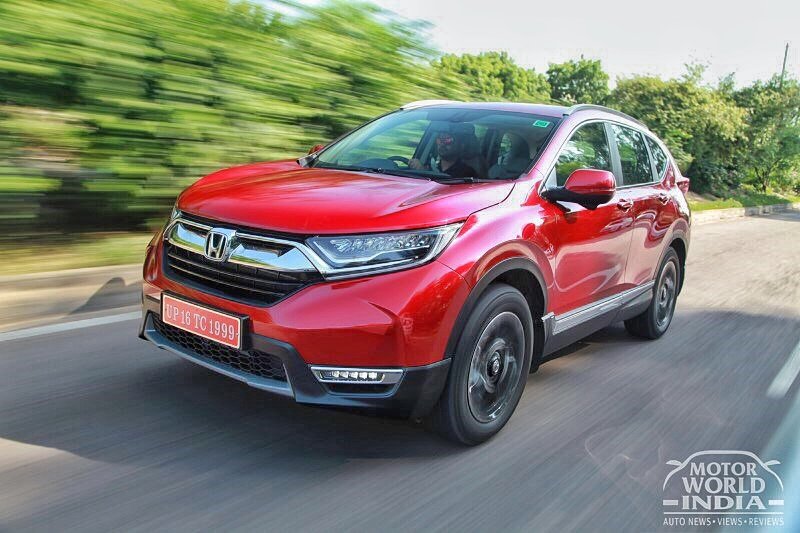