Nissan Kick started its Indian operations with the locally built Micra way back in 2010, though the company was incorporated in the year 2005 and offered a high-end SUV, the X-Trail and the Luxury Teana. A series of imported products were offered by the company until 2015. The company started manufacturing locally since 2010, together with its global alliance partner Renault, and offered locally manufactured passenger cars such as the Micra Active & Sunny, and also its top of the line sports car (imported) the GT-R, popularly known as ‘Godzilla’. Terrano is the only SUV in its line-up since 2013, as the X-Trail was discontinued in 2014 with dismal sales. Even the Terrano which shares the same platform with the cousin the Renault Duster was priced higher, and didn’t offer much in terms of features, equipment and it didn’t go well with the potential SUV buyers. It was high time that Nissan did something to revive the sales and attract potential SUV buyers. Nissan unveiled the exteriors only, of the all-new India specific Kicks in October 2018 at an event held in Mumbai. In December 2018, Nissan finally showcased the yet to be launched all-new Kicks in Bhuj, Gujarat. Read on further to know how the all-new Kicks really is, as we drive the car in the remotest parts of Kutch. 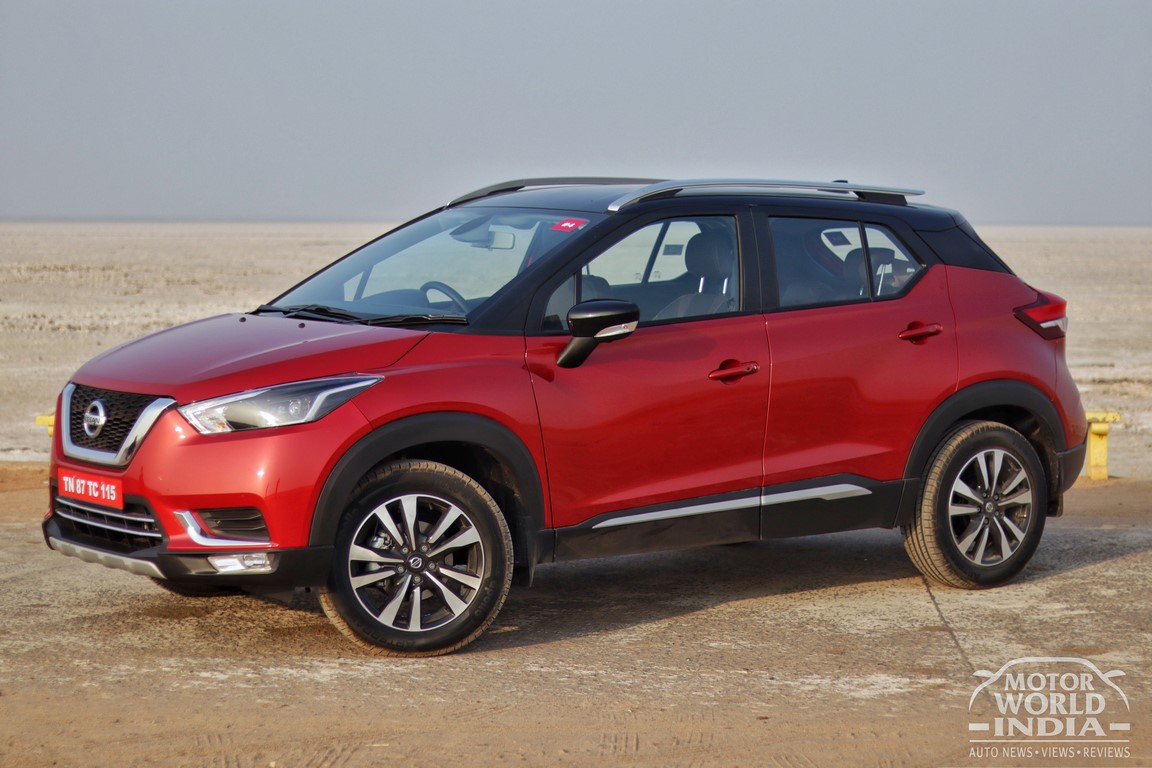 Exterior & Styling
The all-new Nissan Kicks looks stunning from the word go. It is quite different from all the other compact SUVs currently on offer. Even in the international market, the Kicks is based on the Micra’s platform, which is comparatively smaller. But the India specific Kicks is based on the bigger, better and more robust platform, which happens to be the Terrano. The front of the car is dominated by the Nissan signature V-motion chrome grille. The large Nissan logo sits right in the middle of the piano black honeycomb grille. 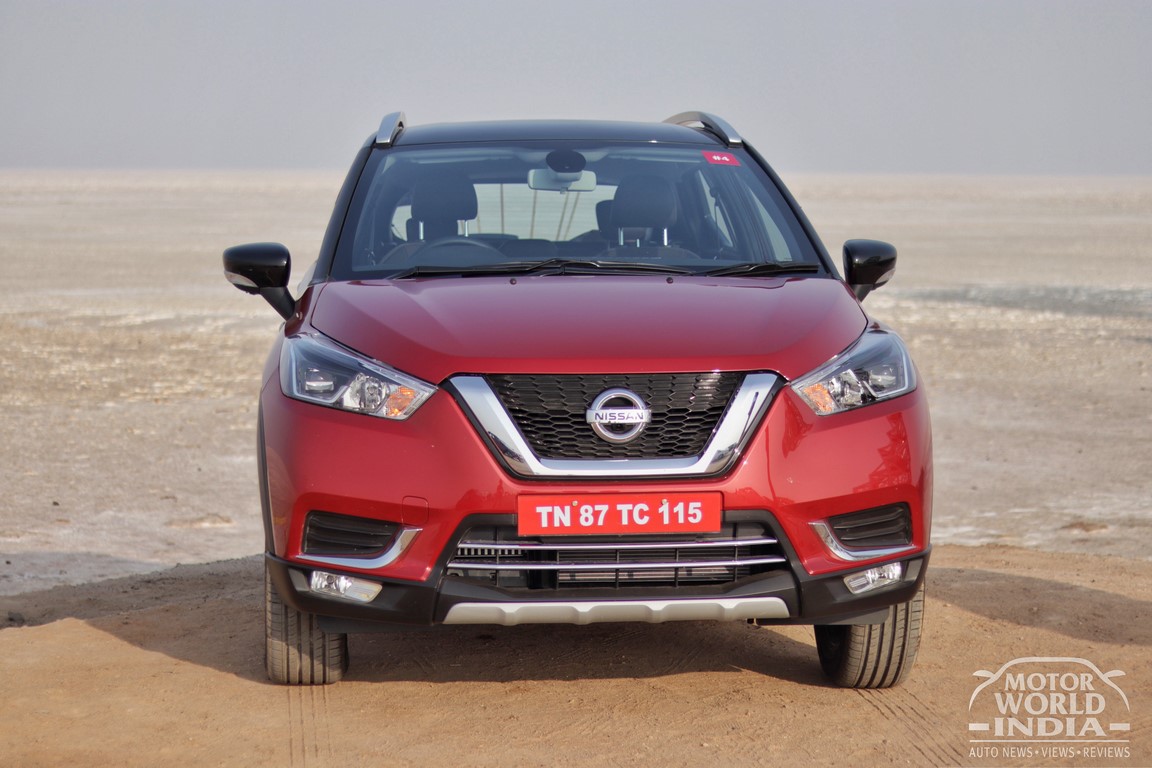 The lines on the flat and slightly raised bonnet perfectly complement the V-motion chrome grille. The smoked headlight cluster houses the LED projector headlamps (low-beam) and a multi-reflector halogen bulb (high-beam) and also the LED DRL’s. The dual-tone front bumper features a silver-coloured bash plate and right above it sits the massive chrome finished twin slat air-dam for the intercooler. The fog lamps are oddly placed on the lower end of the bumper; it also neatly houses the cornering lamps. Coming to the side, you’ll notice there are a lot of character lines which run all the way from the front fender, making their way through the doors all the way up to the rear fender and merging with the tail-light cluster. The flared wheel arches give the Kicks a solid and muscular stance. The 17-inch dual-tone diamond cut wheels come shod with 215/60 R17 tyres, which perfectly complement the pronounced wheel arches. 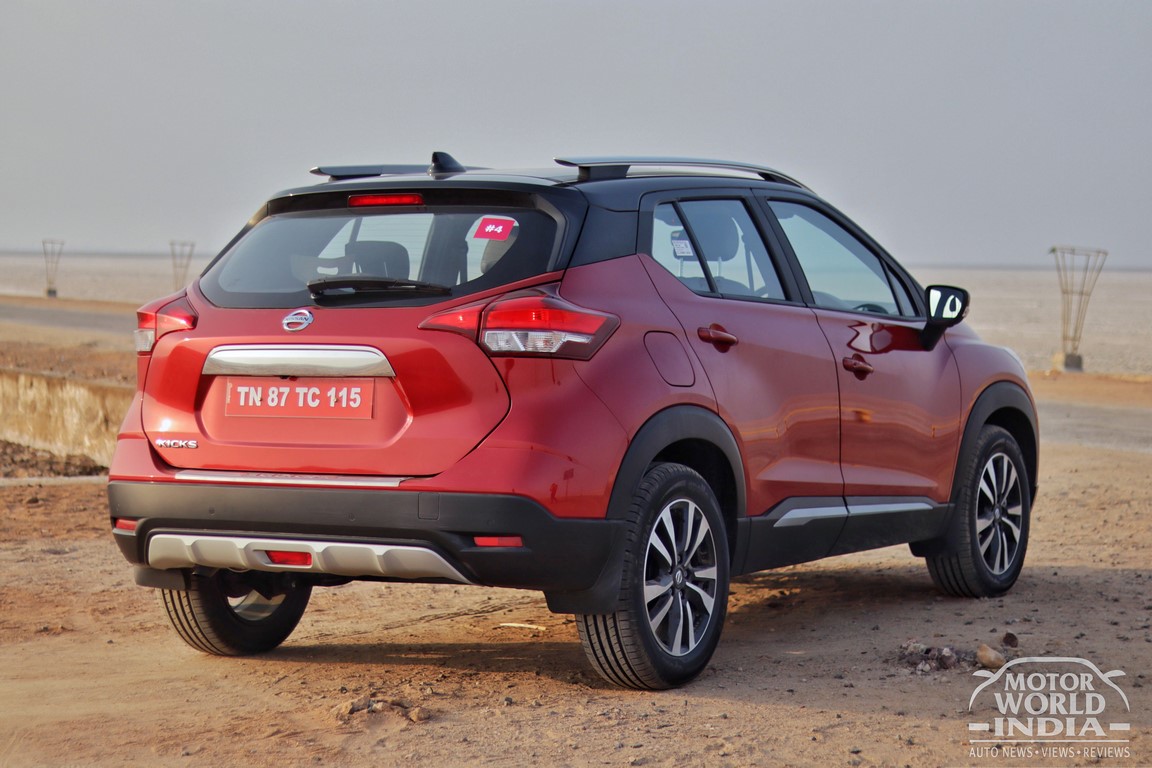 The lower halves of the doors get the matte black plastic cladding with an integrated thin silver coloured design element. The Kicks also features a floating roof-line perfectly in-sync with the current industry standards. The roof gets a shark-fin styled radio antenna and also features a roof rail which is not just placed there for aesthetic value, but is actually functional and can easily support loads of up to 100 kilograms. The rear of the Kicks is one of the best we’ve seen on a compact SUV. Be it the rakish rear windscreen, or the boomerang-shaped tail-lamps, the embossed skid-plate at the bottom of the tailgate or the dual-tone rear bumper with integrated silver finished rear bash plate. The designers must’ve spent a lot of time and put in a lot of effort to make it one of the best-looking rears (no pun intended). 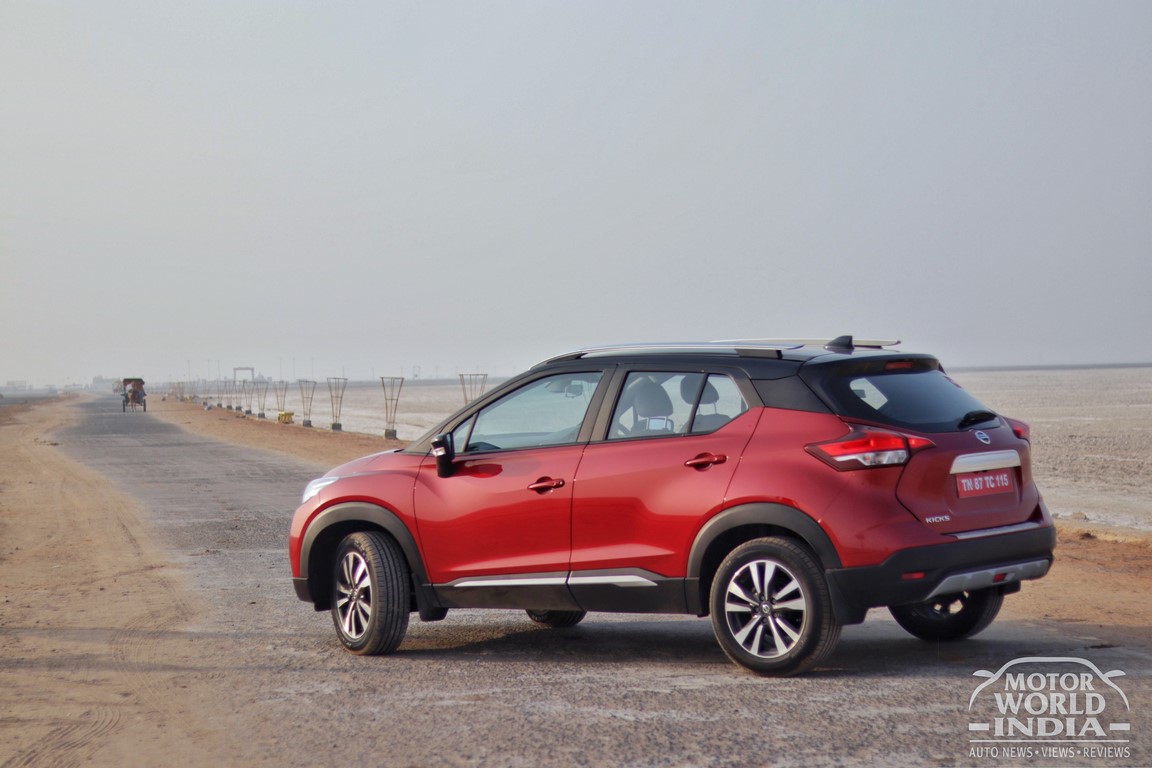 Interior & Safety.
Step inside the Kicks and the first thing you’ll notice is the massive 8-inch touchscreen infotainment system and the dual-tone brown and black interior theme with carbon fibre finish. The instrument cluster is simple with all the tell-tale lights, yet sporty with an analogue tachometer and a digital speedometer. The dashboard is a mix of soft-touch plastic and leather, which again is a rare sight in the compact SUV segment. All the door panels get the same dual-tone brown and black theme with leather inserts and carbon fibre finish. Even the front and rear seats are quilted and perforated with the same brown and black coloured leather. The front seats are well contoured and bolstered in the right places, supporting the driver and co-passenger well. 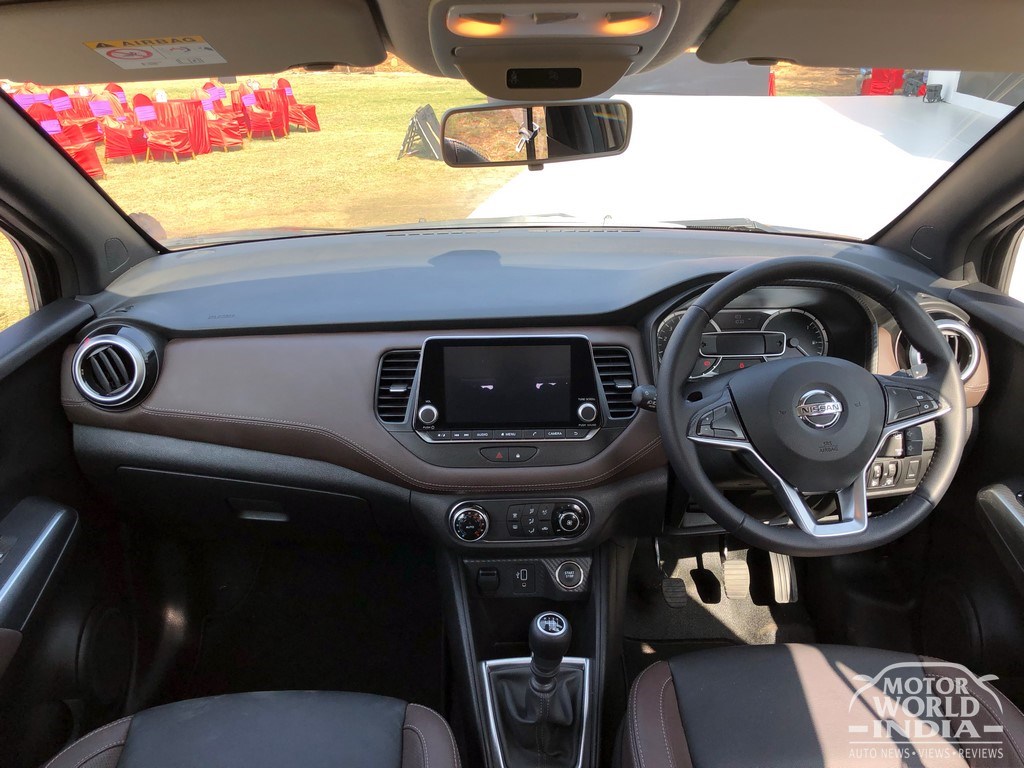 The rear seats on other hand are quite upright for our liking and are best suited for two fully grown passengers, also the under thigh support could have been better. Anything beyond two passengers and there could be elbow and shoulder ‘wars’ at the rear. Thankfully there are aircon vents to cool down the rear passengers if things get heated up. The Kicks offers first-in-class automatic climate control as standard equipment across all variants. The floating 8-inch touchscreen infotainment system supports Apple CarPlay, Android Auto and first-in-class NissanConnect with SmartWatch connectivity. Yes, you read that right; you can connect your SmartWatch independently, without having the need to connect it via the Smartphone. The glove box is well lit, cooled and is very deep but is narrow because half of it is utilised as a fuse-box. 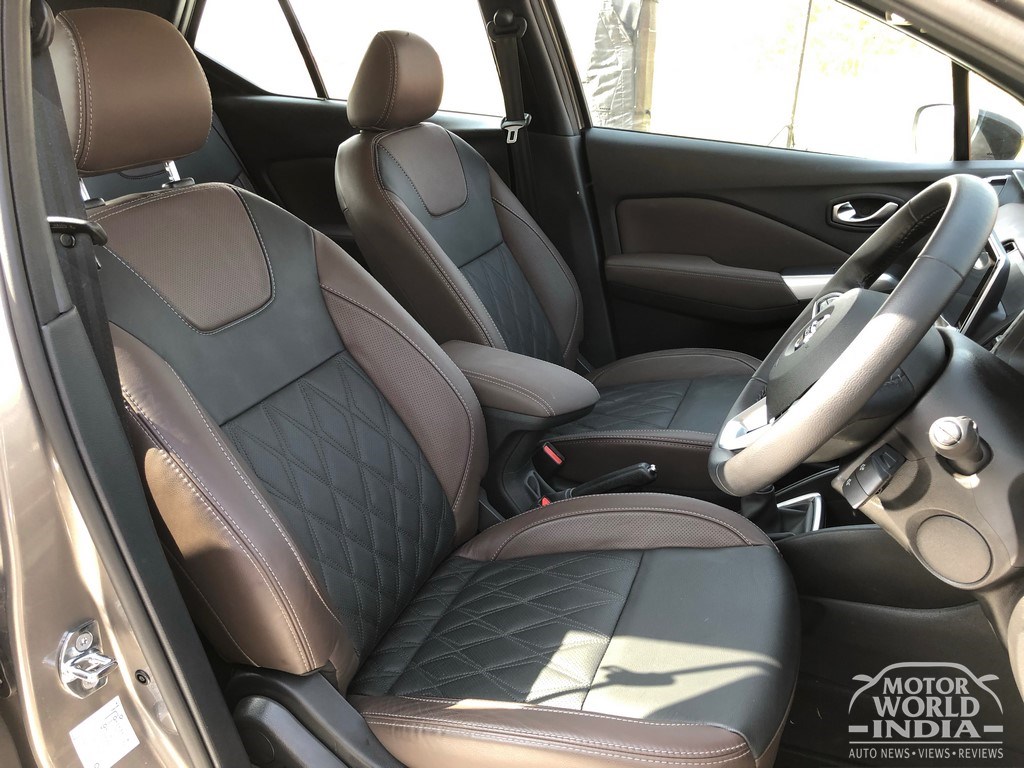 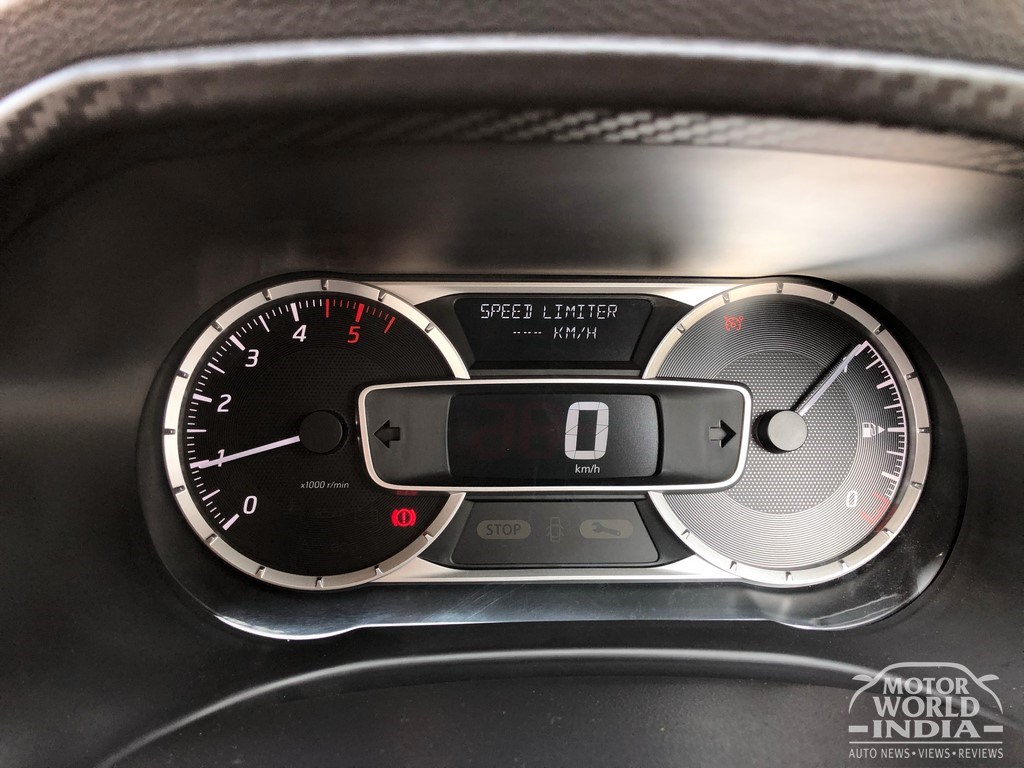 On the safety and technology front, the Kicks comes equipped with Brake Assist and ABS with EBD, four airbags, Hill start assist, Vehicle dynamic control, Smart vision with Auto headlamps, front & rear fog lamps, rain sensing wipers and the first-in-class main highlight; Around View Monitor 360-degree Camera. Yes, there are four strategically placed cameras; the first camera is neatly hidden within the Nissan logo on the front grille, second and third cameras are placed below the ORVM’s on either side of the car and the fourth camera is placed under the chrome strip right above the rear number plate. All these cameras give you a 360-degree view of the surrounding area on the 8-inch touchscreen display which in our opinion is extremely helpful not only while reversing, but also while manoeuvering the car through tight spaces. 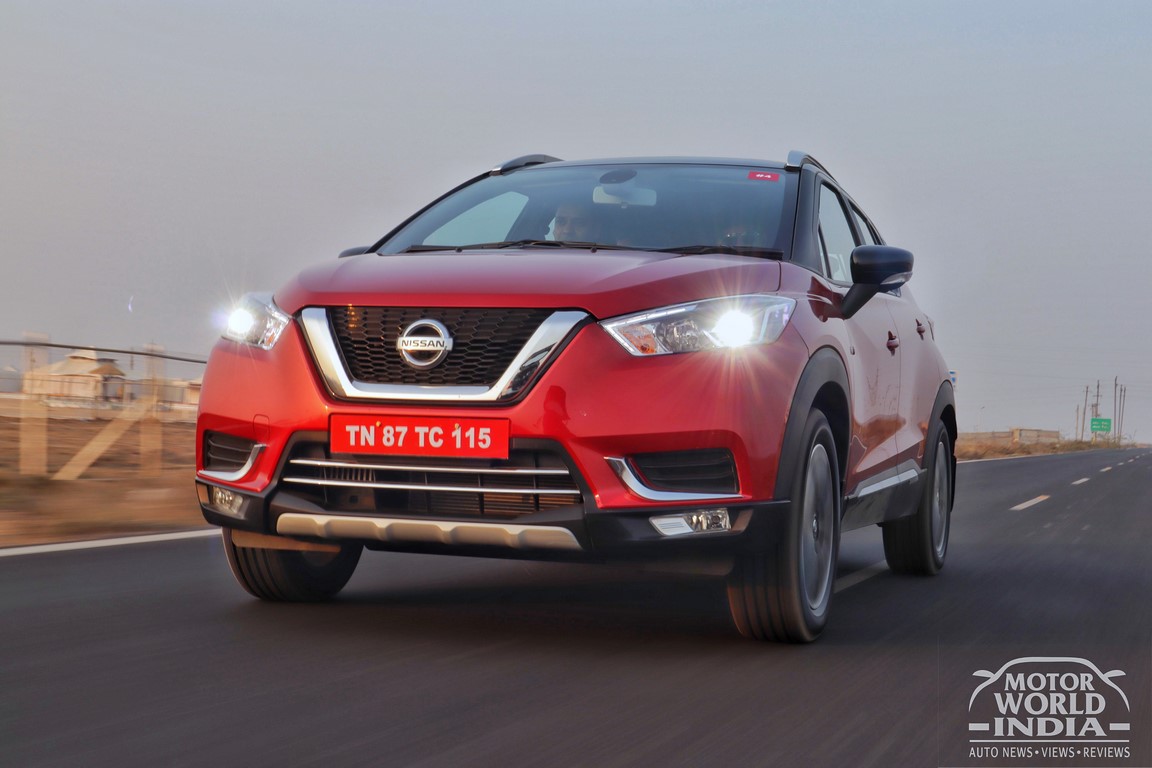 Engine, Transmission & Drive
The all-new Nissan Kicks comes with two engine options; the 1498cc H4K petrol in-line 4 cylinders which develops 106 PS @ 5600 RPM and churns out 142 NM of torque @ 4000 RPM and the same tried and trusted 1461cc K9K dCi diesel in-line 4 cylinders, which pushes out 110 PS @ 3850 RPM and churns out a healthy 240 NM of torque @ 1750 RPM. The petrol motor is mated to a 5-speed manual transmission while the diesel motor is mated to a 6-speed manual transmission. Only the diesel-powered Kicks were made available for the media drive. Maybe the company wants to push the diesel Kicks more than its petrol counterpart. The Kicks offers adequate performance from the tiny 1.5L diesel engine. 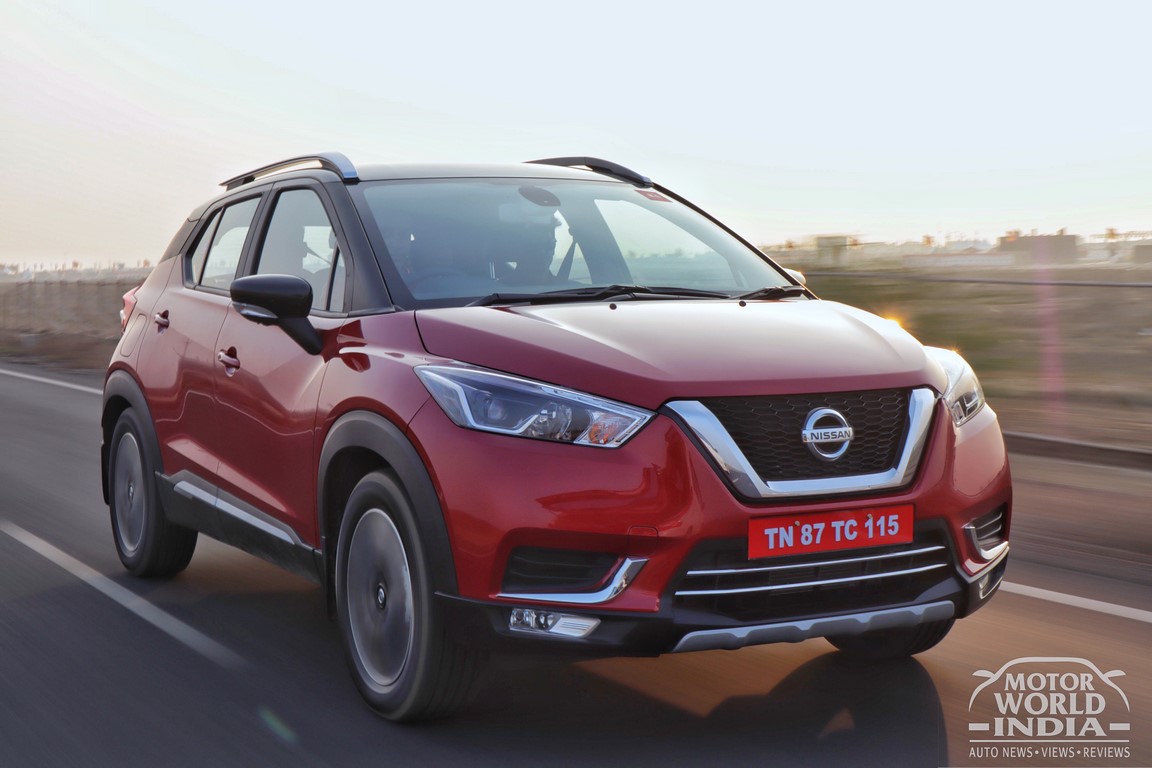 It is smooth to drive and there is very little engine noise within the cabin. Step out of the car and the diesel clatter is quite evident. On the move, the Kicks handles most surfaces with ease all thanks to the suspension which is sprung slightly on the softer side. The Kicks handled the worst of roads with ease without unsettling the passengers and thanks to its 210mm of ground clearance, handling the mountainous speed breakers (that we missed) without breaking a sweat. There is minimal turbo lag, but the car doesn’t like to be driven in higher gears at low speeds. You need to constantly keep changing the gears while driving within the city. Thankfully, the hard clutch which the Terrano and Duster were known for, has been fixed on the Kicks to a great extent; it is now light and progressive. The steering weighs up well at high speeds and the feedback is good. 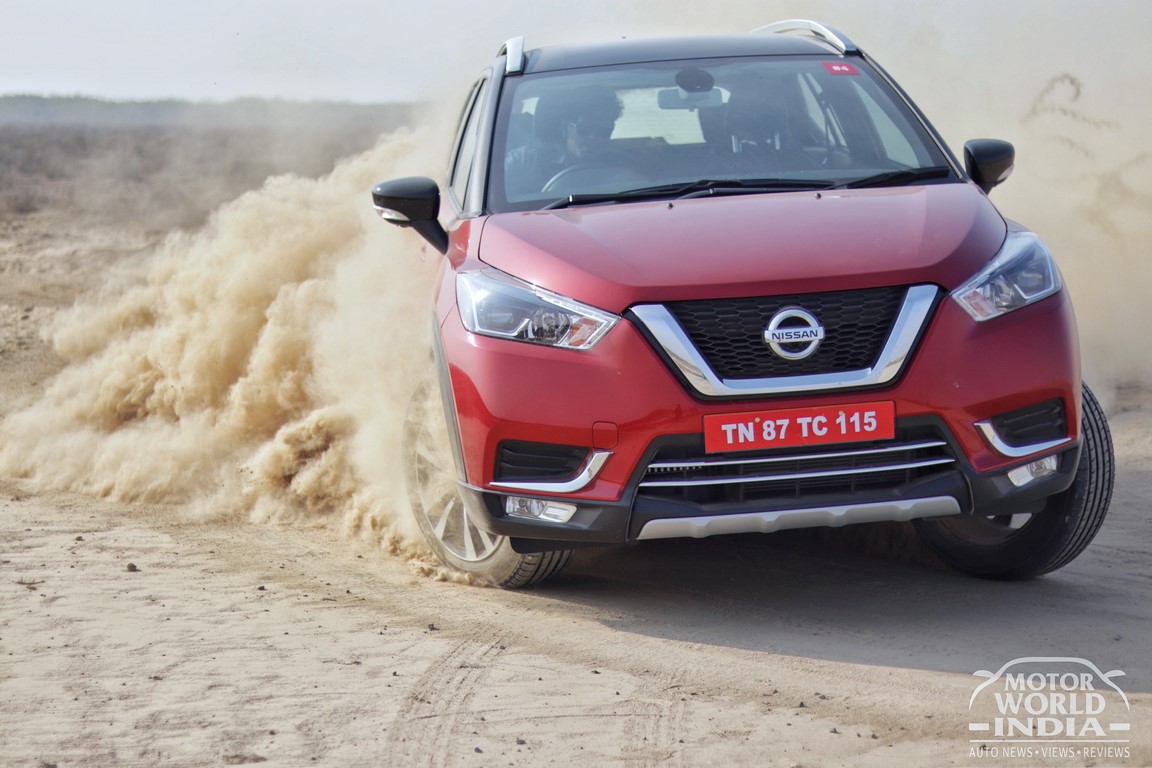 The Kicks had no issues handling high speeds of over 150 kph on flat surfaces, but as soon as the surface gets undulating the steering gets slightly vague. Thankfully, the brakes on the Kicks are good and help bring the car down to sane speeds in no time. The projector LED low-beam is bright enough and has a good spread covering the entire road and the halogen powered high-beam completely brightens up the road further ahead, making it one of the best headlights in its segment. 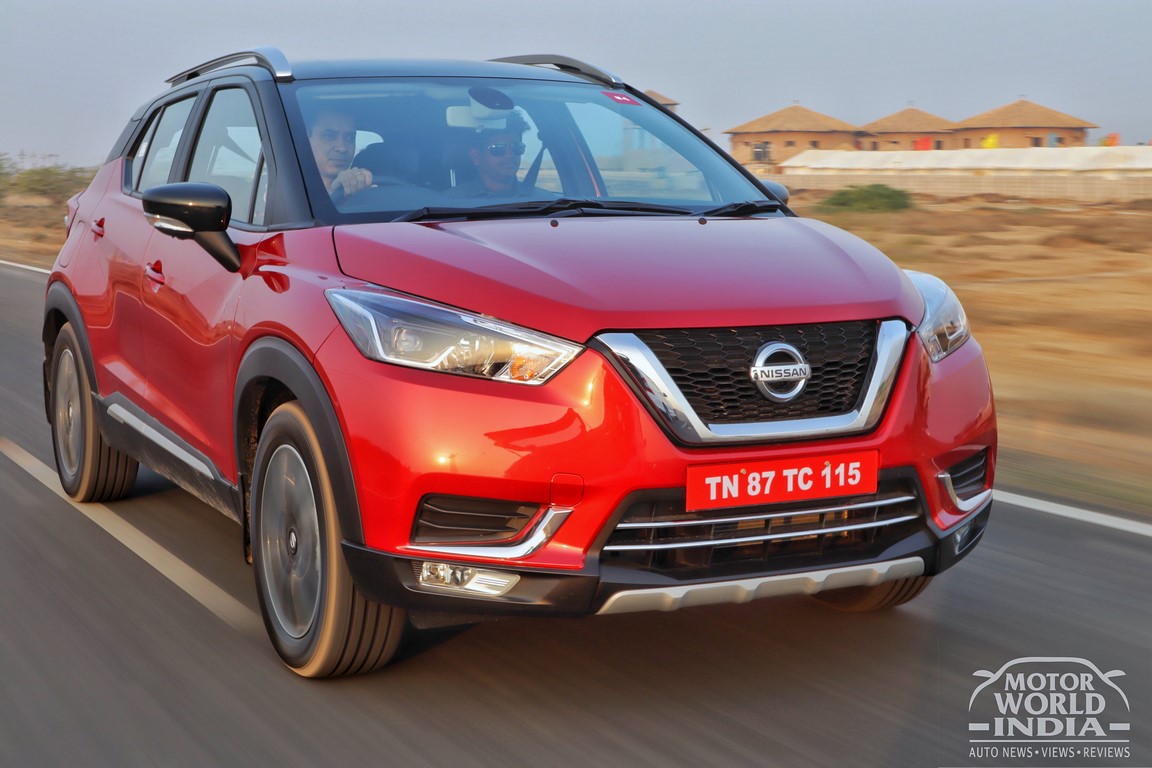 Verdict
The all-new Nissan Kicks is loaded to the brim with a lot of first-in-class set of features. Dimensionally, it’s the largest SUV in the segment, even bigger than the Hyundai Creta. Yet, it has some shortcomings with regard to the cabin space and some quirky bits here and there. Nissan has finally come up with a worthy competitor in the already crowded compact SUV segment. We, at Motor World India don’t see any reason for the Kicks to not do well. Now it all depends upon how well and aggressive the pricing is. We just hope Nissan comes up with a surprise pricing package and no one can stop the Kicks from kicking some serious A$$! 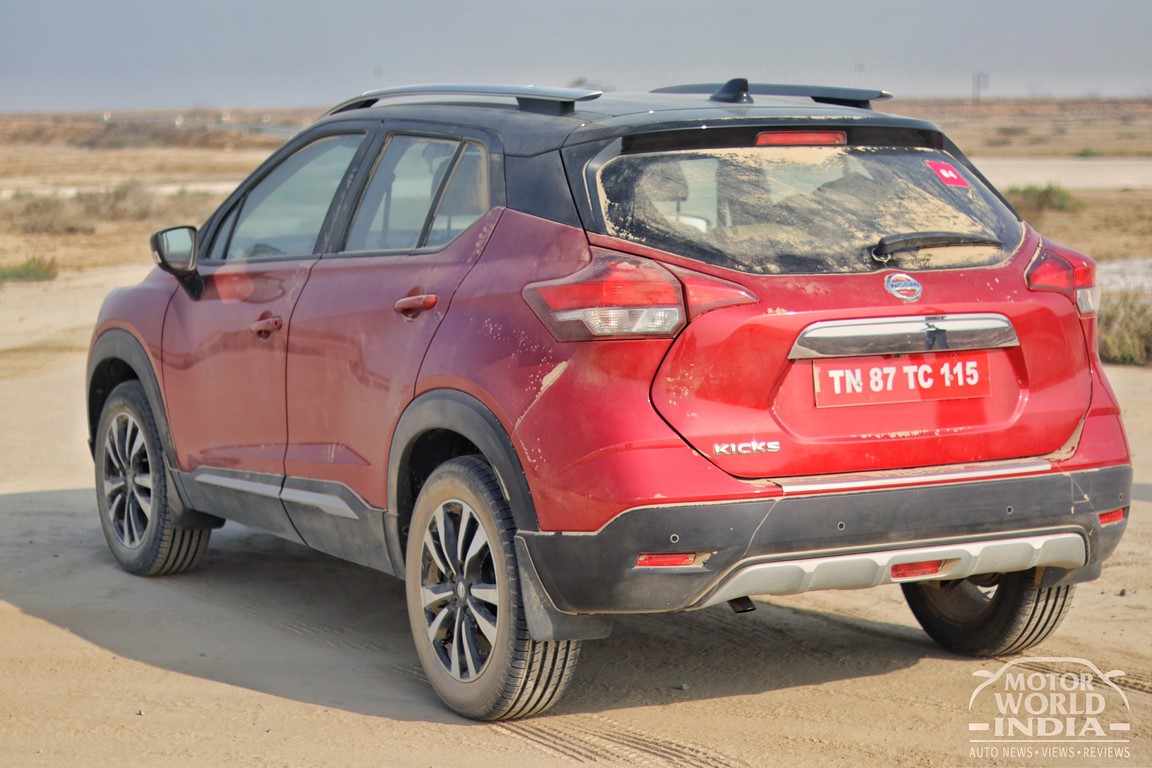 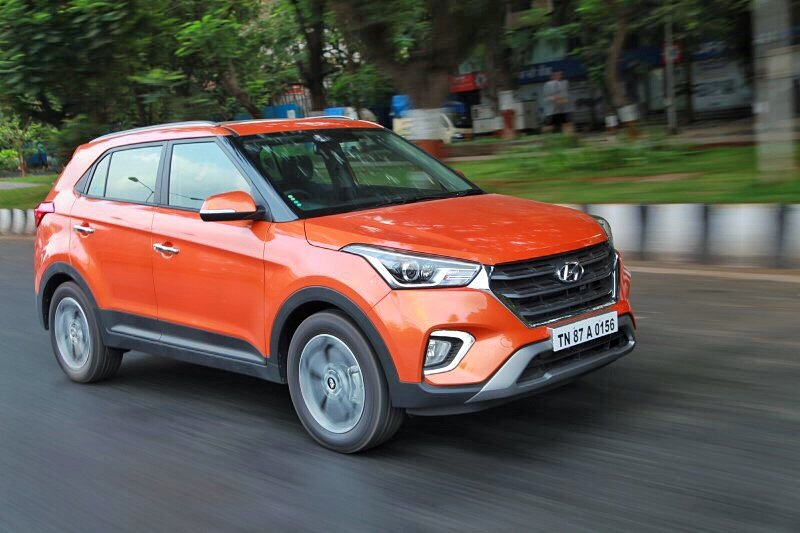 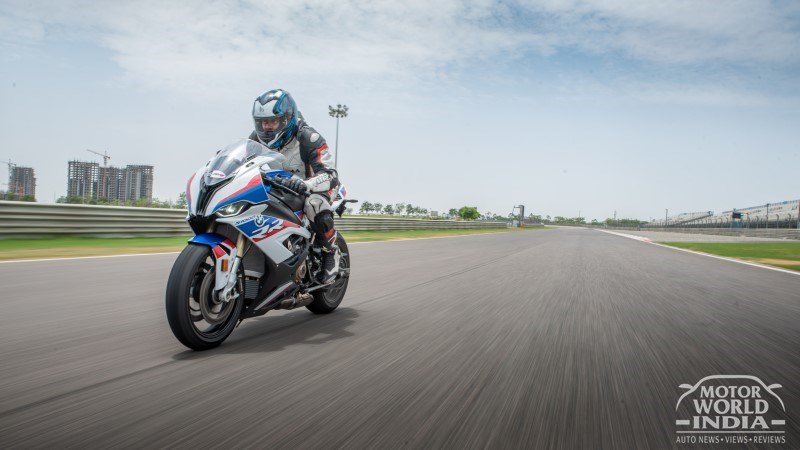 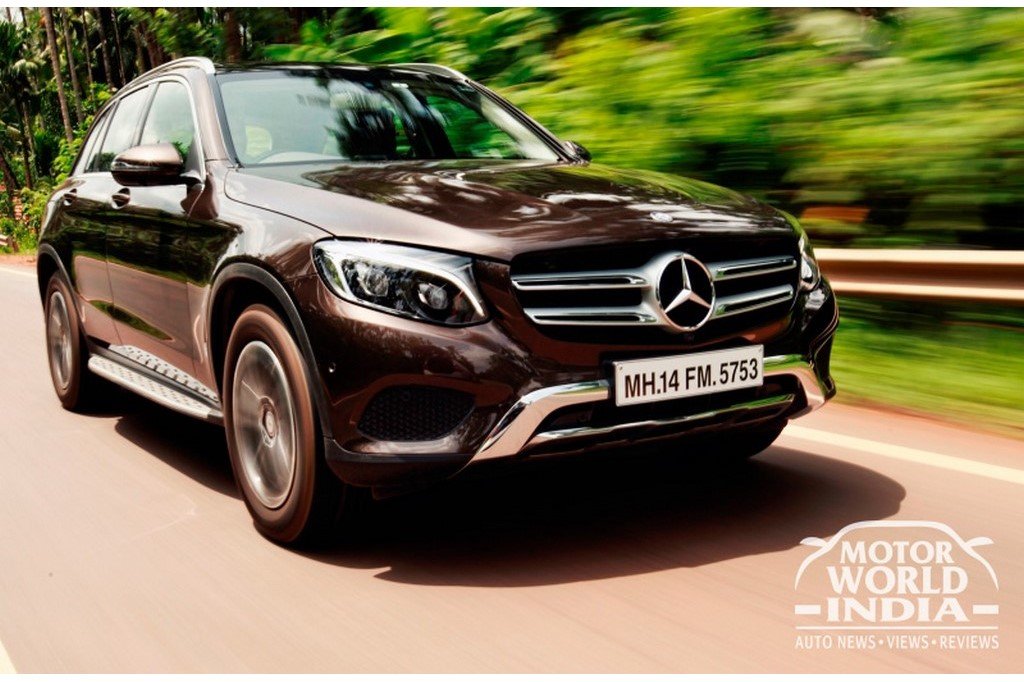