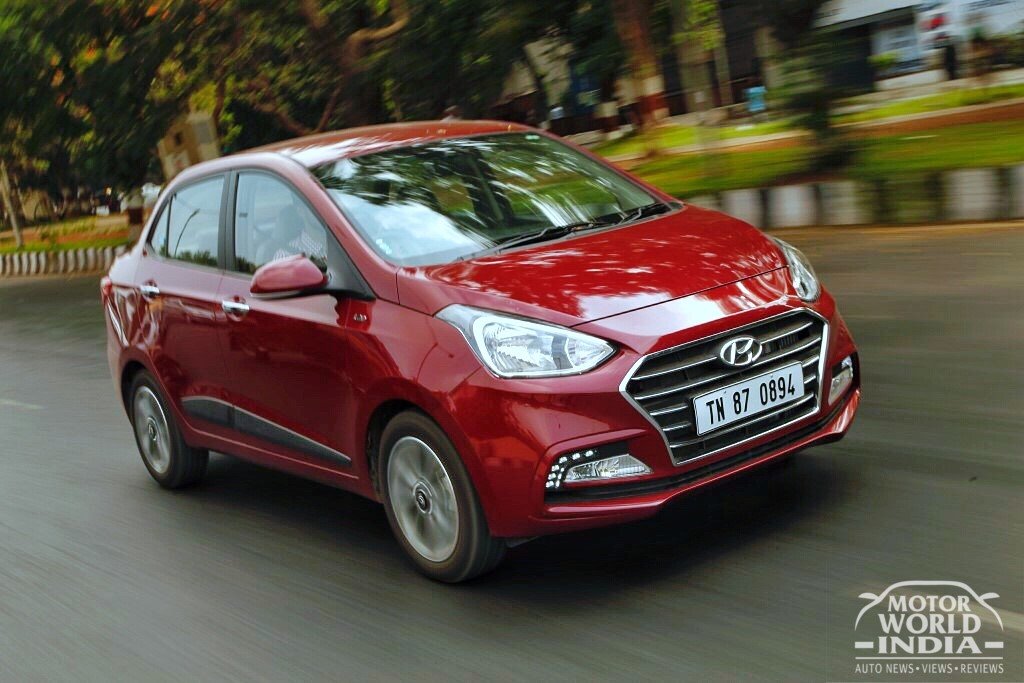 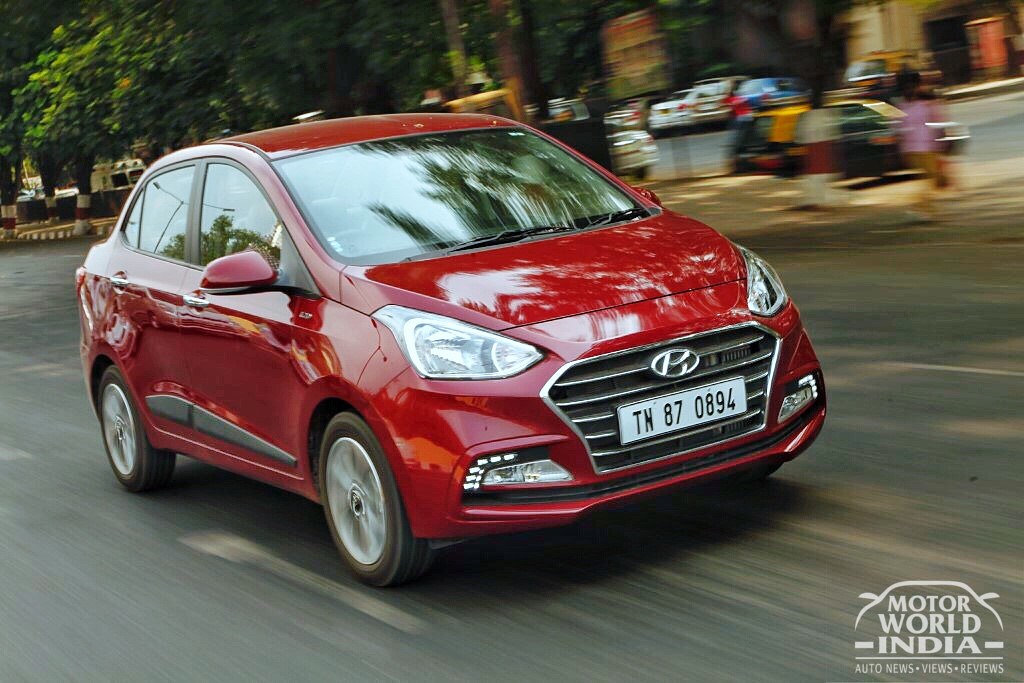 If you remember, Hyundai had a car model called the Accent in India. The Accent was an handsome Executive Sedan for its time that sold very well till it was replaced by the Xcent in 2014. Hyundai premiered the Xcent in India even before its global debut. The Xcent was based on the Grand i10 Hatch. Recently Hyundai face lifted the Grand i10 and now the Xcent gets a major facelift. We got you the news story live from Delhi on the launch of the New Xcent. Here, we have a detailed road test review for this latest offering from the Korean car maker. Read on as we find out what really has changed and how good this major facelift really is. 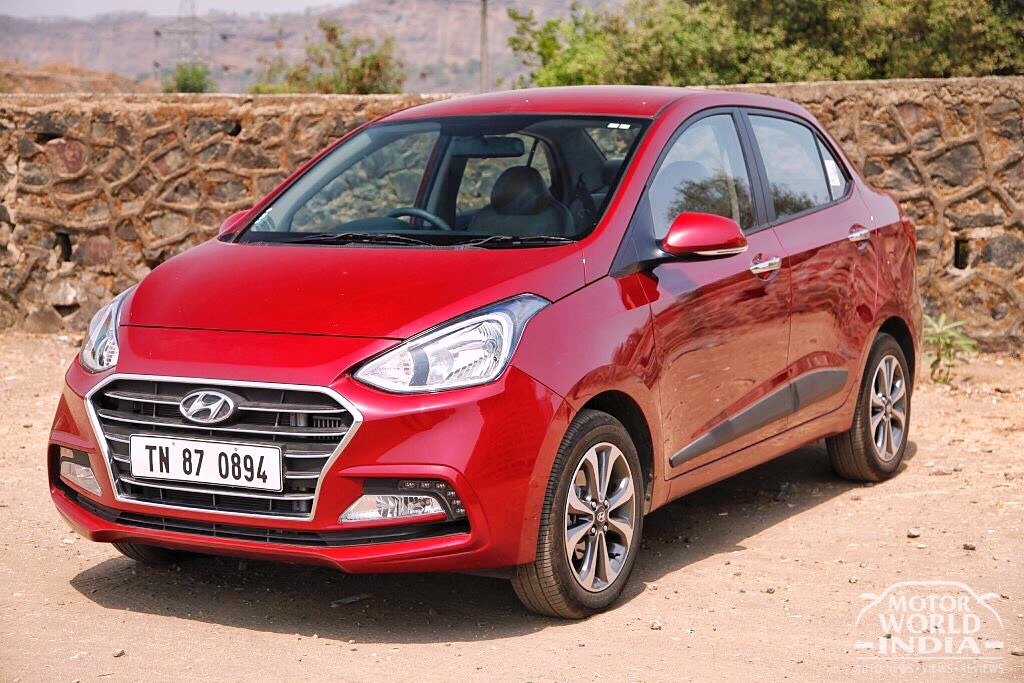 On the outside, the 2017 Hyundai Xcent looks a lot different when compared to the outgoing model. The design theme on this one is more mature and larger-car like. While the older Xcent looked more or less same as the Grand i10 with a boot plunked on, with the new one Hyundai has tried and in fact succeeded rather well in giving the Xcent a separate unique identity to it. The front now gets the ‘Chrome Cascading’ design grill similar shaped like the one on the Elantra with a chrome surround border line and five horizontal black strips with chrome striping on them. The front bumper too, gets a redesign that makes it look sharper and wider. A new set of boomerang-shaped LED day time running lights get placed on this new design bumper. Gone are the old round fog lamps, neat-looking wide extended design fog lamps come placed next to the DRLs. The headlights remain the same and so does the bonnet design. 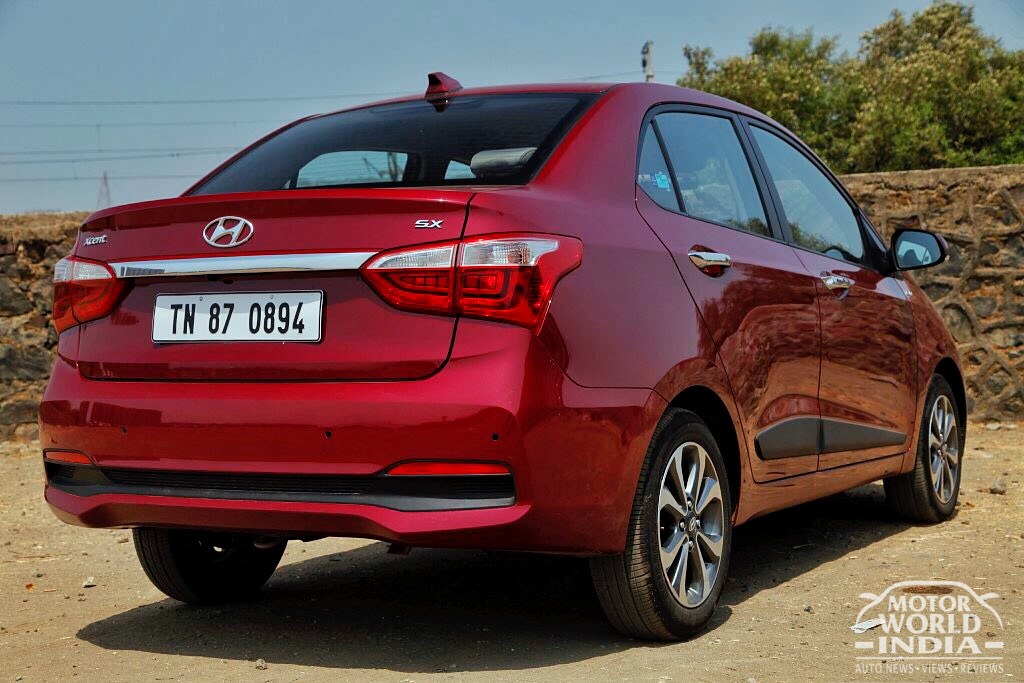 The side profile is unchanged and continues to come with chrome grab type door handle with keyless entry on the driver’s side, auto fold-unfold electric wing mirrors with LED turn lights mounted on them and blacked out window frame as earlier. New design Diamond Cut alloys mounted on Bridgestone B250 175/60R15 spec tyres make the sides look fresh. The rear profile gets the overhaul like the front. Major changes include an all new set of tail lights that are sharper looking and extend themselves on the boot lid giving a neat broad look to the rear profile. There’s a thick chrome strip that mates the tail lights running just above the license plate. The rear bumper is all new, now comes with a sharp design, black inserts and reverse parking sensors placed on it. The roof gets a Shark-Fin radio antenna. Overall on the outside the 2017 Hyundai Xcent now looks more mature, more like a larger sedan than it actually is and a lot more premium too. 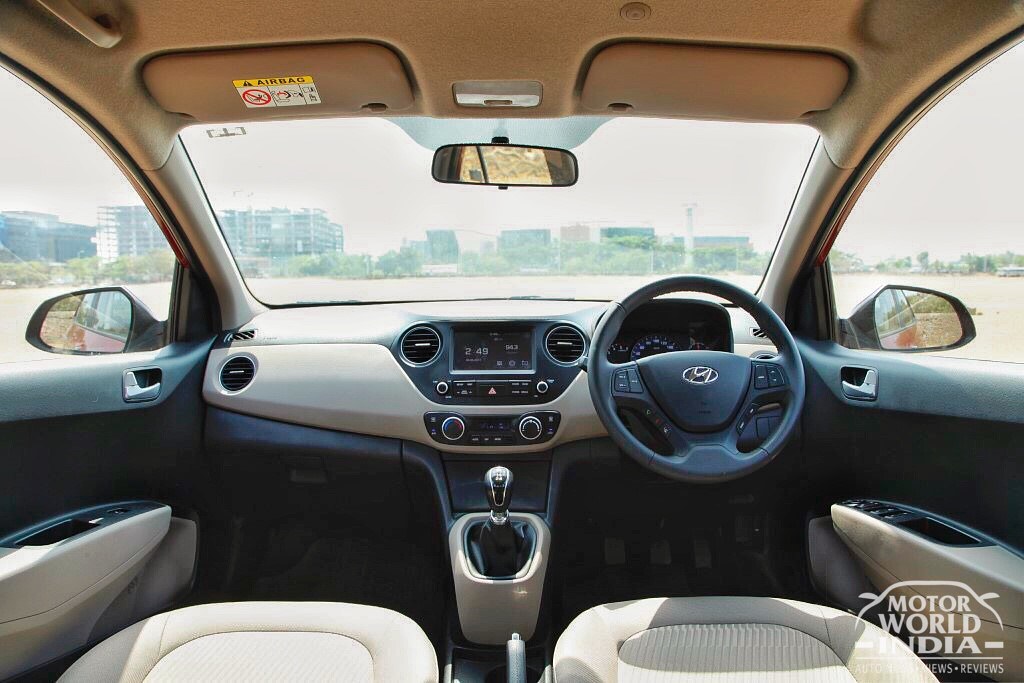 Inside the 2017 Hyundai Xcent, the cabin area also gets a lot of tweaks. Firstly and note-worthily the quality and fit finish feels far more premium and of good quality. The dual tone dashboard retains its earlier design but now comes with an 7-inch infotainment color touch screen head unit. This display unit is very intuitive to use and easy to read. You get Apple CarPlay, MirrorLink connectivity on it along with the usual Bluetooth streaming, FM, USB, AUX in it. This screen also doubles up as the rear view display when in the reverse mode. 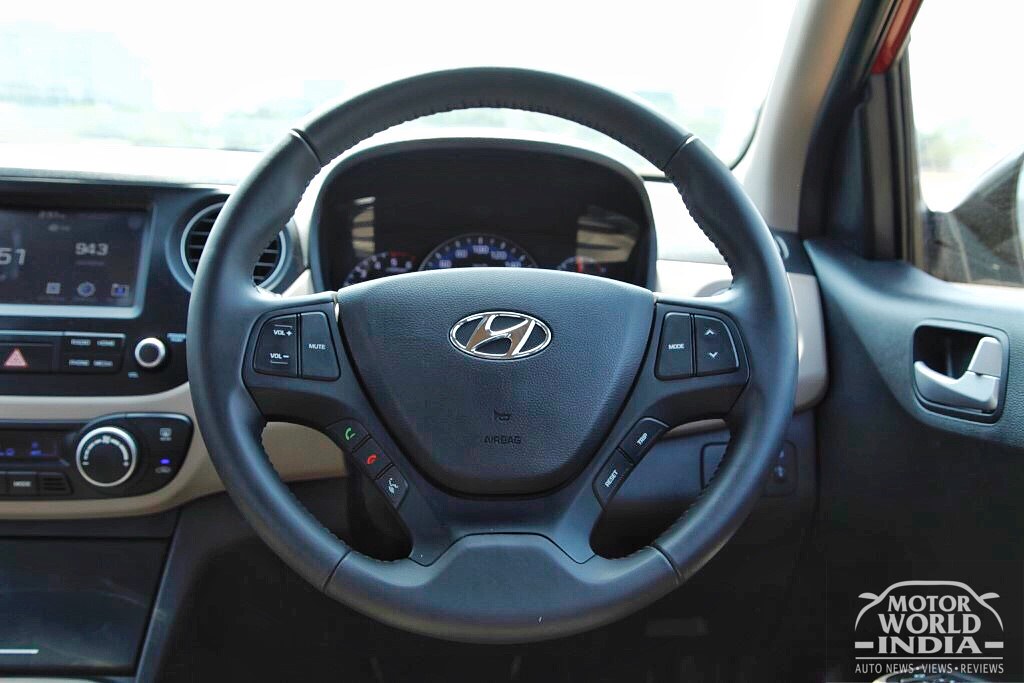 The steering comes with leather wrapping and feels extremely well made. Height adjust is available on this steering which also gets multi function control buttons along phone control buttons placed on it. Engine start/stop button comes in the package. Aircon unit is a single zone system with digital controls and also a rear blower placed between the front seats. Instrumentation is carried forward from the earlier model and is clear to read. Seats get a different shade and design of upholstery. A new gear shifter comes in place and we just love its comfortable positioning and its crisp shift feedback. 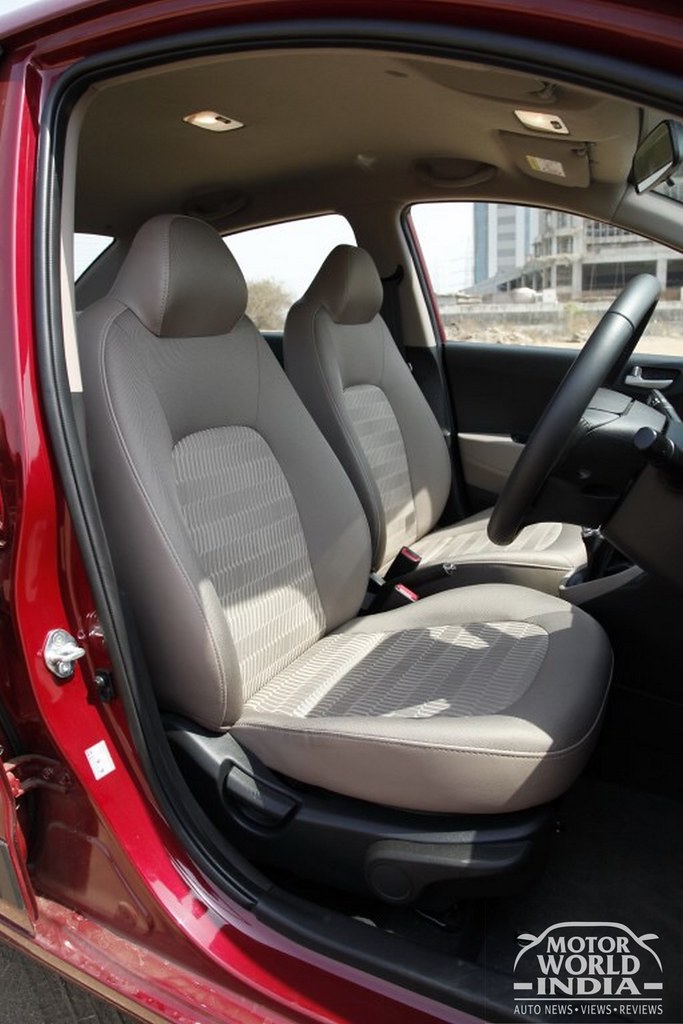 Driver’s seat comes with manual height adjust. Dead pedal is sorely missed while the pedals are ergonomically placed. Front seats still continue to get the unified headrests that are merged to the seats. Front seating is extremely comfortable with lots of knee, head and shoulder room for its class. Rear seats get a folding armrest along with adjustable headrests. Rear seating is comfortable for two with good amount of head, knee, leg and shoulder room. 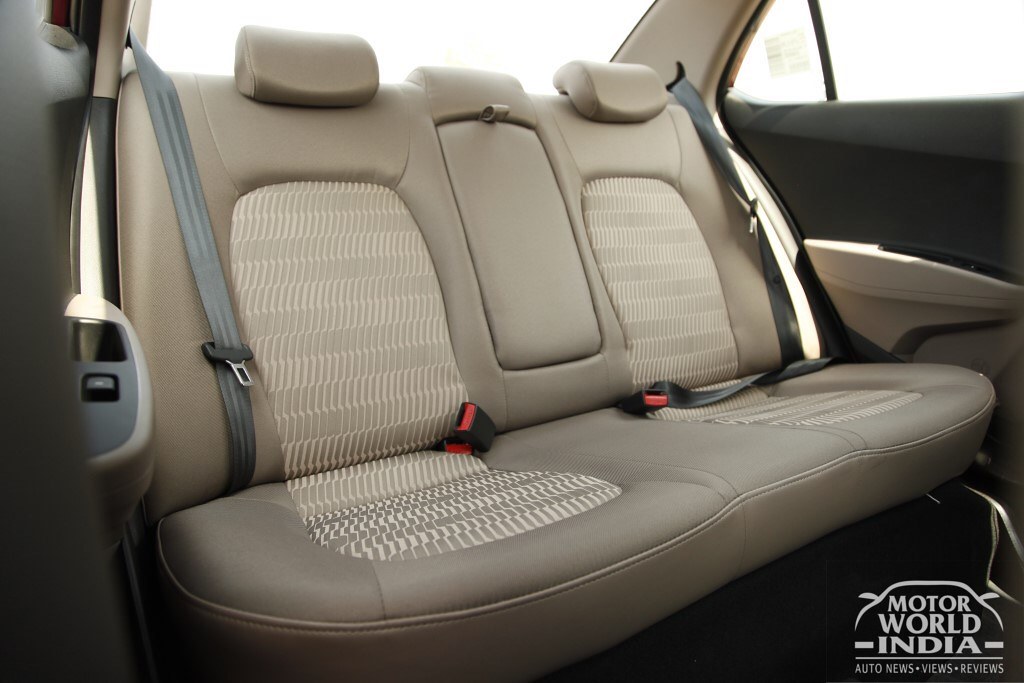 Rear passengers also get the now so very important mobile charging point. Seats come with map pockets and the doors have the needed bottle holders. A practical and large boot space of 407 litres still comes on the Xcent as earlier. Overall the 2017 Hyundai Xcent gets a well appointed and good quality cabin with the 7 inches infotainment system being its highlight. 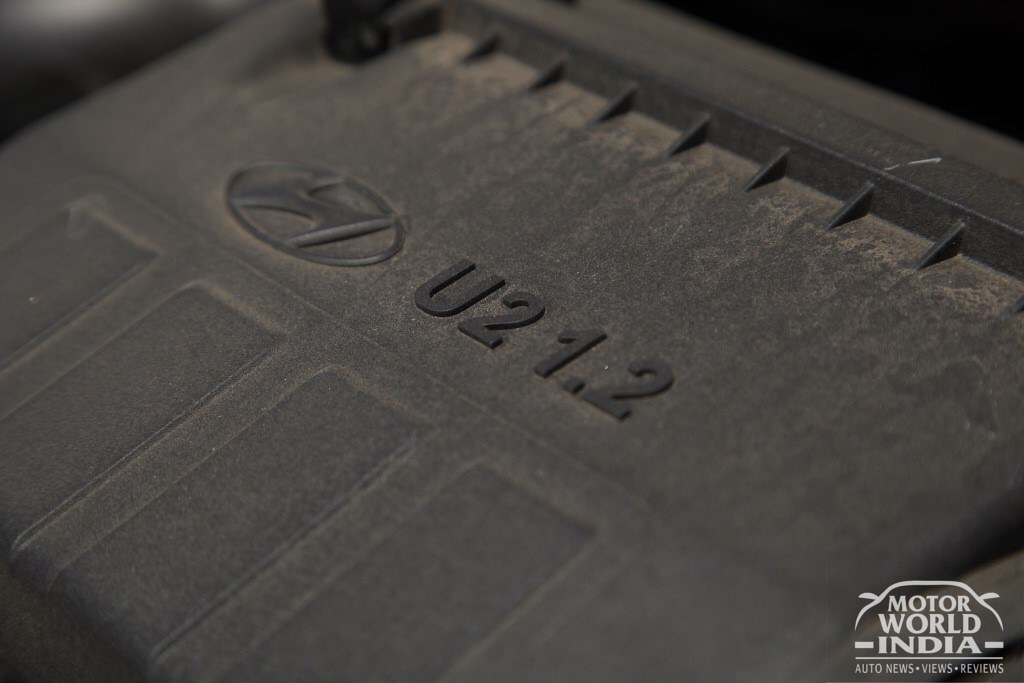 The 2017 Hyundai Xcent comes in a choice of Petrol and Diesel engines. The Petrol engine remains the same 1.2L Dual VTVT Kappa engine (83 PS power & 113 Nm torque)) with options of 5-speed manual and 4-speed Automatic while the Diesel engine gets an upgraded 1.2L U2 (75NM power & 194Nm torque) engine mated to an 5-speed manual transmission. 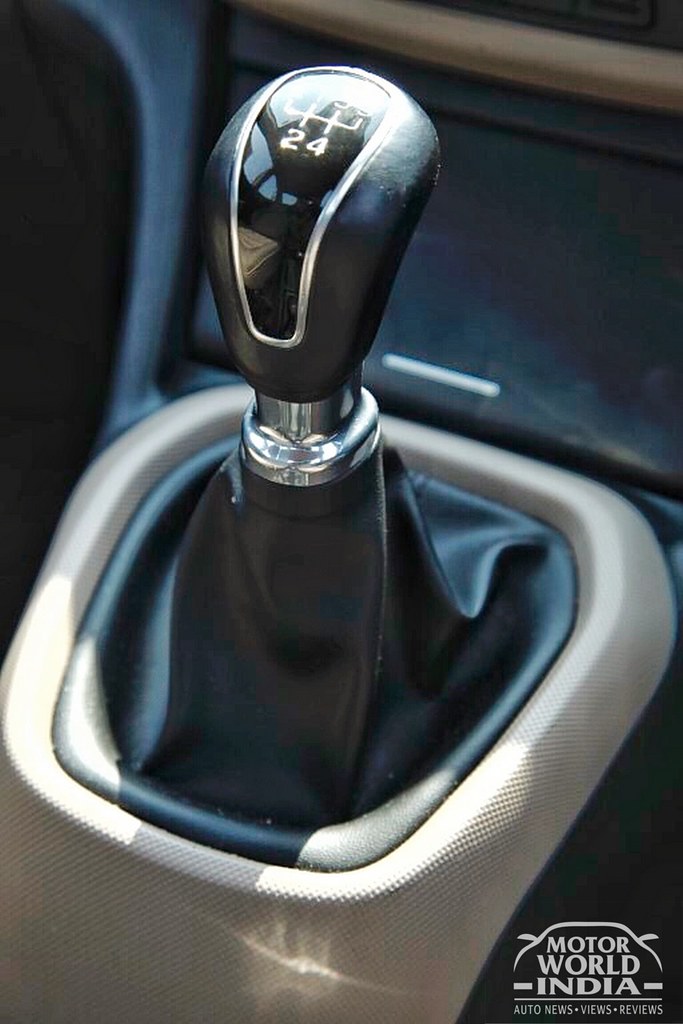 We drove the Diesel version of the Xcent. This is a 1186cc, 3-cylinder unit that has been heavily upgraded over the older engine with increased 4 PS of power and a bump of around 30 Nm of torque over the older diesel engine. When you fire the engine, the first thing that comes to your notice is the engine refinement and the high quality cabin insulation. The engine is very drivable and the super slick gear shifting is plain joy to use. The power delivery comes in at a low as 1200 RPM and there is good amount of torque available at all speeds. 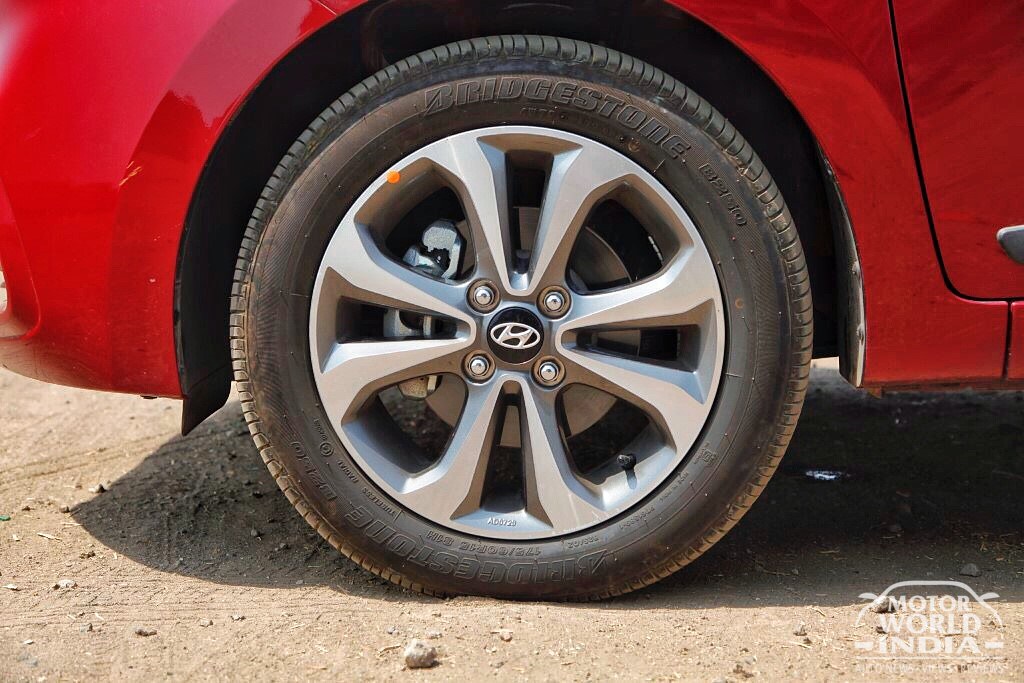 You feel a sudden surge of power kicking in at around 3500 RPM that pulls the car right until the 4000 RPM. With the update, the 2017 Hyundai Xcent never felt out of breath while overtaking or while cruising at high speeds. Steering is nicely weighted and the drive feel now is more like a much larger sedan. The suspension setup is now tuned very nicely and the car glides over bad roads and undulations with sheer ease. With the engine upgrade Hyundai claims a better fuel efficiency and better performance figures and yes, the car now feels a lot faster and fun to drive. 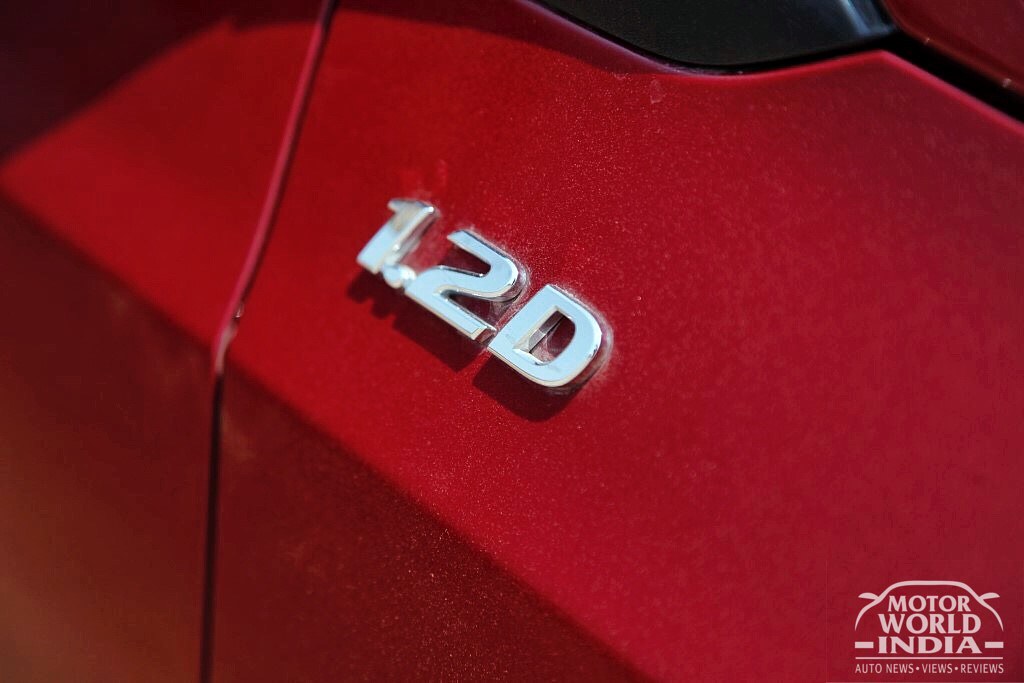 The Xcent has come a long way, right from its Accent days to the 2017 Xcent currently. With this big update Hyundai has changed the Xcent’s overall attributes, the car now has its own identity and is not dependent on the Grand i10 for it. The 2017 Hyundai Xcent looks more mature and large with the update and also drives a lot better and we simply fell in love with the slick gear shifter. The addition of the touch-screen infotainment system is a big plus and so is the updated diesel engine. With all these USPs the 2017 Hyundai Xcent is one of the better buys in its segment currently. 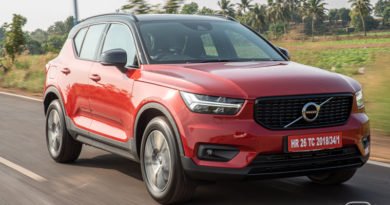 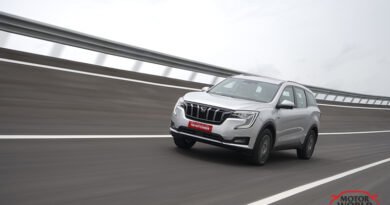