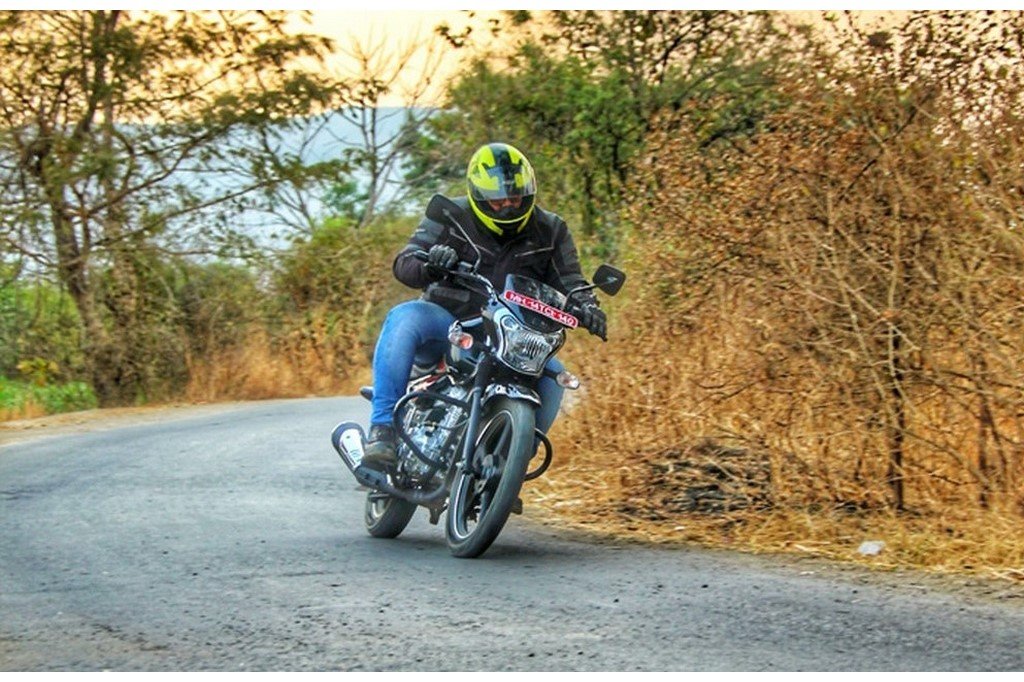 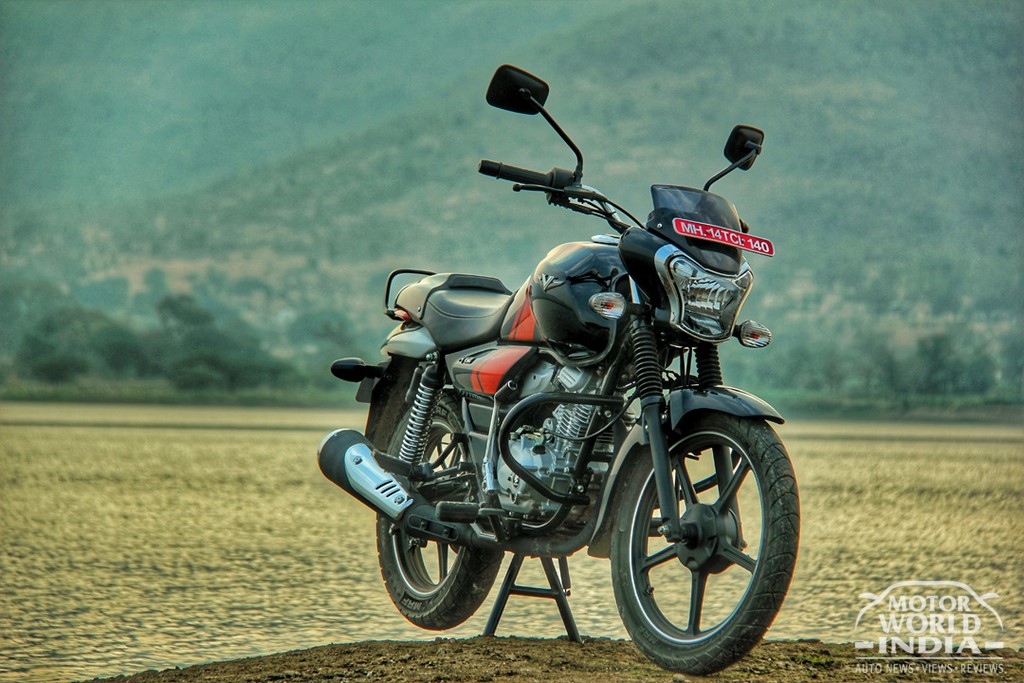 We have just ridden the new Bajaj V12, younger sibling of the V15, the latest 150cc offering from the Bajaj stable. The V15 was positioned below the Pulsar Range and above the Discover Range of motorcycles. The V12, like its sibling, would use the scrap metal from the INS Vikrant, India’s first aircraft carrier that recently was scrapped. Knowing this has surely awakened a feeling of patriotism in us. Going further, thanks to the effective marketing and social campaigns by the Bajaj team, they have surely introduced the V15 in a grand way to the public. 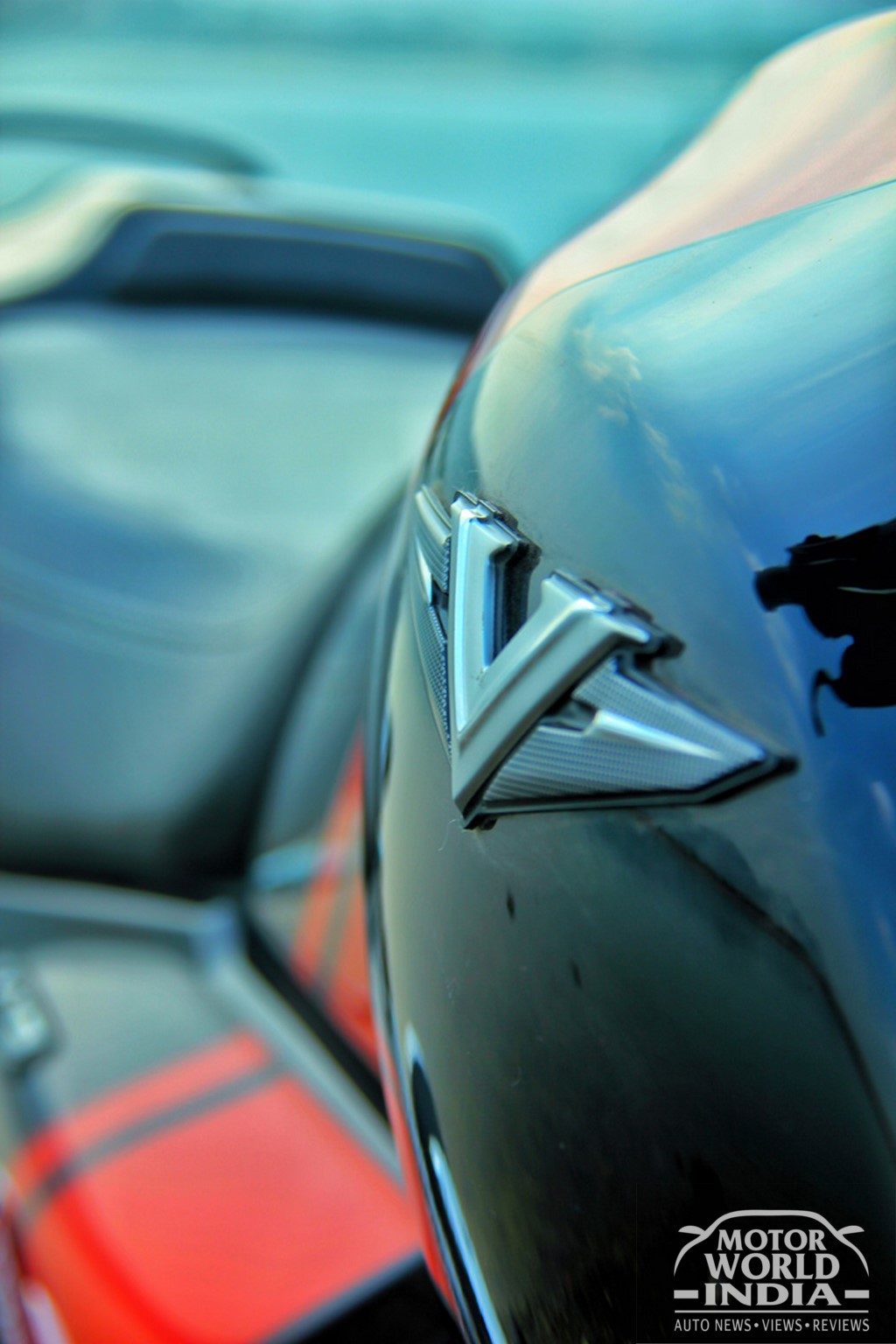 We always knew that the V12 was in the making, but how, you may ask? Bajaj has a history of manufacturing and offering a family of Branded bikes, say for the Pulsar family, Discover Family, Avenger Family, etc, going with that, it was obvious that Bajaj would be launching a few more bikes in the ‘V-Family.’ Answering the next part of the question, reading the current sales figures and market shares, it was more than evident that Bajaj had to strike in the 125cc segment, which is currently dominated by Honda Shine, Hero Glamour, Passion etc. Also, since ages, Bajaj has always had a twin product strategy in each segment. Like the Pulsar 150 had a Avenger 150, Pulsar 200 had a Avenger 200, Discover 150 had V15 to target the executive commuter segment. Likewise, Bajaj always had this gap to fill in the 125cc segment, where the Discover 125 last updated in 2015 was finding it hard to put up a fight.

All said and done, let’s talk about our ride and what we feel about the Bajaj V12. 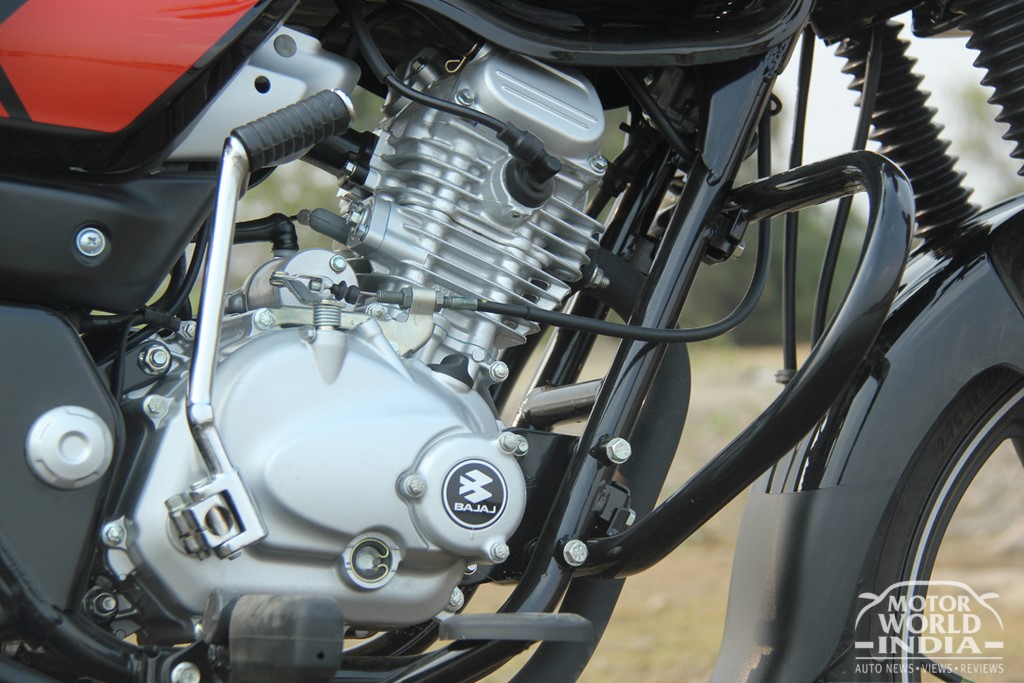 The Bajaj V12 comes home-equipped with the all new 125cc engine having a compression ratio of 9.8:1, producing power figures of 10.7 PS at 7500 RPM, the maximum in the category and equal to the mill on the Honda Shine. Torque figures are 11Nm at 5500 RPM, the maximum in the category, beating the next competitor by a good 0.7 Nm, all this by the virtue of a long stroke piston. The V12 uses a 52mm (Bore) x 58.6mm (Stroke) bore piston. This long stroke piston helps the V12 in producing that torque and initial power in the lower band of rpm. This 125cc mill is mated to a 5-speed gearbox and wet multi plate type clutch plates. The power is distributed across the lower and mid range to provide ample power to commute efficiently daily. 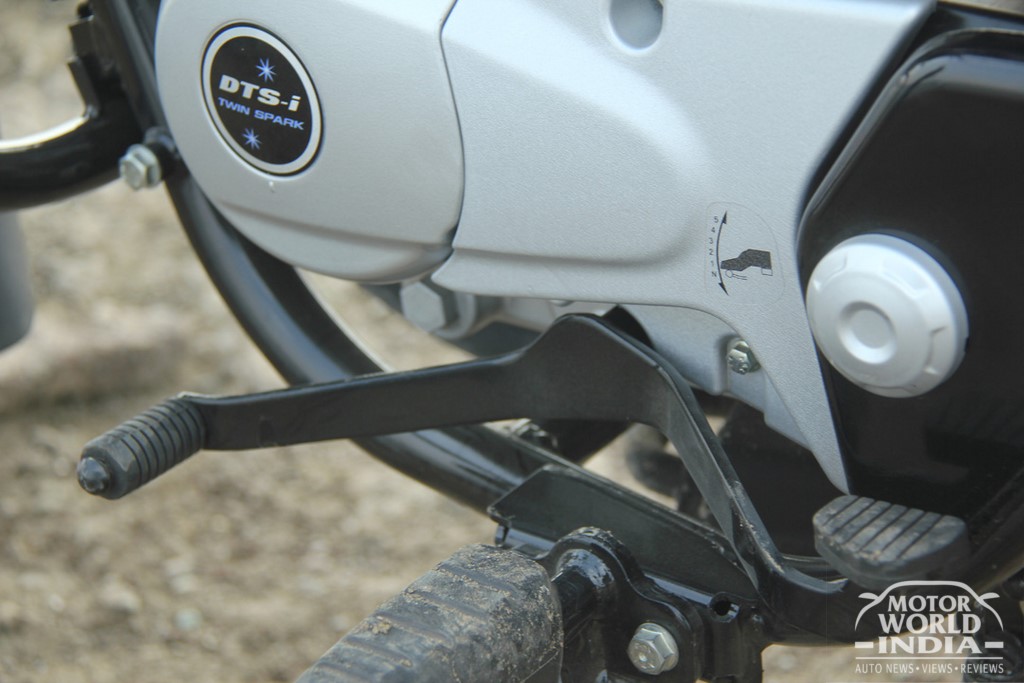 Although the V12 is fueled by a CV Carburetor, the power delivery is smooth and linear. It never feels out of breath. Bajaj, keeping the commuter class in mind, has modified it 1-down-4-up gearbox to All-Up gearbox, which goes with most of the commuter class buyers. Though the gearbox is not as slick as its Japanese counterpart, the Honda Shine, it surely performs smoothly and ensures smooth gear shifting. We got an approximate mileage of 48 kmpl when checked with 1 litre of fuel in tank, riding within the Pune city and NH4. It is claimed that special attention was paid in getting a throaty exhaust note, though we didn’t find it anything exceptional, anyways the rider does not really hear the exhaust note. When we checked with the team riding with us, they said it was a bit different, though not really exceptional. 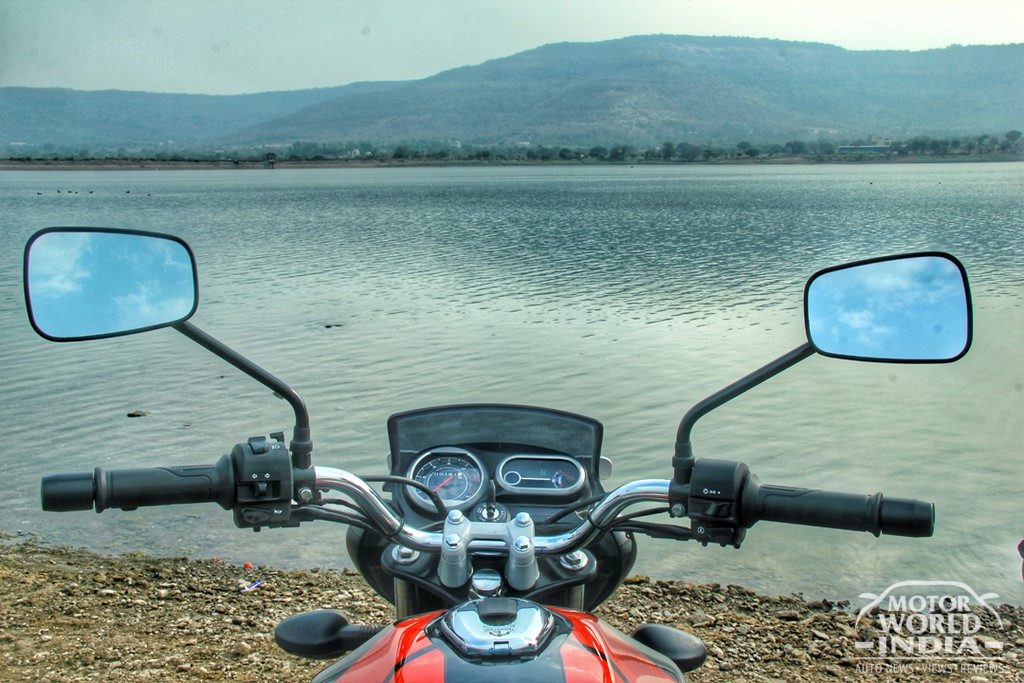 The engine feels very refined and performs without any stress till it crosses 80 kmph. Top end turned out to be 105 when we took her for a spin on the NH4, it surely took us atleast a kilometre to add that extra speed of 25, and the engine was screaming. Also, the vibration that used to set in after crossing 65-70 kmph in the V15 has been rectified, why V15 here, because the V15 and the V12 share the same design chassis. So? How does it affect the engine vibration? More details in the next section. 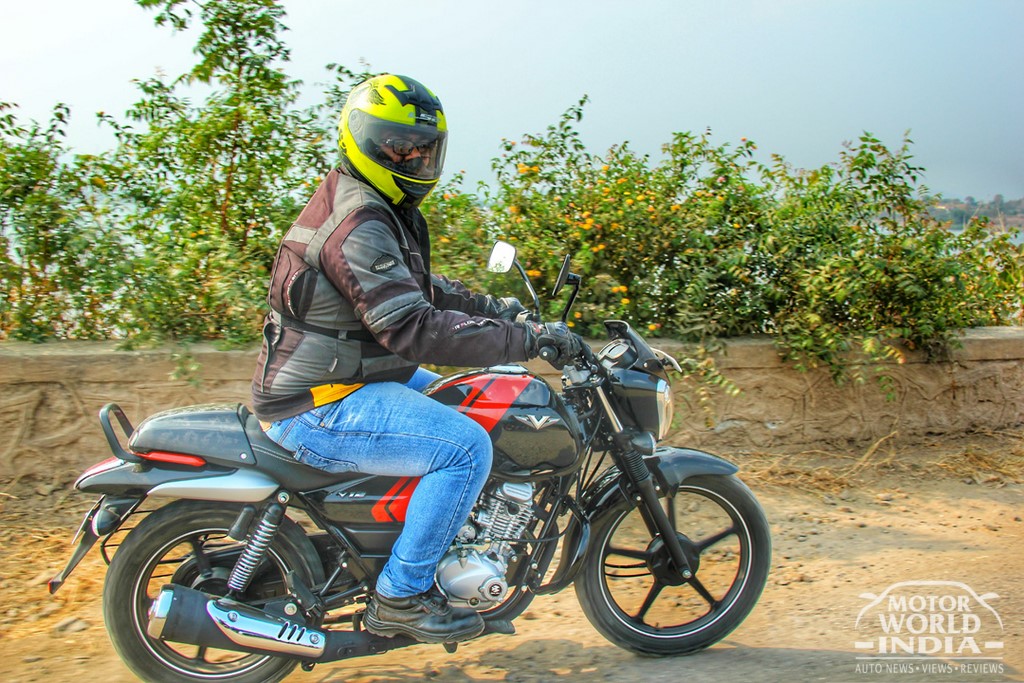 Where could they improve? Well, Bajaj surely could have used the multi-valve technology already in use in the Pulsar and Discover series of engines. It would have ensured better breathing and allowed the bike to clock higher rpm, which would have delivered more usable power in the hands of the rider. A V12 with a powerful engine would surely would have made it more of a steal than buy. 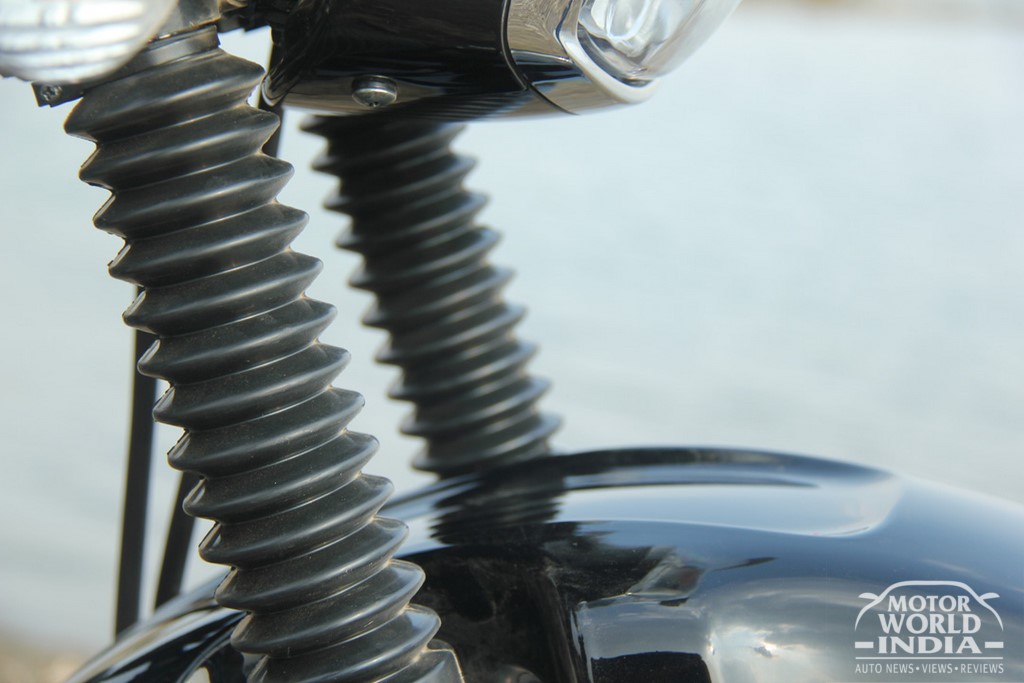 As mentioned above, the Bajaj V12 shares the same double cradle chassis from its elder sibling. The chassis has been improved and redrawn to provide proper engine mounts minimizing the engine vibration and affecting the ride quality. Also, the rear suspension setup of pre-load adjustable twin gas-charged has been borrowed from the elder sibling, V15 for which Bajaj claims to provide one of the best ride qualities in the commuter segment. On the front end, Bajaj has reduced the fork diameter from 33mm in the V15 to 30mm in the V12. The suspensions on both the ends are not very stiff, ensuring you don’t feel those small bumps and potholes in daily travel. The front end provides good feedback and gives the rider confidence to ride in all terrains. We rode the V12 on a remote village road, to test its capabilities for the people in the non-metro areas, from where the mass volume of buyers comes from…and it performed surprisingly well. The suspension took the bumps and craters on the road with ease; also in gravel as well as loose soil, we did not feel the bike moving from its path or feel any stress to control it. The chassis mated with the suspension setup ensures a premium ride quality to the rider, as well as the pillion. We feel the setup to be apt and performing effectively on the V12. 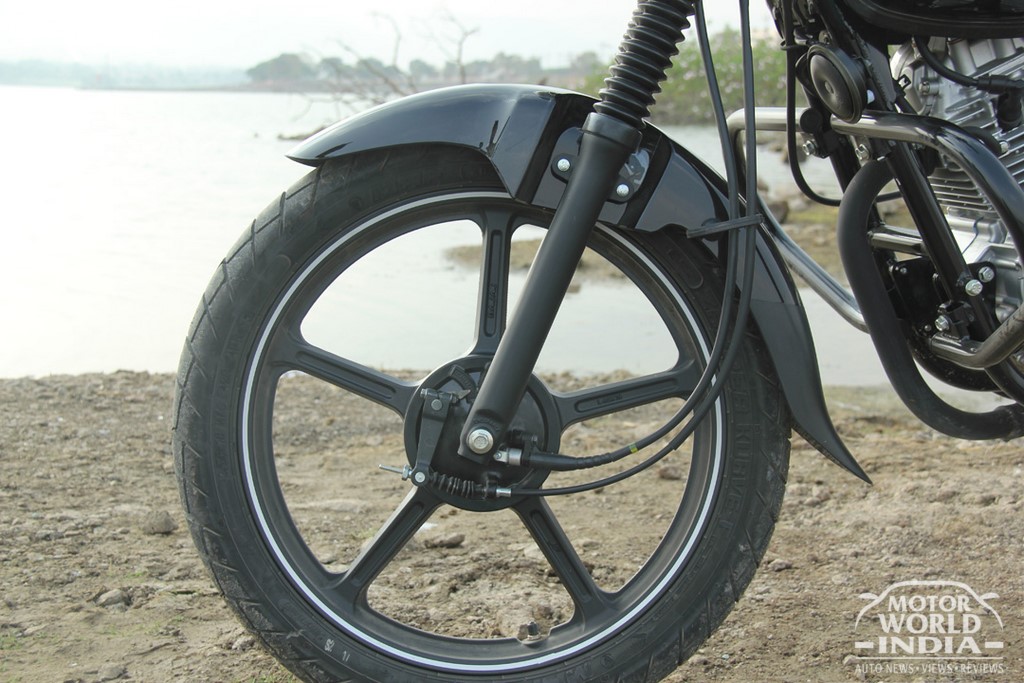 As we said, the ride quality offered by the Bajaj V12 is exceptional and best in its segment. Brakes and the tyres work equally as much as the suspension and chassis in ensuring it. The V12 comes equipped with MRF Zapper Kurve tyre which has a dimension of 2.75×18, likewise, on the rear too is a MRF Kurve with the dimensions being 100/90 x18. They perform effectively on tarmac as well as loose soil and gravel and provide good response, ensuring effective braking, getting the motorcycle a brownie point there. The V12 comes equipped with magwheels only and there is no option of a spoke-wheel model being launched at this moment. The rear wheel gets a drum-type break setup, which provides good feedback in urgent braking conditions too. Ok, we too, were surprised at this, but Bajaj has installed a drum-type setup on the front end too, though it performs well and effectively, we feel they could have used a disc-brake setup on the front end at-least. 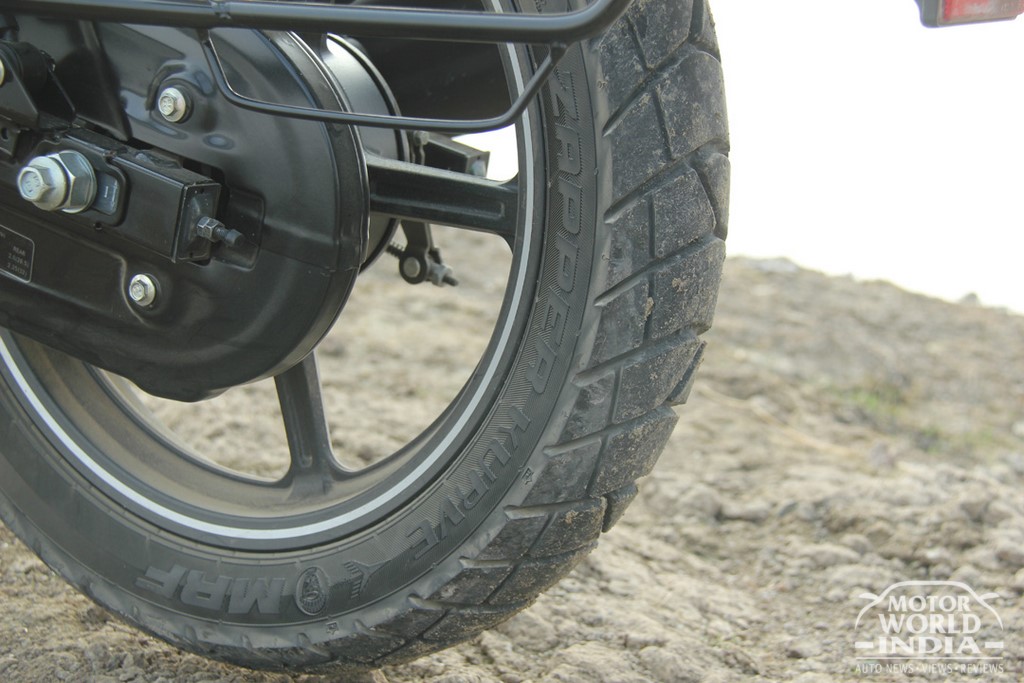 What we feel is that the braking setup is efficient and effective enough for daily commute, but a disc brake assembly could have been added in the offering, making it a complete package. Also, this might make people consider before buying the bike, for competitors like Honda Shine and others come equipped with the disc setup. Also, a basic model with spoke wheels could have been launched, allowing them to cater to another segment of customers who want to save money, since Bajaj is anyways using tubed tyres on the V12. We also feel that a Tubeless tyres and a disc brake setup on the V12 would surely take it to the doors of the upper class of the executive commuter segment, who don’t want to keep changing drum brakes regularly, or get late due to a puncture. Sounds logical… what say? Another interesting fact, we hope you know about Central Government’s decision to make ABS mandatory on 125 and above CC bikes from 2018, so basically we would be surely seeing an updated V12 by year end with a disc brake and ABS setup. 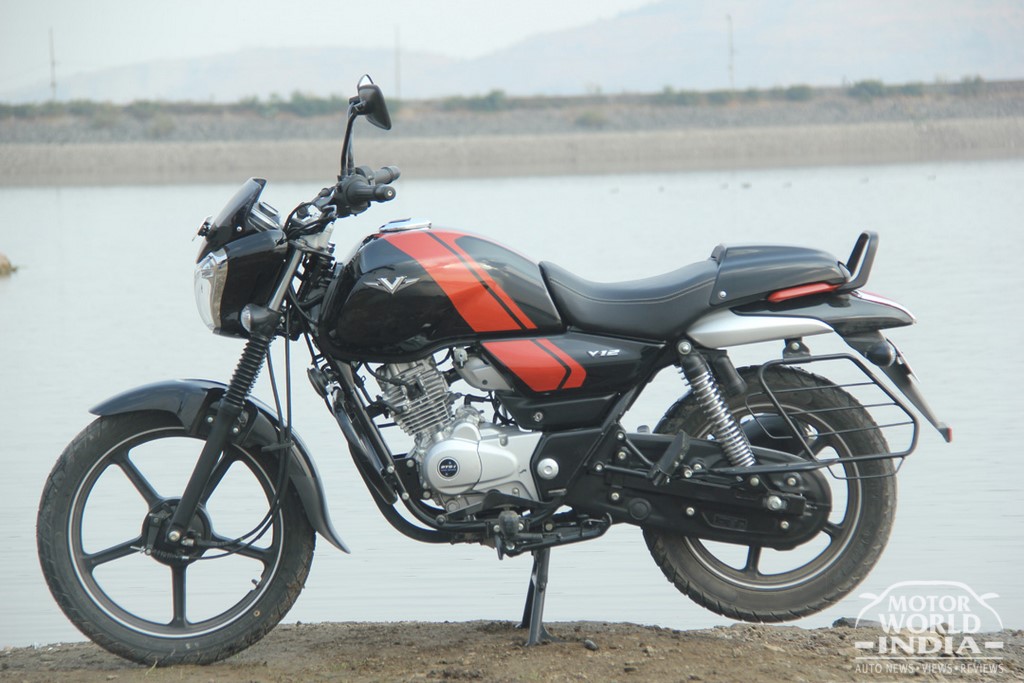 The Bajaj V12 has a wheelbase of 1315mm, same as its elder sibling. Though the overall length of the bike has been reduced and now is 2040mm, which was 2044 in V15’s case. Also, the height has been reduced by 4mm and now the saddle stands at 1060mm, allowing people even with average height of 5feet 3inches to easily enter the saddle and touch their feet below. We actually tested it with one of our team mates, who is also our photographer for the review. The width of the bike is kept unchanged at 780mm, as well as the ground clearance which is 165mm. The kerb weight of the bike is 133kg, which makes it very easy for the rider to control and change directions even in tight traffic situations. The overall package definitely feels sturdy and strong, adding to the confidence level of the rider. It is ‘AGILE’, yes, that’s the word. The V12, even with a longer wheel base, is agile and very easy to handle. Also, the bike performs surprisingly well even when exposed to corners. The tyres provide good grip on corners too, and the bike’s design gives the rider a good amount of confidence to bank on a corner. The fuel tank has a capacity of 13 litres, which gives the V12 a range of atleast 600+ kms on a full tank before entering the petrol bunk. 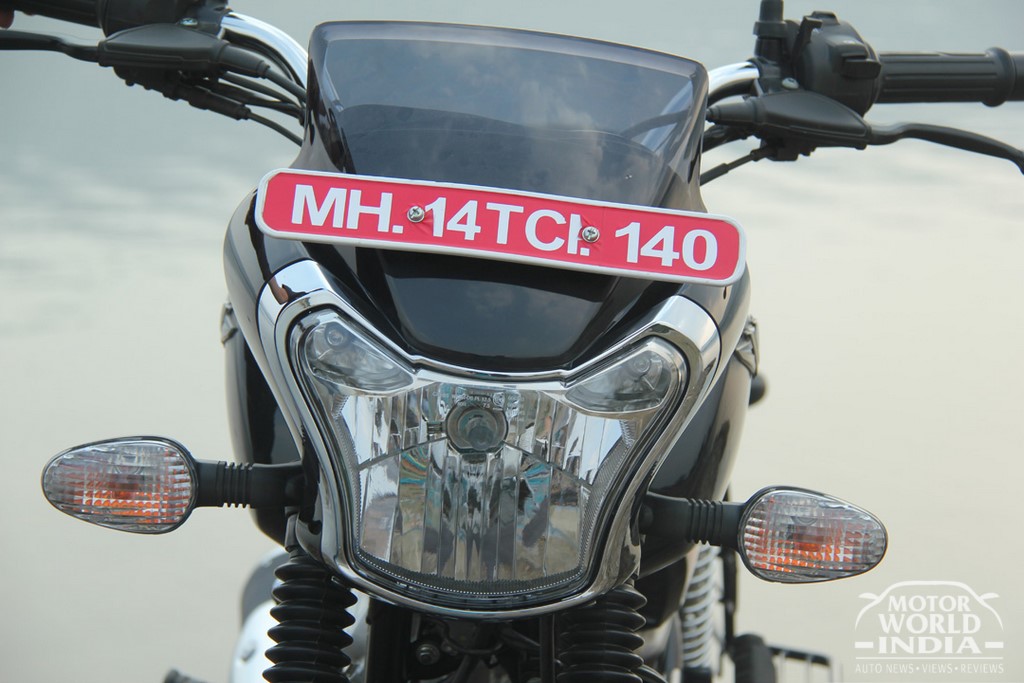 The Bajaj V12 surely looks like a premium package offering, if we don’t consider the disc-brake part. The first thing you would notice that is different in V12, is the colour scheme. Colour schemes specific to V12 have been launched, which would graphically differentiate the siblings. The quality of the paint feels premium and special care has been taken to providing finishing on the edges, adding to the premium feel. The V12 shares the headlight assembly and tail-light assembly from the V15, which it seems would be the signature design in all V-series bikes. Although, the headlight assembly is same, Bajaj has used a 35/35 watt bulb unlike the 55/60 watt bulb on the V15. The switches are of good quality and perform well and smooth, adding to the feel of the bike. Like the V15, the V12 also misses on the Engine kill switch. 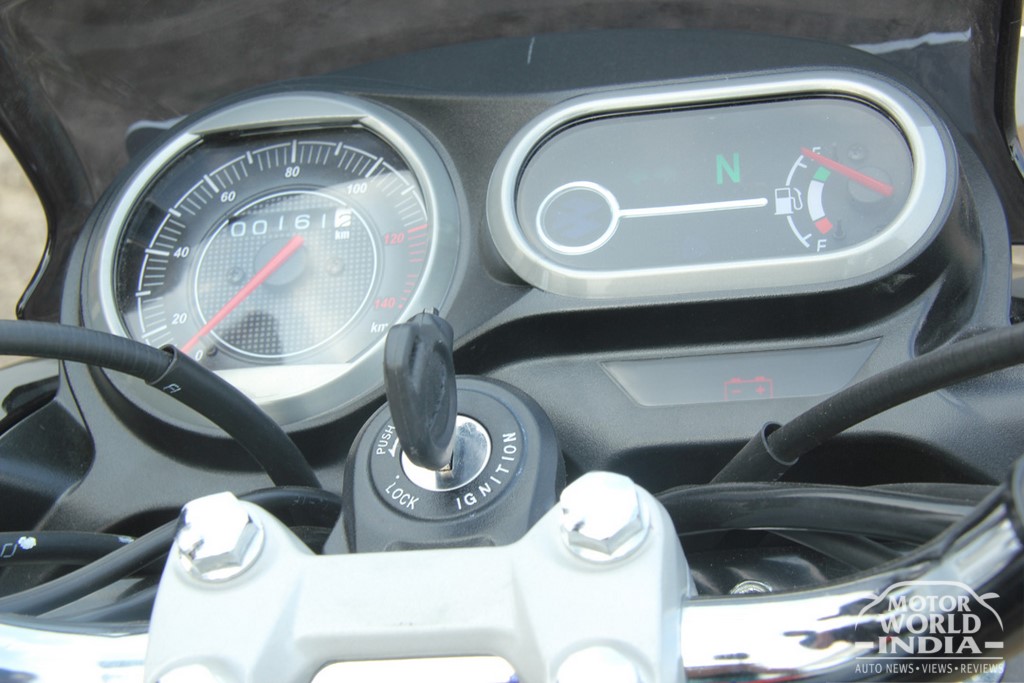 The instrument cluster on the V12 is very basic and houses a analogue fuel gauge and an analogue speedometer with an odometer at the centre. Signal light indicator, High beam indicator and the Bajaj Logo is also displayed in the meter console. We find it to be very basic though; Bajaj surely could have added features to the meter console and made it more informative. A clock and trip meter is the least that one could expect. What we mean is that even a TVS Victor 110cc bike comes with a digital meter console providing information like Trip meter A & B, Servicing due indicator, battery indicator and a digital speedometer. 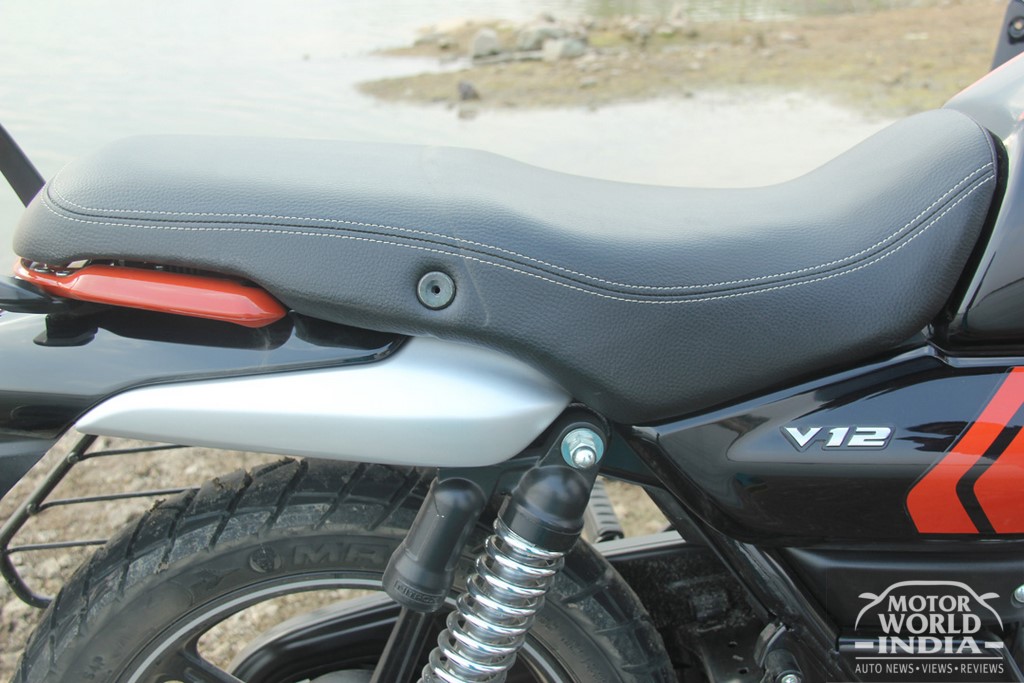 The seats on the V12 are the same as on V15 and are very comfortable for the rider as well as pillion. We rode the bike for a stretch of 100 kms and we were never uncomfortable with complaining bums. With wide seats and comfortable upright riding posture, surely the rider has nothing to complain about the ride quality. The fuel tank is what adds the magic touch to the package. The fuel tank assembly has been manufactured using the scrap metal from the INS Vikrant Air-craft carrier, a name the whole of India takes with pride and honour. The fuel tank cap has a logo of the INS Vikrant neatly painted over it, adding to the premium feel and awakening the feeling of patriotism in you. 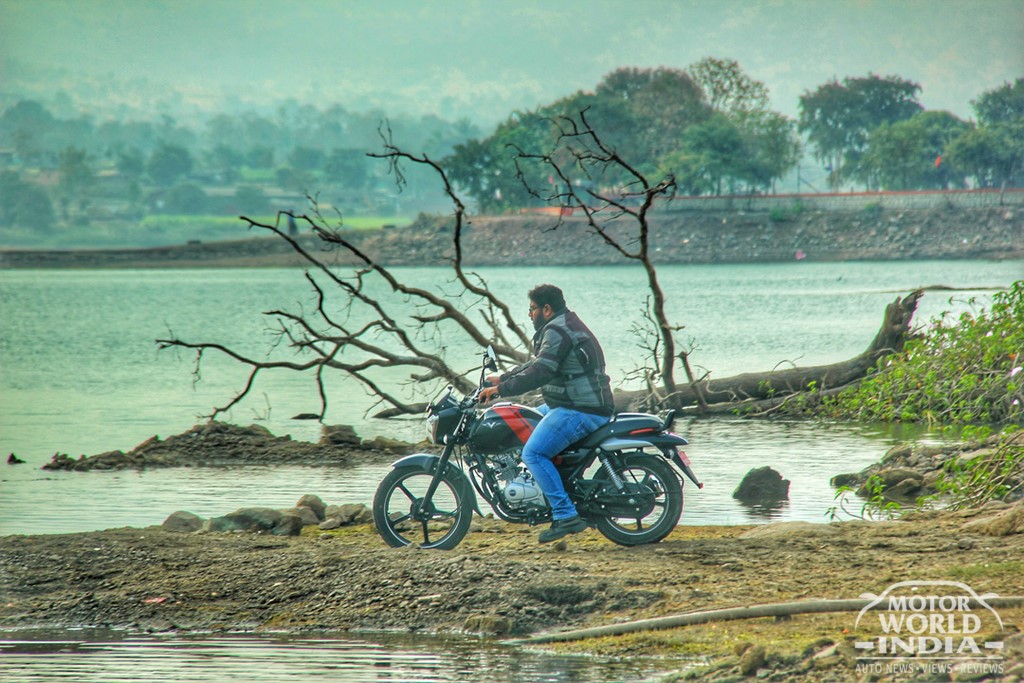 The Bajaj V12 is surely a package deal with a price tag of Rs. 56,283/- (ex-Delhi) offering the V15’s comfort and ride quality as a preposition to the 125cc buyer. It’s unique design and the long stroke engine mated to a balanced chassis and good tyres surely make it a steal deal, keeping aside the missing Disc brake. Also, the V12 could be used as a weekend ride buddy. It is stable, refined, agile and can do speeds up to 80 kmph with comfort. 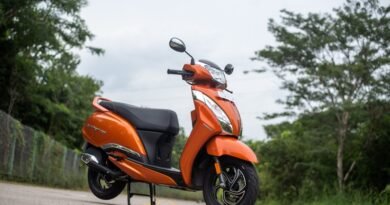 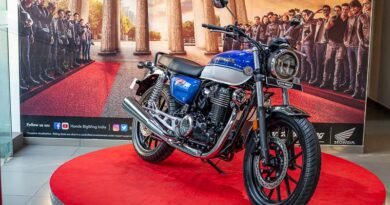 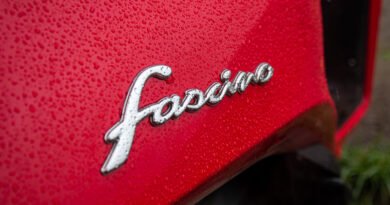