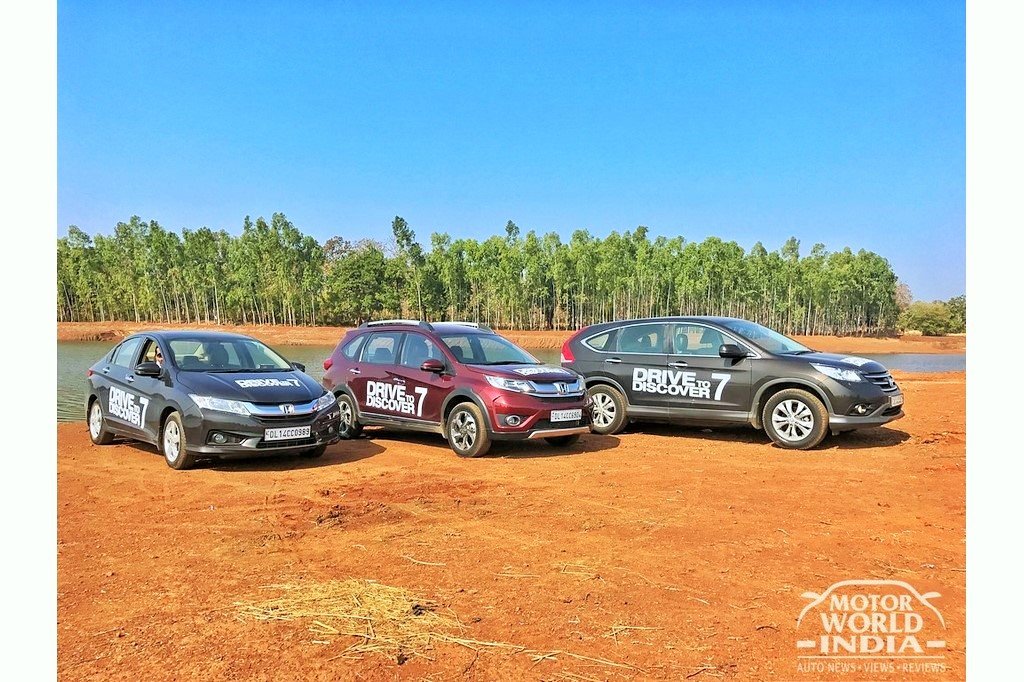 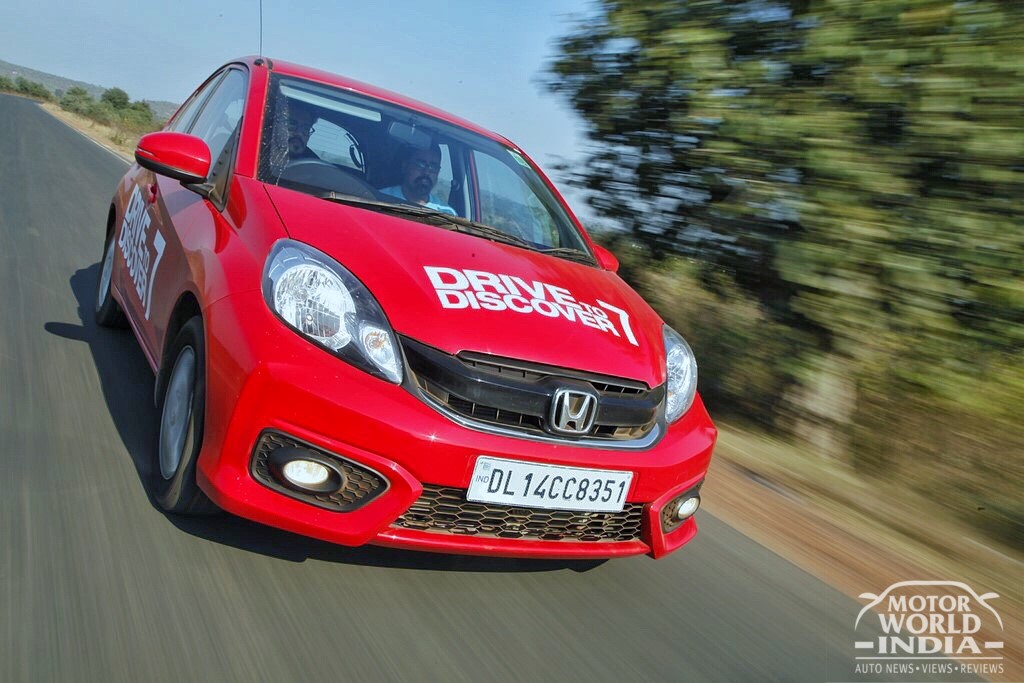 We auto journalists keep on doing media drives all the time; it’s a part of our work regime. These are the drives that we do with a new car for our reviews and roadtests. There are those drives…and then there is the Honda Drive to Discover that happens every year. Now Drive to Discover or D2D as it is known as, is a very unique drive activity organized every year by Honda where a handful of journalists drive Honda cars to some uncharted locations without any preset route. This year was the 7th edition of this unique and daringly different drive. The start point for this year’s D2D7 was Nagpur in Maharashtra and the end point was Khajuraho in Madhya Pradesh. As we got the invite for this year’s D2D, excitement crept in and we instantly remembered the earlier D2D drives and of all the fun we’d had on them. 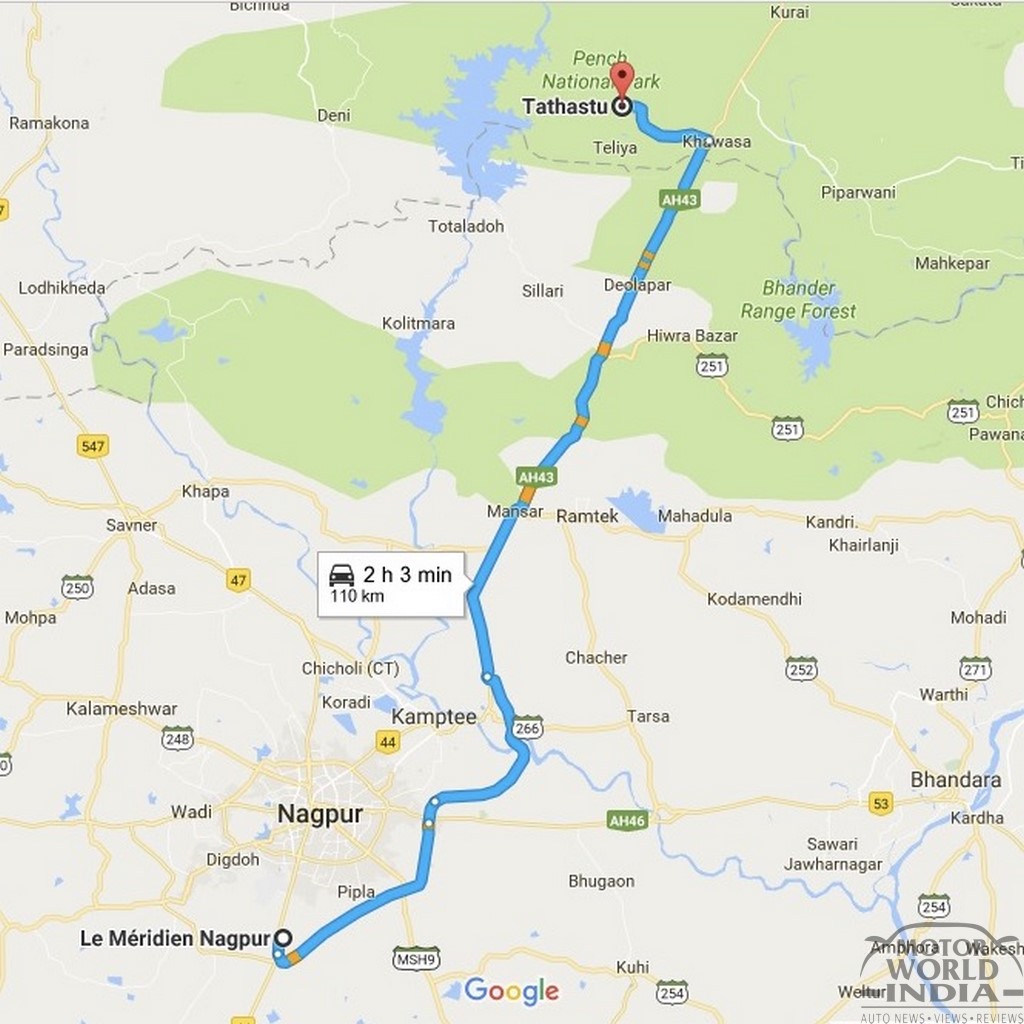 On a cold winter noon, we landed into the City of Oranges – Nagpur to begin this year’s D2D. The drive was to begin the next morning so we stayed in Nagpur overnight. Nagpur is the winter capital of Maharashtra and a city known for its Orange produce and recently for the Farsan (Indian dry snacks) giant, Haldirams. It also happens to be the place where the Winter Session of the State assembly is held. After a good night’s sleep we were all set to begin the drive. This year Honda had all the car models from its lineup for the D2D, which included the Brio, Amaze, BR-V, City, CR-V and also the Accord Hybrid. As we finished our breakfast we were assigned a car with two journos to one car. Our car for this first leg was the Honda Jazz. A quick group photo and flag-off…after which we hit the roads heading towards the Pench Tiger Reserve. 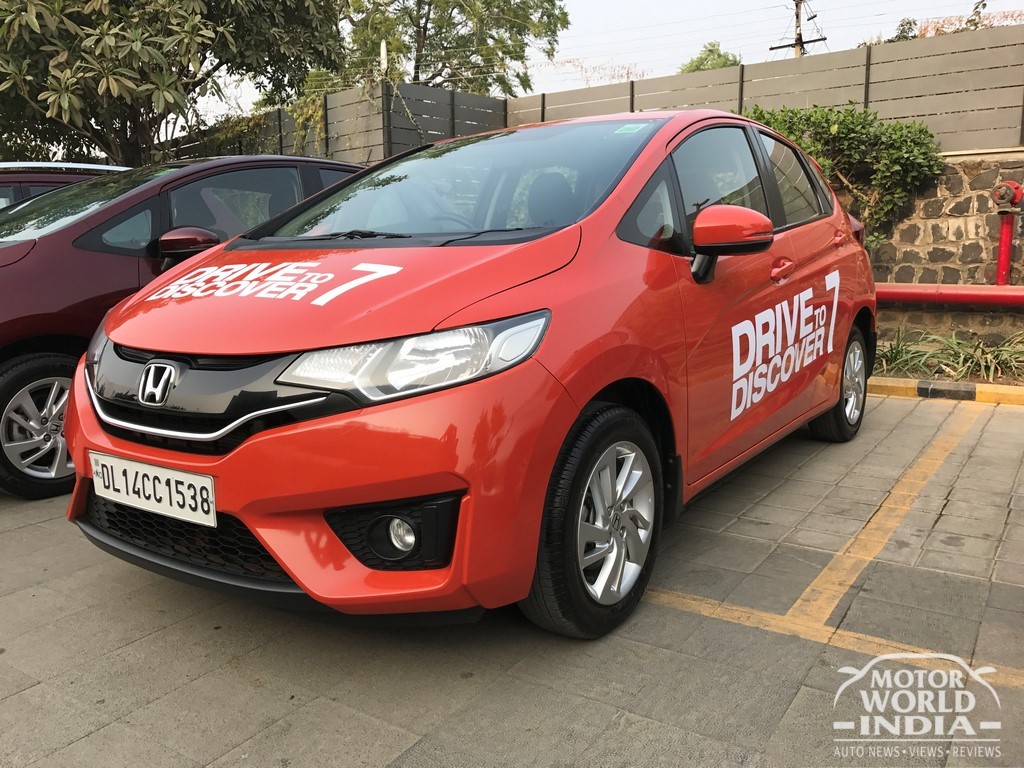 The total distance being around 110Kms (shortest leg of the drive) crossing into Madhya Pradesh. The Oriental Nagpur Bypass is one of the roads on this stretch which was excellent to being with, the others being mostly toll roads that are very well laid out. Just as you enter the forest zone there are a few diversions due to new flyovers being built on some patches. We are told these flyovers are specially being built in the patches where the roads pass through forests, so that the wildlife there can move freely without having to cross the roads. The Petrol manual Jazz that we drove on this stretch did its job rather well, making the drive very pleasurable. 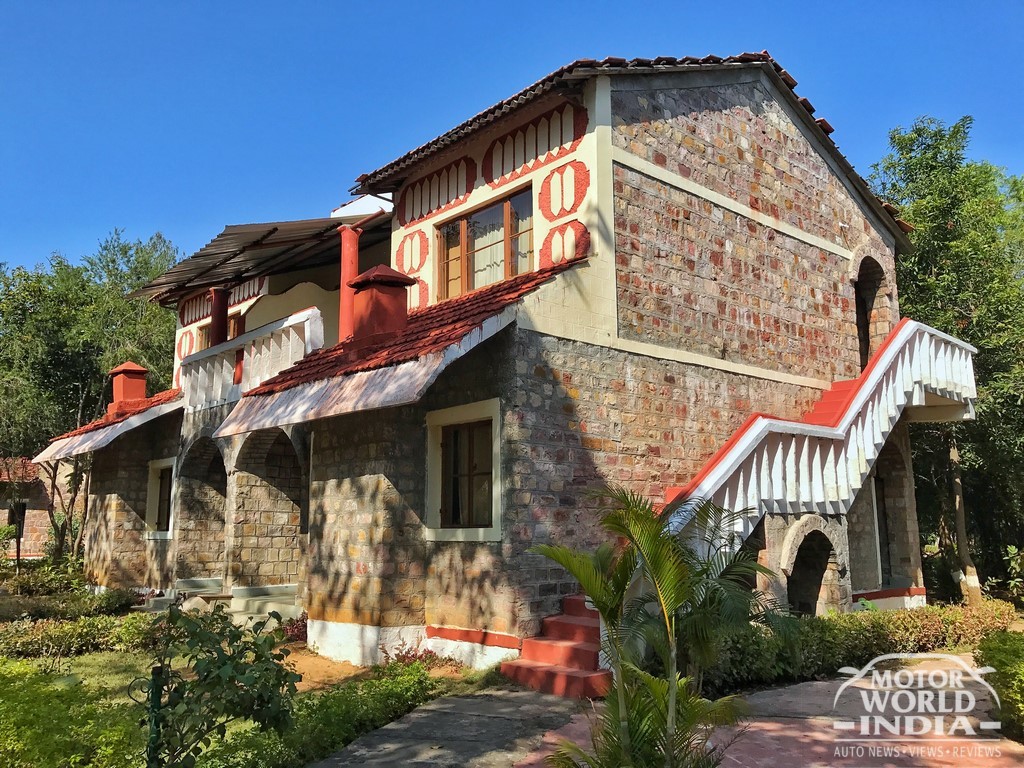 Once we entered the forest area, we took a left to reach Awarghani Village bang inside the Forest where we were to stay at the Tathastu Resort overnight. Now this is a luxury resort which is very near the main forest gates, which is where you enter the forests for the Tiger Safari that was planned for later in the noon. At Tathastu, Luxurious Villas is where we stayed which had all the amenities for our comfort. After lunch, we were all set for the Tiger Safari. We had open top Gypsys for this with a guide along with a driver. Our entry for the safari was from the Turia gate. 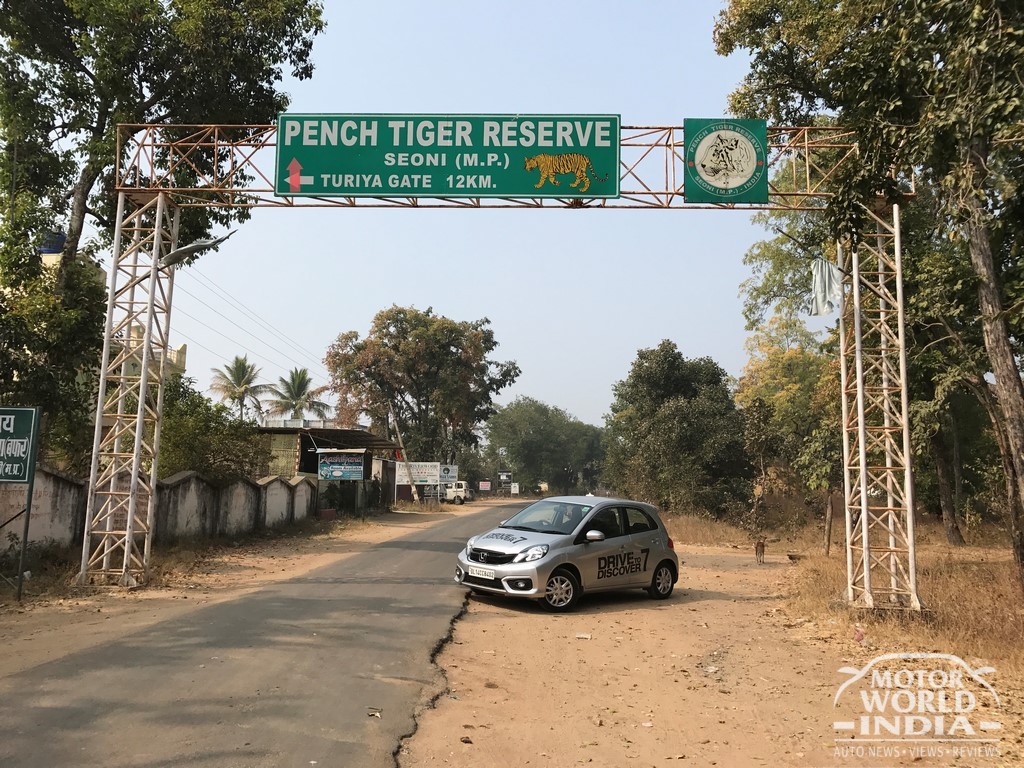 Pench National Park, also known as the Pench Tiger Reserve, gets its name from the Pench River that flows through the forest. This forest has around 40 tigers and the commonly seen wildlife is the chital, sambar, nilgai, wild pig, and jackal. Also Indian leopard, sloth bear, Indian wolf, wild dog, porcupine, monkey, jungle cat, fox, striped hyena, gaur, four-horned antelope and barking deer live in the park. But we were here for tiger spotting and our eyes were searching for the big cat. As the safari started the silence of the jungle struck us and the guide began to explain the different calls that are given out by monkeys, elephants, deer and birds when they spot the tigers and this is how the guides make out the exact area where the tiger is passing from. 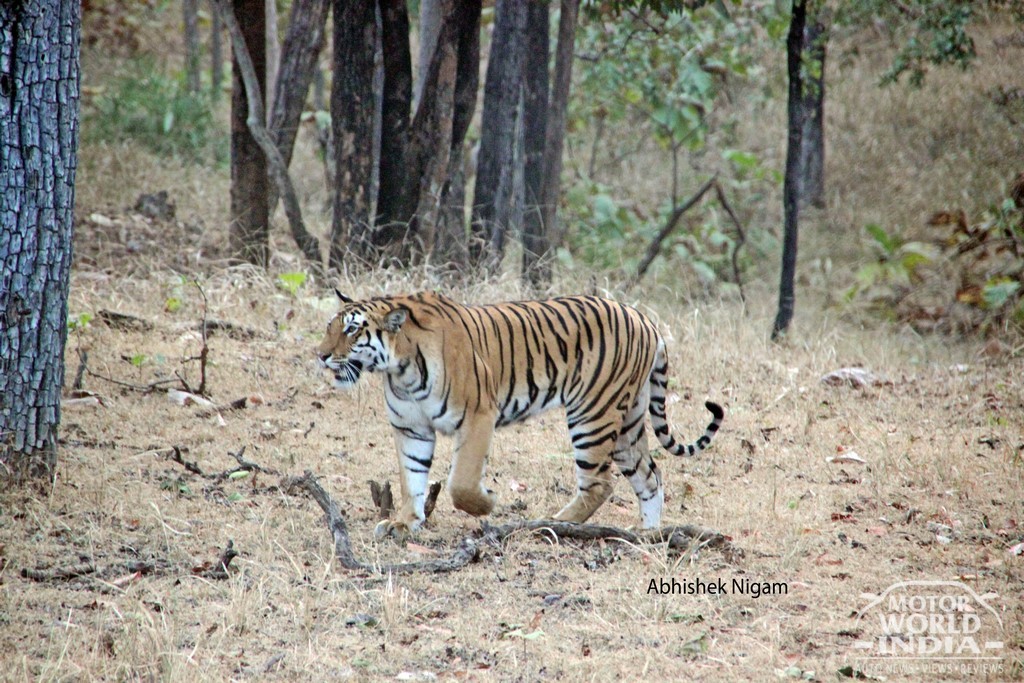 Shortly, we did spot tiger nail marks on a tree, after which we spotted a tigress! The tigress did not care what was happening around her…fearless and confident, she moved around and then sat on the safari track, as though telling us that this is her territory and reminding us that we were trespassing her domain. It was pin drop silence as the only noise that was made was of the camera shutters and mobile clicks that took endless images of the big cat. We moved on as the tigress went inside the dense forest and then we saw a few deer, lots of monkeys and sambars too. As the evening drew closer, we were told by the guide that the safari jeeps need to leave the forest before 6pm. We were out by 5.45pm and headed back to the resort for a quick shower followed by a camp fire dinner. As the night closed upon us the temperature dipped, it was getting cooler by the hour. We could hear the sounds of the forest in the resort as we ended this big day when we had spotted the Tigress of Pench. 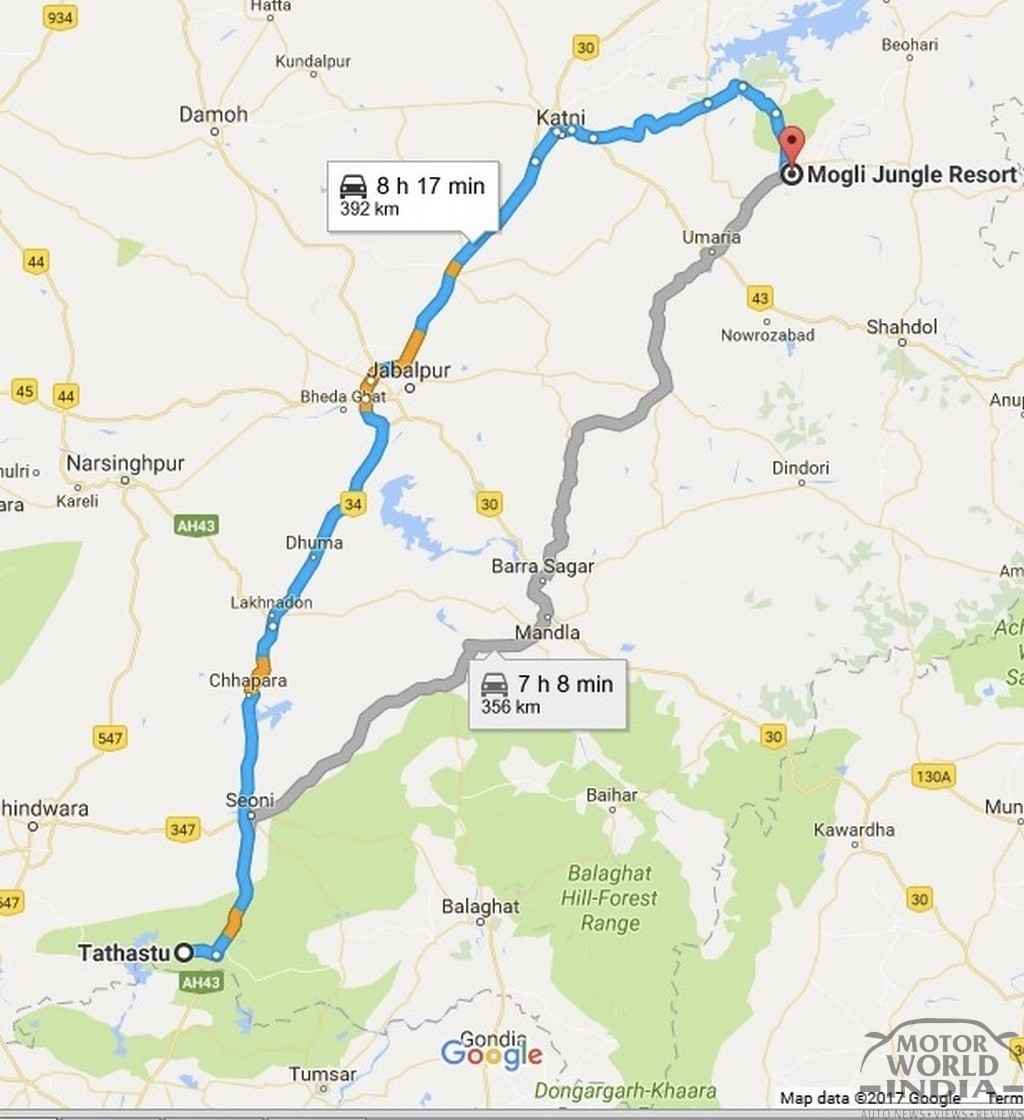 This was going to be the longest leg of the entire drive and we had to leave early to reach the resort at Bandhavgarh before it got dark. To do so, we decided to skip lunch which was planned at Kanha as that would save us a lot of time. We left from our resort at Pench to head towards Bandhavgarh, and our drive for this leg was the Diesel BR-V. This time we were three journos in the car. The roads towards Bandhavgarh on this leg were the most scenic and passed through many small villages and a lot of forest areas. We drove at a steady pace as there was not much traffic except for the few occasional trucks that we passed by. This was not only the longest, but also the best leg of the drive. We encountered all kinds of roads, rough patches, bypasses, single lane roads, crossed bridges and a lot of cattle too. 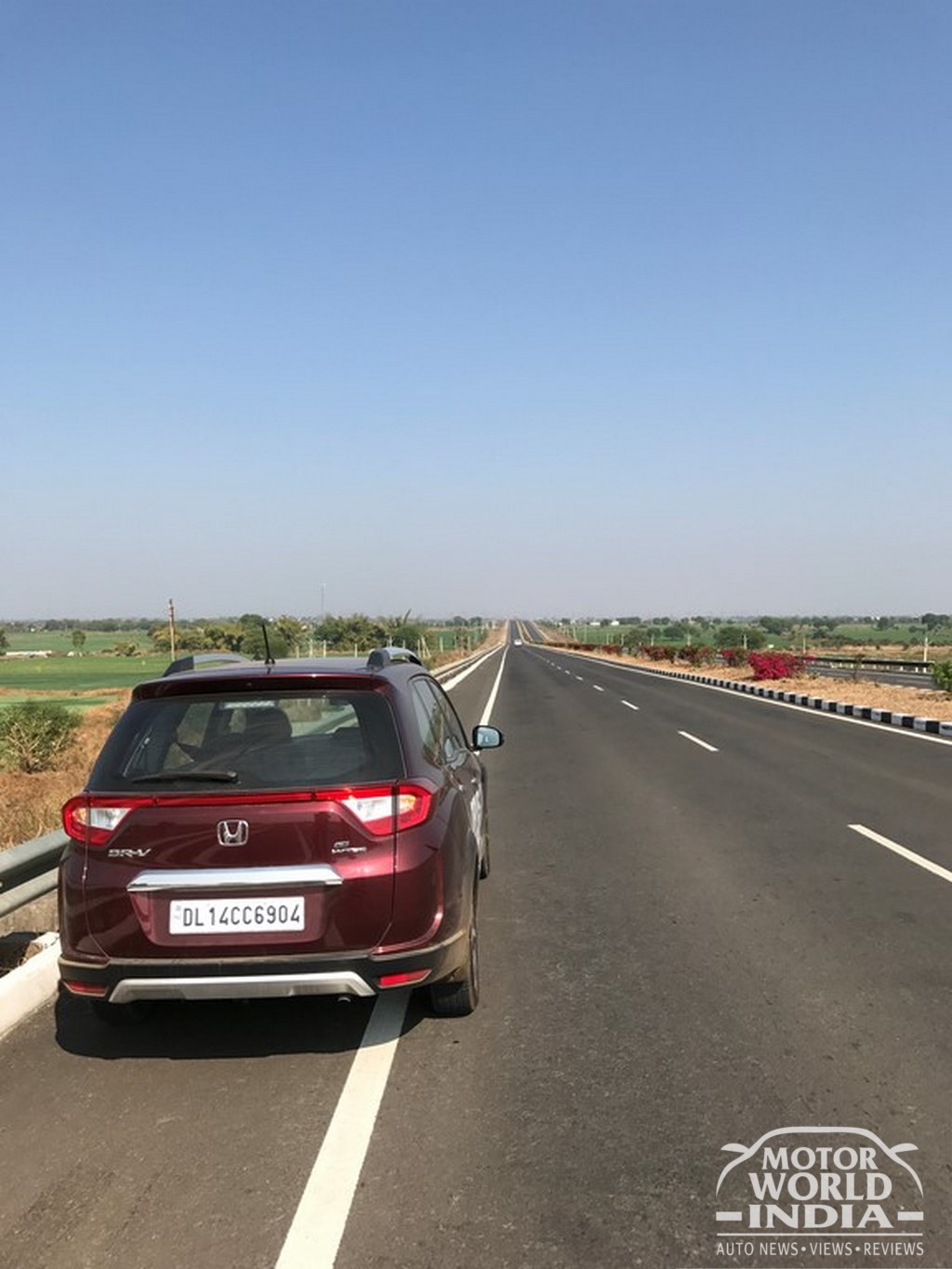 Our Honda BR-V was eating the miles joyfully as our mobiles were going from no network zones to full network coverage areas. With music playing in the BR-V we were busy enjoying the rich, raw countryside drive. It was nearly 2pm when we decided to stop for some time off. We decided to make a small tea stall as our docking zone. Our car was stacked with some biscuits, juice, farsan etc and that helped us to skip the lunch and detour to Kanha. Had some nice hot and strong tea (Chai) at this shanty stall which was owned by a guy called Saddam. Vikram who was driving with me in the BR-V decided to add some chopped onions to the Sev farsan and make his own lunch. So tea with onion Sev was on our menu at lunch. 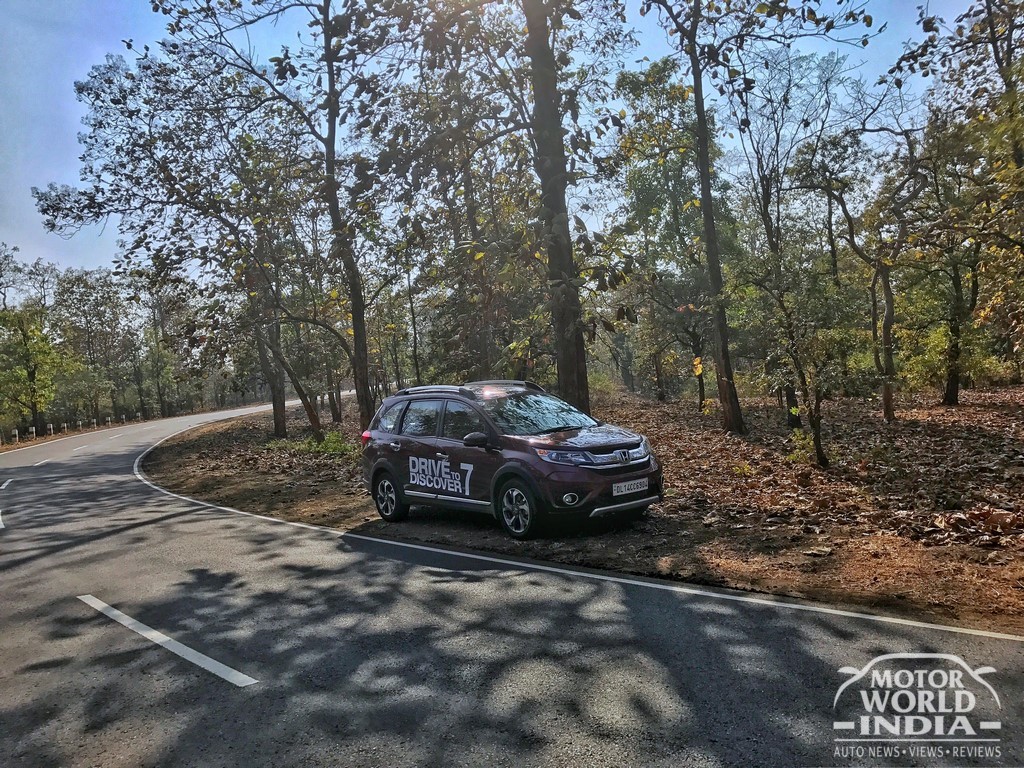 After enjoying our time out, we hit the roads and on this stretch encountered a lot of ghat (hill climb) sections. The entire stretch was extremely scenic and the temperature was dipping quickly. We had our second tea break at 5.30pm, this time in a small village at a tea stall just next to a train crossing. It was evening when we saw the first sign boards towards Bandhavgarh. We were entering dense forest area close to sunset time. We had our car heaters switched ON as we crossed the forest check posts entering Bandhavgarh. We spotted a few deer and also a jackal after entering the Bandhavgarh forests. The roads were getting slimmer as we headed towards the Mogli Resort, where we were to spend our night. We were the first to reach the resort, thanks mainly because we had skipped our lunch detour to Kanha and saved some valuable time. 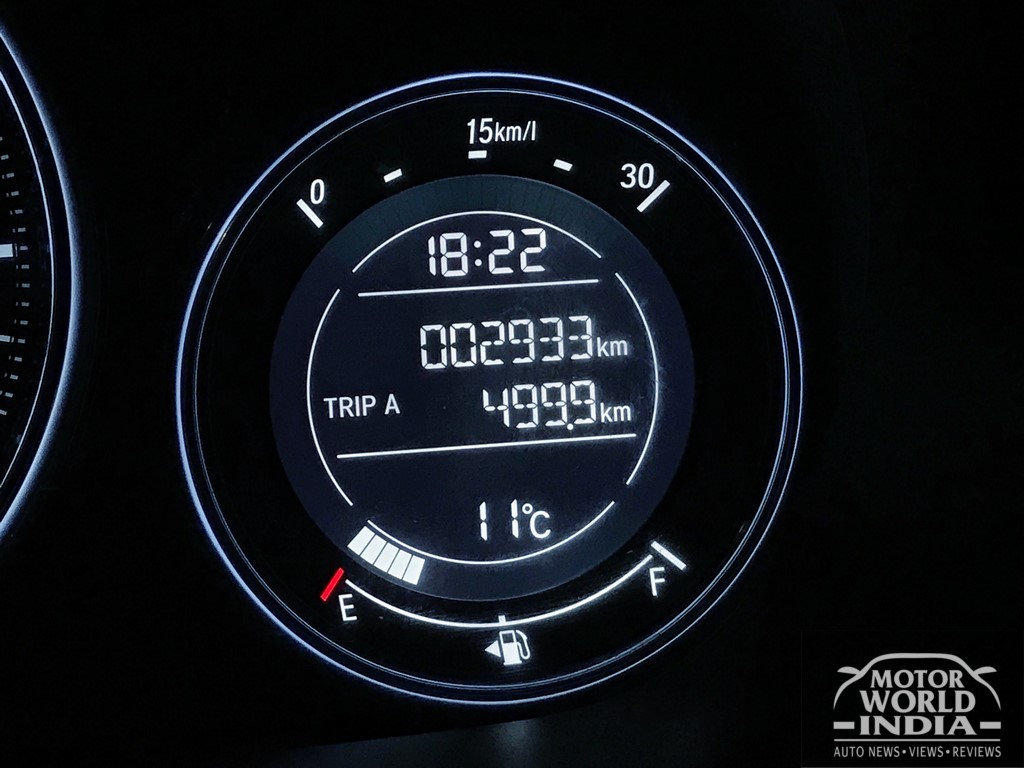 As we alighted at the resort, we were so proud of the BR-V that had played the biggest part in making our 500kms drive on this leg sheer bliss. It was time for the campfire dinner and this time we really stood near the fire as the temperatures were freezingly low. The other cars reached only after 8pm, when we reached at 6.30pm. It was going to be a very early morning next day as the Tiger safari was planned for 5.30am. Woke up to a freezing morning with temperatures as low as 4 degrees. 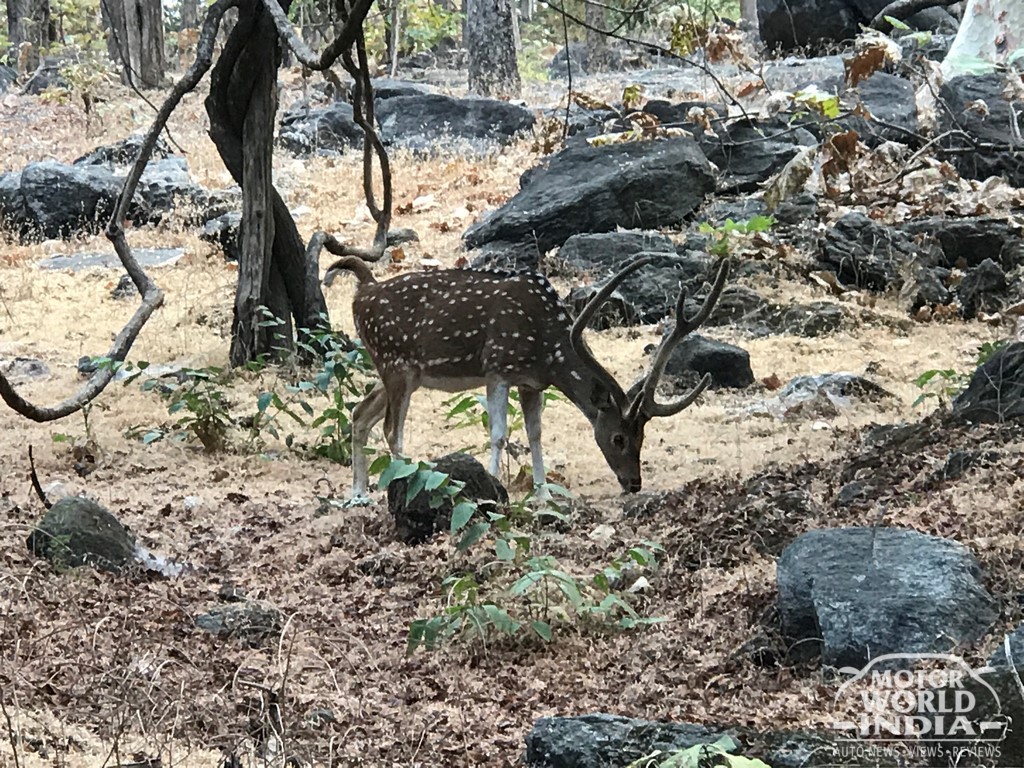 The Safari Gypsys were ready for us and this time we were also given woolen blankets for extra protection from the freezing cold. As we entered the core forest area, we were told by our guide that only 20 percent of the forest is open to the public for safaris and 80 percent has been shut to public due to Supreme Court orders to preserve and safeguard the forests and its animals. As we drove around for 4 hours on this safari we did not spot any tigers, but yes deer, sambars, monkeys, elephants and lots of parrots and other exotic birds were seen here. We were back to the resort by 10.30am ending this safari. 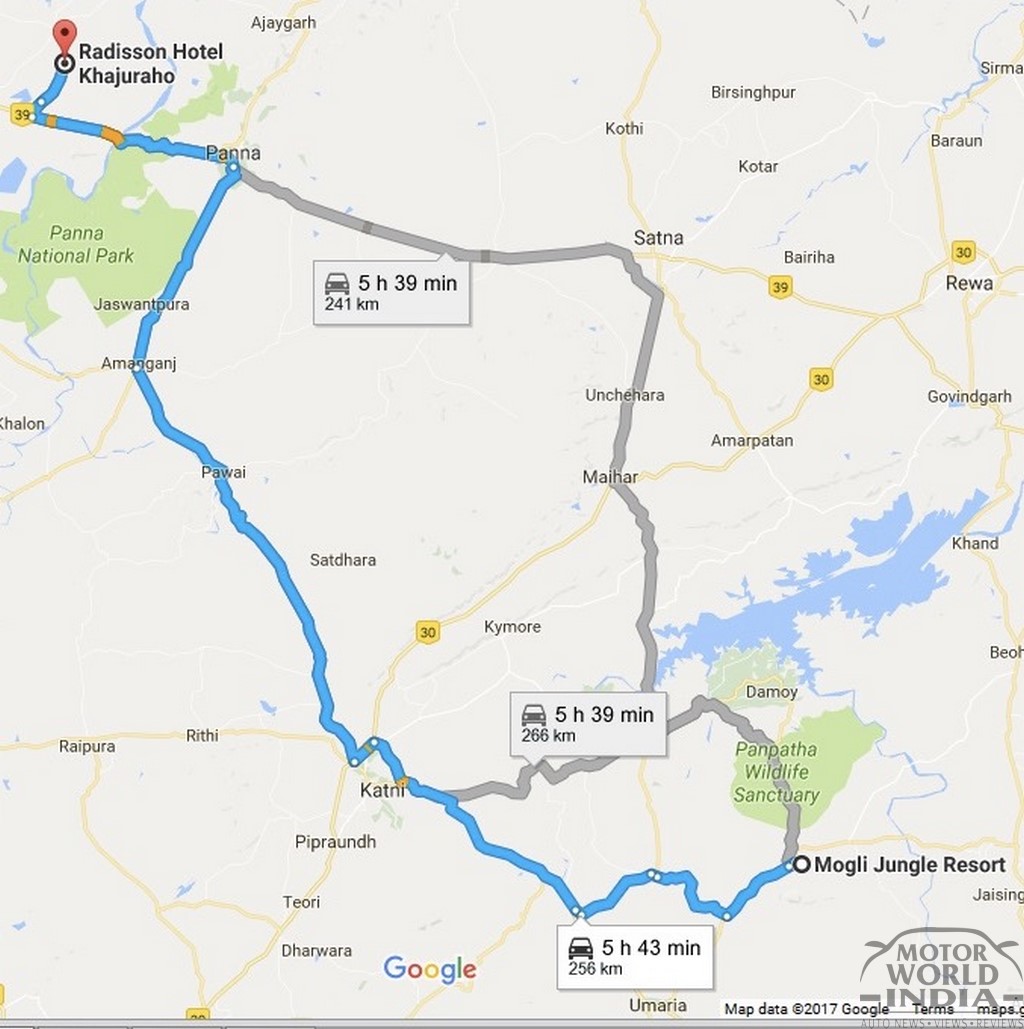 This was going to be the last and final driving leg for the D2D and we had to cover a distance of 254kms to Khajuraho via Katni. The roads on this stretch were a mix of jungle roads and then opening up to small villages and towns. Road conditions were good and we had the Brio Automatic for this final leg. We had to reach Khajuraho before 7.30pm just to be in time for the famous light and sound show that happens there on the temple grounds. As we drove out, we decided to have some fun and did a Mannequin Challenge video shoot in between the forest, the link for which is shared at the end of the story. The Honda Brio automatic does feel extremely fun to drive on these open roads. The torque convertor automatic gearbox helps enhance the comfort levels further. 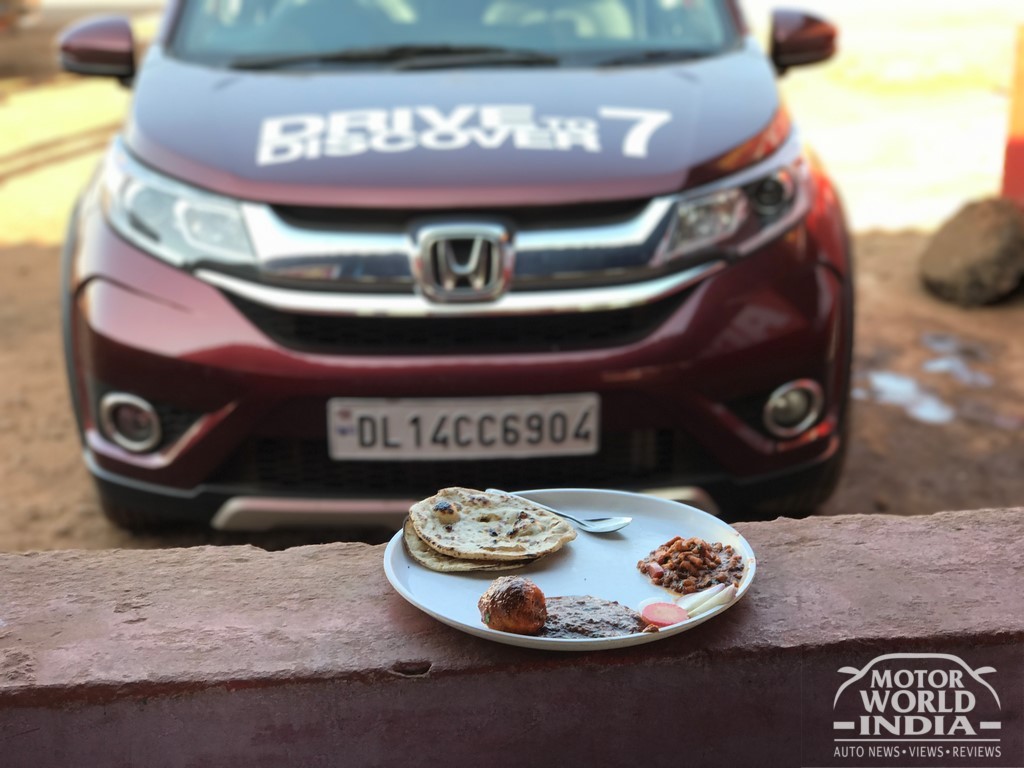 We did the entire distance with a lunch break at a small eatery on the Katni highway called Panchavati Bhojanalay. Though this was a small roadside Dhaba, the food served here was extremely tasty and freshly cooked. We had some Anda Masala (Egg), Sev Tamatar Sabji and some hot rotis to go with it. We got our energy back after this sumptuous lunch and hit the roads. Passing some towns and villages and a small patch of hilly roads we finally entered Khajuraho at 7.20pm, just in time for the sound and light show. Driving directly to the Temple grounds, we were soon seated, listening and seeing the show narrated by none other than Mr. Amitabh Bacchhan. Our last night of the drive, we were put up at Radisson Blu Khajuraho. 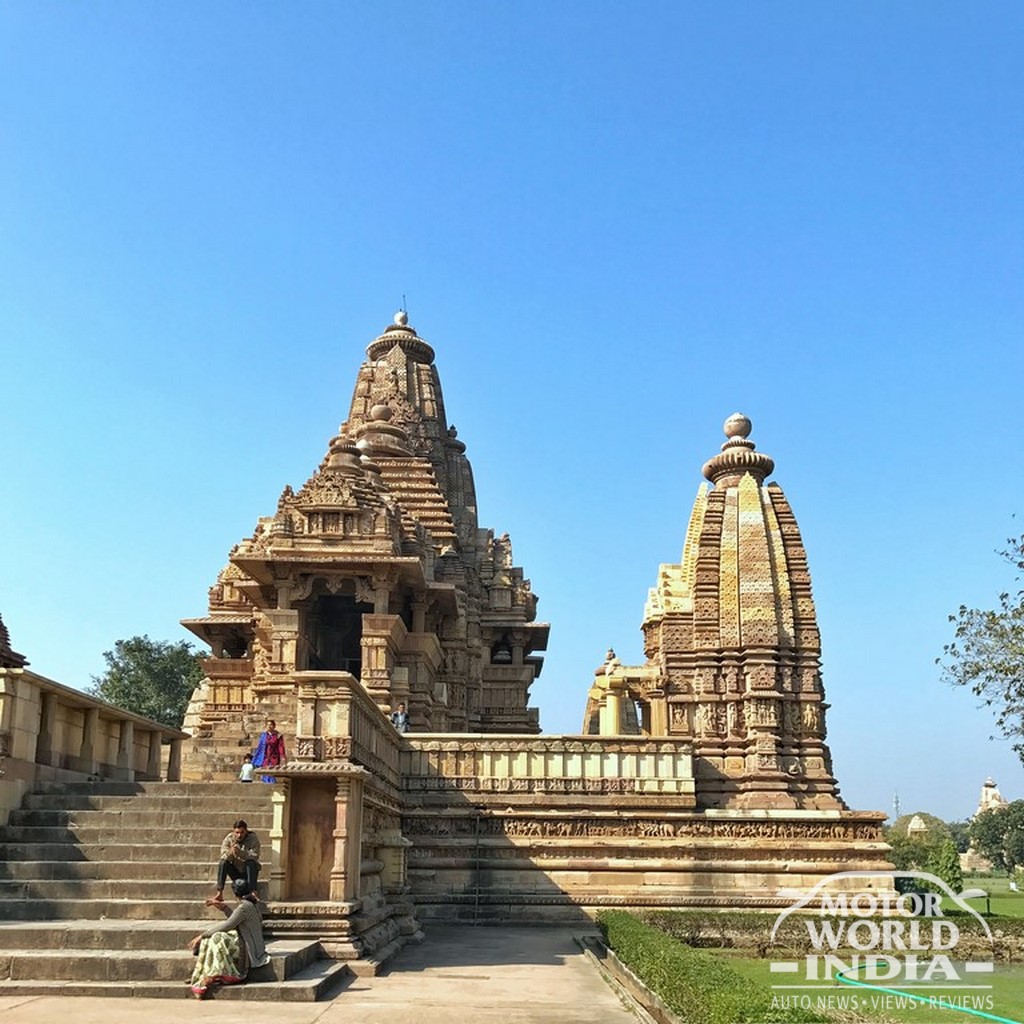 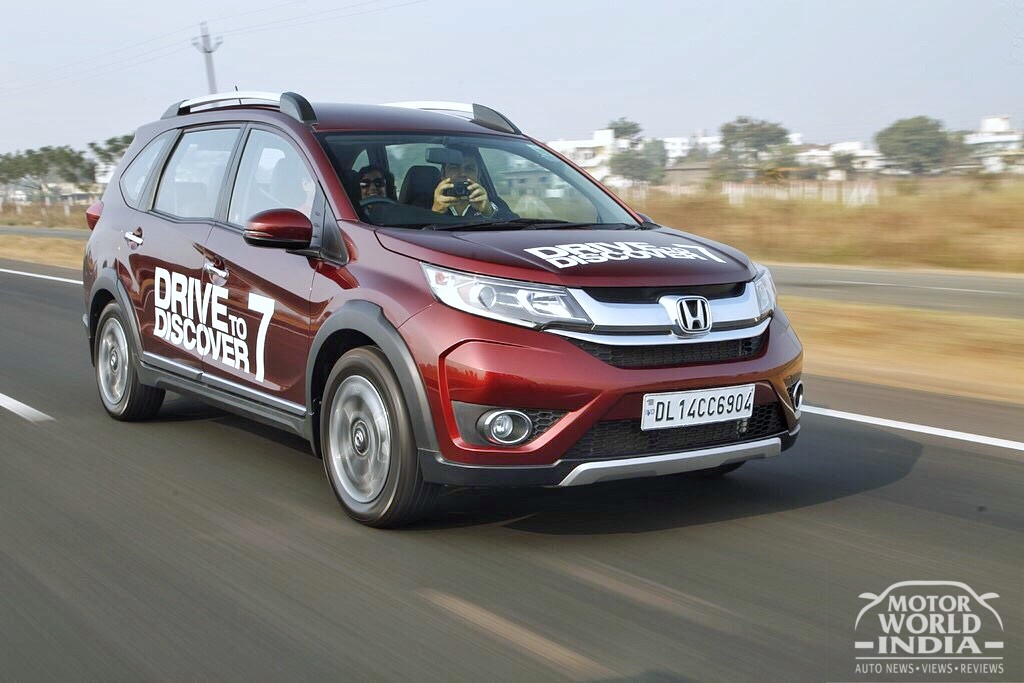 It was soon time to say bye to our friends, few of them who are always with us on the D2D, as we checked in to our flights back home, with memories of this 7th edition of Drive To Discover vowing to remain fresh in our minds for a long time to come. This is one of those unique drives that takes us closer to our roots and shows us a lot many things that we fail to see or don’t get to see in our busy monotonous city lives. Signing off, till we meet again on the 8th Edition of Honda Drive to Discover on another exciting route. Not forgetting that we covered more than 900kms in 3 days of driving the Honda cars, with not a single car encountering any technical problem, which speaks volumes about their technical and engineering capabilities. 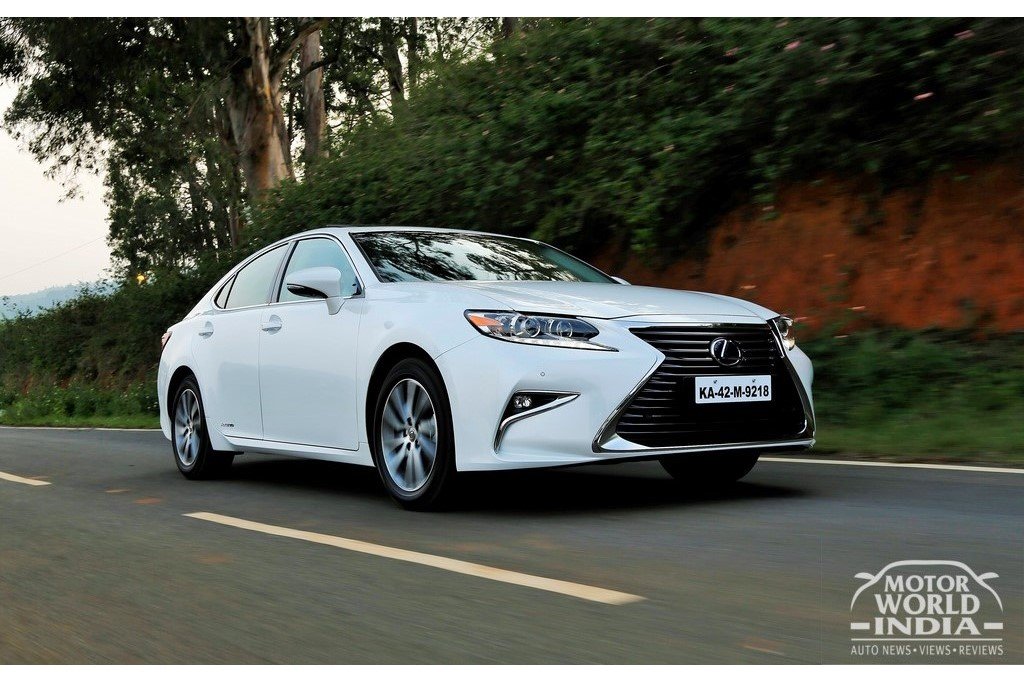 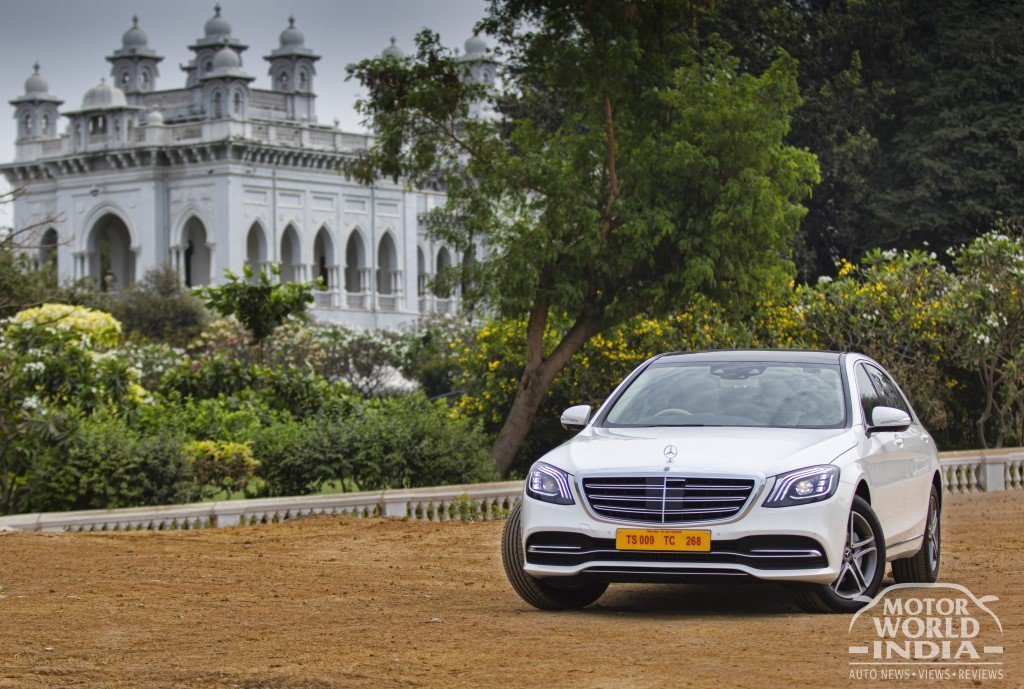