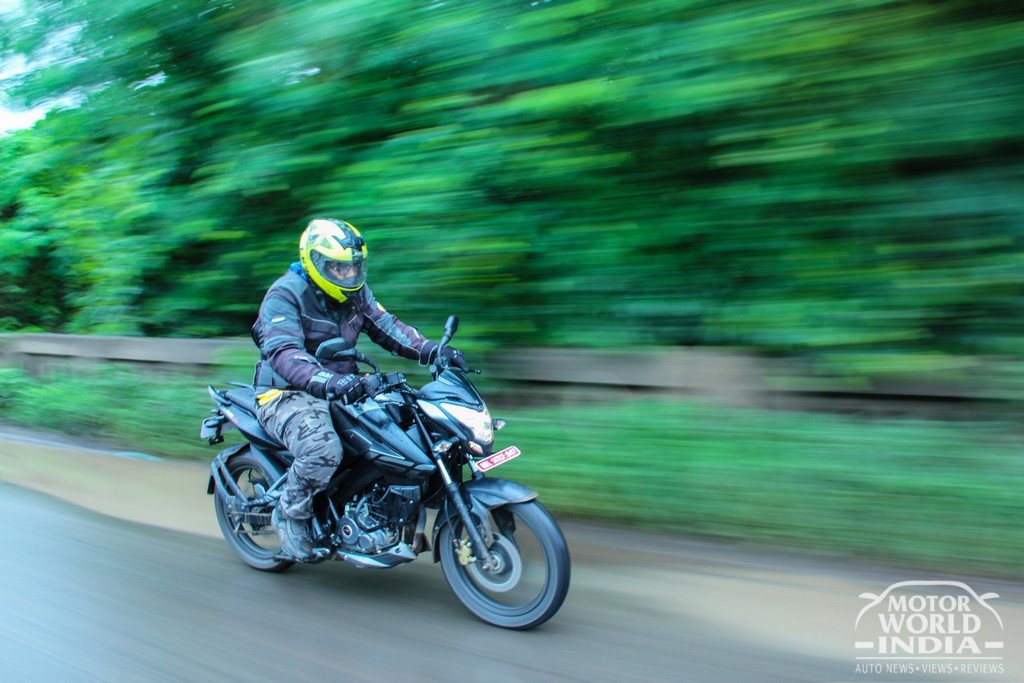 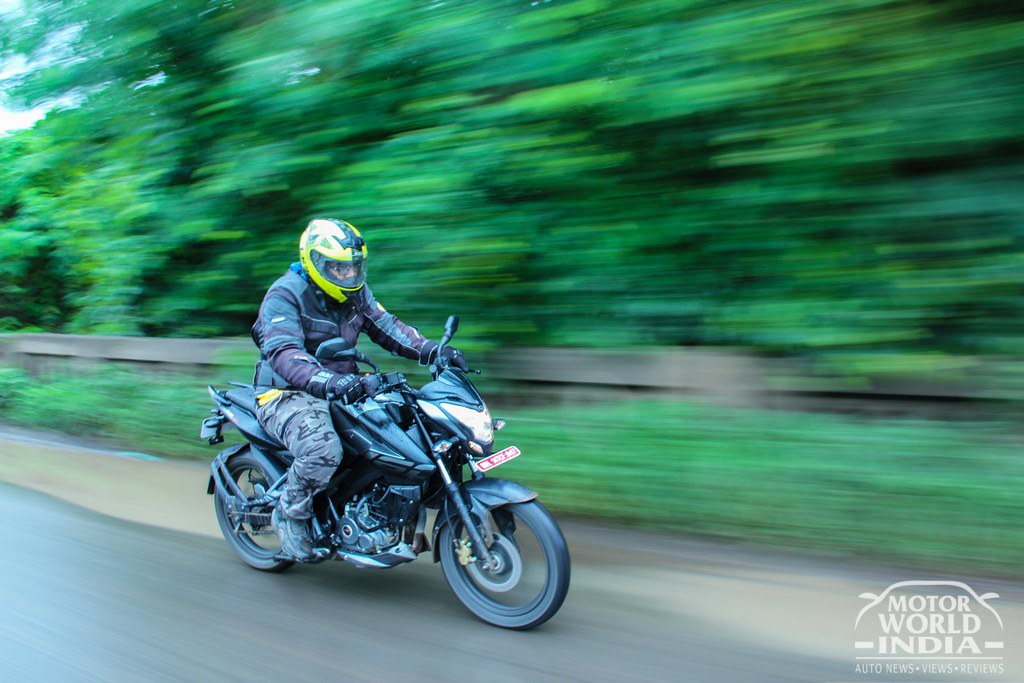 As the young Indian market matures to grow into being more style & performance-cautious, manufacturers are leaving no stone unturned to woo the customers, especially the Gen-Y of bikers. The sports-commuter market, typically the 160cc performance segment, has flourished surprisingly fast in the past few years and is currently dominated by Suzuki with its Gixxer, followed by Honda Hornet 160, Yamaha’s FZ 2.0 and TVS Apache not far back in the competition. It’s already a tight market to survive in, and to make their lives even more difficult, Bajaj Auto has launched their latest sports-commuter segment offering, the Pulsar160NS to add a little more spice in the market share race. It was long awaited, but when they have come, they have come in with a bang..! Definitely a performance-oriented, no-nonsense motorcycle from Bajaj Auto.

The all new Pulsar 160NS, is not the replacement for Pulsar 150 or any other Bajaj Auto product already on the market, but a new product in the Naked Sports family, heavily inspired from the current NS200. Officials at Bajaj Auto say that the NS160 caters to the performance & style cautious segment of buyers, which is a completely different market for them, and this launch will not affect the sales of the pre-existing Pulsar 150. Well, we shall see about that when the time comes. Another exciting news for all you Bajaj fans out there is that the AS series does not end with AS200 and AS150, and the family shall soon get an update. With this, Bajaj Auto now has a Pulsar in 5 different segments, all with a unique proposition offered and a differentiating factor built in them.
Talking about the NS160, it’s going to get difficult for other manufacturers to save their sales graphs with the Power to Play that Bajaj offers to the Sports commuter segment now. Undoubtedly the NS160 is the best looking among its competitors 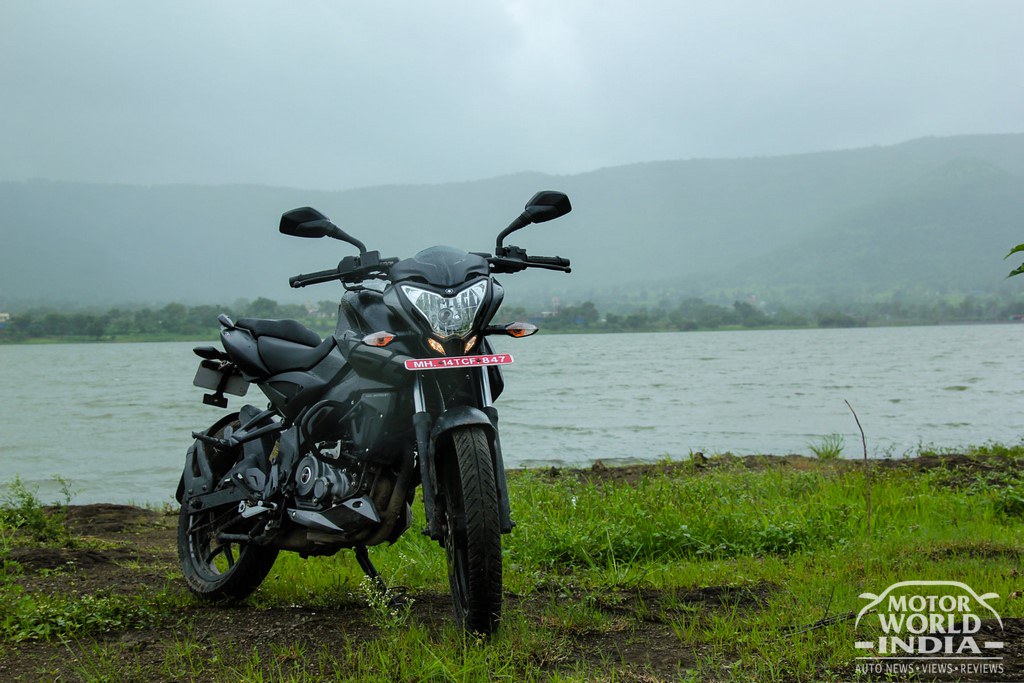 As we said, the Pulsar NS160 is one of the best-looking motorcycles in its segment. Highly inspired from its elder sibling, the NS160 shares the same chassis as the NS200. The suspension, wheels, body decals and paint schemes too are NS200 inspired. The rear wheel now comes with a mud-flap cover.The smart led-tail lamp, the mud-flap, the LS135 inspired panels, split grab rails and the skeleton number plate holder complete the rear end and take us one step closer to the end of this jigsaw. The final piece is the underbelly pan cover, that makes the bike look complete. Not only do these additional body parts add to the Naked Sports styling, they also smartly make the bike hold its bulky look. The tyres are thin as compared to all its competitors, and this is somewhat quite noticeable. 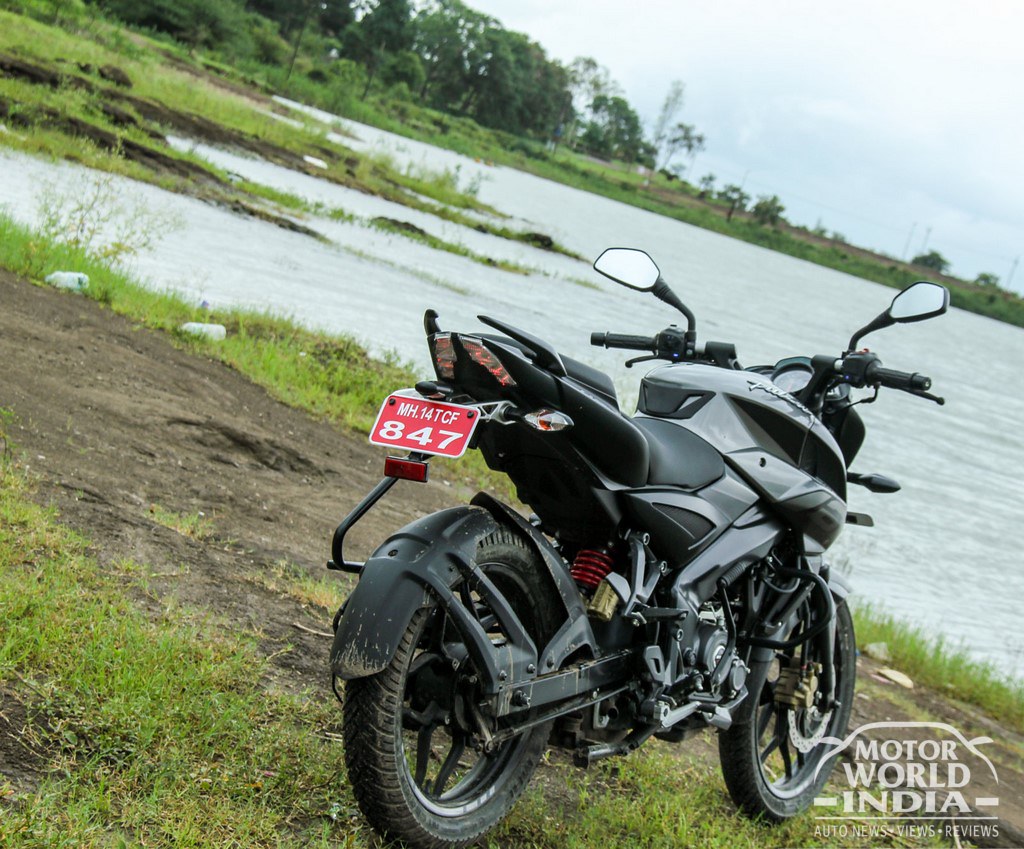 The bike is currently launched in a Grey-Black combination, but soon will be available in a red-black combination and a blue-black combination as well. The tank comes covered with smart decal work, adding to the styling value of the product.We would personally love to see some new colours from Bajaj Auto, as they have stuck to these same shades for a long period now. The instrument cluster too is inspired from its elder sibling and looks exactly the same, smart and trendy. Adding to its stylish aspects are the split seats and the clear LED blinkers. Bajaj has carried forward the underbelly exhaust heritage with the Ns160 as well, and we love the way it redefines how a motorcycle should look like. 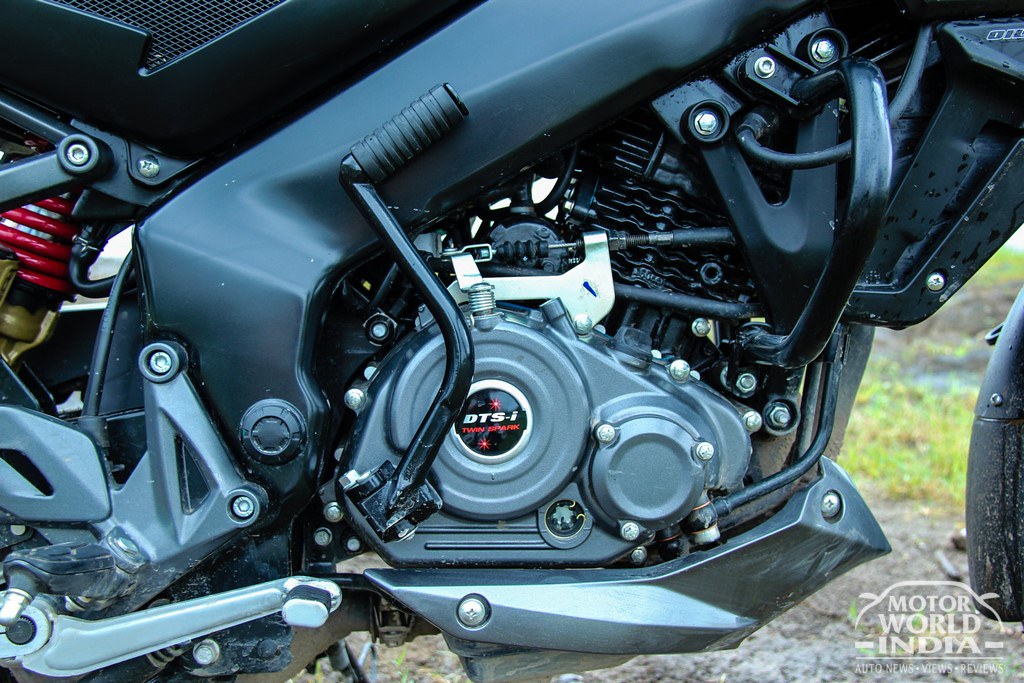 The Pulsar NS160 comes equipped with the all new 160.3cc single cylinder 4-valve engine developed specifically for this product. You might have heard that it is built on the same Pulsar150 engine platform, and if you have, it is incorrect. The NS160 mill is inspired from the powerhouse on the AS150, which is now tweaked with a longer piston stroke to deliver those extra ponies. It is not just that, what goes in making a fast machine, Bajaj has used a 4-valve setup, which is a first in class, which offers better & efficient combustion. Speaking in numbers, the 4 valve setup offers approx. 35-40% more intake & exhaust area, which means, more air can be pushed into the system, which in-turn will mix with appropriate amount of fuel and generate power efficiently. That’s what makes the NS160 the fastest 160cc motorcycle in India churning out 15.3Bhp @ 8500 rpm of power, best in category and torque figures of 14.6 Nm @ 6500 rpm. 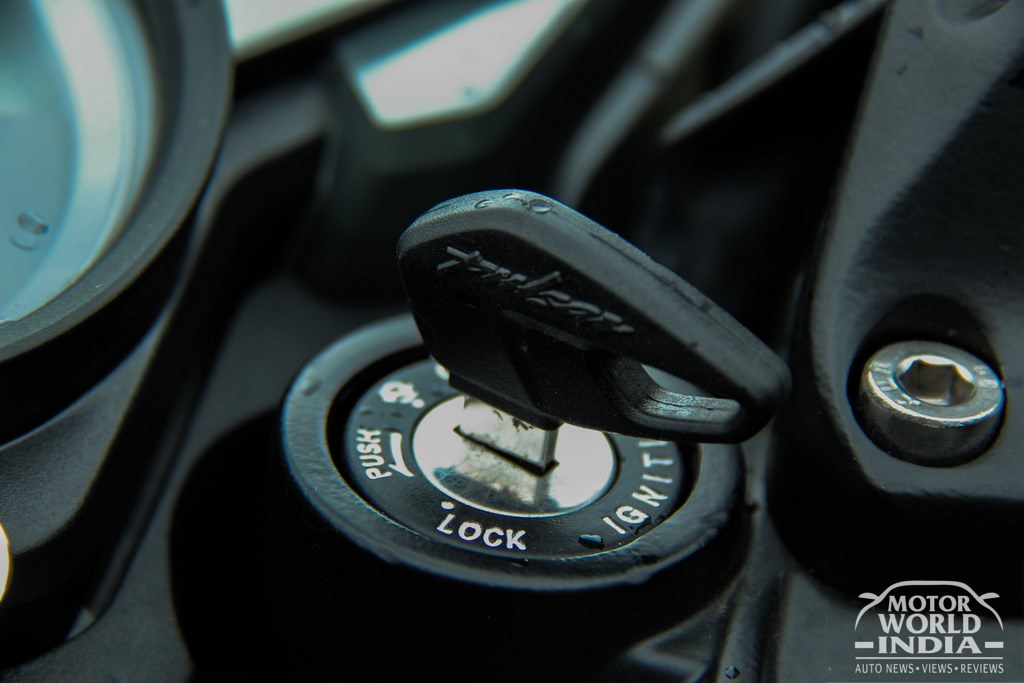 More power means more heat, and a hot engine is never a pleasure to ride. To take care of the heat dissipation and engine cooling, the Pulsar160 comes equipped with anoil cooling system, which is again, a first in class. The oil cooler works amazingly well and keeps the engine heat in check. This engine is mated to a 5speed gearbox, which sometimes feels inadequate. You feel that you would love to have a 6th gear there. This power mill is fuelled by a Carburettor setup and delivers in city mileage of around 42 kmpl. On the top speed graph, the bike does fairly well and races to triple digits quickly, with the power distributed throughout the rev band, we topped out at 116kmph. The bike allows cruising on 80-90kmph with any stress on the engine.
Another special feature of this engine is that it comes equipped with a kick start too. They have added this aspect keeping in mind their target customers. 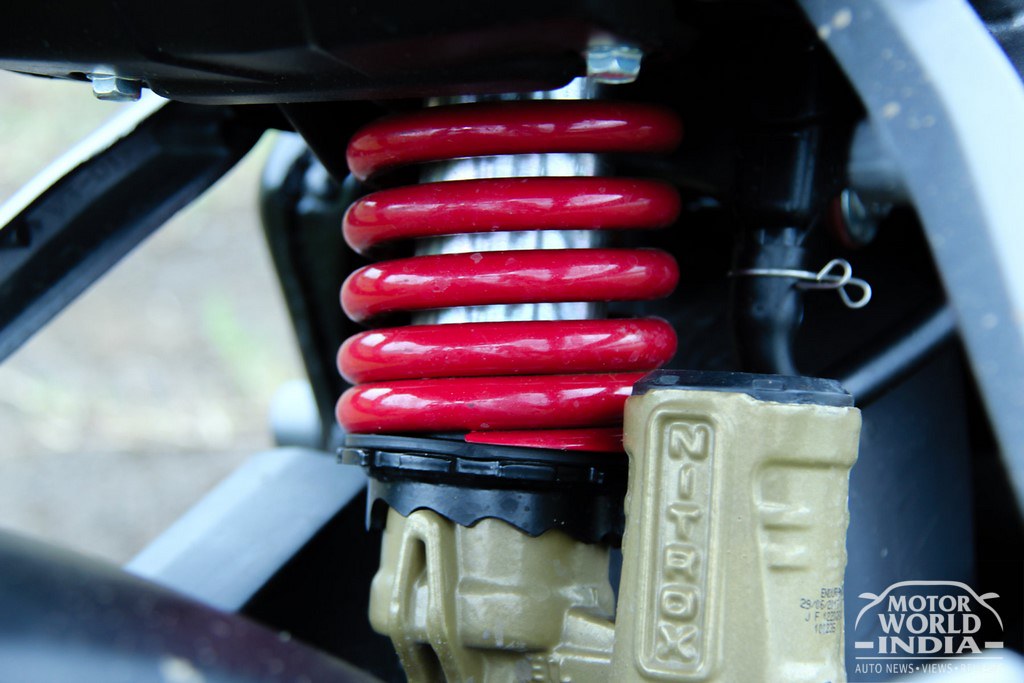 The NS160 shares the same perimeter chassis as the NS200, which grants the motorcycle the required strength and rigidity. The Suspension setup, though looks as on the NS200 is not actually. On the front we have telescopic forks, though the pipe size has been compromised, on the rear too, we have a mono-shock gas suspension. Both the setups are tuned to offer better damping, keeping in mind the comfort of the rider. The NS160 offers a smooth& comfortable riding experience. The NS160 comes equipped with Clip-on handlebars, and the riding position too, demands an aggressive stance from the rider. 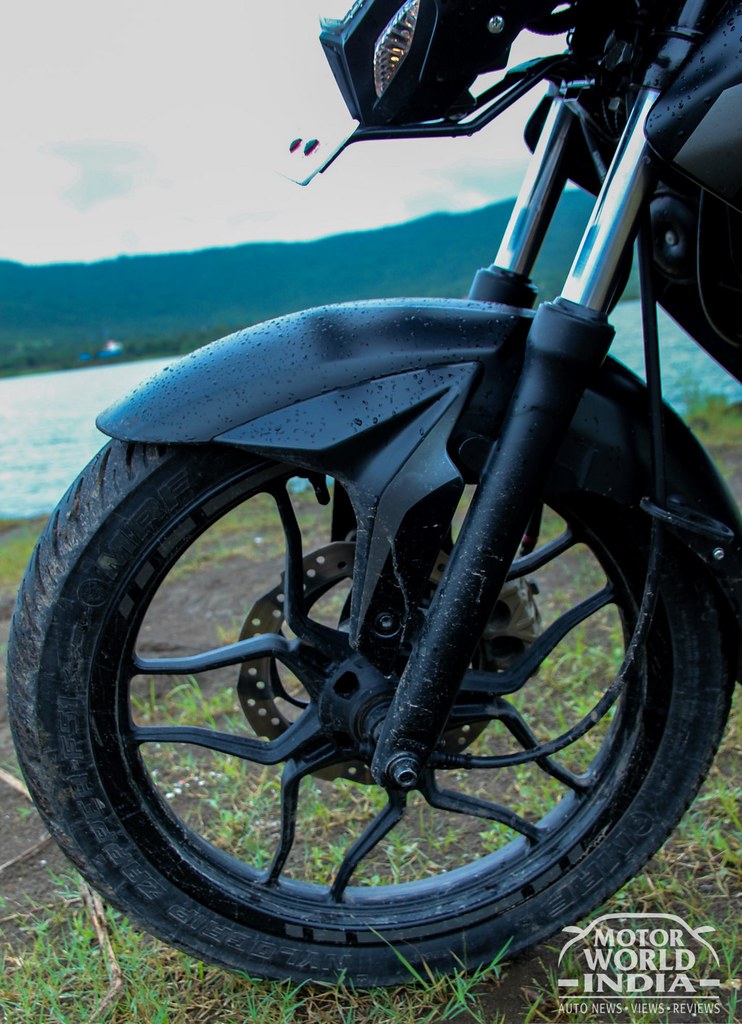 The NS160 comes equipped with NS200 design inspired 17-inch alloy wheels, but these wheels are smaller and are lighter in weight as compared to the elder sibling, which in-turn makes the new NS160 more light-weight and fast. Coupled with the allow wheels, Bajaj offers Tubeless MRF branded 80/100-17 on the front end and a 100/90-17 on the rear end. Yes, the NS160 has the thinnest tyres as compared to all its competitors, but this makes the NS extremely agile and ready for all situations. Such thin tyres would surely not be our choice for a high-speed cornering ride, but for the purpose, the NS160 is build to serve, the tyre setup serves the purpose effectively. We took the bike off-road to understand how the bike behaves, and it was very calm and composed, smoothly finding it way. The grip these tyres provide is fantastic and are trustworthy in all situations. 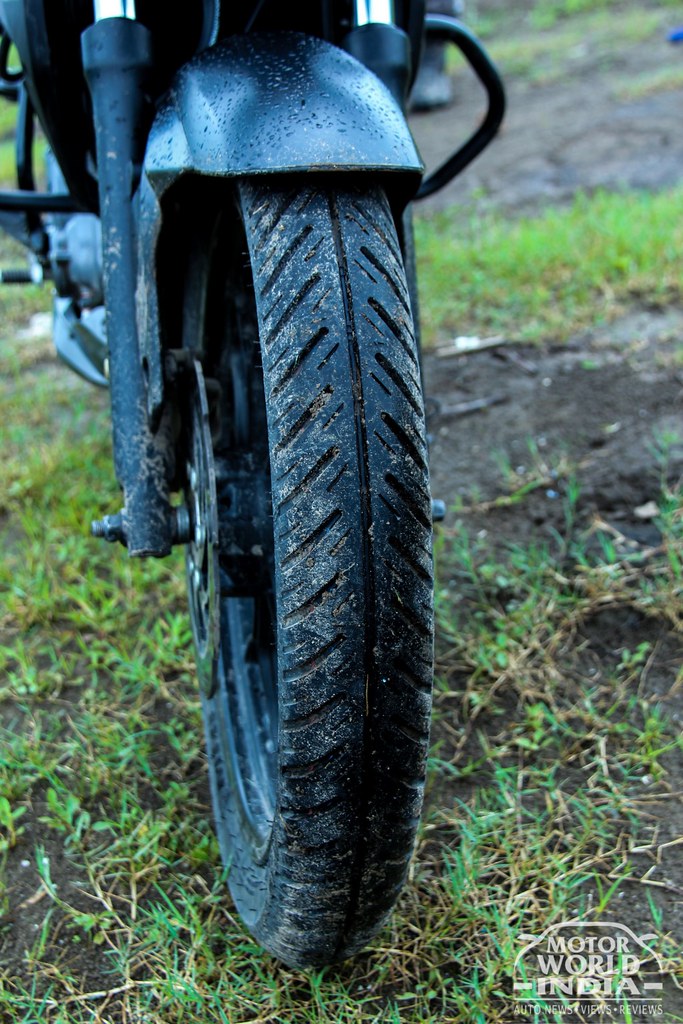 Yes, the bike can go fast, is very agile and handles beautifully well, but we are of the view that something that goes fast, needs to come to stop faster. And thuswe were surprised when we heard that Bajaj is not offering a rear disk brake option. But, as the test ride concluded, we changed our views. The bike just weighs 142kgs and is easily manageable with the 240mm disk brake supplied by Endurance on the front wheel and a 130mm Drum brake setup on the rear. In a market where Suzuki offers Dual Disk brake option, Honda provides a Dual disk with CBS, additional safety feature, it will be interesting to see how the market responds. This can turn tables and prove costly for Bajaj in the coming days.

Still missing that rear disk?
If yes, then you just need to hold on to your horses. Bajaj will soon be coming up with a Rear-disk brake model in the coming next few weeks. They shall soon be launching a Dual disk variant of the NS160. 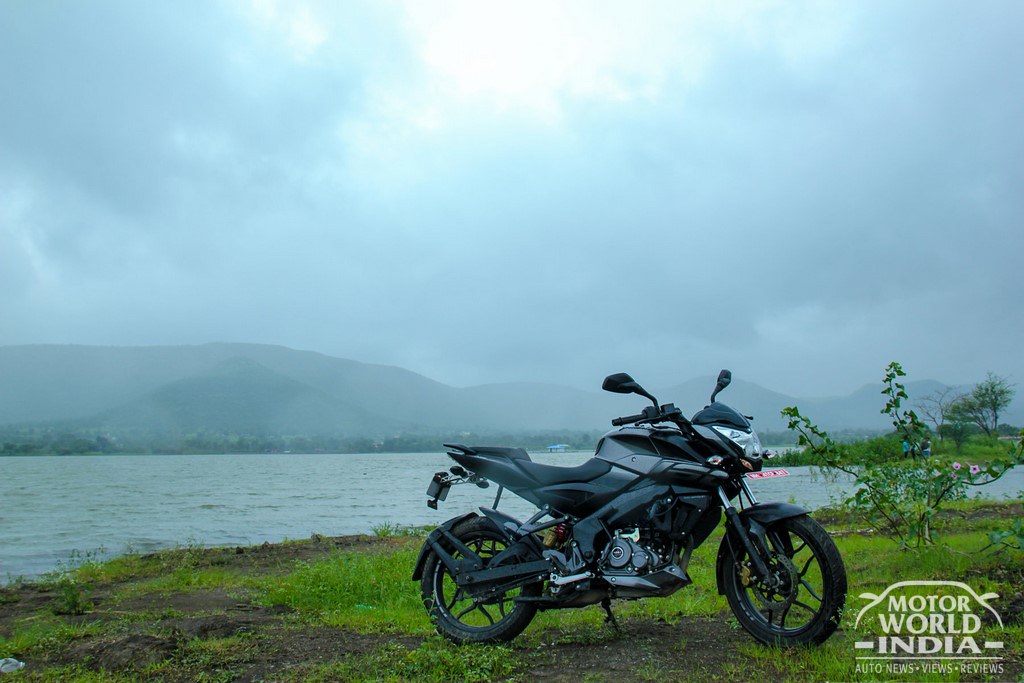 The new NS160 measures 2012mm in length, 803.5mm in width and 1060mm in height. With the saddle standing tall at 805mm, the ride offers an aggressive riding position. A few buyers might shy away due to the saddle height though. The bike offers a ground clearance of 176mm, which we believe is more than enough to ride through those cratered roads. The bike has a total wheelbase of 1363mm and is comparatively on the upper side as compared to its competitors. This allows for better sitting space for rider &pillion and affects the overall ride experience. The bike has a kerb weight of 142Kgs, though it weighs the highest in comparison to its competitors, the NS160 is still the fastest bike in its class. The fuel tank has a capacity of 12 litres with a reserve tank of 2.4 litres approx. This gives the NS160 a pretty good distance range before it runs dry of approx 400-450 km easily. The bike looks sleek and sharp, and that resonates with the Pulsar’s DNA. 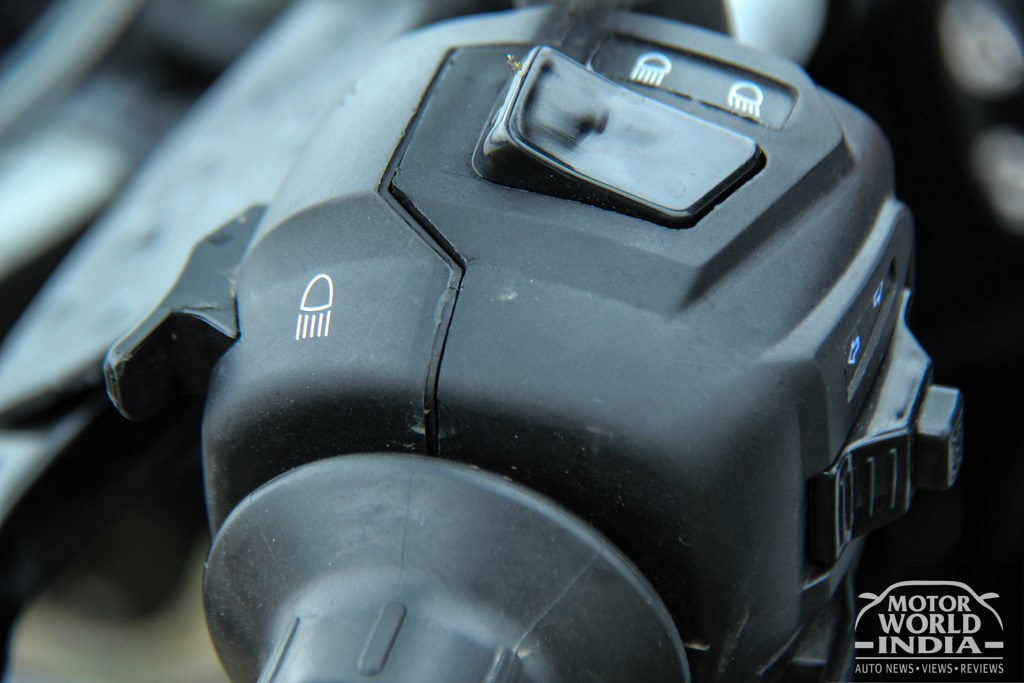 The NS160 is powered with a 12V DC setup, coupled with a Maintenance-Free Dry cell battery. The engine is based on Bajaj’s patented Twin Spark technology and uses twin identical spark plugs for efficient fuel combustion. The head lamp is carried from the elder NS and is equipped with a 55/60 watt bulb for effective lighting during nights. The tail lamp is also identical to that of NS200 and uses LEDs for lighting. 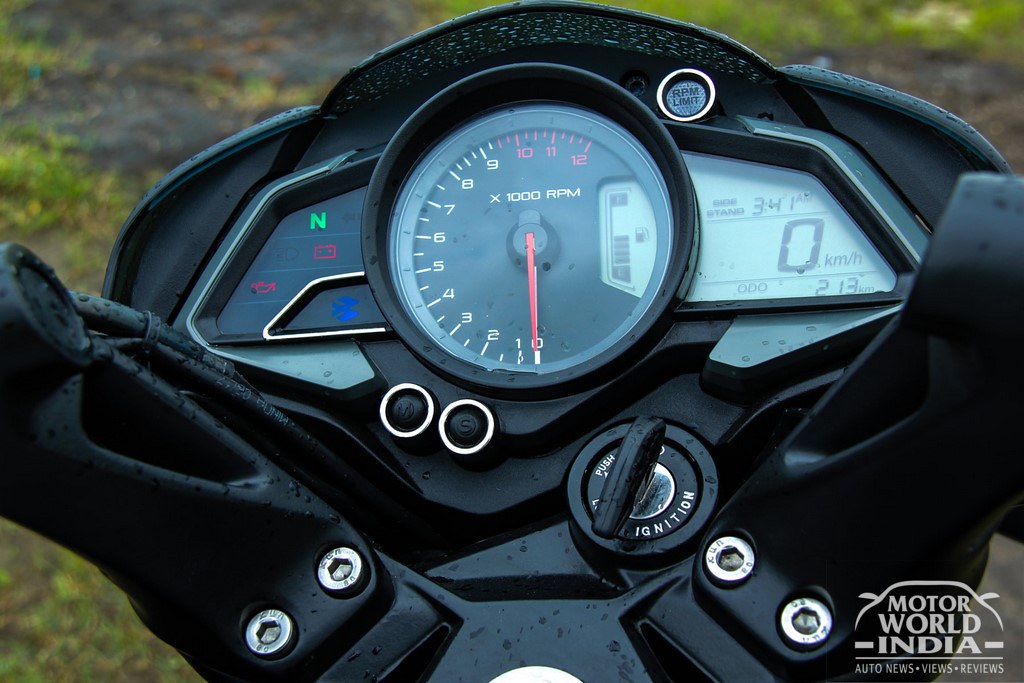 Other than that, the switch gears offer a good feel and are of quality and like all other Bajaj bikes are backlit. Like the NS200, the NS160 also uses the self-cleaning ‘Viscous Type’ air filter element. The NS160 comes with AHO (Always Headlight ON) enabled and misses on the switch on the right-hand switchgear. The instrument cluster is part analogue and part digital directly carried forward from the existing NS200. The Analogue console provides information like Neutral Light indicator, Signal light indicator, low oil level indicator, battery indicator and a high beam indicator. The Analogue tachometer sits in the between, fused to the digital instrument cluster. This digital cluster houses the Trip meter, Odometer, Time, Fuel level indicator, Side stand indicator and the Speedometer. 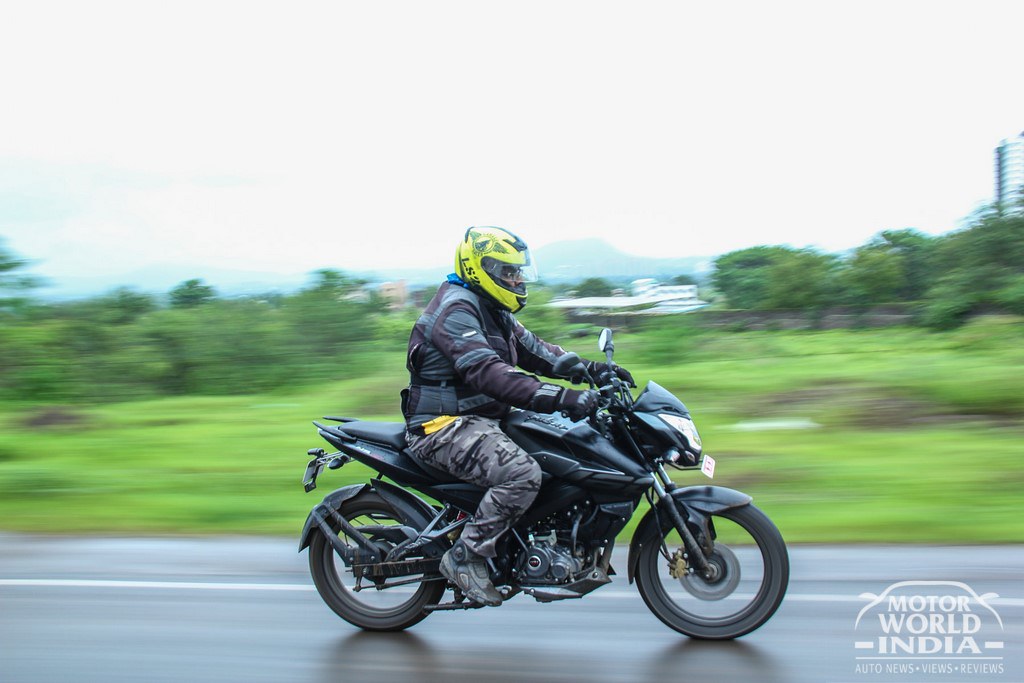 Priced at Rs. 78,400/- (ex-Delhi), the Pulsar NS160 has been priced very aggressively. The NS160 comes across as a very promising daily-purpose bike, built keeping in mind theGenY buyers. From our test ride experience, we can confidently say that the Hornet, Gixxer and Apaches are in for a tough time. Weare pretty impressed with the power delivery, refinement,looks, agility and handling the NS offers. Along with the NS, Bajaj Auto offers a wide network of Service stations and dealerships, for servicing and maintenance of the bike across India. 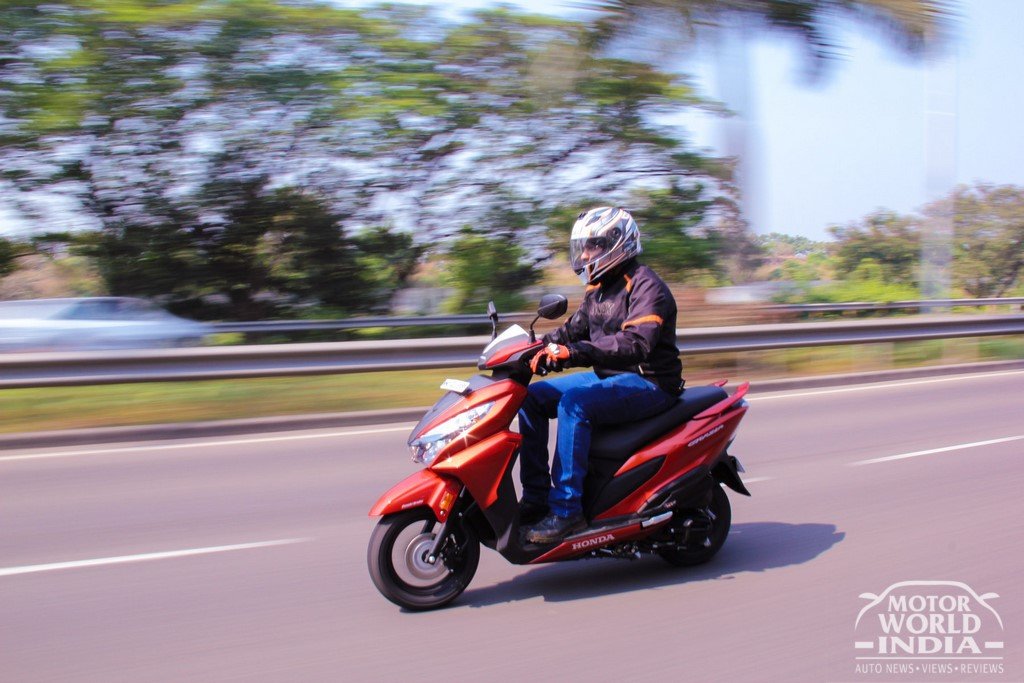 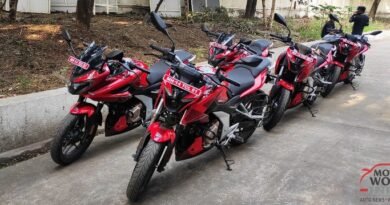