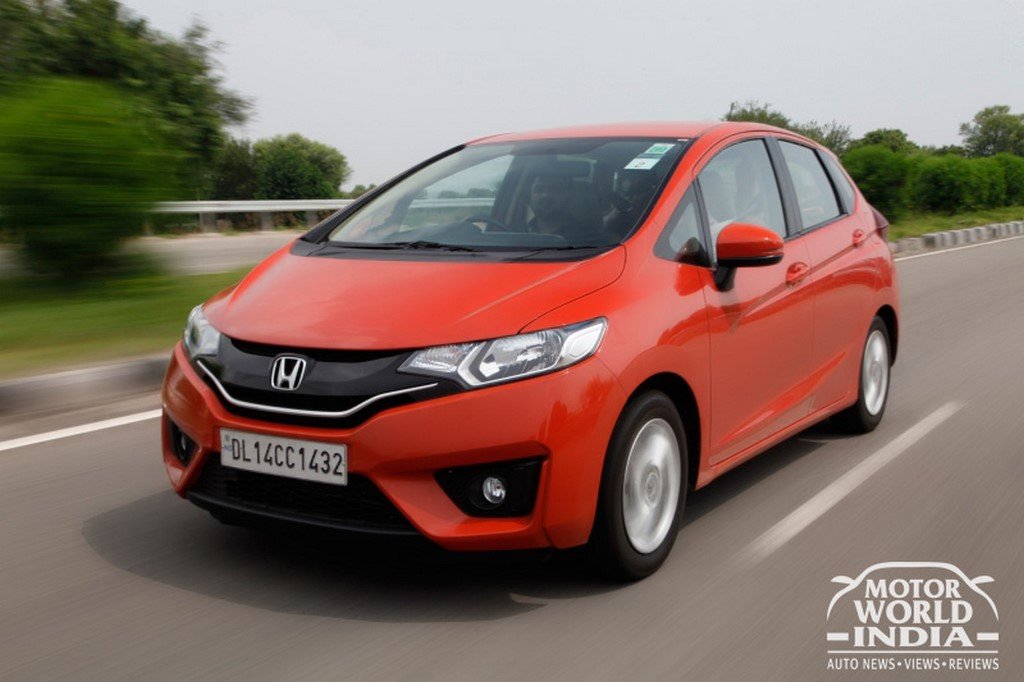 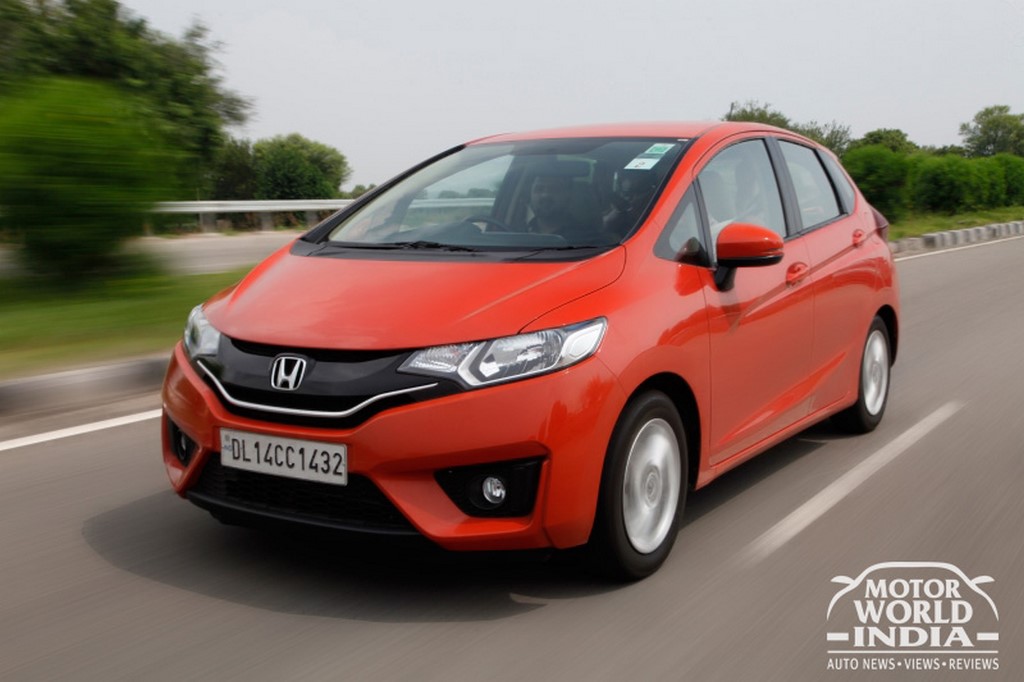 From a wet and rainy Mumbai morning we landed into a dry and sunny Jaipur noon. The reason for this travel was celebrating the first birthday of the all new Honda Jazz that was launched here last year. A handful of us auto journos had the privilege of being invited to Rajasthan for the Jazz Celebration Drive by the movers at Honda or `San’ as they are called in Japanese. 6 sparkling Honda Jazz were lined up to welcome us for this rather special drive at the Marriott, close to the airport. After a quick lunch and briefing we were all set to begin the drive that would take us to a place called Samode, 55kms away from the city. It happens to be a village on the outskirts of Jaipur and the Samode Palace where we were heading, dates back to the 16th century when it was built by the Rawals. Were we in for some royal Rajasthani Birthday Celebration, is the first thing that came to our minds! 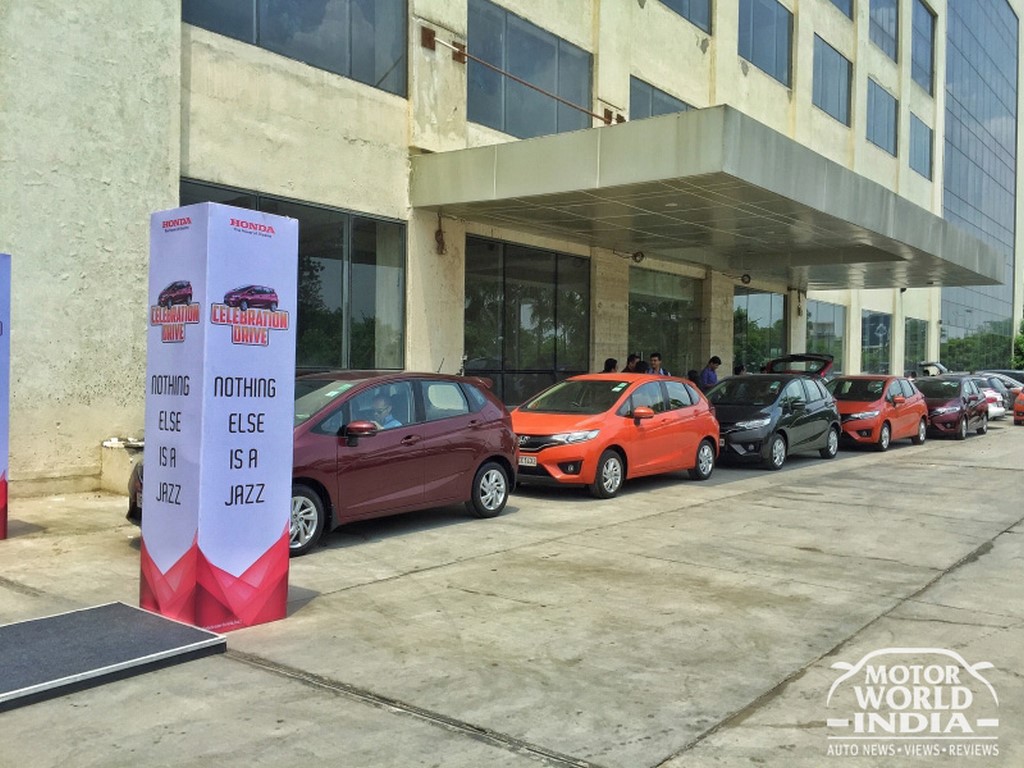 As soon as we were handed the keys to the Jazz CVT Automatic Petrol, we started off from the flag-off area. Passing by the busy roads in the Pink city, we hit the Agra-Bikaner bypass road that connected to the New Sanganer Road. Then onto the Gopalpura bypass that finally connects the Delhi Ajmer Expressway. Roads got wider and the Honda Jazz ate away the distance in style. Each car had a batch of four journalists and we, at MotorWorldIndia, had Motorbeam (Javeid), Rushlane (Sagar), Financial Express (Vikram) to give us company. 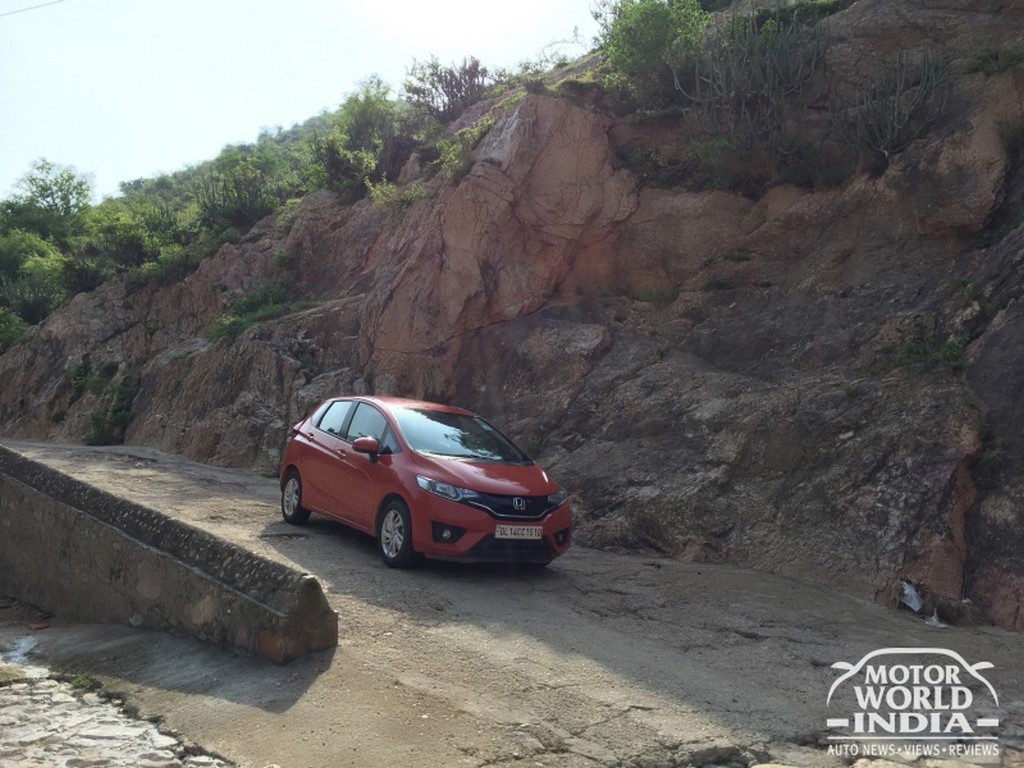 In the welcome kit that was handed out to us, we were given instructions to assemble on a specially prepared track near the Samode Palace for some activity. We reached there after breezing through some enchanting Rajasthani countryside, stopping for a few photographs and driver changes amongst us. Let us add here that the Jazz CVT Automatic was extremely fun to drive and the exertion level was very low in our entire journey. Upon reaching there we were told that each car and its members were to be a team for the activities. 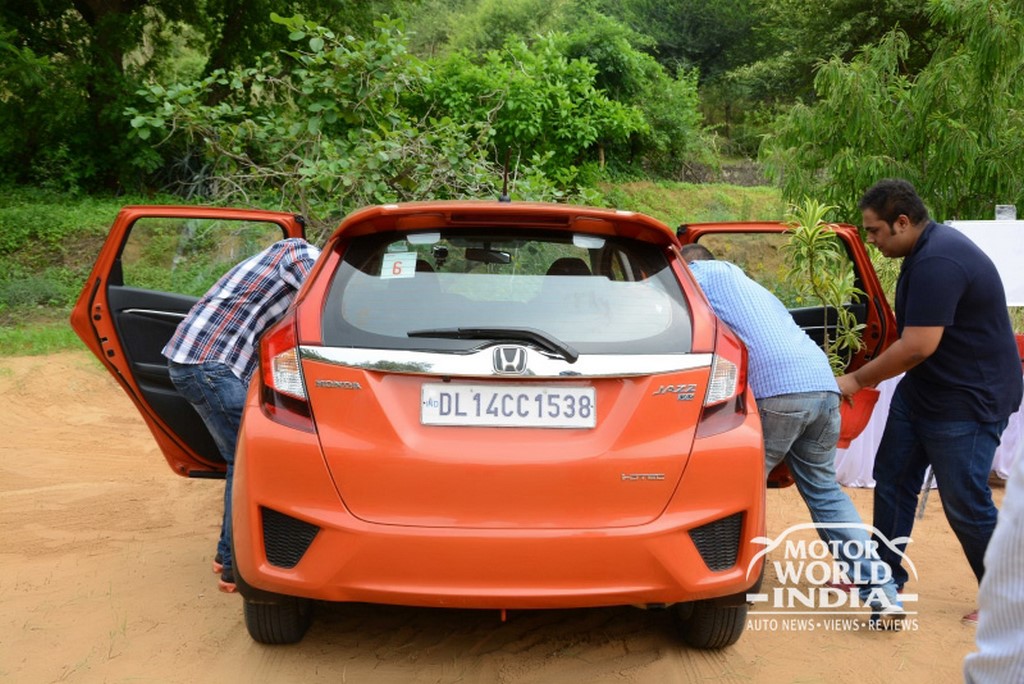 The first activity was loading a few props into the Jazz in the best way possible in the fastest time using the Magic Seats feature on the car. The props included a pair of pots with trees in it, a full-sized bicycle, a pillow and a quilt. We had six teams in total, so it was two teams at a time that did this activity. We had a team huddle and decided how to go about our drill. Everything was decided and when our turn came we performed as a unit, first came in the set of pots with the middle row seats folded up. Then the boot flipped open, rear parcel tray pulled out, middle row seats folded down and in came the bicycle. After this we had to get the cycle out and then fold down the front passenger seat making sure the headrest is removed and one of us is sleeping there on a pillow with the quilt covering him. Hurray! We did the entire drill in the best time beating all the 5 other teams. 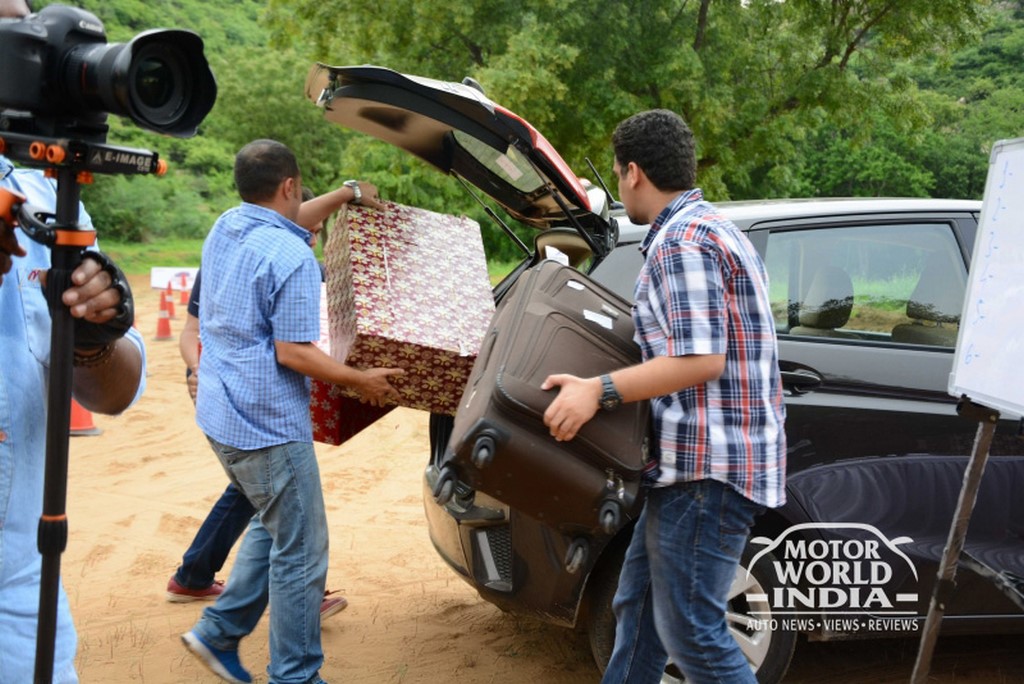 The next activity was utilizing the Jazz boot area of 354-liters to the maximum by fitting in the different-sized suitcases and boxes in there. The bottom-line here was to get the boot lid closed cleanly. We once again got into a team huddle and got our plan of action ready. When our turn came it was extremely easy for us to fit in 2 large trunks and 2 medium sized suitcases in the boot with the boot lid closed rather cleanly. We won this activity too with ease, two down in a row for us till now. 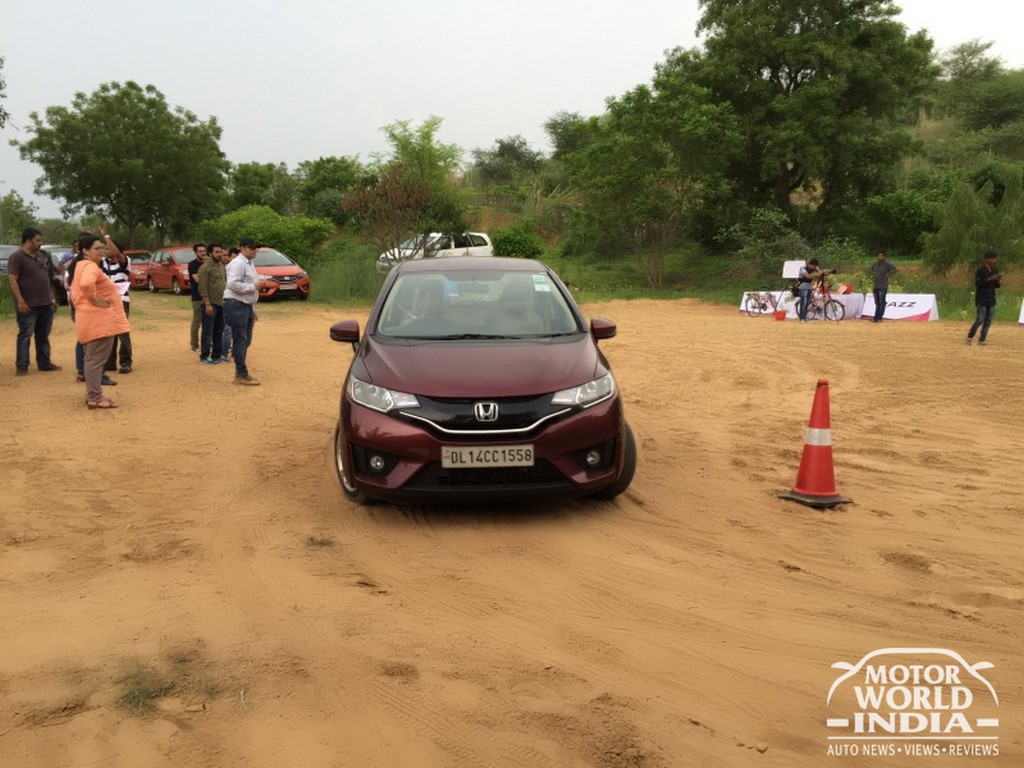 Next and the last event for the day was driving the Jazz through a predefined slalom. 2 cars were put on duty for this and off went all the competitors one by one. The bottom line here being plus 10 seconds added to your overall timing upon touching a cone. The 5.1-metre turning radius of the Honda Jazz made driving through the closely kept cones fun to do though we needed to reverse on one or two occasions where the distance between the two cones was very tight. Every team did this activity one by one while here too, we won it, being the best overall team in combined timing. Finishing the day on a very happy and winning note, we reached our destination, the Samode Palace Heritage Hotel, where we were welcomed with some luxuriously traditional Rajasthani hospitality. As mentioned, this is a 400-year old palace which gives you an amazing feel of true Rajasthani royalty. 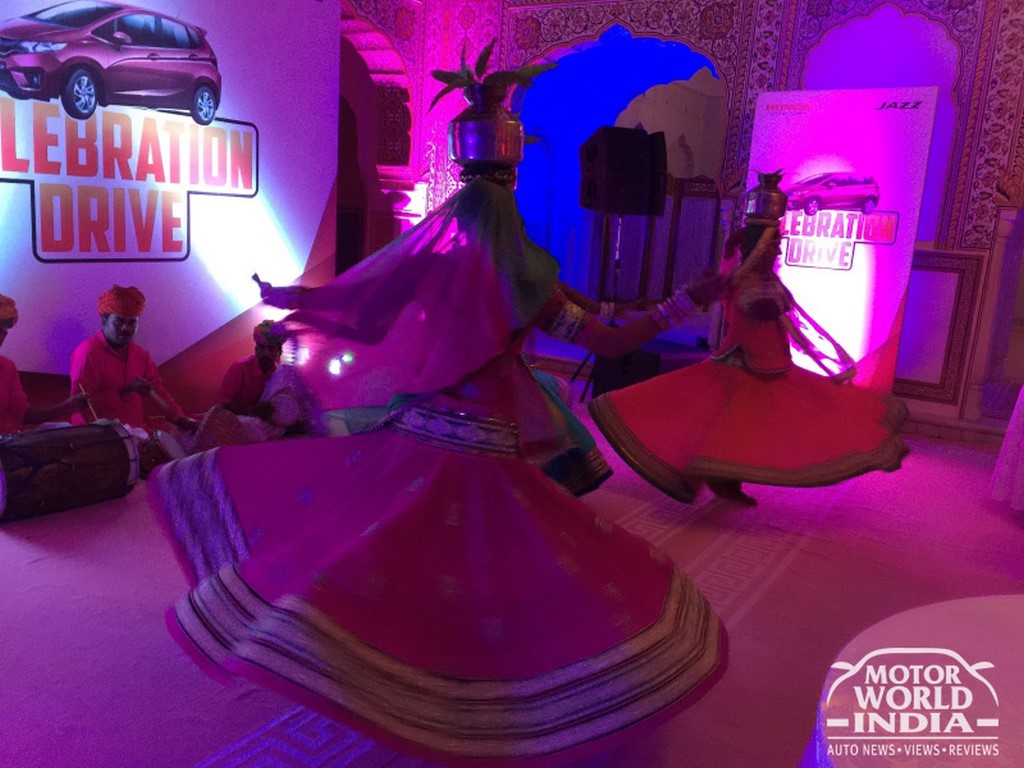 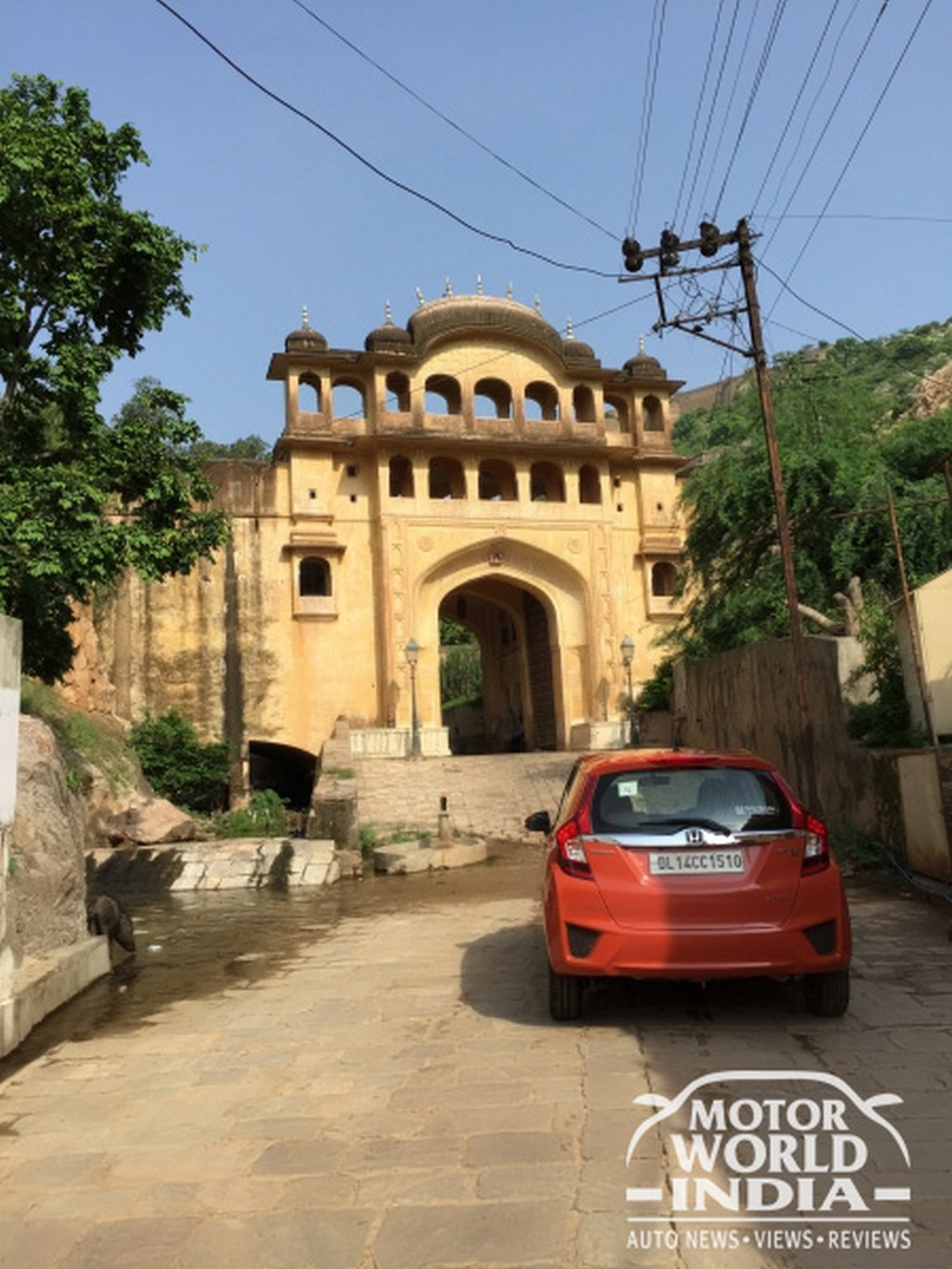 Day 2 saw us grab some breakfast and assemble in the main departure area. We drove out of the Samode Palace area and through the narrow lanes that went across the village. The last finale of the activity being the biggest, we were given a clue using which we had to figure out the exact historical monument and reach the place, click a pic, then get the second clue and so on. There were five clues in all which needed to be solved to win this unique treasure hunt. 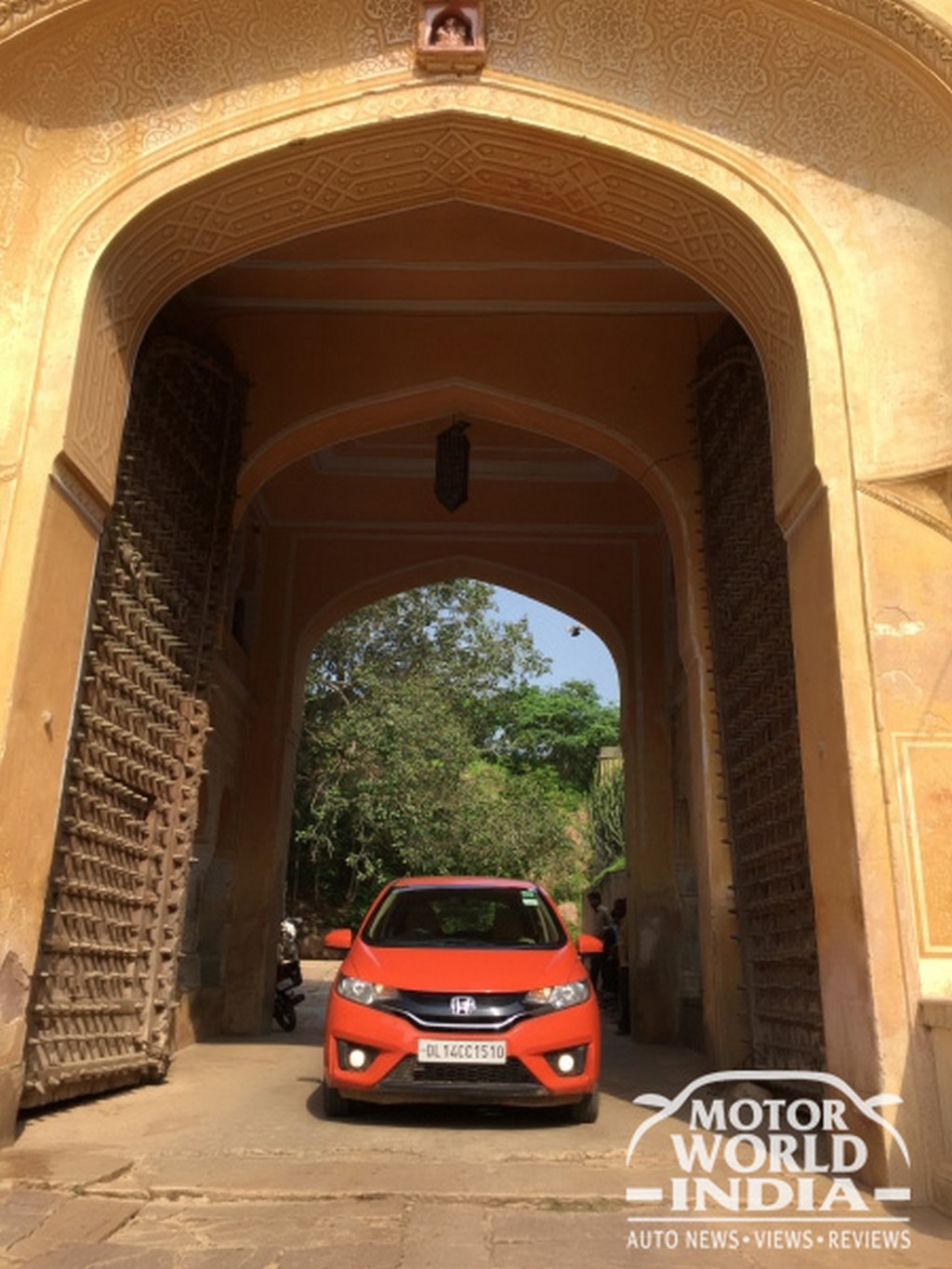 The first clue took us to Amer Fort, where we had to take a pic of an elephant and then show it to the official stationed there to get our next clue. We got this one done and quickly grabbed the next clue that took us to the historical Hawa Mahal, which is located bang in the centre of the city. The Honda Jazz behaved extremely well in the traffic conditions. We reached Hawa Mahal and took a team selfie with the monument in the back drop as asked in the task and grabbed the 3rd clue. This clue made us hunt for a famous eatery in Jaipur that’s known for its sweets and kachoris. The task here was to reach the eatery, buy the kachori and take a pic of the bill. Show it to the official there who will then give the 4th clue. 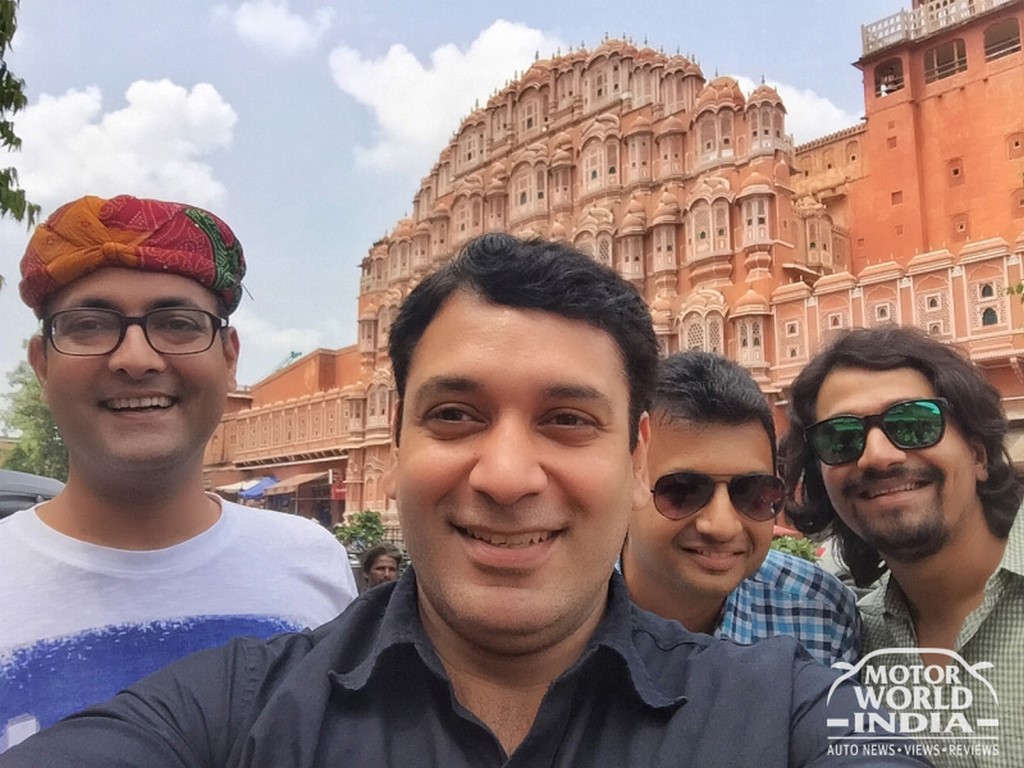 After a bit of research we made out the place to be Laxmi Misti Bhandar also known as LMB. This is a famous eatery that’s become a part of the Jaipur history since 1949. We rushed through the busy traffic and hunted for a parking place. One of us ran to LMB and ordered some freshly made kachoris. Paid the bill and snapped a pic. This is when we got our 4th clue. This was a tricky one as we had to find the best lassi in town. 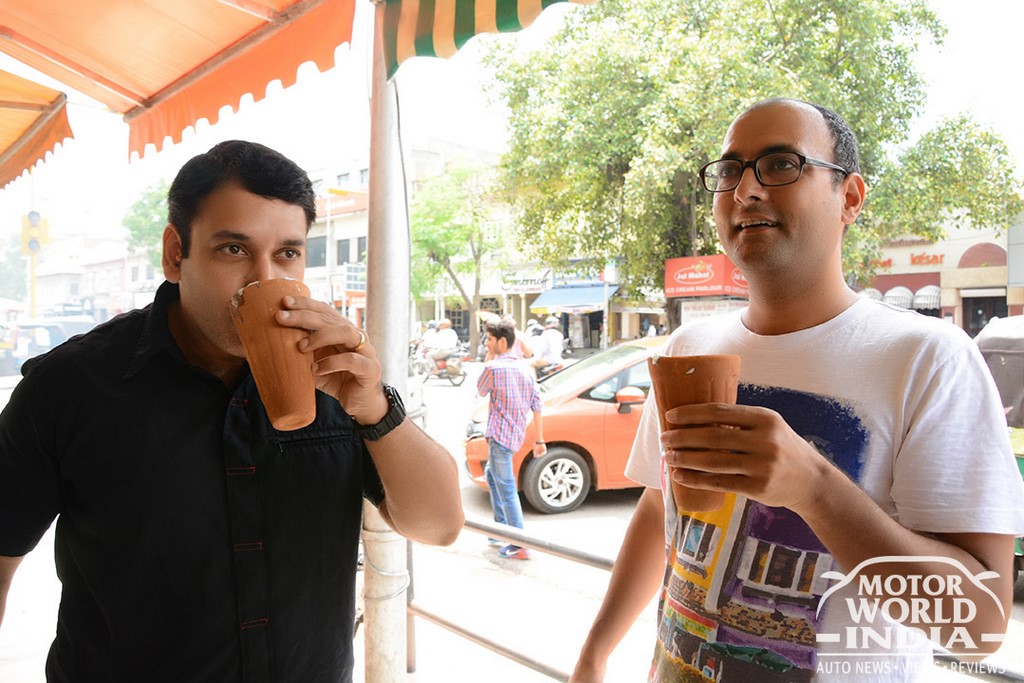 We did a lot of research and finally zeroed on Kishan Lal Govind Narayan Agarwal Lassiwala. We had to drink the large lassi served in earthen clay pots and click a pic of the empty pot to get the last clue! After gulping down the last drop of the yummy, creamy lassi, we clicked a pic and got the penultimate clue. This clue asked us to tank up the petrol at a fuel pump near the Marriott hotel and then the official would calculate the overall mileage achieved by us on both the days during the entire run. We hunted down the petrol pump, sighted it and soon filled up the tank. 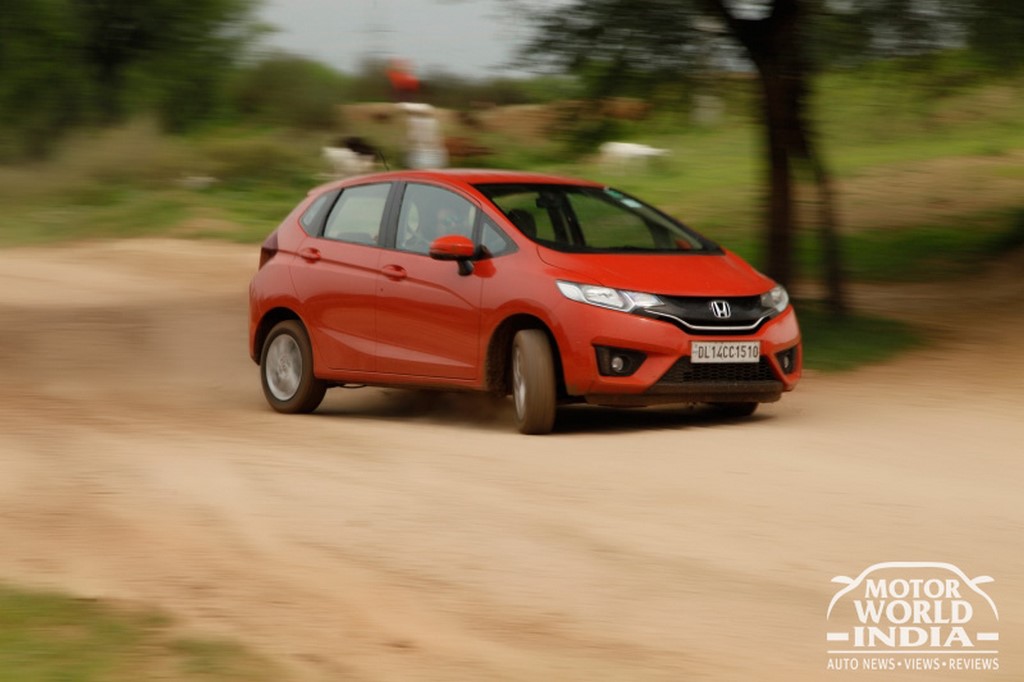 Upon enquiry, the official said that we were the first team to reach there, confirming that we were close to winning this one too. Relieved upon hearing this, we excitedly exchanged high fives amongst our team members and proceeded towards the end point at the hotel. Surprisingly, no other team made it back to the finishing point for the next one hour after we had reached, proving us to be the winners all the way! This exciting and very different birthday celebration organized by Honda, came to end on a very happy note for us. The drive not only had a lot of fun and excitement involved, but also very cleverly refreshed the strong virtues and qualities that Jazz known for. 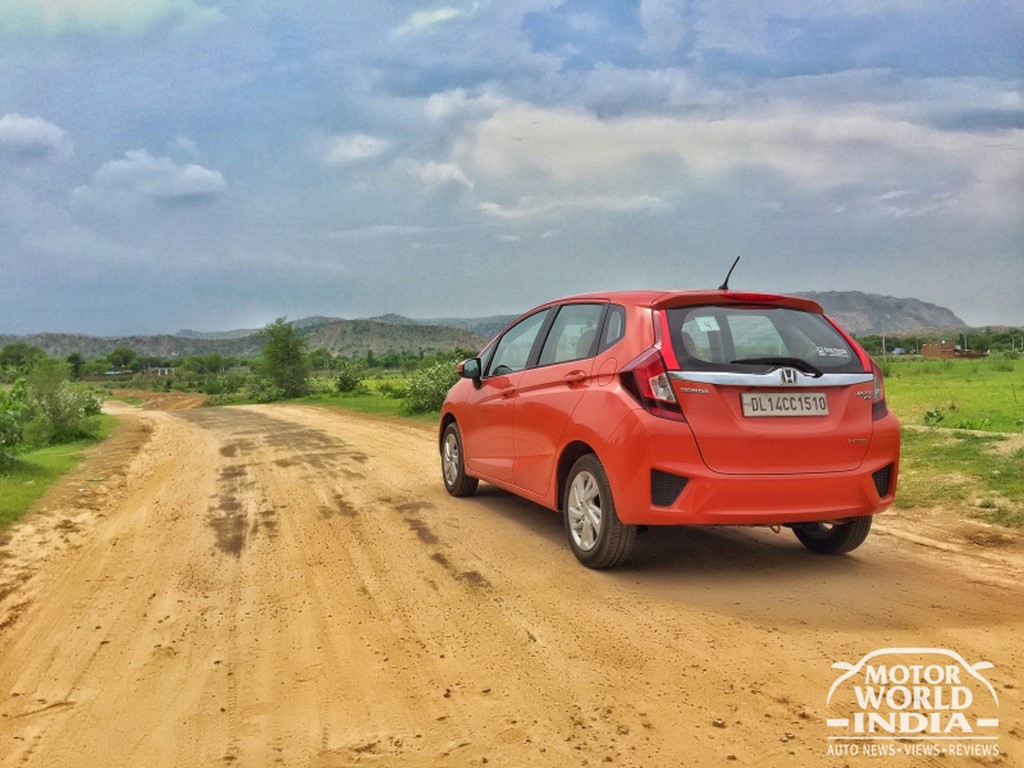 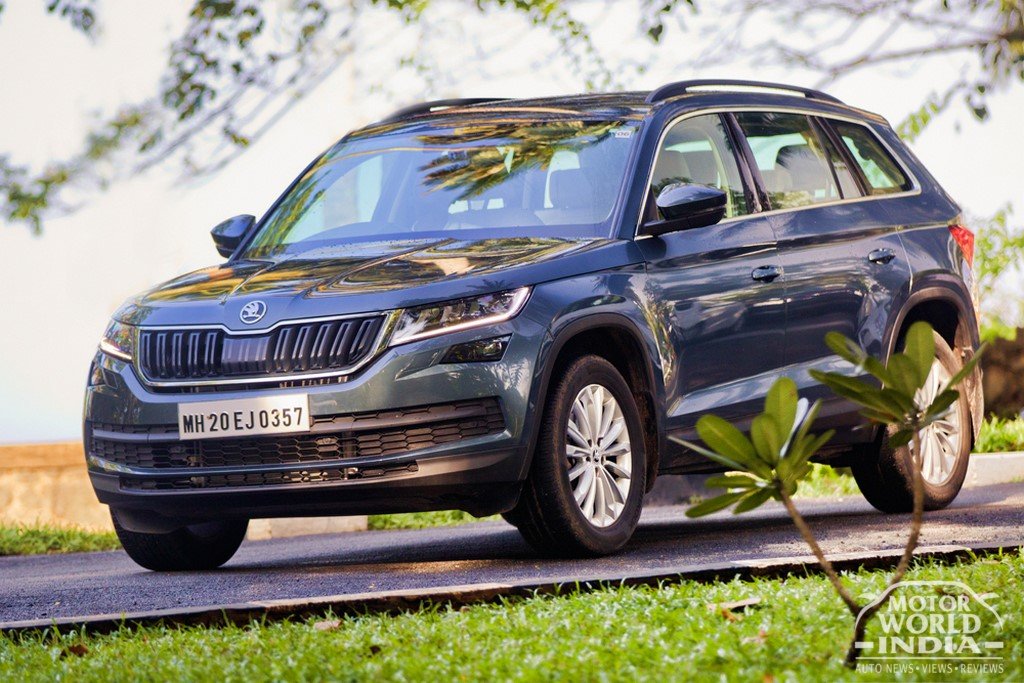 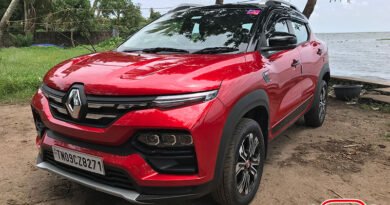 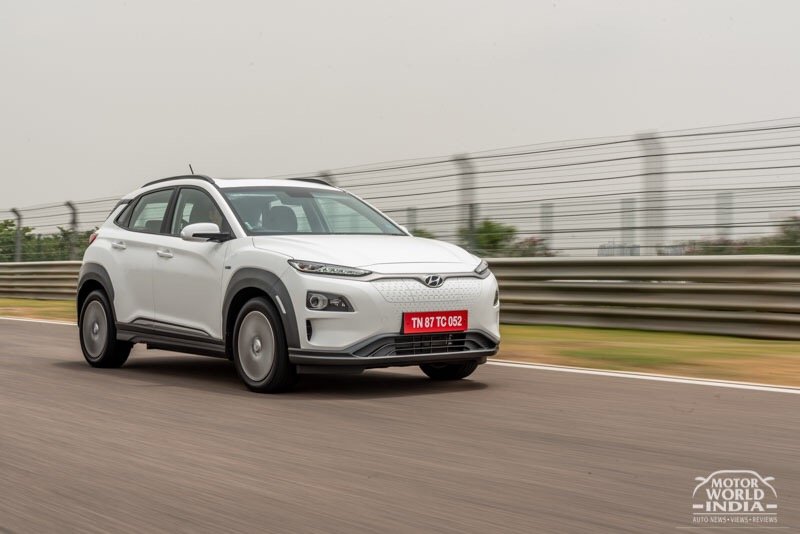