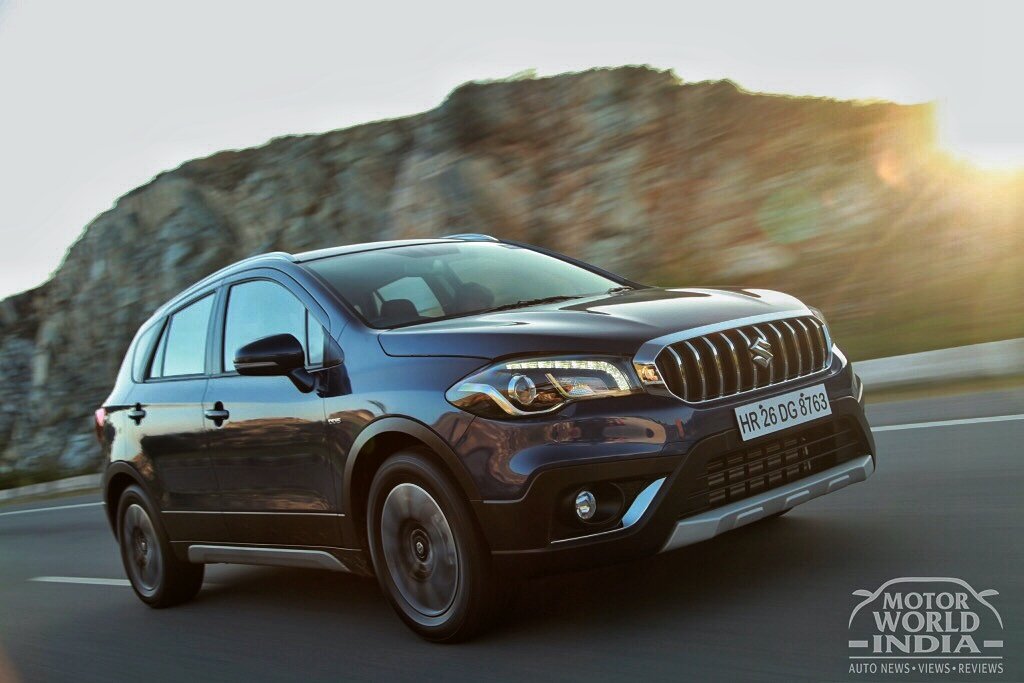 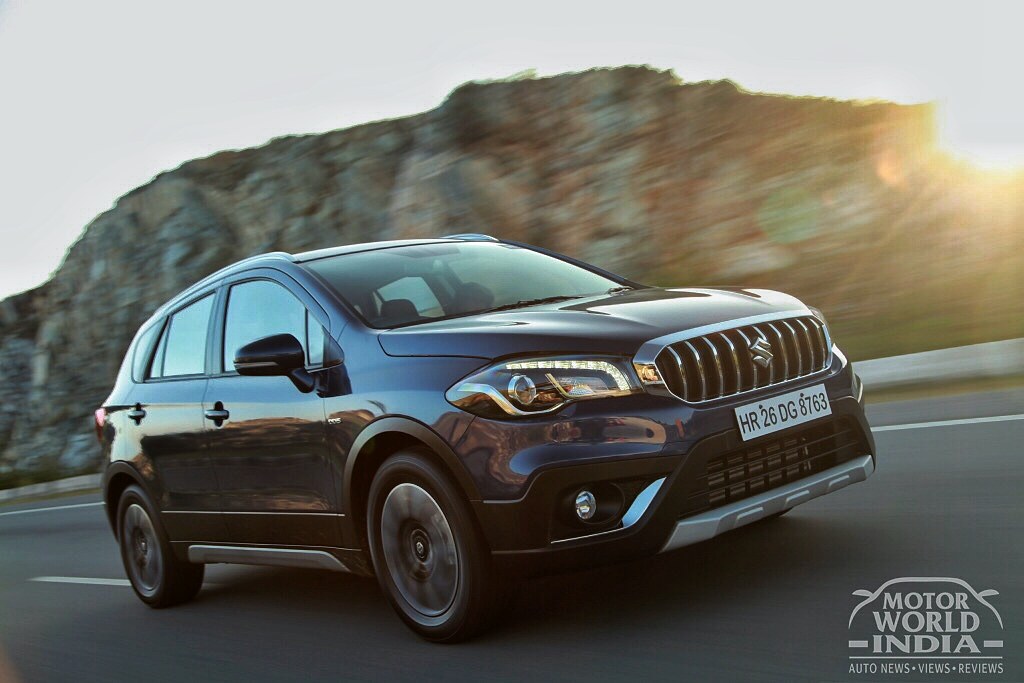 Maruti Suzuki India’s #1 carmaker launched their premium outlet Nexa in 2015. Their first offering through this premium dealership channel was the S-Cross. This was Maruti Suzuki’s Premium Crossover offering and the first of its kind from the Japanese giant for the Indian market. The model received a lukewarm response on launch, as the pricing was on the higher side. Knowing the market and the buyers sentiments well, Maruti Suzuki quickly reworked the pricing on the S-Cross lowering it, not only this, they also sent refund amount via cheques to existing customers giving them back the price difference. After this the S-Cross sales picked up decently well. It’s been a while the S-Cross has been around, and it had begun to look dated. Suzuki globally facelifted the S-Cross, and Maruti-Suzuki is all set to launch the latest model here in India. We have driven the 2018 Maruti Suzuki S-Cross across some lovely wide roads, hilly roads and narrow village roads of Udaipur. And here is our extensive road test review for the car that will be the flagship model for the largest car maker of the country. Read on.

Food For Thought: The SX4 is supposed to be the father of the S-Cross. The S-Cross is the successor to the SX4 Crossover that was co-developed by Suzuki along with Fiat. Fiat sold the same as the Sedici in Europe. The SX4 sedan was replaced by the Ciaz sedan while the S-Cross replaced as the crossover version. The 1st generation of the S-Cross saw production in 2013 and landed in India in 2015. The S-Cross also is available as a 4-wheel drive version in some markets with the SX4 S-Cross badging. 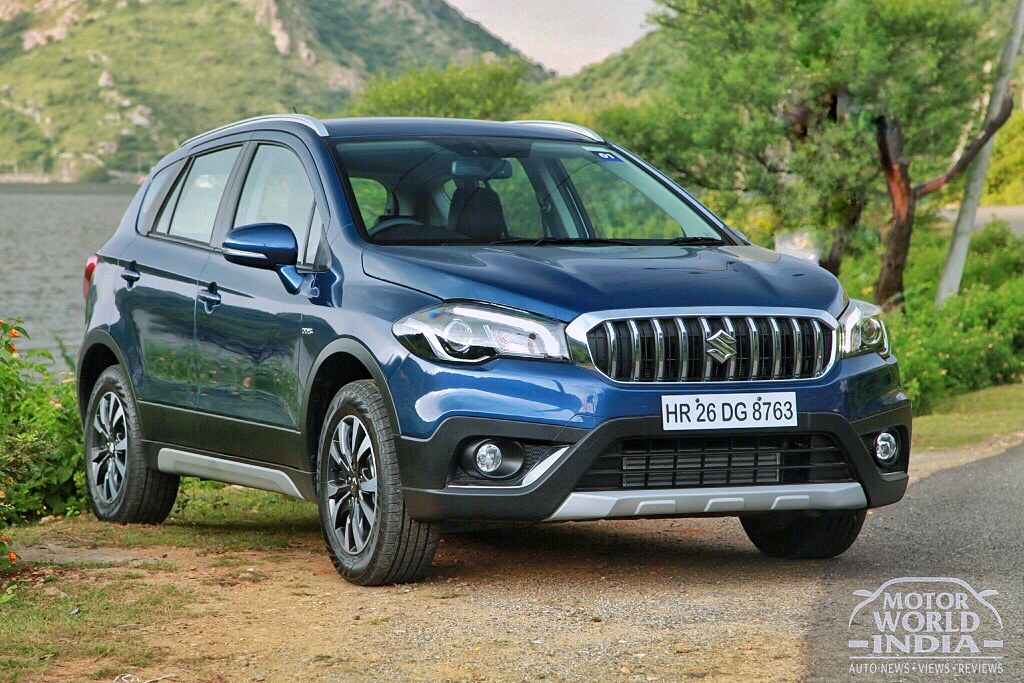 Now one look from the front at the 2017 S-Cross is enough for you to make out that the car has undergone some good cosmetic surgery. The front end is totally redesigned. Out goes the closed mouth grill and in comes a brand new grill that’s made of 10 vertical slats in thick chrome along with chrome hexagonal border running surrounding it. This grill design reminds us a lot of the ones that are on the Maseratis. Adding to the face value of this all new front end is the striking, differently designed headlights. These projector headlights get a sharp design that extends back into the side fenders and also run down into the bumper. 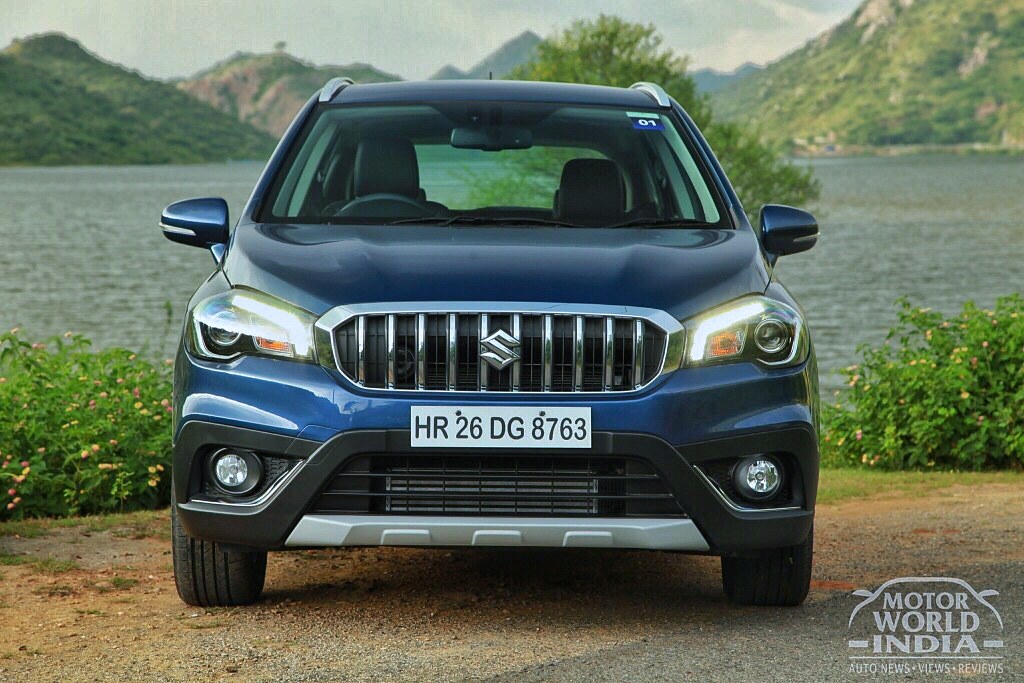 Extremely attractive-looking diamond style day time running lights take their place as eyebrows on the headlights in form of a thick band that lights up with a soothing white glow. The front bumpers get totally redesigned and now come with nice blending black portions that run across the lower half of the bumper and on the air dam. The bumpers also get a prominent faux skid plate in silver grey finish along with round fog lamps that add essence to the SUV-like front fascia. 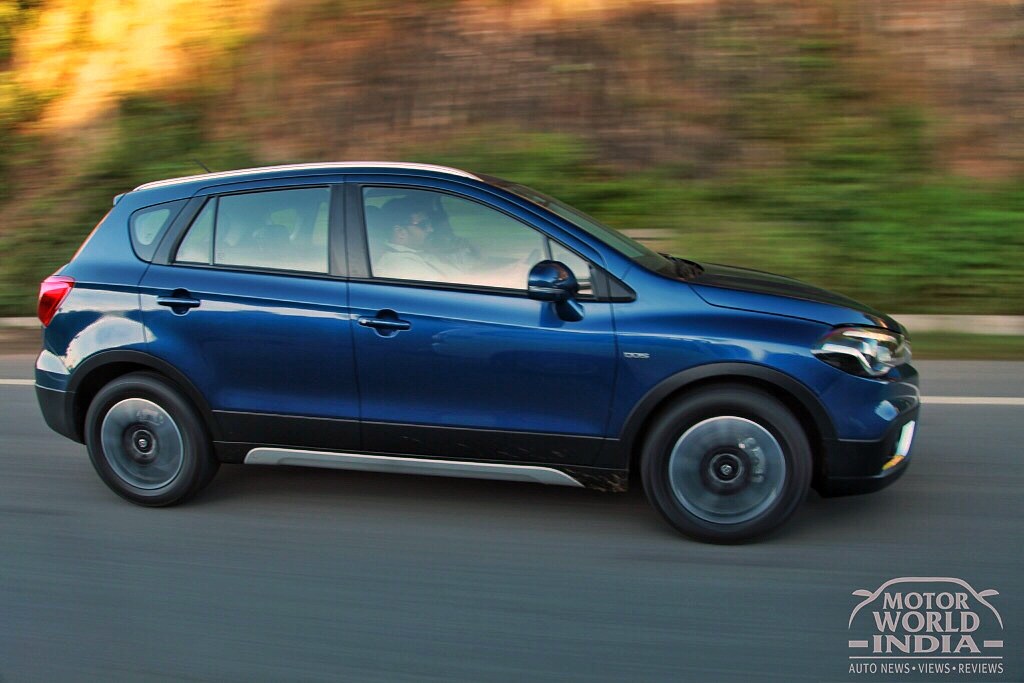 The bonnet makes its statement with assertive character lines that run upwards from the chrome grill, towards the windshield. The side profile remains more or less the same with a strong waistline running across the length of the car, the blacked out window frames and door mounted wing mirrors with LED turn lights. The wheel arches come with protector inserts in unpainted fiber material and the running board also continues to get the fiber protection with a tinge of silver on it. What’s changed on the side profile is the roof rails have now gone black and the tyres have gone beefier with the addition of all new design machine-cut alloys coming in. The 2018 S-Cross drives on 215/60 R16 sized JK Tyre UX Royale tubeless tyres mounted on dual tone (black-silver) sleek looking multi spoke alloys. 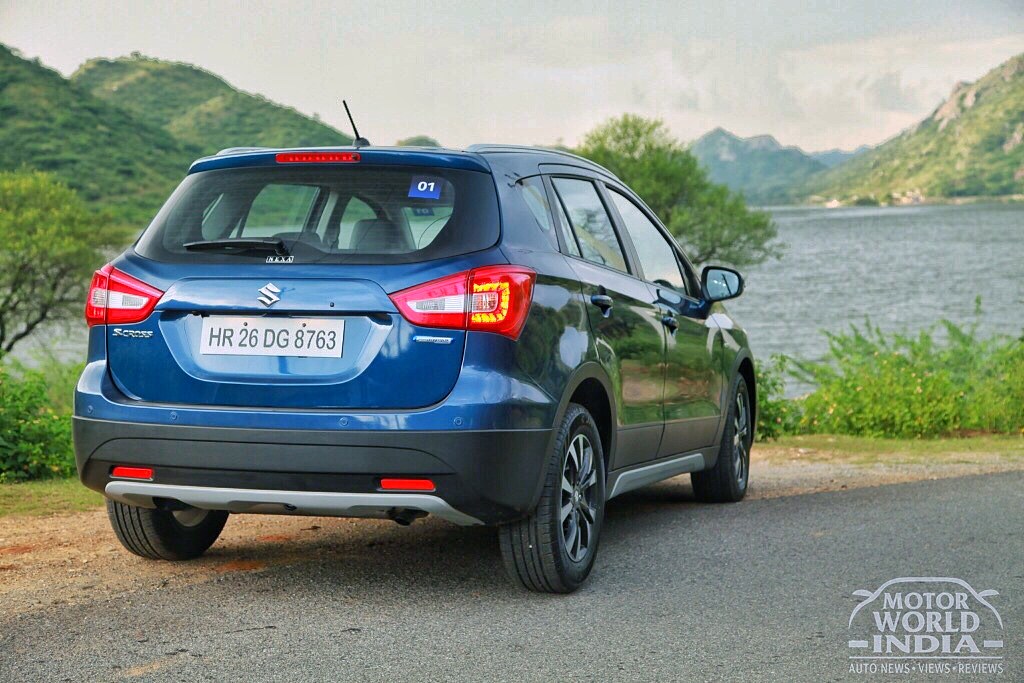 The rear profile gets fresh updates in the form of the redesigned tail lights that now have a redesigned C shaped LED glow. The rear bumper with an integrated faux skid plate and tailgate remains the same. The boot lid gets Smart HYBRID badging on it along with an integrated spoiler with high mounted LED brake light. The roof retains the radio antenna mounted on it. 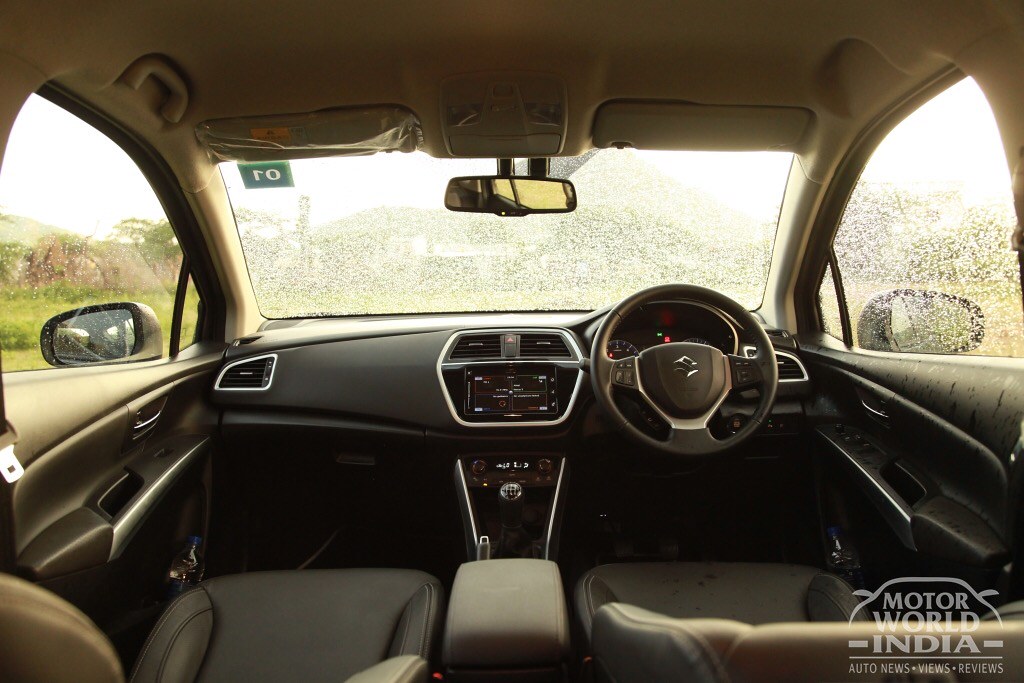 On the inside, the S-Cross continues with the premium, well crafted and spacious interior. The black theme is carried forward and still looks appealing. The soft touch dashboard along with hexagonal center console and round dials on the instrument cluster looks nicely laid out. The instrument cluster comes with twin round dials with Smart Hybrid inscribed on the speedo meter dial and TFT screen placed between the dials that displays the multi function readings. 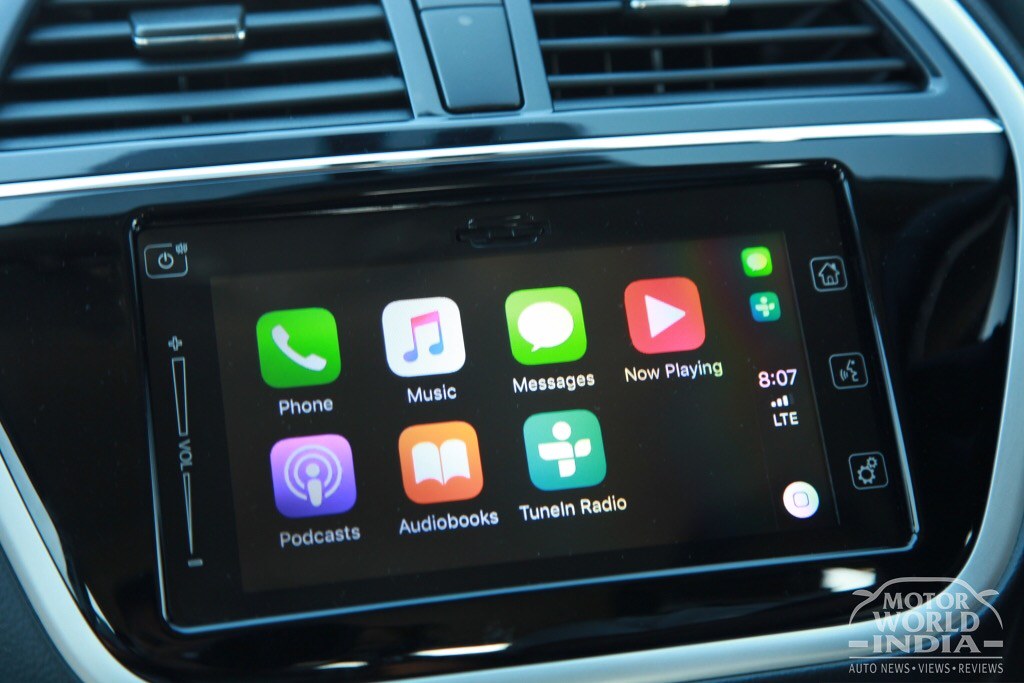 The center dash comes with the Smartplay touchscreen infotainment system that connects to Android Auto, Apple CarPlay, plays music and also has navigation in it and also doubles up as the reverse camera screen. The three spoke leather wrapped steering comes with manual height adjust and adjust for reach. Multifunction control buttons, cruise control buttons are on it. 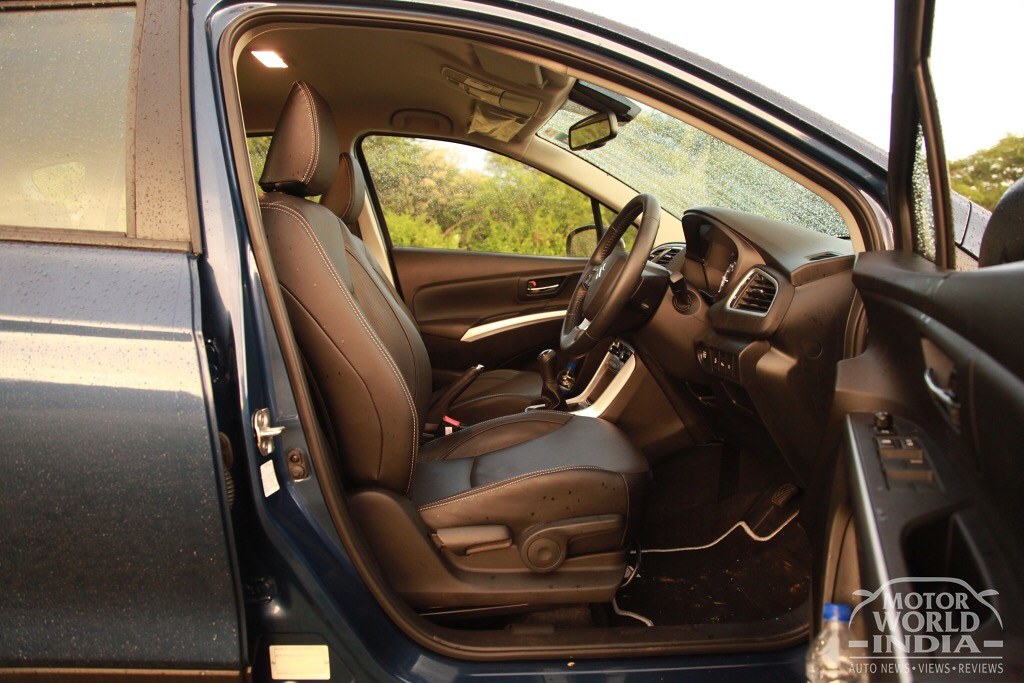 Seats come in all black leather upholstery with the drivers seats retaining the manual adjust for height. Rear seats come with two manual adjust head rests and foldable arm rest. Air con unit is the same single zone unit that works very efficiently. Added features like rain sensing wipers and automatic headlights add on to the overall package. The trademark abundant space and extremely comfortable seating., legroom, headroom and the under-thigh support is good too. The S-Cross comes with a boot space of 375 litres, with a good, easy loading area. The rear seats can be folded down in 60-40 split configuration to increase the boot area if needed. 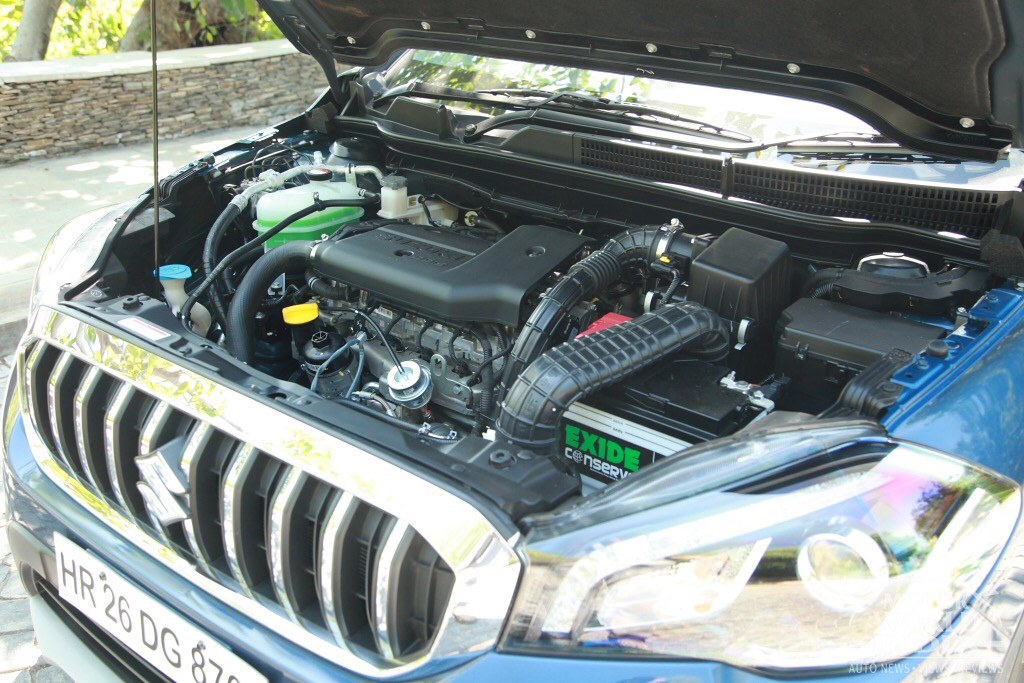 The outgoing S-Cross had 2 diesel engine options in 1.3L DDiS and 1.6L DDiS. The 2018 S-Cross will only come with the heavily tried and trusted 1.3 DDiS Diesel engine (89bhp and 200nm torque) now added with the smart hybrid system on it. Suzuki has something called as the SVHS (Smart Vehicle Hybrid System) that intelligently works in idle stop start of the engine and brake energy regeneration, when brakes are applied along with integrated starter generator motor, which has a inbuilt mild torque assist function, for improving acceleration. Not forgetting the boosting of fuel efficiency by around 2kmpl overall due to this SVHS feature. The proven 5 speed manual shifter does a splendid job as always. 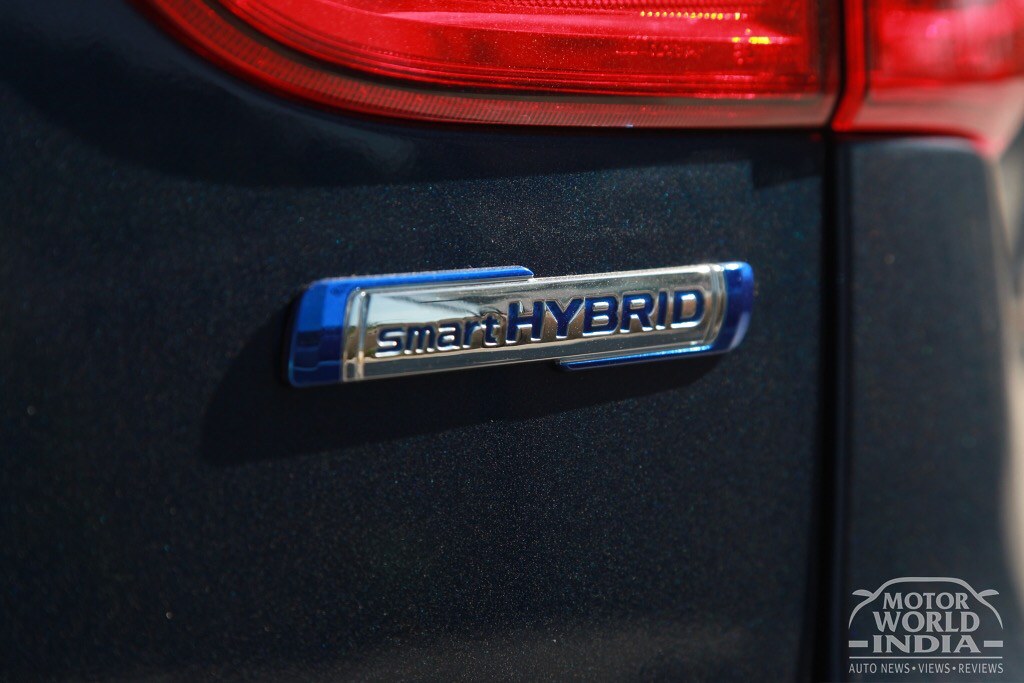 The power delivery is quick after the 1900rpm, this is when the turbo kicks in and the Fiat sourced gem of an engine shows its true colors. Gear shifts are smooth and the EPS steering feedback is lively. Engineers from Maruti Szuki tell us that the steering and the suspension both have been tweaked to suit and balance the upsized wheel specs. Seating position is near perfect for this tall vehicle, and the driver gets a bird’s eye view. Braking is precise and sharp-aided with the all disc setup along with ABS and EBD. The ride quality is fantastic and it’s fun to drive the S-Cross at high speeds, as well as slow speeds on busy roads. 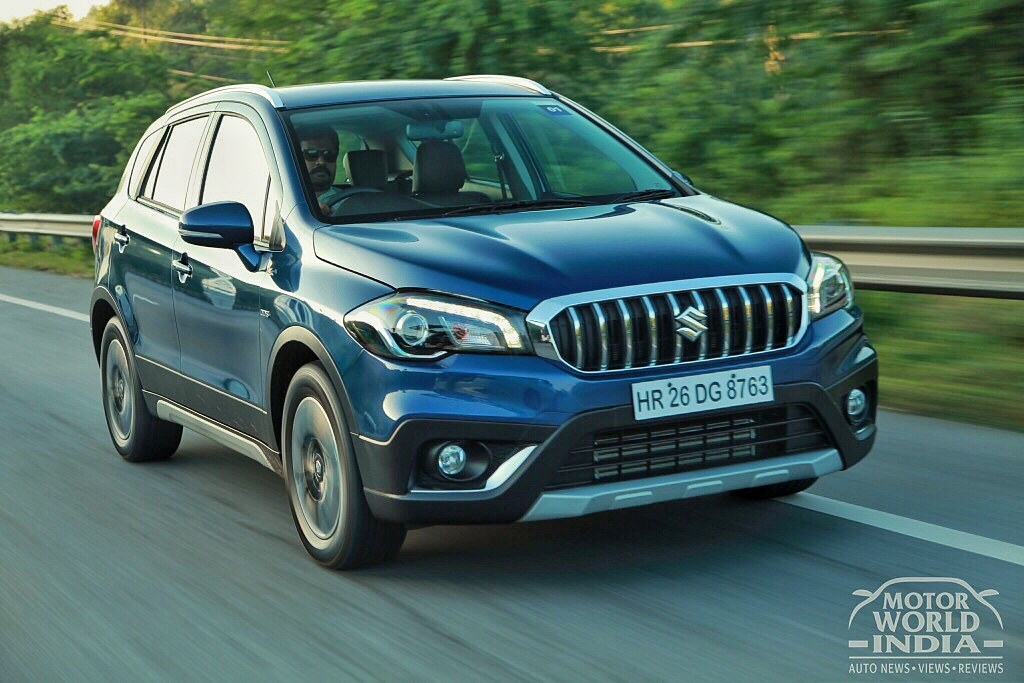 The 2018 S-Cross becomes the flagship model from Maruti Suzuki and rightly so, it conquers all turfs in terms of looks on the outside and practicality and space on the inside. The cosmetic changes not only boost the image, but also make it a lot more desirable now. Flawless engine and gearbox along with a silky smooth ride quality give it more appeal. The 2018 S-Cross wins hands down in terms of after sales and service and not forgetting resale value, as it hails from the house of the most trusted car brand of India – Maruti Suzuki. 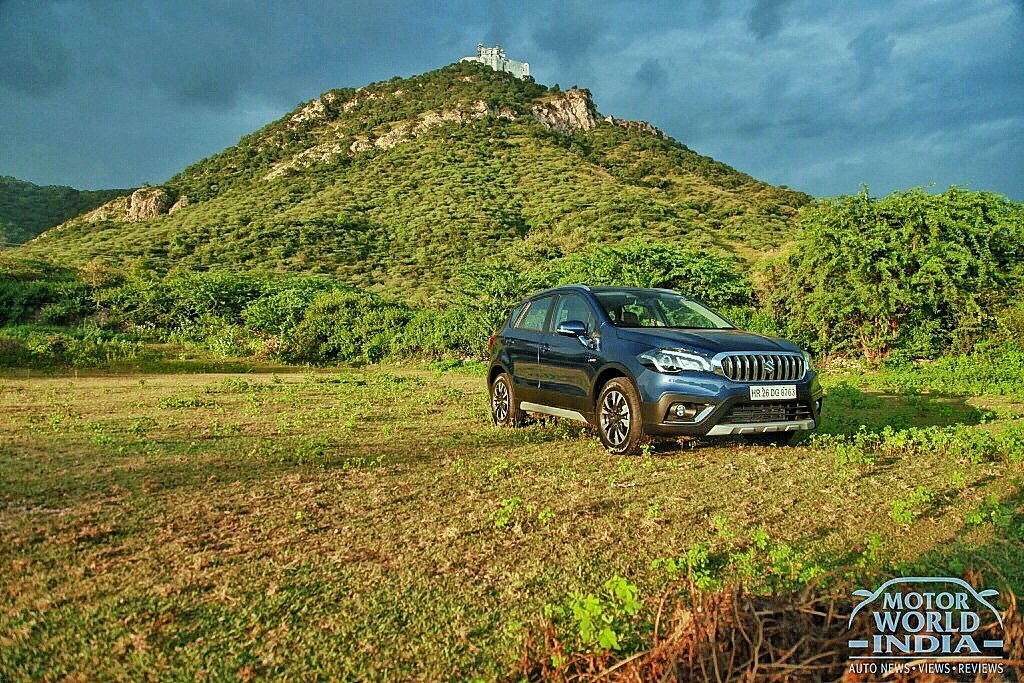 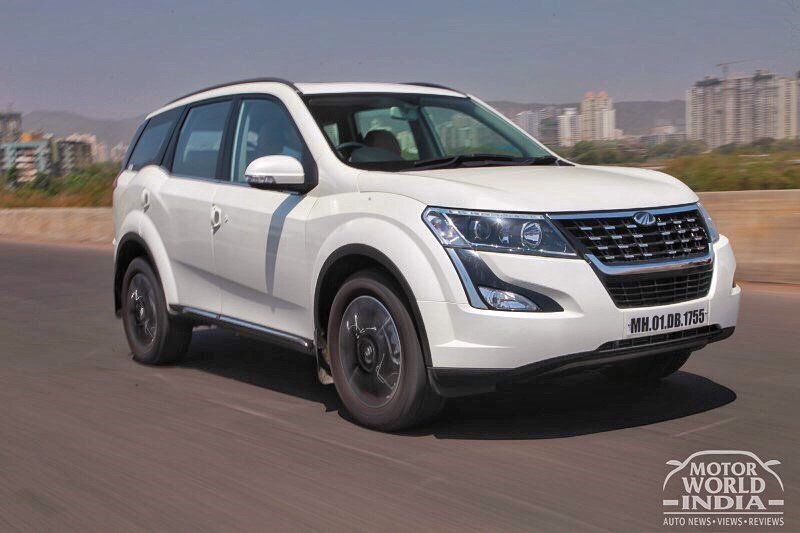 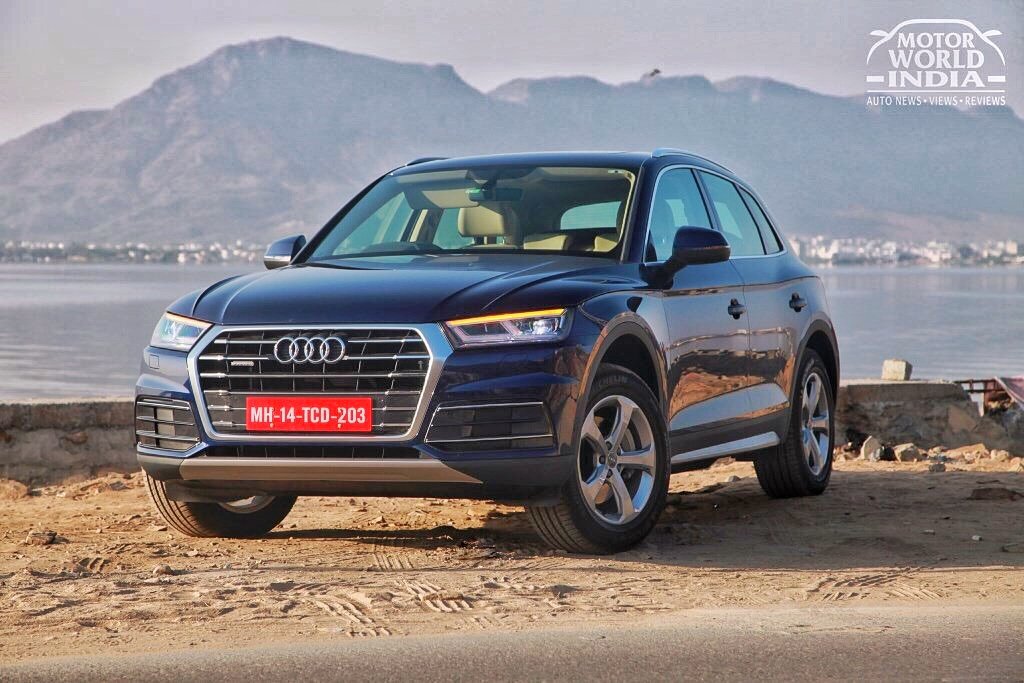 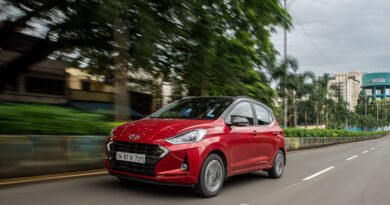