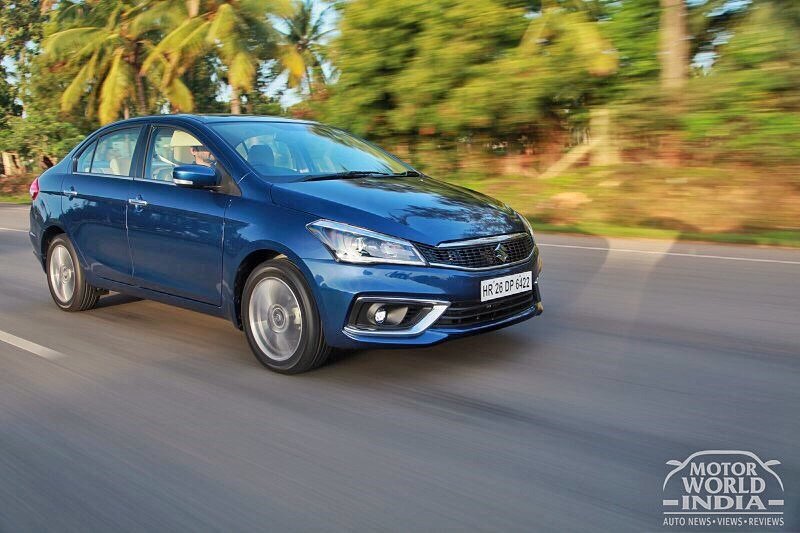 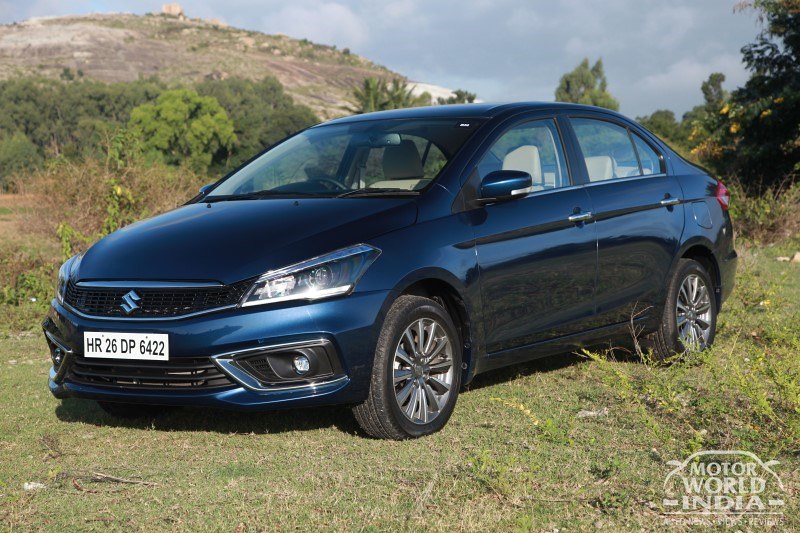 Launched in 2014, the Maruti Suzuki Ciaz has sold over 2,20,000 units so far. The Ciaz has a handsome market share of 34% in the segment, where it rivals the likes of the Honda City, Hyundai Verna, Skoda Rapid and the Volkswagen Vento along with the newly launched Toyota Yaris. The Ciaz was beginning to show its age and it was about time Maruti Suzuki did something about it. The 2018 Ciaz has the right formula that the Indian car buyer looks for in a sedan. We try to find that out in our detailed roadtest review after driving it extensively in and around the Garden city of Bengaluru. 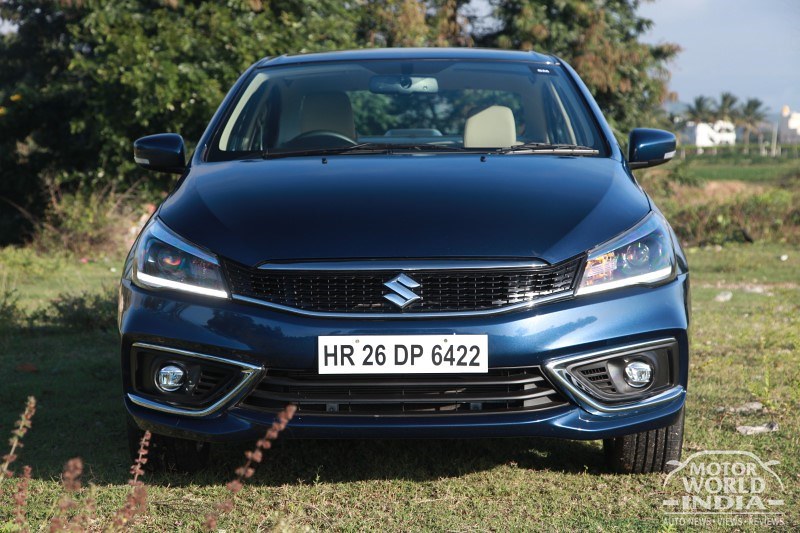 The basic design of the New Ciaz more or less remains the same with some significant updates given to the front and rear of the sedan. The face gets an all new grill which gets chrome surrounds with mesh design grill in glossy black. The car also gets a segment first sleek and contemporary LED projector auto headlamp with DRL in them. The bumper also gets an all new styling with elegant chrome bezels surrounding the white LED fog lamps. The sides remains more or less the same in styling except for the new 16 inch precision cut alloy wheels in dual tone metallic pebble grey finish. Coming to the rear, the New Ciaz gets all LED combination tail lamps. These new style LED tail lights remind a lot of the BMW 3-series and look very premium on the car. The rear bumper gets redesigning and elegant chrome bezels that finishes the overall look. The boot lid now gets the Smart Hybrid badging instead of the SHVS badge on the older Ciaz. 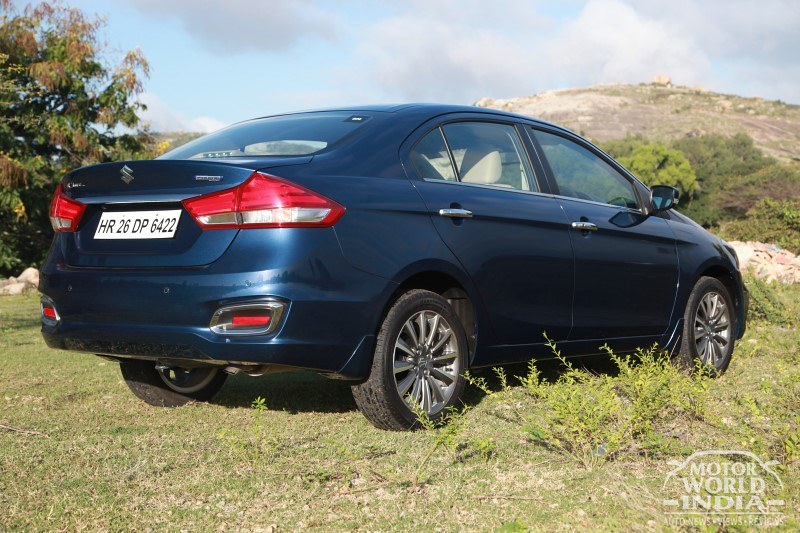 On the inside, the New Ciaz gets loads of equipment add-ons that surely boosts its premium appeal. The dual tone dash styling remains the same except for the faux wood inserts that came on the older one, now being replaced by the new Birch Blonde Wood Grain accents in matt finish. The all new instrument cluster comes with a 4.2inch color multi information TFT display that is also seen on the Baleno, but this one has the latest version with advanced features on it. For instance, the eco illumination in the speedometer that dynamically changes color based on driving pattern…from white coasting to green while driving economically to blue while driving fast. The MID reads out all the required drive information and also shows the charge pattern of the smart hybrid in real time. Bright blue needles on the cluster add a lot of glam factor to it. The New Ciaz also gets ISOFIX compliant seats. The Upholstery is in all leather, while the infotainment system remains unchanged which is compatible with Apple CarPlay and Android Auto, along with all the needed connectives to USB, Smartphones etc. The New Ciaz also get a manual sun blind on the rear windshield for the rear passengers. The cabin boasts of loads of space, while the front seats offer good support for the back, under thigh support could have been better. Rear seating is at its best with loads of leg room, shoulder room and adequate headroom. 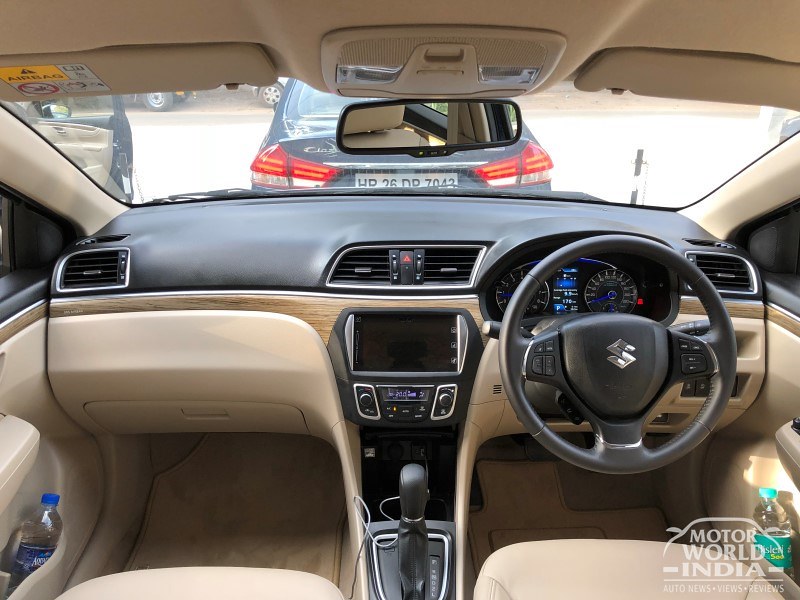 The New Ciaz is available in petrol and diesel engine options. The all new 1.5 litre K15 engine makes its first appearance here, while the diesel option remains the tried and trusted 1.3 litre DDiS engine.

The highlight of the New Ciaz is the K15 engine which is a 1462cc 4-cylinder unit with 105HP at 6000rpm and churns out a healthy 138Nm of torque at 4400 rpm. This engine is mated to a 5-speed manual transmission and a 4-speed automatic torque convertor transmission. 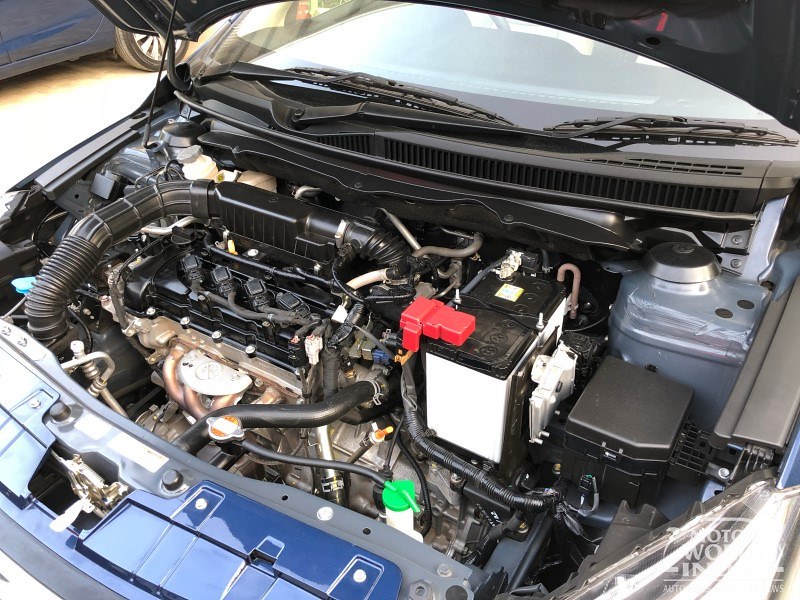 Maruti Suzuki have included the latest generation Smart Hybrid system on the New Ciaz for both petrol and diesel engine options and is standard across all the trim levels. The Smart Hybrid System now gets new Lithium ION battery that gets charged while decelerating and under braking conditions. This system intelligently turns off the engine while everything remains working, including the air conditioner and the electrical, thus saving precious fuel during start stop traffic. Maruti Suzuki claims 21.09kmpl of fuel efficiency on the Ciaz Petrol, while we could extract a healthy 13.5kmpl during our test. 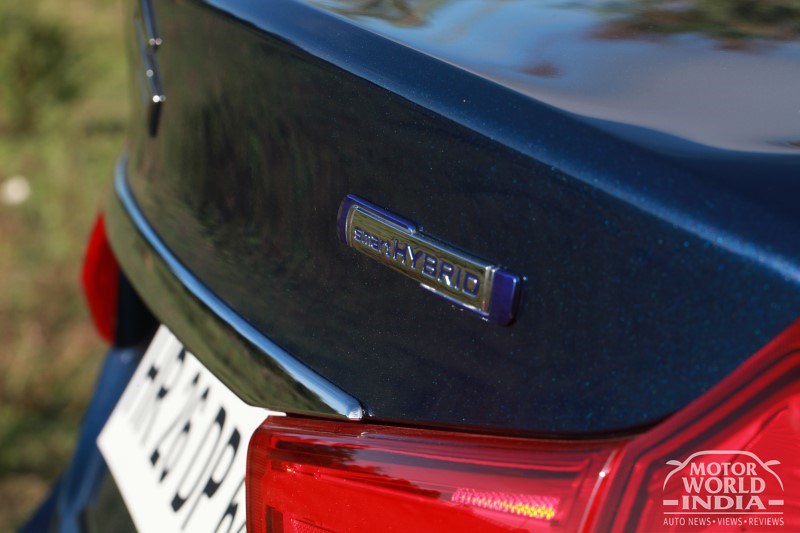 On the move the automatic transmission is a boon to drive in choc-o-bloc traffic. But it goes out of breath when it comes to overtaking on the highway. Not that it’s a problem, but you have to be very calculative when it comes to overtaking maneuvers. The car is uber responsive at intermittent speeds and accelerates with eagerness to move forward. Manual transmission is our choice when it comes to sheer driving pleasure. The gearshift is slick to say the least, the clutch is light and progressive. The car lunges forward in any and every gear at any given speeds. The 138Nm of torque is wide spread, which automatically translates to better in-gear acceleration. We could manage to reach speeds of almost 170 kmph on the Bengaluru-Hyderabad highway. 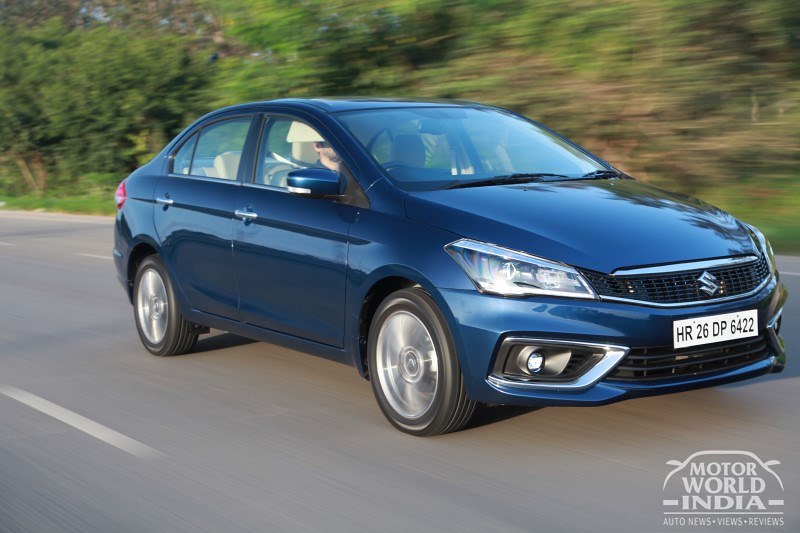 The car was rock steady even at such high speeds. Braking needs special mention as it did an excellent job of bringing the Ciaz to a standstill at any given speeds without much drama. Sadly, the New Ciaz skipped on giving the rear disc brakes even on the top-end automatic variant. The cabin remained silent throughout our drive and kept us well isolated from the outside world, enhancing the overall drive quality. 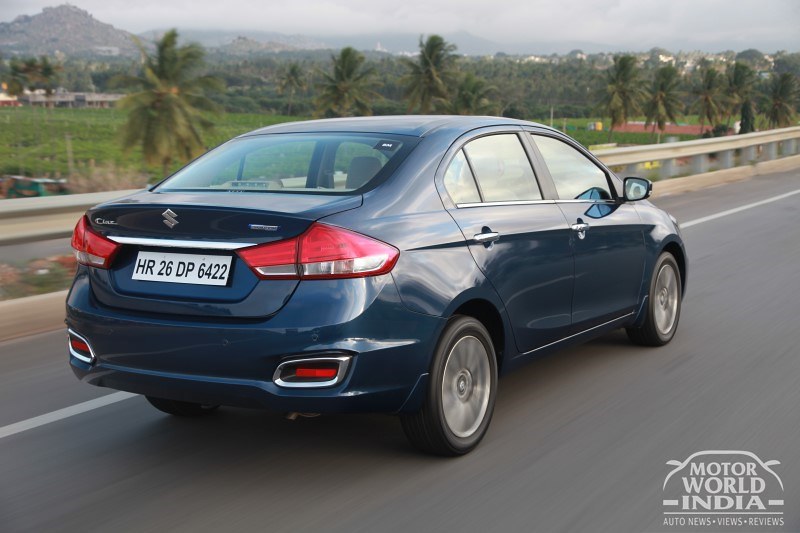 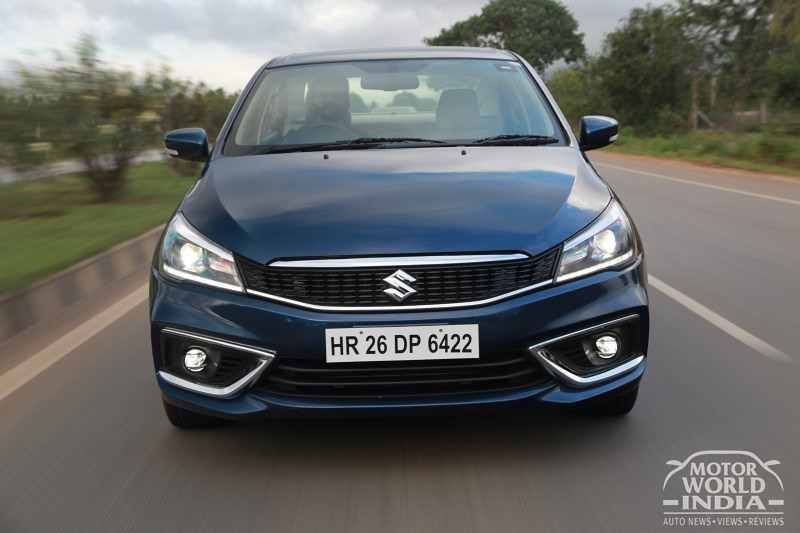 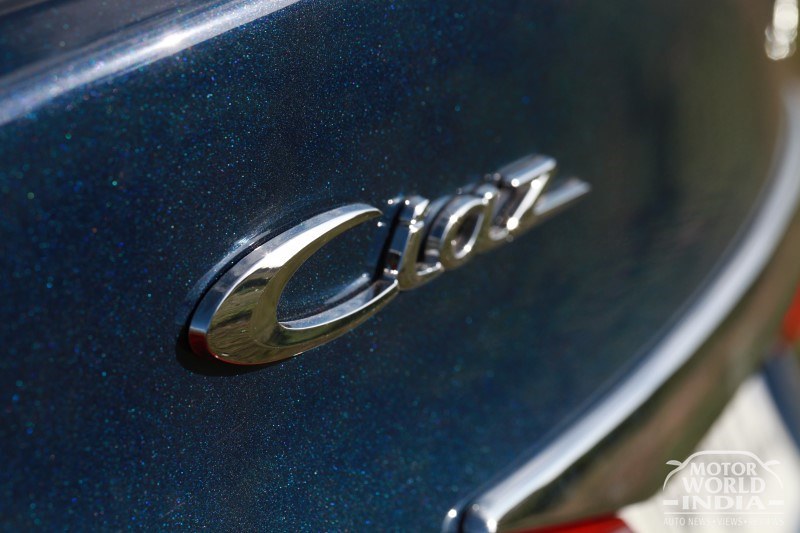 The Ciaz was always a very strong product coming from India’s no.1 car manufacturer and this update makes it stronger and more premium. Loads of convenience, comfort and safety features are now added to the feature list. Along with the all-new K15 petrol engine and loaded with the latest generation Smart Hybrid System making the Ciaz a very practical and wise car model to be considered in the segment. Not mentioning the price benefit which undercuts the entire segment making it a sweeter deal to own, not forgetting the bulletproof after-sales and service and resale value that the brand is known for. 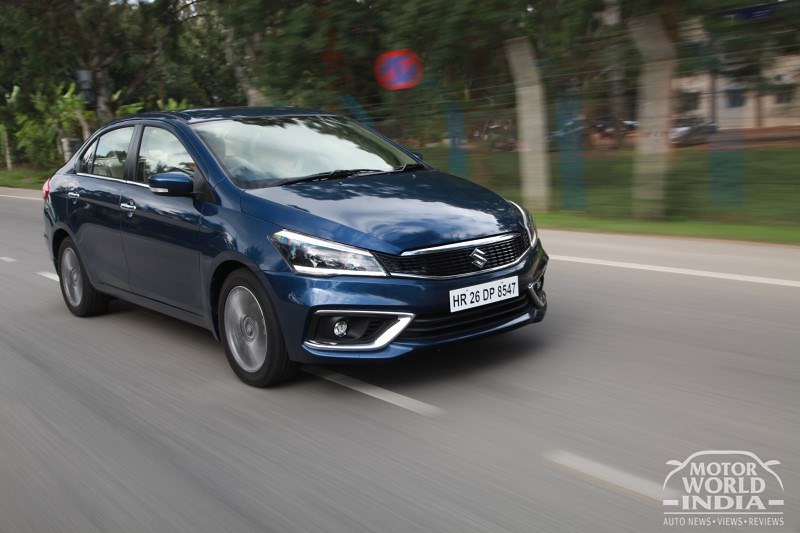 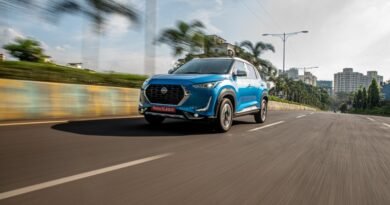 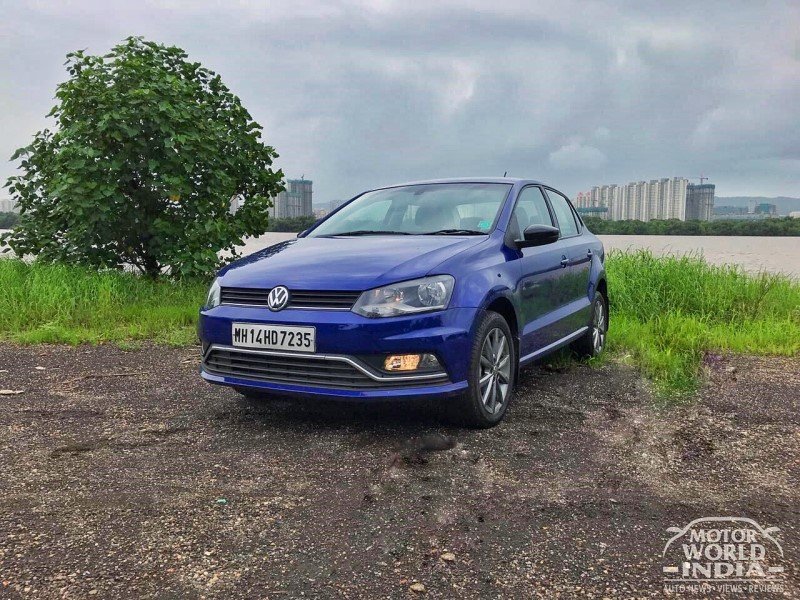 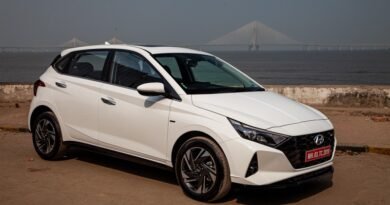